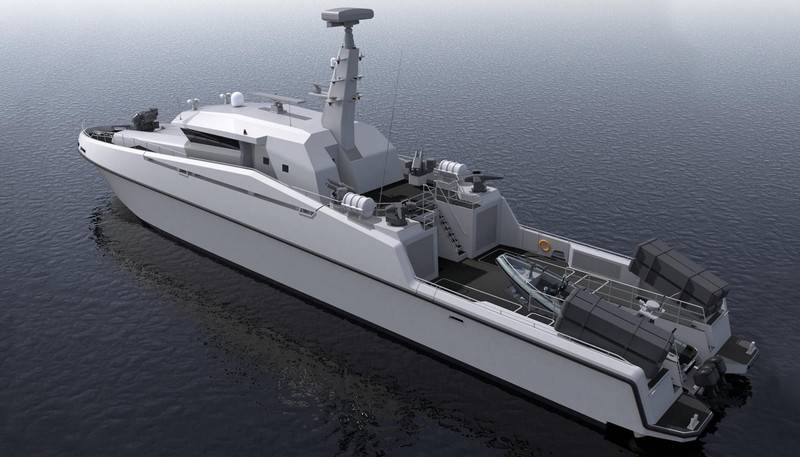 Probable variant of the British project of boats for the Navy

The missile boats, which Britain intends to build for Ukraine, are proposed to be equipped with Norwegian Naval Strike Missile (NSM) anti-ship missiles, and not Ukrainian anti-ship missiles "Neptune". This is reported by the Odessa edition "Dumskaya" with reference to its own sources in the Ukrainian Navy.

According to the newspaper, the British company BMT agreed to finalize the proposed project of missile boats, taking into account the wishes of the command of the Ukrainian Navy. In particular, it is reported that the engine will be transferred in the new project. In addition, it is proposed to install the Norwegian NSM anti-ship missiles on the boat, which are in service with the US Navy, Great Britain and a number of NATO countries.

At the same time, it is argued that the British are ready to deliver the first boat to the Ukrainian Navy in a year after the signing of the contract. At the same time, Ukrainian projects that exist only on paper will take a very long preparation time before construction, subject to adequate funding. In addition, there is still no naval version of the Neptune anti-ship missile system.

(...) it takes at least 5 years to create the first boat according to a domestic project: eight months for design, about two years for the development of drawings and technical documentation, and another two years for implementation in metal. And this is subject to stable funding. And as shown by many years история with the launch of the rocket "Lani", there will be no money
- writes the edition.

At the same time, London offers Kiev to build eight boats with funds allocated as a loan for 10 years. In addition, the localization of production is envisaged in Ukraine.

The NSM anti-ship missile was developed by the Norwegian group Kongsberg, produced in the United States as part of a joint venture with Raytheon. A two-stage subsonic anti-ship missile with a range of 185 km. Length - 4 m, weight with container - 710 kg, warhead weight - 120 kg.

Ctrl Enter
Noticed oshЫbku Highlight text and press. Ctrl + Enter
We are
Reports from the militia of New Russia for 27-28 September 2014 of the yearYuri Drozdov: Russia prepared the role of the sacrificial calf
120 comments
Information
Dear reader, to leave comments on the publication, you must to register.