How the West enslaved the planet 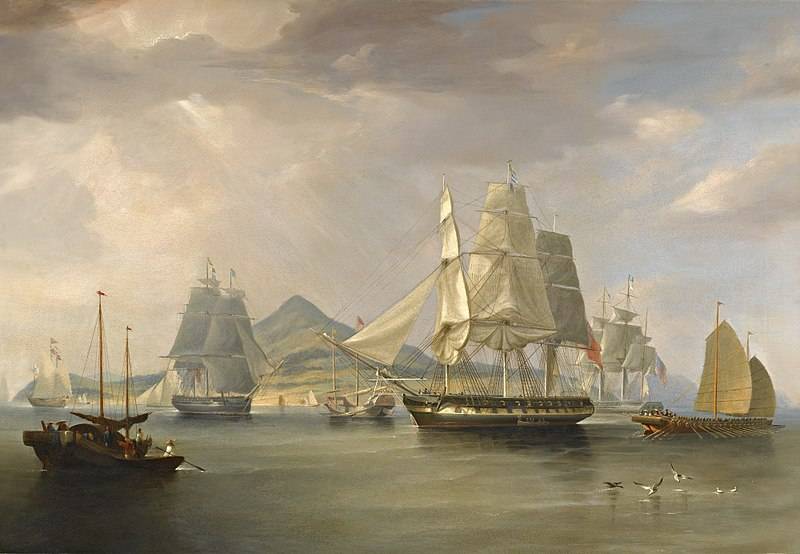 Opium ships off Lindin Island. 1824 year. From a painting by W. Huggins

As a result of the great geographical "discoveries" and migration flows directed from Europe to America, the modern West was formed - the ethnopolitical unity of Western Europe and America. The Western world extended its rule not only to the Atlantic, but to the Indian and Pacific oceans. The West had pronounced negative features. In essence, the Atlantic civilization is a world of ghoul vampires, pirates and marauders. Its goal is to conquer, plunder and enslave other worlds. Most often, tribes, nationalities, cultures, countries and civilizations that are invaded by European predators quickly degrade and die. If the Eurasian land civilizations and empires, such as Russia (before that the Horde and Scythia) have always been hierarchical, popular-monarchical systems that preferred creation to destruction, then the marine civilization of the West has always treated its colonies, overseas provinces, as an external object of consumption. There is a metropolis and a colonial periphery. In relation to the conquered lands, the metropolis always plays the role of an anti-system. The "victim" is disorganized, demoralized, destroyed and sucked dry.

Western "discoverers" (lands in Africa, Asia and even in America were already known during the ancient world), "merchants", pirates and slave traders were able to colonize entire continents. At the same time, the civilization of the West was able to achieve this not because of its cultural or economic superiority, as they are now trying to imagine. The ancient cultures and civilizations of the East had a more developed and ancient culture, art, science and no less (and perhaps even more) developed economy. In particular, Europe's trade balance with Asia was not in favor of the Europeans until the middle of the XNUMXth century. But the maritime powers of Western Europe had a superiority in weaponssupplemented by unprincipled political foundations, methods of warfare and trade. The Christians of Europe viewed the natives not as people, but as wild animals that can be robbed, raped and killed with impunity and shamelessly, seizing "living space". Suffice it to say that even at the beginning of the XNUMXth century, representatives of the indigenous peoples of America, Africa or the Pacific Islands could be seen in zoos in Western Europe.

The Indians of America were infected with general diseases, they were drunk with "fire water" (taking advantage of their lack of an enzyme that processes alcohol), pitted against each other (taught to get scalps for money), poisoned with dogs, driven from their lands and killed. Africa was deprived of a significant part of the population, exporting blacks to slave markets. In order to hack the markets of Asian countries, which could not be penetrated in an honest way by low-quality goods of the "developed" West, the Atlantic pirates used low methods: they began with the trade in slaves and drugs. Few people know about this, but it was these two articles that formed the basis of the exchange of goods between "enlightened" Europe with the countries of Asia up to the First World War. True, the slave market, which flourished in the XNUMXth - XNUMXth centuries, was saturated and generally faded into the background in the middle of the XNUMXth century. England, which dominated the drug market, became the "workshop of the world" and flooded the planet with its goods, itself covered up the slave trade. Crushed competitors with her fleet, ostensibly in the name of "humanity". The slave trade remained on the periphery or acquired more "civilized" forms. For example, masses of poor people were imported from Europe to America: Irish, Italians, Chinese, whose position practically did not differ from that of a slave. 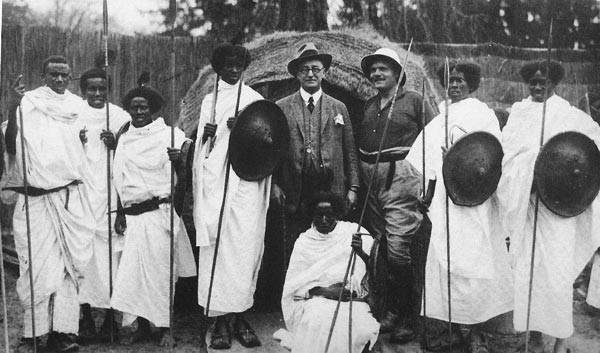 At the same time, the role of the drug market has not only decreased, but, on the contrary, increased. Already at the end of the 1000th century, the British East India campaign switched from the export of opium (from South Asia to the East) to its production. The capitals formed in this way (the drug trade gave income up to XNUMX%) were invested in the industrial revolution. England has become a world leader in industry. The British managed to flood the South Asian market with their goods after the capture of India and the direct destruction of local industry through monstrous taxes. Which led to the death of tens of millions of local residents. The main source of income continued to be the opium grown by the British in India and sold in China.

Interestingly, the West did not abandon the super-profitable drug trade in the 2001th and early 30st centuries. In the middle of the 185th century, local crime syndicates with the support of the global "elite" created the Golden Triangle zone (in the mountainous regions of Thailand, Myanmar and Laos) as a system for the production and trade of opium. It received additional development during the Vietnam War, when the American special services joined in. Another drug market under the control of the US intelligence services was created in South America - the production and sale of cocaine. One of the indirect goals of drugs was to destroy the spiritual, intellectual and physical potential of the "colored" minorities in the United States. True, the white majority also underwent rapid degradation. Another drug market (production of heroin and opiates) is the so-called "Golden Crescent". The territory of the border regions of three countries - Afghanistan, Iran and Pakistan. There are huge plantations of opium poppy and large production of drugs. In XNUMX, the Taliban government banned the cultivation of opium in Afghanistan, resulting in the country's production of opium, a record low in XNUMX years (only XNUMX tons), during this period. However, after the occupation of Afghanistan by NATO, production increased sharply again. Afghanistan (under the control of the Anglo-Saxon intelligence services) has become the largest drug producer.

Drug abuse in China and the entire planet

The production of drugs caused the destruction (like the British goods that flooded India) of India's industry, which led to the mass death of local residents. Through the efforts of the British colonial administration and traders, the drug epidemic swept India and Malaysia. Then the British began to enslave China with the help of drugs. The trade of European countries with China became permanent already in the XNUMXth century. Tea, which became popular in Europe and America, silk, porcelain and works of art (they were in fashion) were brought from China. All this was profitable for the merchants. But the trade balance was in China's favor. The goods had to be paid in silver. In addition, the Chinese Empire was a closed country, there were few free trade zones. Foreigners could only trade in Canton. The number of Chinese merchants who could contact foreigners was limited. And the Europeans, especially the British, wanted to capture the huge Chinese market.

Opium became the "golden key" to the Celestial Empire. Already at the beginning of the 20th century, opium addiction in China became a national disaster. The people were rapidly degraded. Vital forces and means flowed from the Celestial Empire to the West. The government tried to fight the infection, but to no avail. Trade went underground, it was covered by corrupt and intoxicated officials (up to 30-1835% of officials were drug addicts), it was beneficial to the compradors. Already in 1840, opium made up the majority of the imported goods into China, many millions of people became drug addicts. The imperial power tried to give a decisive battle to this evil, to suppress the criminal trade. However, England did not allow the Chinese authorities to save the people. The British hacked the Chinese market by force: The First (1842-1856) and Second (1860-1911) Opium Wars. The British got permission from the Chinese government to free trade in opium, the volume of which increased dramatically. The Chinese people are hooked on drugs. This led to a gigantic spread of drug addiction among the Chinese, spiritual, intellectual and physical degradation, as well as to the mass extinction of the population. The defeat in the war with the West caused the most severe turmoil in the Celestial Empire, a civil war that killed tens of millions of people. The Chinese empire was dying out from drugs until the Xinhai Revolution of XNUMX, when the Qing dynasty was collapsed. After that, the Kuomintang and communists fought the drug plague for several decades, suppressing it with the most brutal methods.

Intoxicated China has become a semi-colony of the West. His silver and other riches (including priceless objects of millennial civilization) enriched the West, mainly England. The British Empire was flooded with "big money", which was invested in the development of industry. England has become the "workshop of the world." And her wealth was protected by the most powerful fleet in the world. The Victorian era (1837-1901) came - the time of prosperity of society (its top), the century of the highest economic, political and ideological power of Britain. 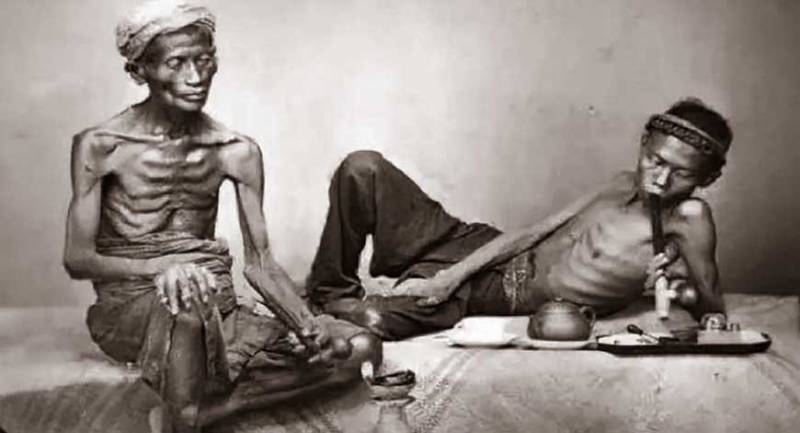 The wealth of the European countries and peoples did not go for the future. The common people continued to be severely exploited. Drug addiction began in Europe itself - both the elite strata and ordinary hard workers. The lot of ordinary people in Europe and the United States has become a monstrous poverty unprecedented in the "backward" societies of Asia. Deprived of land, property, dying of poverty and hunger, people were either forced to go into mercenaries serving the interests of the colonialists, like the giant drug cartel - the British East India Company. Or become practically powerless colonists in America or Australia, massacring local aborigines. Either become a part of the underworld, the "bottom" of big cities, risking getting on the rack at any moment or going as a "runaway slave" to the colonies.

By the end of the XIX - beginning of the XX centuries. in the West, a plutocracy (domination of the rich) and a financial oligarchy are emerging, claiming power over the entire planet. The old systems for supporting social ties (a strict hierarchy from the aristocracy to rural communities) have undergone total destruction. There was a process of destruction of the aristocratic folk societies of the Aryan (Indo-European) type and its replacement by mercantile-usurious capitalism. The last strongholds of the old societies were the Germanic and Russian world - the German, Austro-Hungarian and Russian empires. Their mercantile West (financial capital) destroyed during the First World War (World War I - the perfidious war of Great Britain and the United States against Russia and Germany).

Thus, piracy, looting, slave trade and drug trafficking have laid the foundation for the modern material well-being of the West. This dirty money allowed for "initial capital accumulation", the industrial revolution and the transition to capitalism. Moreover, the system built on this foundation was "dirty" in every sense. By the end of the XNUMXth century, the results were clear. Western drug traffickers poisoned the whole world, now a significant part of Europe and America is on drugs. Once "enlightened" Europeans sold people all over the planet. Now Europeans and Americans themselves are involved in the slave market (including the sex industry). Once European pirates and marauders terrified the tribes and peoples of Africa and Asia. Now millions of "colored" migrants (against the background of the extinction of the white race) are gradually turning the Old World into a multicultural "Babylon" or even a "Caliphate". The rotting of the Western world has led to global systemic destruction. Manufacturing has led to a global environmental crisis. The consumer society, satisfying the base and most often meaningless, constantly growing needs of people (degradation and parasitic needs), led to the fall and involution (simplification) of man and mankind. The planet was engulfed in a systemic crisis, which is now developing into a general catastrophe.

Ctrl Enter
Noticed oshЫbku Highlight text and press. Ctrl + Enter
We are
Chernobyl notebook. Part of 3The hunt for the Blackbird
160 comments
Information
Dear reader, to leave comments on the publication, you must to register.