Dayton Accords as an American "product". To the 25th anniversary of the signing 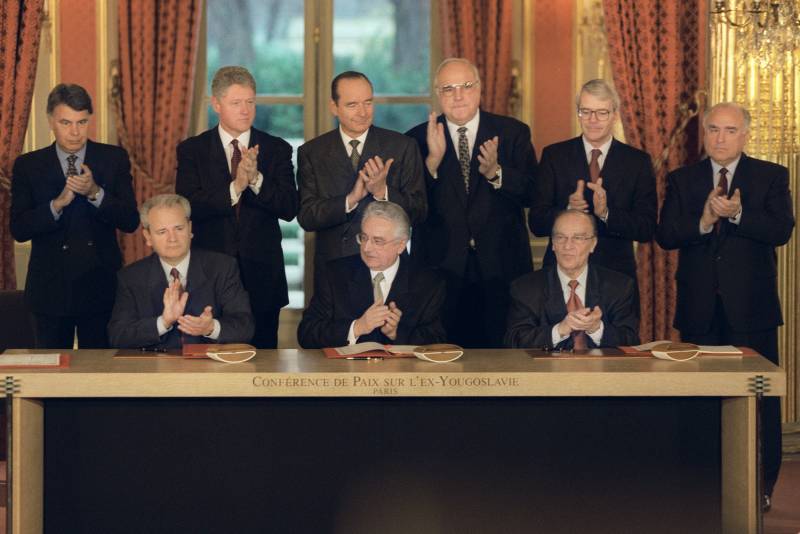 A quarter of a century ago, agreements were signed at the US Air Force base located in Ohio, which at that time were considered participants in the negotiation process that ended there as an end to the Bosnian war. In fact, it was only a respite, followed by equally bloody events in the Balkans. Moreover, the system laid down in Dayton has become for the Bosnia and Herzegovina it spawned, a path to a dead end, from which there is no way out. Everyone wants to change the situation, but no one knows how to do it.


The agreements, in the signing of which, in addition to the representatives of Croatia, as well as Bosnia and Herzegovina, were attended by representatives of the United States, Germany, Britain, France and Russia, were developed and approved without any participation of one more party - the Bosnian Serbs. According to them, Serbs, Croats and Bosnians, who categorically did not want to give up even a fraction of their own "autonomy", were "squeezed" into one state. Ultimately, the country turned into something completely unimaginable ...

Its political system is an ideal illustration of the famous fable about the crayfish, the swan and the pike - after all, the local parliament, the Skupschina, is elected by one third from the representatives of the Serbian autonomy, and two thirds from the Croats and Bosniaks who are members of the federation. At the same time, the so-called "veto of the people" makes it possible to firmly block any decision if it does not suit the deputies representing at least one of these ethnic groups. The top leadership of the country is exercised by the Presidium, which is again a triumvirate formed according to the same principle.

The fact that the Dayton system has outlived its usefulness is recognized even in the West, including in the United States itself. Bosnia and Herzegovina aspires to become a member of the European Union, to which it has already applied for membership. However, in May last year, the country was made clear: until “progress is made” in at least 14 areas of its life, including the judiciary, corruption and public administration, there will be no question of joining the “European family”.

There will be no progress either, if only because of the weakness of the central "government", which has no real influence on many key areas of the country's life, since any decision must be agreed with the authorities of all national entities. With NATO, which is now the target for virtually any country in Eastern Europe, the situation is even more complicated. And here there is already a problem in the Bosnian Serbs, who in general are categorically unwilling to join the North Atlantic Alliance. Moreover, the representatives of this people would with great pleasure put an end to the Dayton system - but in order to gain independence from the "union" imposed on them.

In any case, Milorad Dodik, leader of the ruling party in the Serbian part of the country, the Alliance of Independent Social Democrats (SNSD), Milorad Dodik, does not hesitate to say that he would not mind the complete collapse of the federation in its current form and the emergence of the Republic of Srpska on its ruins. But something like this would instantly turn into a huge problem for the Belgrade authorities, who are so afraid to do at least something without looking back at Brussels. To recognize such independence is to instantly lose all and all the prospects of the longed-for "European integration", not to recognize - to commit political suicide. For Serbia, let it be better that everything remains as it is.

The most interesting thing is that the current "suspended" state in many respects suits those who really are in power in Bosnia and Herzegovina itself. The authors of the article devoted to the problems of this country, published a couple of months ago in the EUobserver, tend to believe that “Western patronage, manifested in various forms, is being transferred to the political elites of Bosnia and Herzegovina, who, in fact, manipulate the EU and control the money that comes from there. ".

Brussels, on the other hand, is satisfied with the existing situation, which makes it possible to somehow control migration along the "Balkan route". Moreover, in order to start moving towards some kind of global changes, the European bureaucrats need to admit the erroneousness of past decisions. And they categorically do not want to do this. The economic and social problems of the state that was made of "scraps" in Dayton, the further, the more it demonstrates its unviability, worry them in the last place.

By and large, who (apart from ordinary residents of Bosnia and Herzegovina) may be interested in revising and dismantling the agreements of a quarter century ago, it is Russia. Yes, yes - in addition to the purely local significance for the Balkans, the events of that time, in fact, had profound geopolitical consequences. It was not by chance that the treaty was signed at the American Air Force base - after all, its conclusion was preceded by Operation Deliberate Force, during which aviation NATO (and primarily the United States) has dealt crushing blows to the military formations of the Serbs, making them much more accommodating.

It was from that time, from Dayton, that Washington finally arrogated to itself the right of a "European arbiter" who alone can "restore order" in the Old World, whose inhabitants are unable to do this on their own. The deal concluded within the walls of the military base of the "world gendarme" was not only the beginning of the end for Slobodan Milosevic, but also the starting point for the period when our country, let's be objective, did not decide anything at all and did not weigh in this world. These are the consequences of this shameful time and must be corrected first of all.

Today in BiH itself they say that the Dayton Agreement is an American "product". This is not a real and full-fledged agreement, but a temporary, a kind of truce, which was concluded at one time between the field commanders.

Ctrl Enter
Noticed oshЫbku Highlight text and press. Ctrl + Enter
We are
A great interview with Sergey Lavrov: about Ukraine, Obama and IranWhat you didn't want to know about England