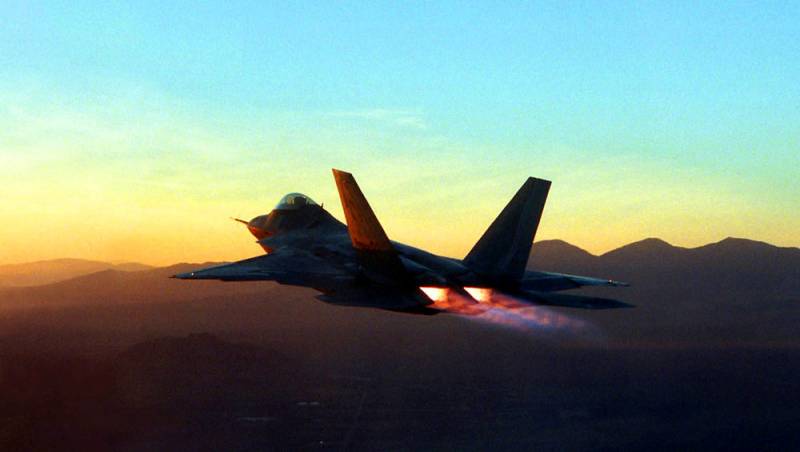 Undoubtedly, one of the most notable and significant for the expert analysis of the military-political events of the past week was the announcement by the Israeli, Greek and Arabian news agencies, citing competent sources, that the Defense Ministry and the administration of the current US President Donald Trump approved the request of the Israeli Defense Ministry for the purchase of an unnamed number (probably, we are talking about one squadron of 24 aircraft or an air wing of 48 units) of the 5th generation F-22A "Raptor" multi-role fighters as part of the renewal of the aircraft fleet and increasing the combat stability of Hel Haavir in the Western Asian conventional theater of operations.

The most piquant nuance in this situation is that the "green light" for the conclusion of the corresponding contract between the Pentagon and the Israeli Defense Ministry was provided by the Trump administration in a fairly short time, despite the bill ratified by the US Congress back in 1997 and prolonged in 2007, providing for the imposition of an embargo on export sales of the F-22A through foreign military sales (FMS, - "Foreign Military Sales") in order to avoid leakage of critical technologies of these machines. Apparently, this time the majority of votes in favor of lifting the embargo was achieved under the impressive pressure of the Israeli lobby, which is making certain adjustments to the activities of both the Senate and the House of Representatives.

In view of the above circumstances, the following question arises: what provoked such a zealous interest of the Israeli Defense Ministry in the F-22A Raptor multifunctional fighters, as well as such a hasty approval of the Israeli request from Washington?

After all, it is well known that, firstly, during the implementation of the probable contract, far from “fresh” Raptors from the production line of the military-industrial corporation Lockheed Martin will be delivered to the combat units of Hel Haavir (the first was “frozen” by the middle of the second decades of the XXI century), and machines with an impressive period of operation directly from the fighter squadrons of the US Air Force; secondly, within the framework of the contract for the supply of the F-35I "Adir" multipurpose fighters to the Israeli side, the specialists of the defense concerns of the Jewish state and the Hel Haavir flight crew received not only the vehicles brought to the operational readiness level with a full "package" of service from Lockheed ", But also access to the program code of the avionics (including the weapons control system) F-35I.

Access to the above software code, which ensures the stable functioning of the autonomous network-centric information system of logistics ALIS (aggregates into a single "information field" such means of radar, radio-technical and optical-electronic reconnaissance as AN / APG-81 radar, multispectral optical-electronic complex EOTS and infrared complex for detecting heat-contrast targets AN / AAQ-37 DAS), as well as the SUV of F-35I fighters, will provide Israeli Air Force specialists with the opportunity to update the software of the AN / APG-81 onboard radars with the implementation of the electronic countermeasures mode, the hardware reserve for which is due to the presence in the data AFAR-radar of radio frequency tunable filters ("Radio Frequency Tunable Filters"). Moreover, the existence of this program code at the disposal of Israeli specialists provides Hel Haavir with a much wider field of activity in the field of software and hardware integration of Israeli I-Derby-ER air combat missiles into the Adirov ammunition sets, as well as unique air-based anti-missile missiles “Stunner”. equipped with a combined seeker on the basis of a highly sensitive infrared matrix photodetector and an active radar direction finder.

Based on all of the above, we can come to the following conclusions. The primary reasons for the increased interest of the Israeli Air Force in the Raptors that have undergone more than one overhaul (despite their more outdated and less flexible avionics architecture) are, firstly, the presence of AN / APG-77 airborne radars with much more outstanding energy potential than the "lightning" AN / APG-81; and secondly, there is also a noticeably smaller effective reflective surface of the F-22A in comparison with the F-35I (0,07 sq. m versus 0,2 - 0,25 sq. m, respectively).

Against the backdrop of the recent expiration of the embargo on the sale of modern types of weapons to the Islamic Republic of Iran, as well as the likely conclusion between Rosoboronexport and the Iranian defense department of a multibillion-dollar contract for the supply of modern Su-30SM or Su-35S multifunctional fighters to Tehran, equipped with N011M Bars-R airborne radar "And Н035" Irbis-E ", only" Raptor "APG-77 (in conjunction with the above-mentioned EPR of 0,07 sq. M.) Will be able to provide the Israeli Air Force flight personnel with the opportunity to establish parity with the updated Iranian Air Force, which cannot be said on the less powerful AN / APG-81 radars.

An equally significant advantage of the Raptors in theaters of military operations, replete with enemy radar reconnaissance means, is the presence of much more advanced (than the Lightning / Adirov) integrated AN / ALR-94 radiation warning stations, represented by an aperture of 30 distributed over the glider passive multi-band sensors of electromagnetic radiation, providing all-aspect electronic reconnaissance at a distance of up to 460 km from the F-22A with the ability to identify the enemy airborne radar and passive target designation (based on the elevation and azimuth coordinates of the radio-emitting object) long-range air combat missiles AIM-120D after rendezvous with the target at a distance of less than 200 km.

Ctrl Enter
Noticed oshЫbku Highlight text and press. Ctrl + Enter
We are
F-35A and the new look of Hel Haavir. Netanyahu's loud statement "stumbles" about the power of modern Iranian air defenseOverseas ally? Donald Trump - US Presidential Candidate
104 comments
Information
Dear reader, to leave comments on the publication, you must to register.