Why Ukraine rebelled against the Polish landlord 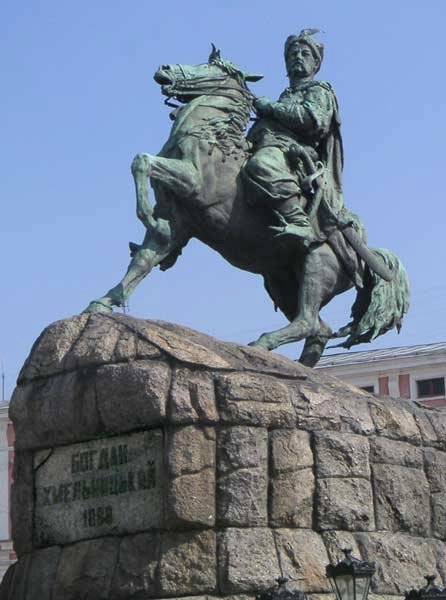 Monument to Bohdan Khmelnitsky in Kiev

Little Russia (Kiev region, Chernigov region) was a prosperous region. Farms and villages were decorated with rich gardens, the fields brought big harvests. Rivers, lakes and forests provided game and fish. The term "outskirts-ukraina" meant the outskirts. Kievan Rus in the XVI-XVII centuries was the outskirts of two great powers of Eastern Europe - the Commonwealth and the Russian kingdom. In Russia, this term was used to designate many areas. For example, there was Russian Ukraine - the southern regions, Siberian Ukraine - the land beyond the Urals. Polish Ukraine is the former Kiev, Chernigov-Severskaya, Galicia-Volyn and Belaya Rus. These lands were at first part of the Grand Duchy of Lithuania and Russian - the Russian state. Then Russian Lithuania underwent Catholicization and Polonization (Westernization). In 1569, the Union of Lublin was concluded between the Kingdom of Poland and the Grand Duchy of Lithuania, which marked the beginning of the federal state known as the Commonwealth. After that, the processes of Westernization of the Western Russian lands accelerated noticeably. The current citizens of Ukraine and Belarus at that time considered and called themselves Russians. There were no fundamental differences between the Russians of Minsk, Kiev, Moscow and Ryazan. Only ethnographic features, like local dialects. "Ukrainians" and "Belarusians" were created as "ethnic groups" in a directive order only after 1917.

Poland, and then Rzeczpospolita, having received the resources of Lithuanian Rus, had every opportunity to become the leading power in Eastern Europe. During the Russian Troubles, Polish rulers laid claim to the Moscow table. The richest and most populous regions of Russia were subordinated to them. The Polish elite could create a common development project for the Poles (western glades) and Rus-Russians, attractive to the Slavic peoples. However, the Polish nobility chose a different path, disastrous for the state and the people. In Poland, a noble "republic" was established - the rule of the powerful nobility. The nobles, lords and gentry (nobles) enjoyed almost unlimited freedom. The main state body was the Diet. Deputies to it were elected by the gentry at local seimiks. They elected kings, constantly expanding their capabilities and privileges. Received the right of "free veto" (lat. Liberum veto). Adoption of the law, any decision required "unanimity". Each deputy could fail the bill or the discussion of the issue, or even close the Diet, opposing it.

For the people, the "freedom" of the gentry turned into a disaster. As a result, slavery was established in Poland, in fact, in the most cruel way in Europe. The whole people was divided into a stratum of "chosen" (gentlemen and nobles) and slaves (slaves-slaves). Only the gentry had the exclusive right to own land and real estate. Not only serfs, but also free peasants fell into complete dependence on the masters, who had the right to trial and punishment in their possessions. The landowner established the order. In Galicia, corvee was daily. In the Dnieper region, a peasant with his horse worked for the owner three days a week. The collection from the population was the highest in Europe. In Russia "tenth money" (tithe) was an extraordinary tax, in Poland - an annual one. Also, peasants paid for the ownership and grazing of livestock, from hives, for fishing and gathering wild plants, for grinding, at the conclusion of marriage and the birth of a child, etc. The owner could simply appoint one-time payments for any important occasion - war, holiday, etc.

The people were sucked dry. At the same time, the funds did not go to the development of the state. They were spent on luxury and pleasure. On aimless and ruinous wars, strife. The magnates and lords bathed in gold, burned their lives. We had large-scale feasts, balls and hunts. Wealth came easily, also descended. The middle and small gentry tried to follow the nobles. For ordinary people, this turned into a difficult yoke, a lot of blood. The life of a commoner was worth nothing, any nobleman could easily humiliate him, rob, maim and even kill him. Polish slaves in their rights were on a par with Turkish or Venetian slave rowers in galleys, convicts.

The pans subdued the voivodeships and the elders. The posts of governors and chiefs became hereditary. Most cities, unlike Western Europe, also fell under the rule of feudal lords. So, in Kiev and Bratslav provinces, out of 323 cities and towns, 261 belonged to magnates. They had the right to duty-free trade and a host of other privileges, such as distilling, brewing, ore mining, etc. Panamas were either too lazy to deal with the economy, or above their "dignity". So they hired stewards. Practically the only educated stratum inclined to trade and economic activity in Poland were Jews. In addition, the Jews were strangers to local residents, collusion and indulgences were excluded. As a result, both parties benefited. The nobility was messing around, having fun and getting money for it. The Jews squeezed all the juices out of the people, forgetting themselves. The people found themselves under double oppression. Accordingly, they hated both the Polish lords and their managers.

Another misfortune of Little Russia (as the Greek authors called Kievan Rus) were the Tatar raids. The Crimean horde with its raids and campaigns disturbed not only Moscow Russia, but also the Commonwealth. The king did not have a permanent large army, the means to build fortified lines on the border (as the Russian sovereigns did). Therefore, it was impossible to repel the rapid raids of the Crimeans under such orders. The Cossacks were the only defenders of the people. They lived in Dnieper towns and villages, intercepted Crimean detachments, freed prisoners, and attacked the enemy themselves. The border governors of the Vishnevets, Ostrog, Zaslavsky (Western Russian princely and boyar families) organized and armed the Cossacks, having received a serious force for the defense of their vast possessions.

Under Ivan IV, the Dnieper Cossacks recognized themselves as subjects of the Terrible Tsar. But King Stefan Batory was able to split the Cossacks. Created a registry. The Cossacks enrolled in it were listed in the royal service and received a salary. The rest of the Cossacks, who were not included in the register, were transferred to the position of ordinary peasants. Many did not accept, went further south, to Zaporozhye, created a Sich (spotting) there. It became the center of the "free" Cossacks. She lived by her own laws. Until the end of the XNUMXth century, the Cossacks were guided by Moscow. But then they managed to lure them over to the side of the Polish king. In the Time of Troubles and in the Russian-Polish wars, they fought on the side of the king. Also, the Cossacks restrained the expansion and aggression of Turkey and the Crimean Khanate. As a result, they turned out to be the only military organized force that was able to resist the complete enslavement of Ukraine.

At first, serfdom, slaveholding systems in Poland were much tougher than in the Russian outskirts. In Ukraine, the people in force historical circumstances he lived more at ease. But in the 1596th century, the situation in Polish Ukraine changed dramatically. In XNUMX, the Brest Church Union was adopted - the decision of a number of bishops of the Kiev Metropolis, headed by Metropolitan Mikhail Rogoza, to accept the Catholic doctrine and transfer to the subordination of the Pope while preserving the worship of the Byzantine tradition. Catholics in alliance with the Uniates and the Polish authorities launched an offensive against the Orthodox. The Uniates took over the best, richest churches and monasteries. Churches in which Orthodox priests who did not accept the union served were closed, the priests themselves were deprived of parishes, and only Uniate priests were allowed to conduct divine services. Orthodox petty bourgeois (townspeople) were not admitted to the city magistrates, and artisans were excluded from the workshops. For the sake of a career and material well-being, the Western Russian Orthodox nobility accepted Catholicism, became pollinated.

Pan's oppression has increased significantly. Previously, the gentry of the border territories had to reckon with the Russians in one way or another. Poles and Russians together opposed the predatory Crimean horde. The Pans provided great privileges to fugitive peasants in order to settle their vast but empty lands. And the border nobles, magnates and lords themselves were Russian by blood and faith. However, the situation has changed. The tycoons with sabers and lances of the Cossacks, through the labor of the peasants-settlers, amassed whole "kingdoms in the kingdom" They were the largest landowners of the Commonwealth. Vishnevetsky had his own army, owned 40 thousand peasant households in the Poltava region; Zaslavsky owned 80 cities and towns, over 2700 villages; Konetspolsky - 170 cities and towns, 740 villages in the Bratslav region; Zholkevsky - most of the Lviv region. They were real kings in their domain. The connection of the West Russian nobility with the people was interrupted. The magnates of Russian origin completely became polonized, converted to Catholicism. Benefits for the common people are over. The same procedures were introduced as in the central part of Poland.

Ideological and religious, national and socio-economic oppression (in fact, the most severe colonization) led to a series of peasant uprisings and Cossack revolts. The Polish authorities and lords mistakenly reacted to these "signs" and aggravated the situation. Instead of a gradual, "amicable" integration of the Russian outskirts into Poland, they responded with sword and fire. Punitive expeditions, genocide of Russians. The uprisings were literally drowned in blood. Whole villages were carved and burned out. Neither women, nor children, nor old people were spared. At the same time, at first, the rebellious peasants and Cossacks did not intend to separate from the Commonwealth. They still believed in the "good king" and "bad lords". They sent delegations, letters, asked to soften their situation, to protect Orthodoxy by law, to increase the register of Cossacks, to enable Orthodox nobles, the Metropolitan, Cossacks to enter the Sejm, etc. That is, to make Ukraine a full-fledged part of Poland.

However, all attempts of the Western Russian elite to settle normally within the framework of Poland (similar dreams of modern "Ukrainians" about the European Union and NATO) were rejected by the Polish authorities, magnates and Catholics. In Warsaw, they decided to simply destroy the Cossacks, the Russian faith, and suppress any attempts of resistance by terror and genocide. Make Kievan Rus a colony of Poland forever, following the example of the Western powers that seized overseas possessions in America, Africa and Asia. The people responded with a national liberation war. He nominated a talented and ardent leader - Bogdan Khmelnitsky. With a lot of blood, through battles, massacres and fires, the Western Russian lands returned to the united Russian state. A different path promised the complete extermination of Russianness (Russian language, faith and culture) in Little Russia. It was the people who chose the path of struggle and preservation.

Ctrl Enter
Noticed oshЫbku Highlight text and press. Ctrl + Enter
We are
The extinction of the Romanoviches and the division of their heritageRussian allies of Mongolo-Tatars
113 comments
Information
Dear reader, to leave comments on the publication, you must to register.