The disgraced tank factory. Reasons for the poor quality of the T-34 from "Krasny Sormov" 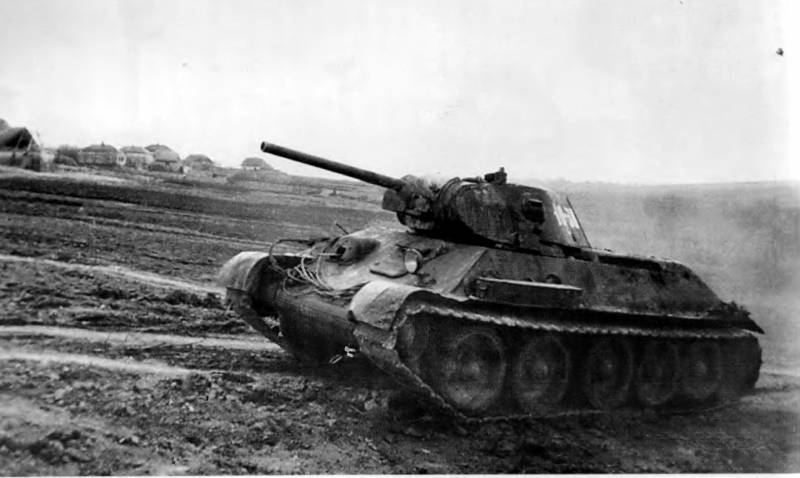 T-34 on the march. Source: waralbum.ru

In the previous part stories it was about low quality tanks from the Krasnoye Sormovo plant and the reaction of the country's top leadership to this fact. Joseph Stalin directly demanded that the People's Commissar Malyshev take measures to resolve the problem of the "Sormovskiye Freaks", in which the tankers refuse to go into battle. Looking ahead, it is worth saying that only after this did the People's Commissar really take care of improving working conditions at the disgraced plant. 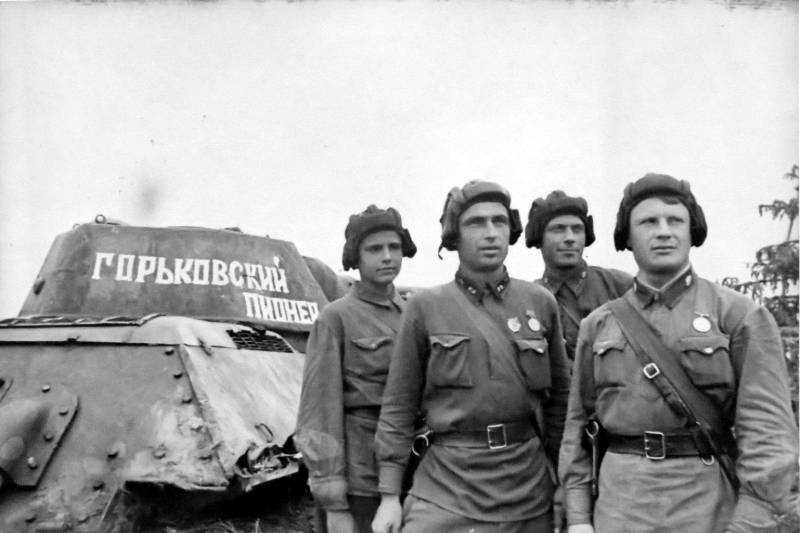 The crew of the tank next to the T-34 tank with its own name "Gorky Pioneer". On September 1, 1941, students of the 102nd school of the city of Gorky (now Nizhny Novgorod) appealed to all pioneers and schoolchildren of the Gorky region with an appeal to build the Gorky Pioneer tank. Already on January 18, 1942, a tank built at factory number 112 Krasnoe Sormovo was transferred to the active army. In total, during the war years, 7 tanks were built with funds raised by pioneers and schoolchildren of the Gorky region. Source: waralbum.ru
The plant not only sent tanks of unsatisfactory quality to the front, but also chronically did not issue the norms of the plan. One of the reasons for the lag was the lack of components. In particular, a difficult situation has developed with the M-17T carburetor engines, which were dispatched to Krasnoye Sormovo due to the constant lack of diesel engines. Collect tank variants aviation motors should have been in Gorky at GAZ. For this purpose, a "special workshop number 10" was organized there. But the car plant lacked equipment and about 300 workers, which, naturally, disrupted the delivery schedules to the customer.

Briefly about the motor. It was decided to transfer it to the tank category in 1936, due to the lack of power plants for the rapidly developing Soviet tank program. To adapt, the spark plugs were moved inside the camber, the toe of the crankshaft was shortened and provided with a key for attaching the pulley, and the gear oil pump was replaced with a piston pump. Features of operation as part of armored vehicles forced engineers to increase the resource of the M-17. To do this, the engine speed was reduced due to the smaller size of the nozzles and diffusers of the carburetor, as well as by installing a fuse on the throttle that does not allow the engine to reach maximum speed. They deprived the tank version of a high-altitude crane as unnecessary, designed to regulate the supply of gasoline depending on the air density at different flight altitudes. The power of the M-17T was 500 hp. with., which quite allowed him to replace the tank diesel V-2 of similar performance.

Difficulties in mastering the production of the engine in Gorky (previously the aircraft version of the M-17F was produced in Rybinsk) did not allow Krasnoy Sormov to reach the planned production parameters of tanks. In August 1941, only one engine was delivered, in September - 10, in October - 75, and in December - 104. At the same time, 112 M-745Ts were expected at tank assembly plant No. 17 until the end of the year, and received 218. In 1942, the situation was a little has leveled off - from Gorky have already received 466 gasoline engines out of the planned 740, and from Sverdlovsk (plant number 76) 2458 diesel V-2, although there should have been 3020.

One of the most critical areas of domestic mechanical engineering in the pre-war period was the production of ball bearings. With the outbreak of the war, the situation with their supplies to defense factories became especially aggravated, and Krasnoye Sormovo (as a “second plan” plant) chronically received less of this “strategic resource”. It got to the point that the ball bearings were delivered to the enterprise by transport planes in small batches, which lasted only two or three days.

The epic with radio stations deserves special mention. Traditionally, for plant No. 112, the supplier did not fulfill its obligations in full and in 1941 sent only 45 radio stations to Krasnoe Sormovo. We must pay tribute to the leadership of the tank enterprise, which promptly organized the development and production of the 12-RT radio station at the Frunze plant. The tanks were equipped with this successful model of the radio station until the very end of the war. It is interesting that in "Krasny Sormovo" the stations were not mounted on tanks: for this, the T-34s went on their own to the Lenin plant and were already equipped there with intercom and 12-RT.

The scale of the disruption in the supply of components to Krasnoe Sormovo is very clearly illustrated by a letter to the secretary of the Sormovsky district committee of the All-Union Communist Party of Bolsheviks on January 9, 1942 from members of the party bureau Gusev, Demyanenko and Kuznetsov. It noted the failure of three factories (Verkhne-Isetsky, Tirlansky and Kuznetsk) to fulfill orders for thin sheet steel. The letter also contained claims against the management of the Kaganovich plant, which refused to hire Krasny Sormov steel sheet for purely departmental reasons. 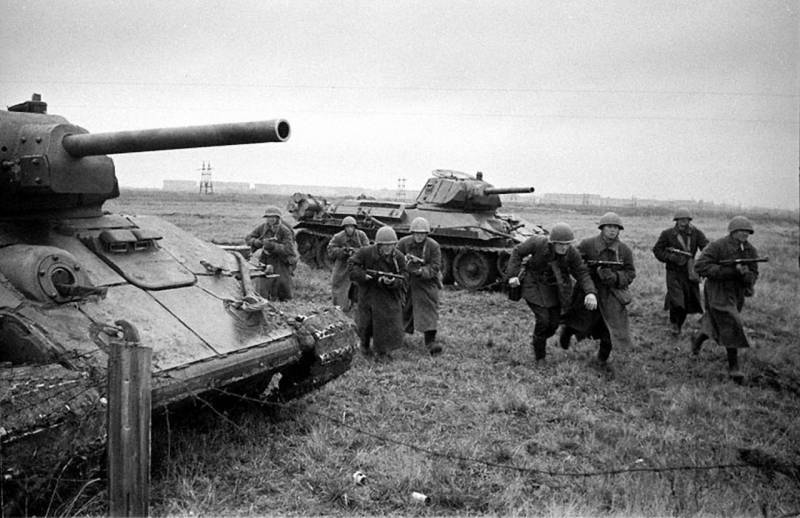 Working out the interaction of the infantry and the T-34 with additional armor (manufactured by the plant No. 112 Krasnoe Sormovo). Leningrad Front, autumn 1942 Source: waralbum.ru
In addition to the lack of resources and components for the T-34, the plant had serious problems with labor resources, which had appeared in the pre-war period. The metallurgists of Krasny Sormov were under special control. On January 14, 1941, the bureau of the Sormovsky District Committee of the All-Union Communist Party of Bolsheviks discussed the issue of supplying metallurgical shop No. 19 with charge. It was noted that “the chief metallurgist of the plant, comrade Lobashov is not sufficiently involved in organizing the work of metallurgical shops. "

In the final of one of the reports at a meeting of the district committee, it was noted that in 1939 the loss from marriage amounted to 5 rubles, in 487 - 000 rubles. And as a result: "The culture of production is at an extremely low level, there is a looseness in the technological discipline." It is quite understandable that with the beginning of the Great Patriotic War it did not get any better. In the first years, in particular, complaints were voiced "against the Stakhanovites of foundries": "You give too poor quality casting for towers, protection, thereby causing a large defect in processing shops."

The Stakhanovites at the plant number 112 generally got it. In May 1942, the party organizer of the Central Committee of the CPSU (b), Comrade Nesterov, accused the factory party organizations of insufficient attention to the Stakhanovites and poor control of production activities. Numerous commissions trying to find out the reasons for the low quality of the produced T-34s wrote in their reports invariably: "Labor discipline is at a low level, irresponsibility reigns, which in the conditions of the Patriotic War borders on betrayal of the Motherland."

In fairness, it is worth mentioning separately the real heroes of production at the Krasnoye Sormovo plant. Master Evdokimov - by May 16, 1942 fulfilled the monthly quota. The Stakhanovites Berezin and Kalmykov did not leave the shop for 38-40 hours. Master Burmistrenko - on some days he performed up to five norms!

The director of the plant, Efim Emmanuilovich Rubinchik, mentioned in the first part, from the very beginning of work in May 1942, began to solve the problem of the lack of tracks. He enlisted the support of the People's Commissar Malyshev, localized the stamping of trucks according to Stalingrad recipes and organized double payment for the implementation of the production plan. So, the head of the shop received 5000 rubles in bonuses, his deputy - 4000 rubles, and mechanics, foremen, foremen and foremen - one or two monthly salaries. To fulfill the plan, the head of the track punching shop received 150 thousand rubles for bonuses to his 150 employees, each of whom was additionally supplied with a pair of shoes and 3,5 meters of silk or wool. In July 1942, an independent workshop No. 20 was separated and reconstructed from workshop No. 7, operatively equipped with equipment with maximum mechanization of all production processes. The total cost of the new workshop was up to 3 million rubles. The new self-produced track showed itself positively in operation; in addition to reducing scrap, the durability and endurance of the tracks were improved. As you can see, in 1942, tank tracks for the T-34 became almost a strategic resource. 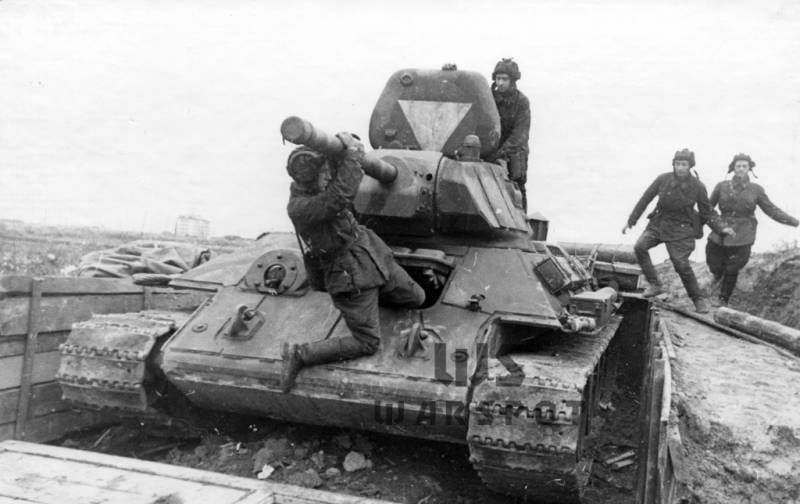 Shielded in "Krasnoe Sormovo" T-34. Source: warspot.ru
And, finally, the notorious cracks in the armor were the most important problem in the production of tanks at Krasnoye Sormovo. This was observed at all the tank factories of the Soviet Union during the Great Patriotic War, but the enterprise number 112 distinguished itself especially in this story. To speed up production (the plan required tanks to the front!), The technology of machining the tank hull was greatly simplified. Also, the factory workers replaced the double hardening of the single turret, reduced the time for the high tempering of the 8C armor, and also canceled the repeated tempering of a number of small hull parts. As a result, they saved 8 hours of time for assembling the T-34, but significantly increased the tendency of the armor to crack. At the same time, cracks were often not detected at the stage of military acceptance, but revealed themselves already in military operation. A scandal erupted, and by the summer of 1942 the State Defense Committee had even issued a special decree on the situation with the T-34 armored hulls on the Red Sormovo. Historians P.V. Pustyrev and E.I. Podrepny in one of their works write about the measures taken:

1. It is forbidden to cut heat-treated parts with oxygen for high hardness.
2. Prohibited low tempering in flame furnaces that do not provide a stable low tempering temperature of 250-330 °.
3. Limited chemical. carbon analysis, for parts more prone to cracking, such as the front plate and bead.
4. Introduced induction heating of parts No. 34.29.904 with protection "DT" and eyelets.
5. The current strength of the welding protection "DT" and the eyelets is limited to 250 amperes with an electrode diameter of 5 mm.
6. The use of "MD" grade electrode for front sheet welding was canceled, with the replacement of a higher quality austenite electrode.
7. Introduced low tempering of the welded unit of part 34-29-9O4 with protection "DT" and eyelets.
8. Constructive changes were made to the nodes at the joints in order to eliminate the need for trimming parts during assembly.
9. Introduced low tempering of bodies after welding.
In addition, all welders were re-certified for the right to weld armored structures, and measures were taken to train highly qualified personnel of welders, gas cutters, thermists, assemblers.

As a result, the proportion of hulls with cracks began to slowly but decline - from 35,2% (in 1942) to 5,4% (in 1945). It is worth remembering that until the middle of 1943 at the Krasnoye Sormovo plant they could only dream of EO Paton's automatic welding machines. People's Commissar Malyshev, only after a direct hint from Stalin, which was mentioned above, sent two automatic welding machines and several metal-working machines to plant number 112. In August 1943, a carousel machine for the manufacture of large-diameter gear rims was introduced, and reinforcements arrived in the form of a group of designers and technologists from Uralvagonzavod, Uralmash and the Institute of Electric Welding of the USSR Academy of Sciences. From that time on, the army finally forgot about the "Sormovskiye ugly".

Ctrl Enter
Noticed oshЫbku Highlight text and press. Ctrl + Enter
We are
"Gasoline leakage and spontaneous combustion are possible!" T-34 from "Red Sormov"Armored vehicles of Ukraine: results, potential, prospects ...
45 comments
Information
Dear reader, to leave comments on the publication, you must to register.