I was killed near Tuapse 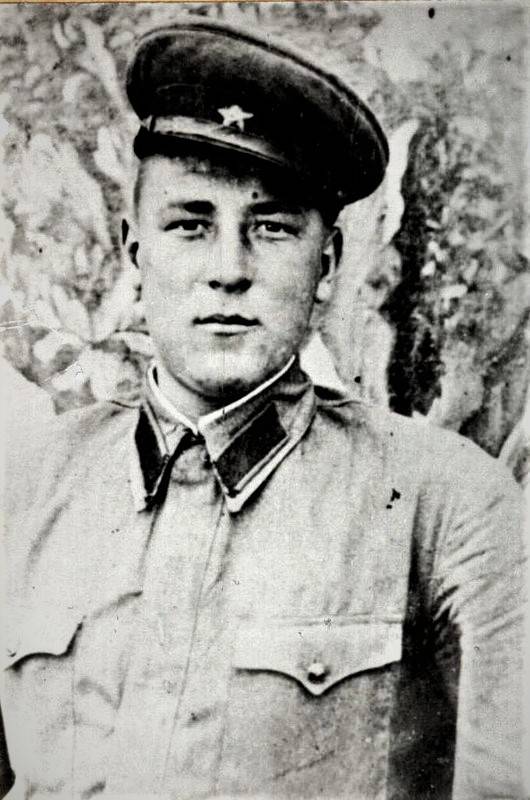 “I was killed near Tuapse” - this is how the first line of the famous poem by Evgeny Astakhov sounds. It first appeared in the 70s of the last century on the pages of the famous weekly Literaturnaya Rossiya. And there was a man who picked up beautiful music to the sad words.

There, on the passes

Since then, over the years, this song has been heard, albeit not too often, like a sad requiem for the Soviet soldiers of the last war killed in the fateful 40s. All of them, young and beardless, twenty years old, died in these dazzling mountains surrounding the city by the sea, and did not live to see Victory.

Selected fascist high-mountain divisions, battalions of foreign legions, jaeger and motorized units in September 1942 launched a decisive offensive on Tuapse. However, their efforts were in vain - Hitler's thugs, not reaching the once quiet resort town of some 23 kilometers, found their death on passes and mountain slopes, in gorges and among rocky gullies.

Destroyed and exhausted, they, having run over, as in the battles near Moscow and Stalingrad, to the resistance of the Soviet guys, wavered and fled. The defenders of the courageous southern city did not allow the enemy to advance further. It was in this place that the fate of the entire Caucasus was decided. The soldiers fought to the death and won. The enemy did not pass!

And our hero - he comes from the village of Brynchagi - perhaps the most famous in the Pereslavsky district of the Yaroslavl region. She gained fame thanks to the namesakes: the designer of the legendary tank T-34 to Mikhail Ilyich Koshkin and Lieutenant Alexei Ivanovich Koshkin.

The first of them is a Hero of Socialist Labor, the second is a Hero of the Soviet Union. Just about him - Alexey Ivanovich - we want to remind you today, because just over a month ago it was a hundred years since his birth.

By the way, the fellow villagers of Mikhail and Alexei Koshkins are no-no in conversation, remembering heroes with the same surname, and they certainly mention that they are almost like relatives. Or maybe it really is! However, there are so many villages and villages in Russia, where half of the inhabitants bore the same surname, and almost all of them were related to each other.

Aleksey Koshkin, the MTS tractor driver from Brinchagi, was not yet twenty when he was drafted into the ranks of the Red Army. It was 1940, and two years later he - a Soviet officer - performed a feat and died. He was posthumously awarded the title of Hero of the Soviet Union. 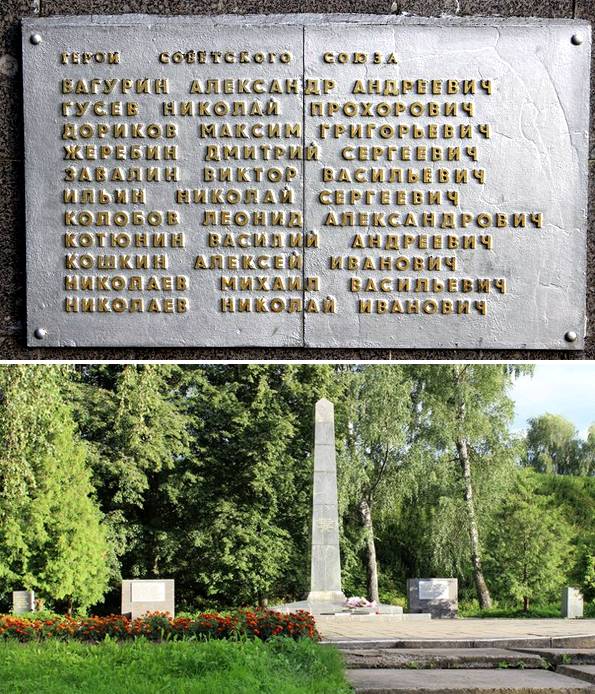 In the village of Rakhmanovo, not far from Brynchag, a monument is erected, and the name of this hero is engraved on an obelisk in the city of Pereslavl-Zalessky. One of the busiest streets of the Black Sea port of Tuapse is also named in honor of Alexei Koshkin.

Patriot will continue to search

And also his name bears secondary school number 26 in the village of Indyuk in the Caucasus, which is not far from the place of death of the Pereslavl boy Koshkin. So the deputies of the district council decided in 2019. And here is what the search engines from the Patriot squad say:

“... Despite the restrictions associated with coronavirus infection, in 2020, search work in the Krasnodar Territory continued. The detachment has been traveling there annually since 2007. On the first day at the Ostrovskaya Shchel farm, a volunteer cleanup was held at the memorial to those who died during the Great Patriotic War of 1941-1945.

Then, in the Shaumyanovskoye rural settlement, they carried out reconnaissance and established the place of death of 24 Red Army soldiers, who are being carefully continued to raise by local search engines. We hope we will be able to establish the names and find the relatives of the victims.

In the year of the 75th anniversary of the Great Victory, we took to the mountains a memorial plaque to the hero of Yaroslavl - Alexei Ivanovich Koshkin. He died exactly where the detachment has been working for many years. This is the little that can be done to preserve the memory of this Hero. His name is carved in golden letters on the Alley of Heroes. One of the streets of Tuapse is named in his honor.

At the place of his death, a memorial plaque was installed, brought from his native Yaroslavl region by young guys, the same as he was - a 22-year-old Hero. In the village of Indyuk, in a school named after Alexei Ivanovich Koshkin, the detachments met with school activists, and an agreement on cooperation was drawn up with the Patriot Center YARVPDMOO.

On the day of the Hero's feat, the "Lesson of Courage" will be held while online. In the future, joint search expeditions, patriotic events are planned ... ". 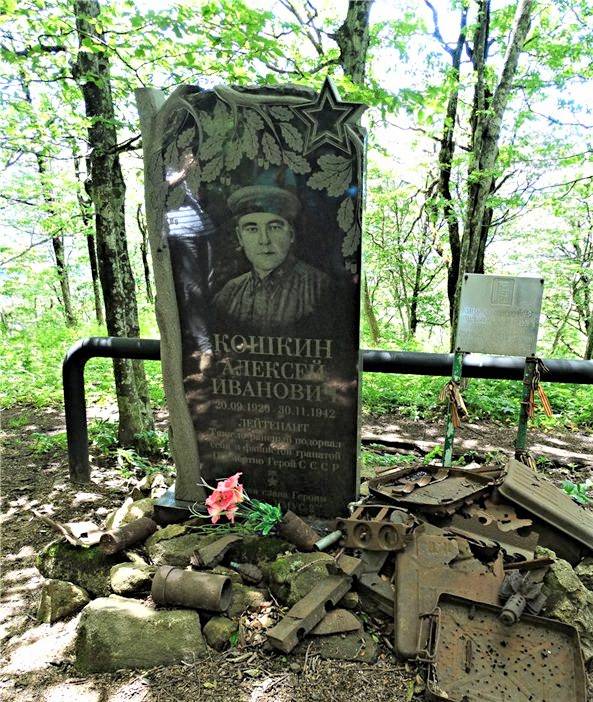 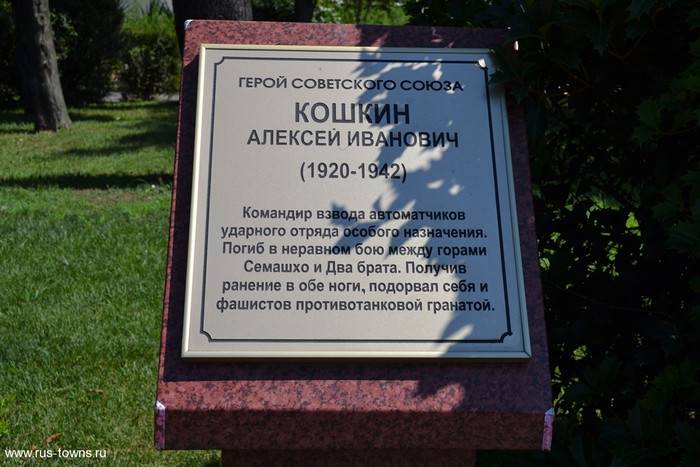 Let us and all of us together take part in this event.

Platoon burrowing into the clouds

So, after graduating from the military infantry school, officer Koshkin departed for the Transcaucasian Front, to the location of the 1st Special Purpose Shock Detachment of the 18th Army, which defended Tuapse. In the last days of September 1942, the second period of the Tuapse defensive operation began.

After capturing the village of Shaumyan on October 20, the fascists encircled the regiments of the 408th division under the command of Colonel P. Kitsuk. But the enemy could not break through the Goytkh Pass. One of the Hitlerite units managed to climb Mount Semashkho and gain a foothold there. These were penalties from the 500th battalion of the 101st Jaeger Division. They densely surrounded the saddle overgrown with dense forest between the Semashkho and Two Brothers mountains. 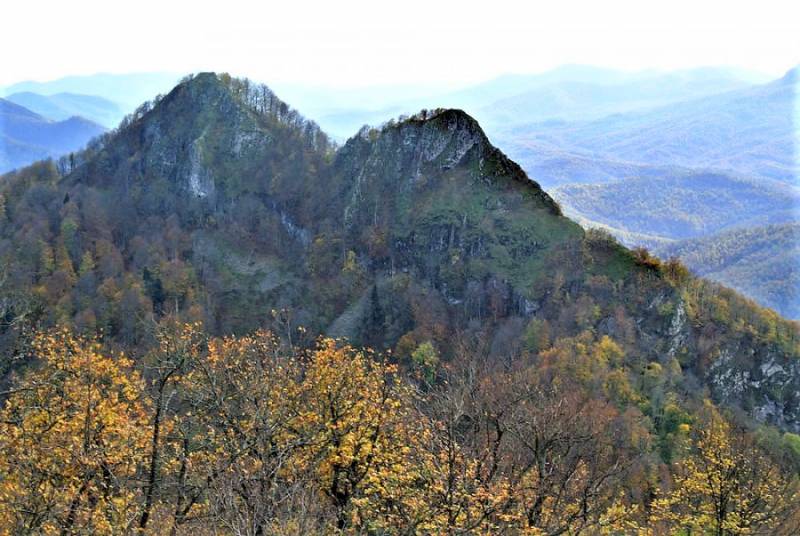 The commander of the platoon of machine gunners, Lieutenant Alexei Koshkin, received the task: to climb to the saddle area and knock out the enemy. And then everything developed exactly as in the wonderful song of Vladimir Vysotsky "Alpine Arrows"

... The fight will be tomorrow, but for now
Platoon burrowing into the clouds
And he left along the pass ...

Vysotsky composed this song, as I think, about Lieutenant Koshkin's platoon. On the night of October 30, at about two o'clock in the morning, the Soviet soldiers, having passed the outposts, overcoming the smoky forest and breaking through the blaze of the fire, reached a clearing occupied by the enemy. A short fight, dagger fire and hand-to-hand combat made it clear that the Nazis were finished.

But the penalty boxes thrown off the saddle, pretty much pumped up with schnapps, rose in a frontal attack. They walked in parade formation, disheveled, chanting and cackling, with cigars in their teeth. The Koshkins fought off enemy attacks one after another. Four times the Nazis tried to break through, but in vain.

But their fifth attack becomes different: with the support of dense mortar fire, hiding behind trees and disguising themselves, the Nazis are coming closer and closer. The situation is becoming threatening. Koshkin raises the fighters to counterattack.

Suddenly he is wounded in both legs, falls, and now he is surrounded by enemy soldiers. They are getting closer and closer. When Alexey began to distinguish between their faces, he grabbed a grenade from his pouch and pulled the pin.

Explosion ... And enemy corpses fell to the ground next to the Soviet officer. In this deadly battle for Alexei, his fighters managed to defeat the enemy and gain a foothold on the saddle.

He was buried there on the southeastern slope of Mount Semashkho.

By the decree of the Presidium of the Supreme Soviet of the USSR of March 31, 1943, Lieutenant Alexei Ivanovich Koshkin was awarded the title of Hero of the Soviet Union for exemplary performance of combat missions of the command on the front of the struggle against the Nazi invaders and the courage and heroism shown at the same time. 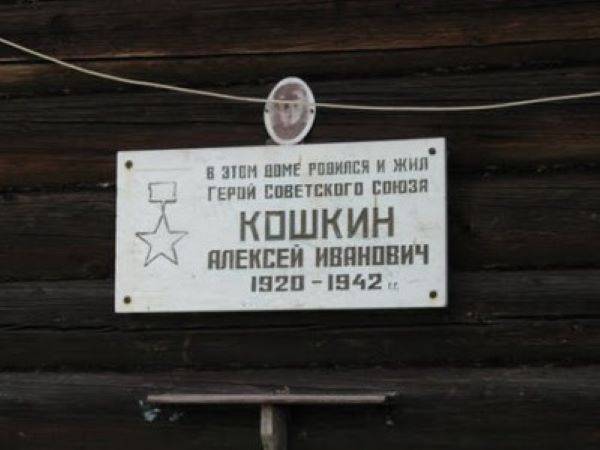 When the "Lesson of Courage" is over, then everyone who takes part in it (albeit online), quietly, in an undertone, of course, will sing the very song "I was killed near Tuapse":

I was killed near Tuapse,
In the area of ​​height Semashkho.
A tear will flash over me in the dew,
Broken flask with a fragment.

My machine lies with me
Rusty pattern painted.
Once upon a time I ended the fight
But still not demobilized.

Time goes by - day after day
And I'm all here at the bottom of the hollow
Where they died under fire
Twenty year old men.

And you, since you’re not shot down by bullets,
You, who once shook my hand,
Tell them I'm killed
That I'm not missing.

Say we are all killed.
Shoulder to shoulder at the bottom of the hollow
Tuapse shut down
Twenty year old men.