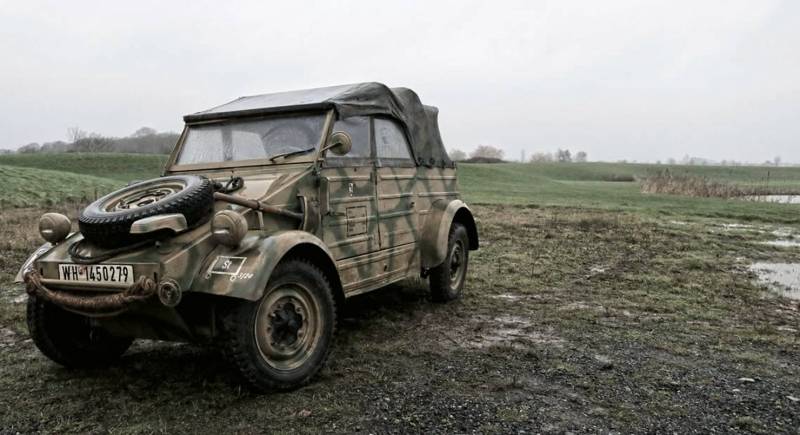 Volkswagen Kubelwagen became the most massive passenger car in Germany during the Second World War. The appearance of this machine is familiar to almost everyone, even people who have never been fond of history... "Kubelvagen" often appears in photographs, newsreels and is a familiar guest of historical reenactments. This model can be found in museums and private collections. Due to the large volume of serial production, a sufficient number of these cars have survived to this day.


The Volkswagen Kubelwagen was mass-produced in Germany from 1939 to 1945. Until the summer of 1945, the German industry managed to produce 50 435 of these cars in various modifications. Thanks to this, the Kubelwagen became the most common passenger car in the Wehrmacht and SS troops. The car received its nickname Kübelwagen (Kübel in translation from German - "pelvis") for its characteristic appearance. The military convertible, characterized by good maneuverability, reminded the soldiers of a wash basin. The official designation of the model was Volkswagen Typ 82.

The history of the appearance of the military vehicle Volkswagen Kubelwagen is inextricably linked with Hitler's desire to create a people's car. Adolf Hitler promised his supporters that he would be able to provide every German family with his own passenger car. The renowned designer Ferdinand Porsche was brought in to fulfill such a daunting task. The phrase Volkswagen, which has become a real symbol of Germany (translated from German as "people's car"), was first heard in 1935 at the opening of the next Berlin Motor Show, even before the appearance of the company of the same name.

The Volkswagen plant itself was founded only on May 26, 1938 in the little-known town of Fallersleben, today it is the city of Wolfsburg. The new plant was built on the basis of a maximum output of 500 thousand cars per year. At the same time, in reality, the production of passenger cars developed by Porsche amounted to 44 cars. These were the early versions of the Beetle, which became the brand's bestseller after the war. The plant did not manage to expand the production of civilian passenger cars. All the cars produced went not to the people, but to the officials. Already from September 1, 1939, the plant was completely reoriented to the production of military products. 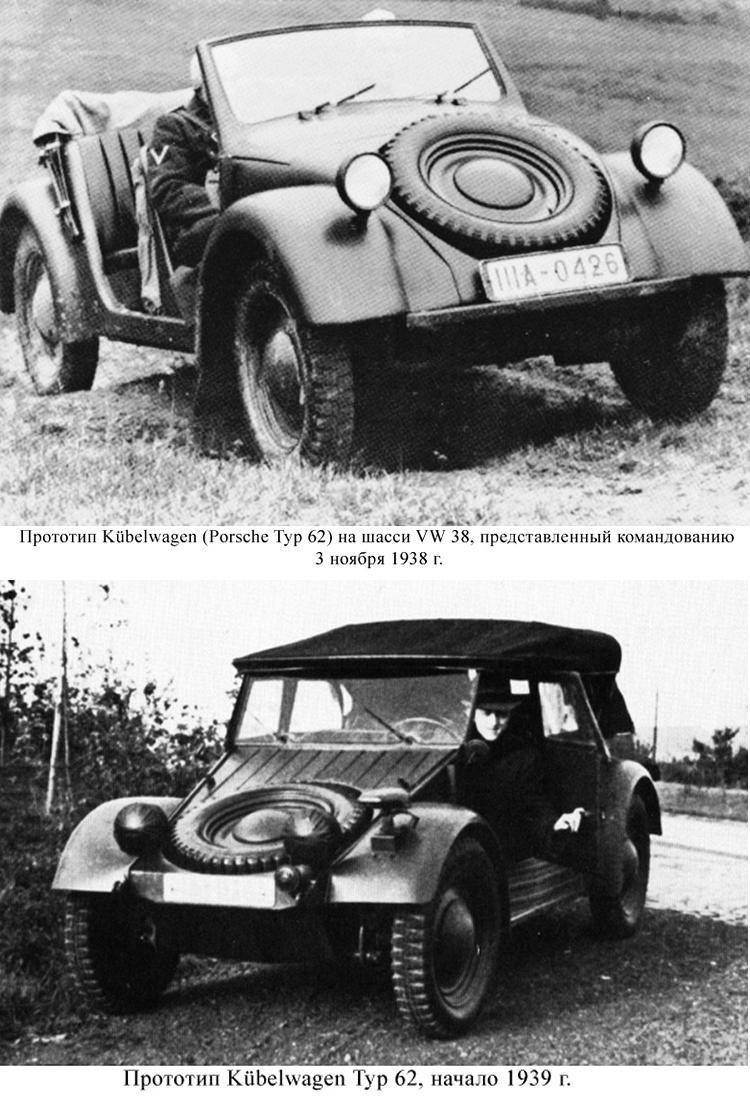 At the same time, the military turned to Ferdinand Porsche with a request to create an unpretentious light car that could be operated off-road and in difficult climatic conditions, back in January 1938. The first prototypes, designated Typ 62, were tested in November 1938. The car was considered very successful, despite the lack of all-wheel drive.

A compact and maneuverable vehicle with a center differential and light weight could compete with some examples of the Wehrmacht's all-wheel drive vehicles. In 1939, the Typ 62 was modernized and received its recognizable angular body. The first models were tested in combat conditions during the Polish campaign of the Wehrmacht. After all the modernization and design changes (including the results of tests in real combat conditions), the car received a new designation Volkswagen Typ 82. Under this designation, the car will be mass-produced in February 1940, having created 30 different modifications on the basis of a light military vehicle.

Technical features of the German "pelvis"

The new light military vehicle differed from the civilian model by a special maximally lightweight 4-door open all-metal body with flat panels and rear wheel gears. Wheel arrangement - 4x2, rear-wheel drive. The features of the military model included the presence of an interwheel self-locking differential, as well as an increased ground clearance of 290 mm. Also, the Volkswagen Typ 82 was fitted with 16-inch wheels. For operations in North Africa, special tires with a wider tread width were used, which had a positive effect on passability on sands. 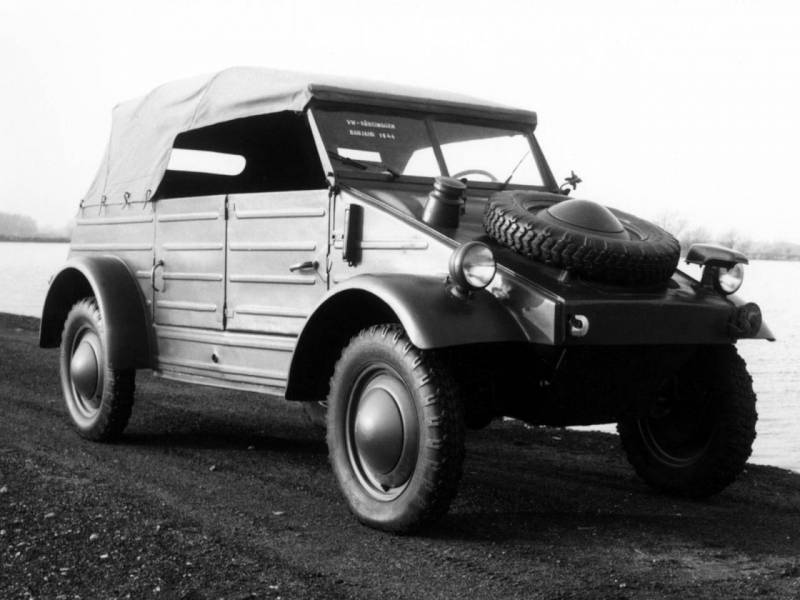 The car body was assembled from longitudinally reinforced thin sheet metal (they had a characteristic type of stamping). The body had a folding canvas roof and a folding windshield. The lack of a full-fledged roof was due to the desire to lighten and simplify the design of the machine as much as possible. The body had four side doors that opened in different directions. Under normal operating conditions, the vehicle was designed to carry four people, including the driver. On the flat front of the car, which had a pronounced wedge-shaped shape, there was a spare wheel. At the rear was the engine. At the same time, all forms of the car were chopped, angular, which formed its widely recognizable appearance.

The car was equipped with a 40-liter fuel tank, which was located in the front trunk compartment. The location of the tank was clearly indicated by the filler neck on the right side of the trunk lid. In some cases, a bracket was installed above it in the factory or already at the front, which was used to accommodate a single MG34 / 42 machine gun. In bad weather conditions, the folding canvas roof could be extended. If necessary, special removable side windows could be inserted into the side openings above the doors.

The first production cars Volkswagen Kubelwagen were equipped with an air-cooled gasoline engine with a volume of 1 liter and a power of 23 hp. Since March 1943, cars with a new 1,1-liter four-cylinder engine went into serial production. Engine power increased to 25 hp, which was increased by simple boring of the cylinder bore. There were no other changes in its design. The engine was paired with a 4-speed manual gearbox. The engine power was enough to provide a small car with a maximum speed of 80 km / h and a highway range of up to 440 km. The low-power engine had its advantages: fuel consumption per 100 km was about 9 liters, which was a very good indicator for that time. 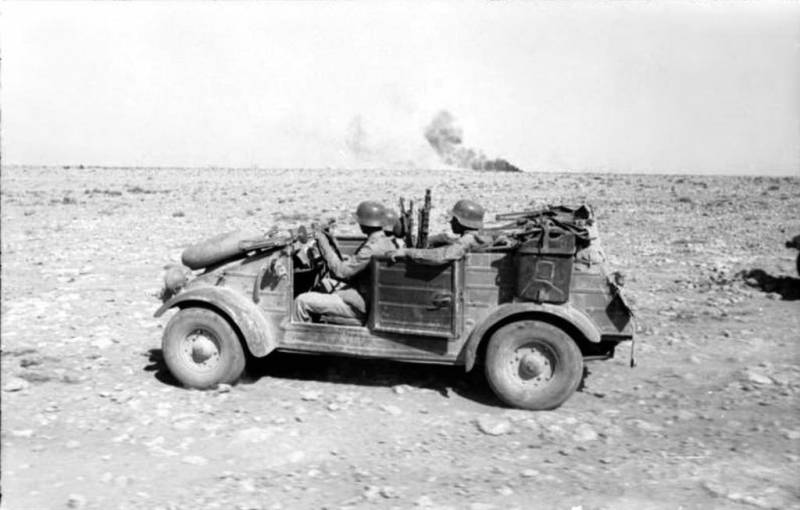 The Volkswagen Kubelwagen received mechanical drum brakes and an independent torsion bar suspension. Compact independent link-torsion bar suspension of all wheels made the car comfortable when driving on different types of terrain. At the same time, the flat and smooth bottom increased the cross-country ability, allowing the car to literally slide through the mud without being caught by any protruding elements.

Strengths and weaknesses of the Volkswagen Kubelwagen

Volkswagen Kubelwagen had very good cross-country ability for non-four-wheel drive vehicles. Almost all 4x4 cars turned out to be more practical in mud baths. At the same time, among cars with a 4x2 wheel arrangement, Kubelwagen really had no competitors. The positive qualities of the model were high ground clearance (approximately 29 cm) and low weight. In many respects, the cross-country ability of the people's military vehicle was determined precisely by its light weight - 715 kg. The latter circumstance contributed to the fact that a pair of "true Aryans" could always push the car out of almost any mud.

At the same time, the lack of engine power was attributed to the disadvantages of the car, in later models - only 25 hp. In this regard, the power of the air-cooled engine was not always enough, especially when operating the car in difficult front-line conditions. The car often moved through mud, off-road, rough terrain, including with significant differences in altitude. Due to insufficient power, the engine often had to be used at the limit of its capabilities, which led to overloads, overheating and often became the cause of breakdowns. At the same time, the VW engine was very simple and maintainable, almost any mechanic could easily figure it out. An air-cooled engine was also found to be preferred for hot and cold climates and was less vulnerable to bullets and shrapnel due to the lack of a radiator. 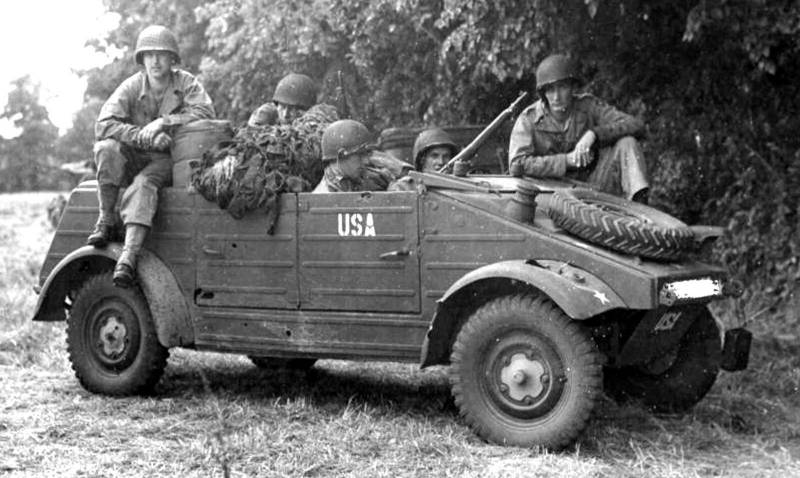 Independent wheel suspension, which was the advantage of the machine, behaved differently in different theaters of war. In the Soviet Union, under the conditions of the Eastern Front, it often failed, while in Europe with a much more developed road network, the Germans did not experience such problems. At the same time, the Volkswagen Kubelwagen was highly regarded by the allies. American and British soldiers loved to use captured military convertibles, and in some cases even swapped their Willys MB for Volkswagen.

In terms of driving comfort and behavior on the road, the Volkswagen Typ 82 confidently bypassed the Willys MB. Affected by the presence of a full-fledged body with doors with a landing as close as possible to ordinary passenger cars. The landing on the famous American jeep was specific and high enough. The independent suspension of the Volkswagen Typ 82 was softer than the Willys MB, and the German car was easier to steer. Of course, the all-wheel drive Willys MB with a twice more powerful engine was the real king of off-roading, but in the conditions of the Western Front and the presence of a developed road network, off-road qualities often faded into the background.

Ctrl Enter
Noticed oshЫbku Highlight text and press. Ctrl + Enter
We are
Chronicles of ceremonial gigs. "Americans" on Red Square70 years ago, 28 June 1946, the first GAZ-M-20 "Victory" rolled off the assembly line
75 comments
Information
Dear reader, to leave comments on the publication, you must to register.