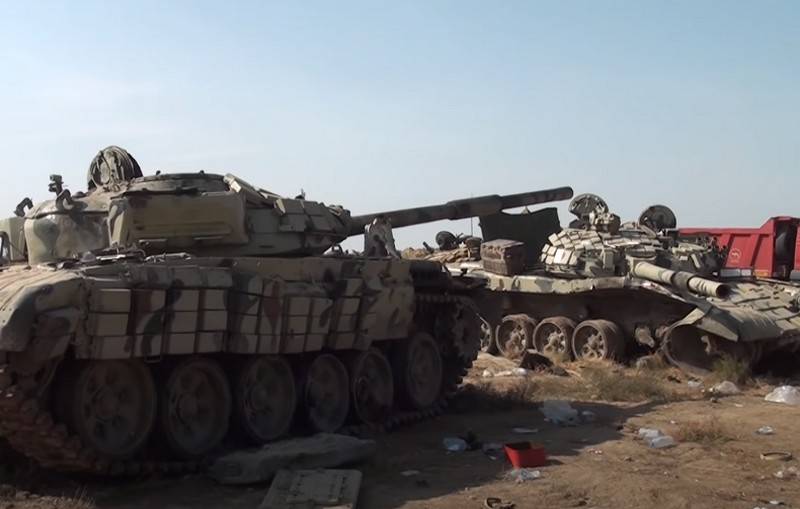 During the fighting in the zone of the Nagorno-Karabakh conflict, the Azerbaijani army destroyed military equipment of the Armenian military worth $ 2,7 billion. Azerbaijani President Ilham Aliyev stated this in an interview with the German edition of ARD.


According to Aliyev, the cost of the destroyed equipment of the Armenian army in the conflict zone in Karabakh has been calculated in Baku. According to preliminary estimates, the minimum damage is $ 2,7 billion.

We made a minimal initial tally of what we destroyed. By the way, I didn't reveal everything that we destroyed. The cost of military equipment and ammunition, which we destroyed and took as war booty, is $ 2,7 billion. Where did they get this money to acquire such weapon? Armenia is a poor country. Its budget is less than $ 2 billion. Its external debt is $ 8 billion.
- added the Azerbaijani leader.

Meanwhile, the fighting in the conflict zone continues, the parties continue to accuse each other of violating the reached ceasefire.

According to the Azerbaijani Ministry of Defense, the enemy carried out artillery shelling of settlements in two regions located near the combat zone in Karabakh.

In turn, the State Emergency Service of Artsakh announced missile strikes by the Azerbaijani military in four cities of Karabakh, including the capital, Stepanakert.

During the day, Azerbaijan continued to keep the peaceful settlements of Artsakh under fire. In the morning Stepanakert, at noon - the cities of Martuni and Martakert, and at the moment Shushi has become the target of various missile launchers fired by the enemy
- said in a message from the service posted on the Telegram channel.
Ctrl Enter
Noticed oshЫbku Highlight text and press. Ctrl + Enter
We are
Aliyev called Turkey a brotherly country for Azerbaijan, and the Armenian Prime Minister - a protege of SorosNew war in the Caucasus be?
157 comments
Information
Dear reader, to leave comments on the publication, you must to register.