In the footsteps of Dr. Gatling. Development of the scheme with a rotating block of barrels 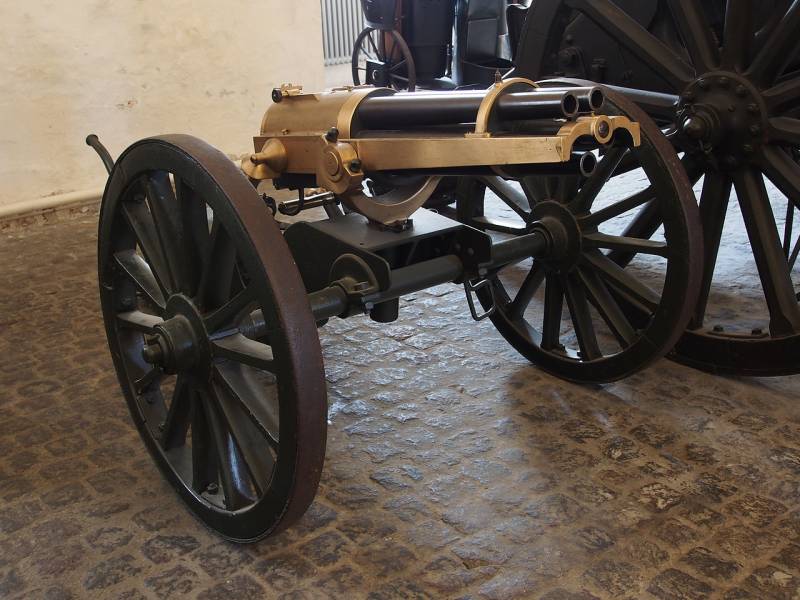 In 1865, the US Army first received a multi-barreled machine gun designed by Richard Jordan Gatling. Due to the original scheme, such weapon showed the highest fire performance. This led to the emergence of interest from the military and gunsmiths - and the process of finalizing and adapting the original design began.

R. Gatling's own company developed and produced new weapons in different calibers, but it was only about machine guns, while the artillery sphere remained uncovered. This omission was corrected in 1872 by the French company Hotchkiss et Cie. Its engineers, led by Benjamin Hotchkiss, seeing the successes of American machine guns, developed their own version of a small-caliber cannon with a rotating block of barrels.

Guns of the Hotchkiss brand were significantly different from the Gatling products - so as not to violate existing patents. So, the rotating block of barrels and an external drive with a handle were preserved. At the same time, they developed their own version of the shutter and trigger mechanism, used together with all the barrels in turn. The ammunition was supplied from the store from above under the own weight of unitary shells. 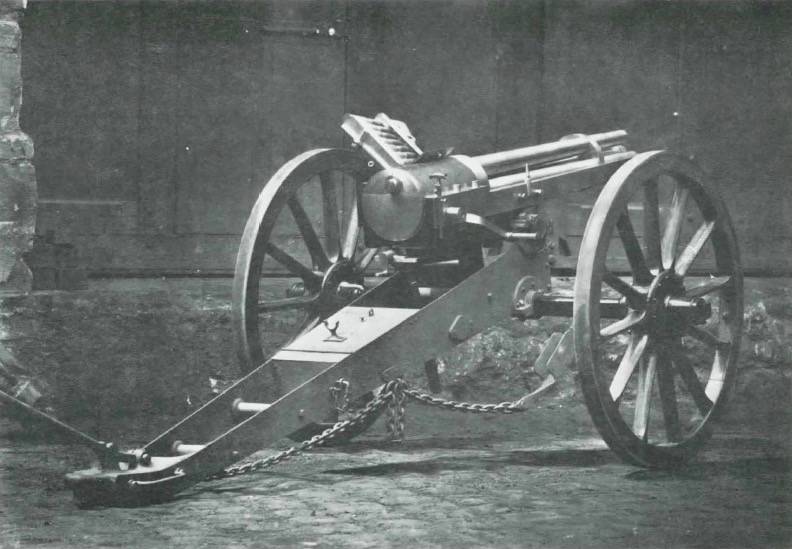 Hotchkiss gun, 1874 Photo Wikimedia Commons
The first version of the Hotchkiss Revolving Cannon received five 37 mm rifled barrels. Its rate of fire reached 68 rounds / min, and the firing range exceeded 1,8 km. Later, a 47 caliber gun with the same number of barrels was developed. The increase in caliber led to an increase in the mass of the barrel block and a decrease in the rate of fire. At the same time, the firing range and the power of the projectile have increased.

Hotchkiss cannons were originally produced on wheeled carriages, incl. with shield cover. For the convenience of transportation and storage of ammunition, the carriage was completed with an artillery front end. Later, pedestal installations for fortresses and ships appeared. Ammunition included unitary shots with fragmentation and canister shells.

Hotchkiss guns entered service with several armies and navies in Europe and America. For example, a significant number of 37-mm guns were purchased by the Russian fleet. They were placed on ships of various types for protection from torpedo boats and self-propelled mines. A high rate of fire and a fragmentation projectile were supposed to ensure the defeat of an enemy boat or gun at a safe distance. The cannons were actively used for several decades, and the leading countries abandoned them only by the beginning of the First World War. 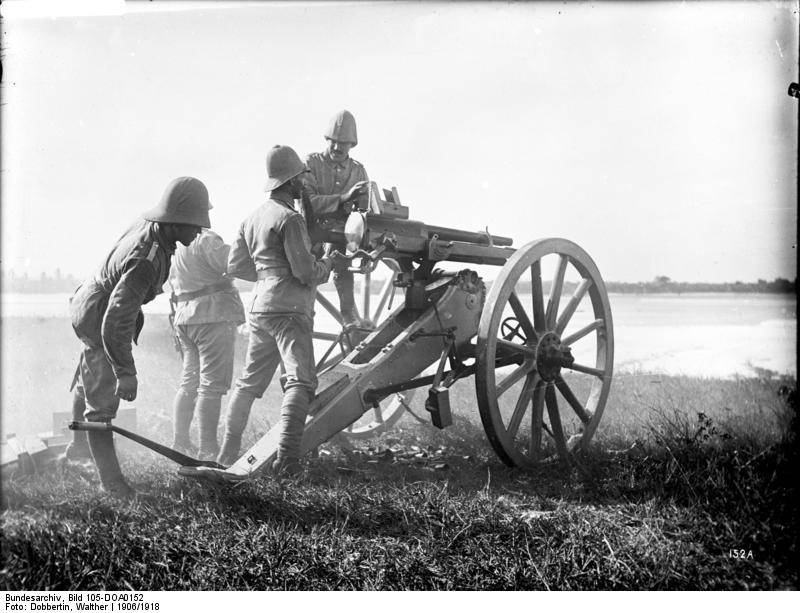 German gunners with a Hotchkiss cannon, Africa, early XNUMXth century Photo Bundesarchiv
B. Hotchkiss's multi-barreled guns in terms of technical and operational features differed little from the original design of R. Gatling. They gave a fairly high rate of fire, showed a high firing range, did not suffer from carbon deposits, etc. At the same time, the processing of the shutter and the trigger did not lead to any problems and even protected the developer company from lawsuits.

In August 1916, the German army ordered a competitive development of a new rapid-fire machine gun for installation on aircraft. Anton Fokker's company has joined this program with their Fokker-Leimberger project. Initially, Fokker and Leimberger planned to make a new machine gun based on the MG 08 product, but then began developing an original design for a standard German rifle cartridge.

To reduce heat loads at a high rate of fire, it was decided to use a rotating block with 12 7,92 mm rifled barrels. The rate of fire was significantly increased with the help of the "split chamber". Two rotors with semicircular trays on the outer surface were placed behind the trunks. When the recesses were aligned, the rotors formed a cylindrical chamber. Behind them was a fixed shutter with the simplest trigger. 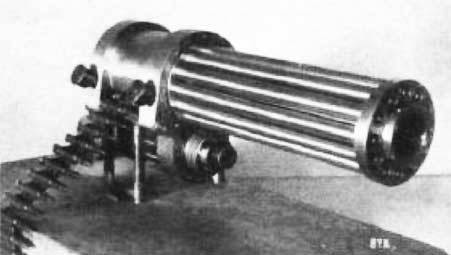 Experienced Fokker-Leimberger machine gun with belt. Photo Alternathistory.com
Rotating from an external drive, the rotors were supposed to tighten the cartridge strip inside the weapon. The next cartridge was brought to the central position and was clamped in the "detachable chamber", followed by a shot. The sleeve was directly in the tape protruding to the other side of the weapon. According to calculations, such a scheme made it possible to obtain a rate of fire up to 7200 rds / min.

In 1916-17. Fokker made an experienced machine gun (or machine guns) and tested it. The design turned out to be efficient, but it was not highly reliable. The unusual design of the chamber did not provide correct coverage of the cartridge, which regularly led to rupture of the cases and stopping during firing. It was not possible to solve this problem at the stage of fine-tuning. Accordingly, the weapon had no real prospects.

After the war, experienced machine guns were disposed of - with the exception of one, which A. Fokker kept for himself. In 1922 he moved to the USA and took the unique piece with him. Later, the only surviving Fokker-Leimberger machine gun ended up in the Museum of the Historical Society of Kentucky.

View from a different angle. The barrel block and the lower rotor of the "split chamber" are clearly visible. Photo Alternathistory.com
It should be noted that the Fokker-Leimberger machine gun scheme was not developed and was forgotten for several decades. The next time the "split chamber" was used only in the American Mark 18 hand-operated grenade launcher, but it remained the only one of its kind.

In the mid-thirties in the USSR, work began on machine guns "heavy fire". To increase the firepower of infantry, combat vehicles and aircraft, it was required to develop weapons with a rate of fire of thousands of rounds per minute. Several design teams took up the solution to this problem, but none of the resulting samples entered service.

The most famous are the works of the Kovrov gunsmith Ivan Ilyich Slostin. In 1936-39. he developed an eight-barreled machine gun chambered for 7,62x54 mm R. Some original ideas were used in the design. In particular, the Slostin machine gun can be considered one of the world's first samples of the Gatling scheme with full automation and without an external drive. 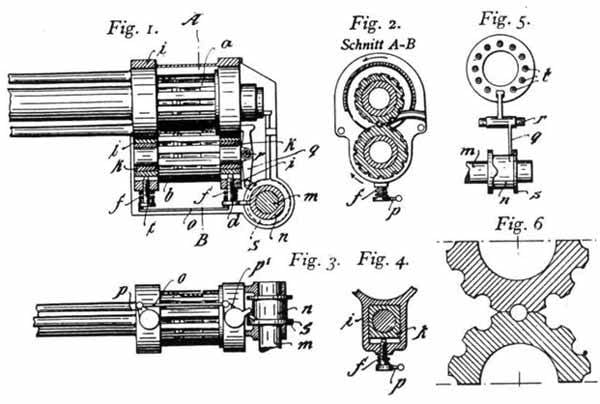 Fokker-Leimberger scheme from patent
The machine gun used a block with eight movable barrels. With the help of rollers, they were connected to a curved rail. When fired, the gas engine forced the barrel to move forward, while the guide provided rotation of the block and preparation of the next shot. The shutter was made in the form of a single part, to which the cartridge was fed - then the chamber was pushed onto it. The trigger was common to all barrels.

During the tests in 1939, a 28 kg product developed a maximum rate of fire of 3300 rds / min. and showed the possibility of a significant increase in the density of fire. However, the machine gun was not reliable enough, and the high rate of fire led to an unnecessary consumption of ammunition. The machine gun was not accepted for service, and its development was postponed.

Work continued only after the war. The reliability has increased, but the rate of fire has dropped by a third. At the same time, the need for an excessively large ammunition stock, ready for use, remained. In the same period I.I. Slostin made a new version of the machine gun chambered for 14,5x114 mm. It was distinguished by the design of a gas engine and a barrel block. Despite the positive reviews and obvious advantages, both machine guns did not enter service, and in 1946 all work stopped. 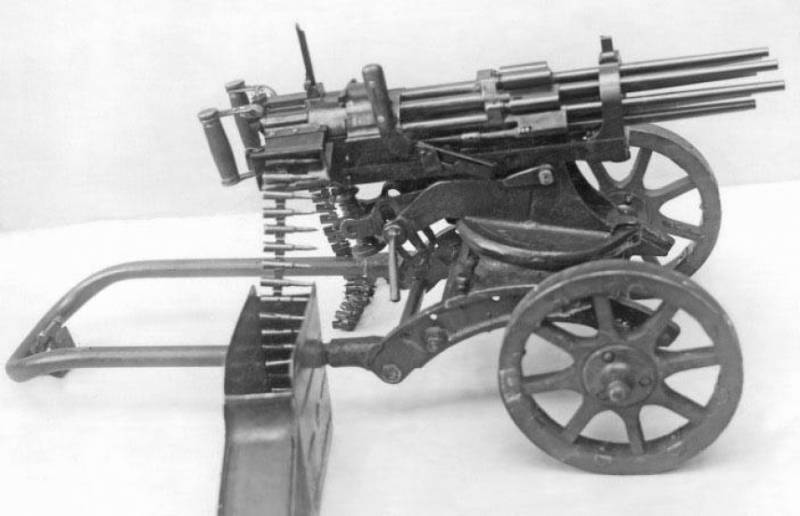 Slostin machine gun mod. 1946 on Sokolov's machine. Photo Oruzhie.info
Simultaneously with Slostin in the late thirties, Mikhail Nikolaevich Blum from Tula worked on the multi-barrel system. His machine gun chambered for a rifle cartridge had 12 barrels and an external drive in the form of an electric motor. The latter was supposed to spin the barrel block up to 1800 rpm, which made it possible to obtain a rate of fire of up to 13-15 thousand rds / min.

During the tests, it was not possible to confirm such characteristics. The electric motor was able to disperse the barrels only up to 1200 rpm, which corresponded to 8,5-8,6 thousand rds / min. At the same time, three motors burned out during the shooting due to the increased load. The refinement of such a weapon was considered inappropriate.

One or another work on multi-barreled machine guns with a rotating block continued in our country until 1946-47. Experienced weapons worked well at the test site, but retained design, technological and operational shortcomings. The army did not adopt any of these models. In this regard, design work stopped for a long time. 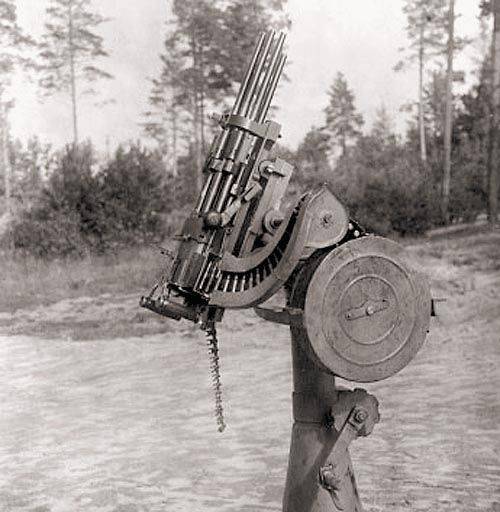 Machine gun on a pedestal for anti-aircraft shooting. Photo Oruzhie.info

The first attempt to improve the Gatling scheme and get fundamentally new capabilities was made shortly after the appearance of the original machine gun. B. Hotchkiss's company has created a number of guns - quite successful in technical and commercial terms. Such results were obtained based on the technologies of the last third of the XNUMXth century.

In the future, the basic scheme was developed, but even the technology of the early XX century. did not provide a complete solution to the assigned tasks. Attempts to increase the rate of fire to record levels faced technological limitations and design problems. As a result, until the middle of the century, multi-barreled systems with a rotating block could not go beyond the polygons, and they did not enjoy particular popularity among gunsmiths.

However, all projects, from the early designs of R. Gatling to the experiments of Soviet engineers, eventually laid the foundation for the further development of weapons. And already in the fifties, a new era began in the field of rapid-fire cannons and machine guns. Multi-barreled systems returned to developed armies, and remain in service to this day.

Ctrl Enter
Noticed oshЫbku Highlight text and press. Ctrl + Enter
We are
Poem about Maxim. Retrospective. Part of 6. From Montigny to HotchkissGuns "Hotchkiss" in World War II
19 comments
Information
Dear reader, to leave comments on the publication, you must to register.