Mirror plane and lasers. Secret prototypes in the Mojave sky 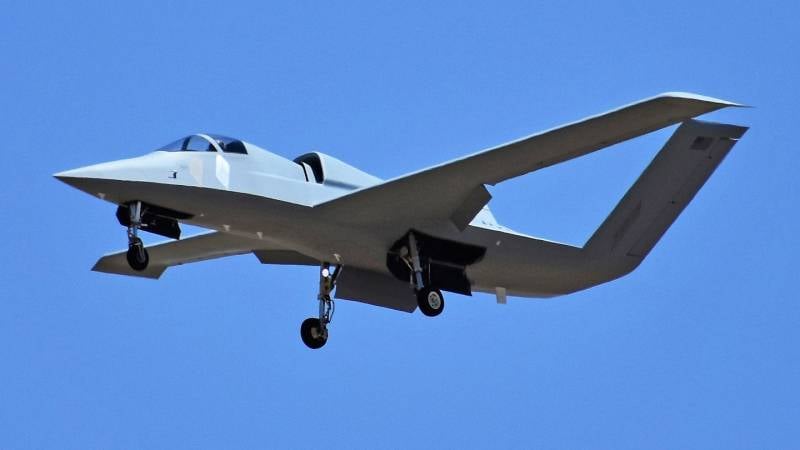 The gray coating on the Model 401 Son of Ares with mysterious rhombuses on the fuselage does not allow the US military experts to sleep peacefully. Source: thedrive.com

Scaled Composites are renowned for their avant-garde flying machines. A few years ago, the office surprised the world with a giant double-fuselage Model 351 Stratolaunch, which never found a niche for itself. The winged giant was originally predicted to be used as a platform for an air launch of space rockets, and now they are trying to switch the car to testing American hypersonic strike systems.

The avant-garde instillation of Scaled Composites was made by Bert Rutan, who entered the world aircraft designers hall of fame. History the company has been running since 1982. During this time, a lot of unusual aircraft came out of the design bureau. Most of them were civilian, but the firm participated in Pentagon tenders on several occasions.

In 1990, Bert Rutan, with like-minded people, built a light attack aircraft ARES (Agile Responsive Effective Support) according to an exotic "duck" scheme and with extensive use of carbon fiber. The military liked the car, but it did not go beyond the demonstration prototype. The only time ARES was in business was when he portrayed the German Messerschmitt Me 263 in the feature film Iron Eagle 3. Nevertheless, it is ARES that can rightfully be considered the predecessor of the main character of this material - the inconspicuous aircraft Model 401 Son of Ares (Son of Ares). Bert Rutan himself has nothing to do with the work on this project - he retired. 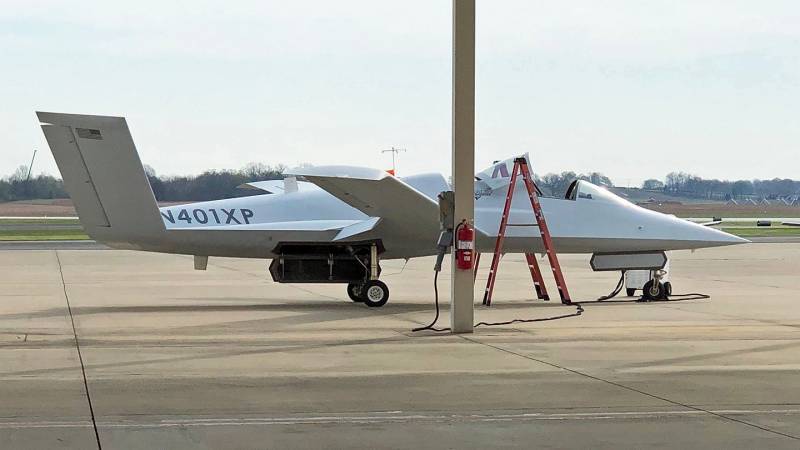 Secret "Son of Ares" allows himself to be photographed freely. Source: thedrive.com
His brainchild, Scaled Composites, is now acquired by Northrop Grumman and is partially engaged in defense research. Actually, the projects of Bert Rutan's office have never been particularly classified, but there is not much information about the "Son of Ares". In fact, everything is limited to dry figures of tactical and technical characteristics. The mass of an empty single-seat aircraft is 1814 kilograms, the maximum take-off weight is 3629 kilograms. The wingspan and length are 11 meters. The power plant is a Pratt & Whitney JTD-15D-5D bypass turbojet engine with a maximum thrust of 1381 kilograms. The Model 401 is slow-moving: Mach 0,6 at an altitude of over 9 kilometers. In cruise mode, the Son of Ares can stay in the air for about 3 hours.

The plane took off for the first time on October 11, 2017. From the very beginning, commentators wondered about the true reasons for the appearance of such an unusual apparatus. One of the notable signs of the aircraft was its resemblance to the Avenger / Predator C attack jet drone from General Atomics. This is indicated by the similar arrangement of the wing and air intake planes of the engine, as well as the general configuration of the fuselage, created taking into account the requirements of stealth. At the same time, it was suggested that the piloted Model 401 (the machines were assembled in duplicate) were intended to test new variants of the Avenger, since at the initial stages of testing, the presence of a pilot in the cockpit seriously saves resources. 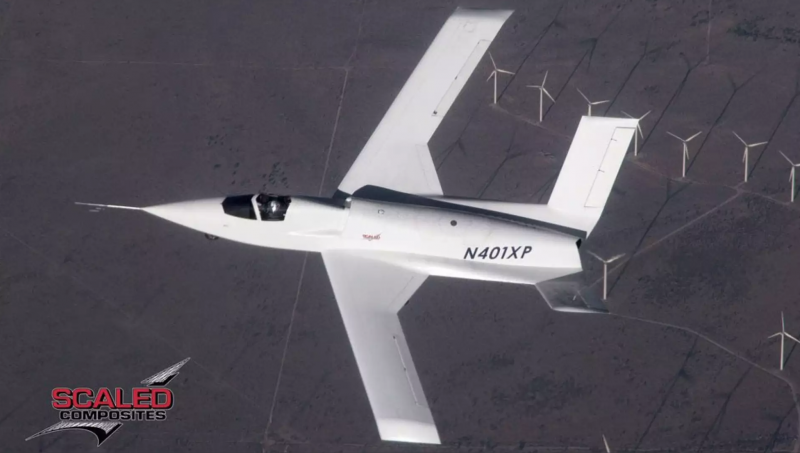 Model 401 Son of Ares at the airfield and in flight. Source: thedrive.com
Added uncertainty and secrecy to the new creation of Scaled Composites: aircraft only occasionally appeared in the skies over the Mojave Desert in California. On Son of Ares, unlike its ancestor ARES, it is not installed weapon and even a place for it, obviously, is not provided. By the way, a couple of prototypes built by 2017 were named "Deimos" and "Phobos" (tail numbers: N401XD Deimos and N401XP Phobos). According to mythology, Deimos with Phobos were the sons of the god Ares. There is speculation that option D is a drone with an opaque dome instead of the cockpit. It is quite probable that the algorithms of interaction "manned vehicle - drone" are being worked out on the machines. What we see now is the example of the Su-57 and the Okhotnik strike UAV.

The first time the Model 401 seriously attracted attention was in the middle of this year, when it took to the air, completely covered with mirror film. The flight of the mirror plane over the China Lake airbase was accompanied by the flight of another exotic creation of the Scaled Composites studio - the Proteus aircraft. The Proteus was carrying a container under the fuselage with signs of optical systems. The logic of those observing this couple was very simple: the specular coating of the experimental Son of Ares is necessary to reflect the rays, and they are clearly not solar. The working hypothesis was testing a secret coating designed to reflect combat lasers. Proteus in this story acts as the carrier of the container with laser weapons. Of course, the power of the emitter was artificially lowered: after all, a manned aircraft acted as a training target.

On the second flight model of the Model 401, a matte gray finish could be seen, the purpose of which can only be guessed at. Given the prevalence and development of infrared guidance systems that can partially devalue stealth technology, it can be assumed that Scaled Composites were testing a new cloaking system. By the way, the escort Proteus could be equipped with thermal imagers paired with lasers. American analysts from TheDrive admit the use of a similar gray coating on aircraft to scatter laser beams of guidance and destruction systems. On some flights of the mirrored and matt Model 401 aircraft, the F-15D Eagle acted as an escort. And under its fuselage was also seen a mysterious container with optical equipment. All indications are that the Son of Ares program is being considered by the military as a testing ground for technological innovations for the Air Force and Navy. 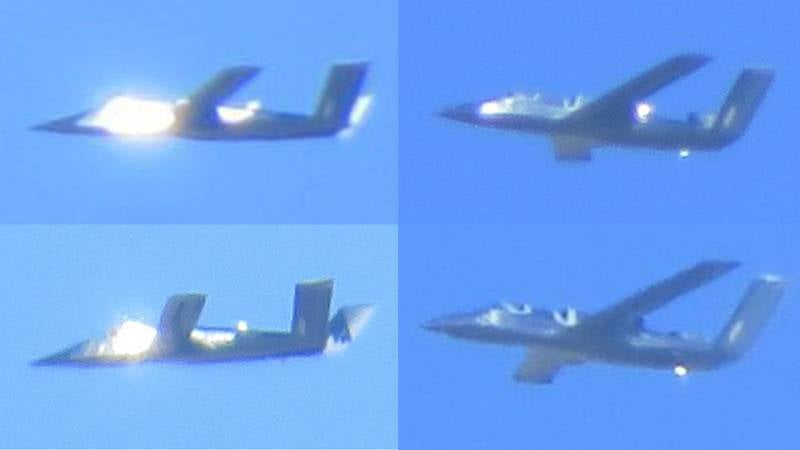 Escort Proteus. Source: thedrive.com
The last time Son of Ares with the onboard N401XP reminded of itself at the end of October, when it lit up in front of paparazzi lenses with a mysterious hardware unit under the cockpit. The flights took place in the Mojave Desert and were accompanied by a completely traditional training T-39 Sabreliner. No specific equipment was seen on the escort plane, so the observers decided that the most important thing was hidden inside a block that looked like an air intake. In this case, the Model 401 acted as a carrier of laser weapons, in flights they worked out the tactics of its use. The characteristic shape of the block probably indicates the need to cool the equipment hidden inside. The Pentagon has already tested similar SHiELD laser modules, which are planned to be taught to shoot down almost ballistic missiles. One of the variants of such a solid-state combat laser could be installed on the Son of Ares. 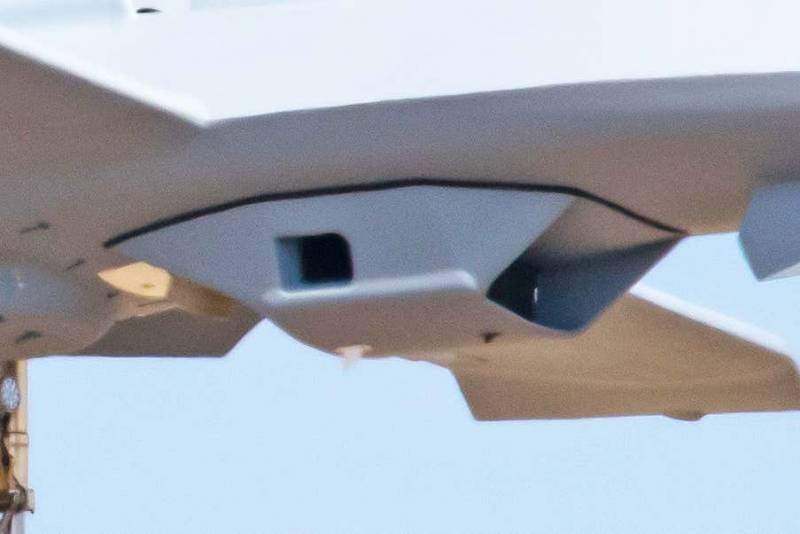 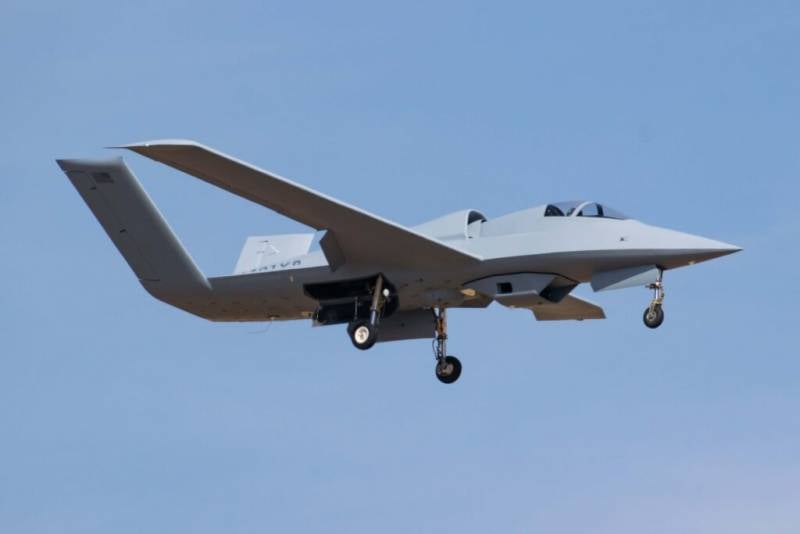 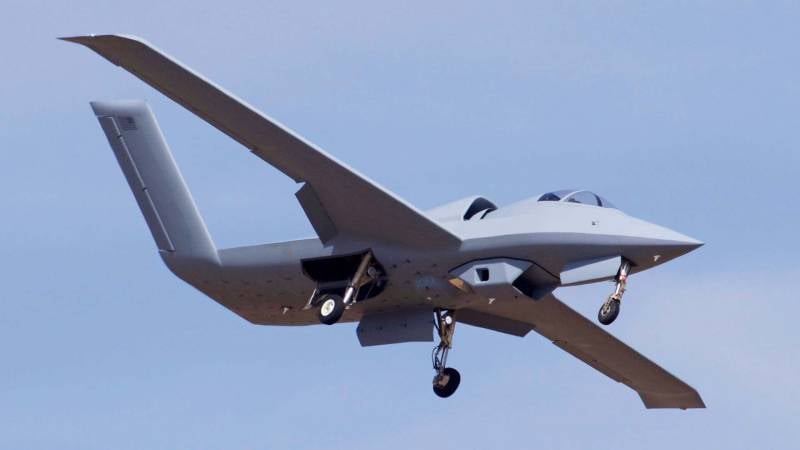 Another irritant for observers is an unknown container under the fuselage of the Son of Ares. It is believed to be a solid-state combat laser. Source: naked-science.ru
The uniqueness of the Model 401 program lies in its ambiguous secrecy. On the one hand, on the official website of Scaled Composites there is not a word about the experimental aircraft, and on the other hand, the aircraft is photographed by everyone who is not lazy. If the owner of the development company Northrop Grumman tries to classify the plane, it turns out very badly. Experienced cars quite legally make daytime flights across the country, while getting into the lenses of photo and video cameras. Also, the reason for the creation of such an expensive aircraft with a carbon fiber fuselage, assembled according to the precepts of the Stealth technology, is not fully understood. It is too expensive to develop such an aircraft solely as a platform for testing new technologies - after all, you can use a lot of other aircraft. The double nature of the use of the experimental aircraft cannot be disregarded. Such "secret" PR can serve to attract the attention of potential investors to the Model 401 civilian use program.

Such an attitude towards the aircraft of the heirs of Bert Rutan's concept cannot but depress. Unique cars with revolutionary technical solutions could not take their rightful place in the world aviation... Probably, a similar fate awaits the "Son of Ares". However, the Model 401 Son of Ares has done one thing for sure: it continues to draw attention to Scaled Composites that extravagant engineers cannot live without.

Ctrl Enter
Noticed oshЫbku Highlight text and press. Ctrl + Enter
We are
Stratolaunch: a new level of American hypersonic aircraftAerospace Center "Mojave"
1 comment
Information
Dear reader, to leave comments on the publication, you must to register.