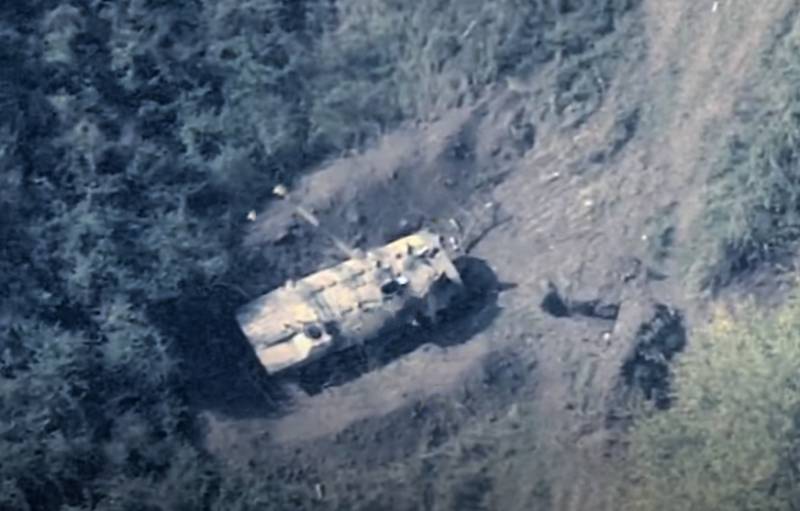 The Azerbaijani army continues to make attempts to move towards the so-called Lachin corridor - a road connecting Armenia with the unrecognized Nagorno-Karabakh Republic through Berdzor (Lachin). Recently, the Azerbaijani side has intensified shelling of Armenian positions with the use of artillery, both cannon and reactive.


At the same time, it is obvious that drones of the Azerbaijani armed forces play a special role in reconnaissance of the positions of the NKR troops. With their help, in addition to reconnaissance, adjustments are made to firing at enemy positions.

The Azerbaijani Ministry of Defense is showing another video, where the results of the strikes were filmed using a drone:


From this video it becomes clear that in the conflict zone of the NKR there is a situation when the ground forces are practically deprived of not only air support, but also are not provided with means of suppressing the activity of drones. What this leads to can be seen in the presented frames.


Both single and group targets are destroyed. At the same time, the destruction is carried out with high efficiency at night, which makes it extremely difficult to regroup Armenian forces and assets in the conflict zone. In fact, any movement is monitored from the air, data is transmitted to the command center, followed by strikes, leading to the destruction of both military equipment and personnel in well-equipped positions.

Actual control of the airspace in the conflict zone in Karabakh ensures success for the Azerbaijani troops on the ground. This is clearly demonstrated in the above videos of the Azerbaijani military department.
Ctrl Enter
Noticed oshЫbku Highlight text and press. Ctrl + Enter
We are
Reports from the militia of New Russia for 27-28 September 2014 of the yearNew war in the Caucasus be?
119 comments
Information
Dear reader, to leave comments on the publication, you must to register.