Woe to the vanquished ... What awaits Nikol Pashinyan in the event of the capture of Nagorno-Karabakh by Azerbaijan 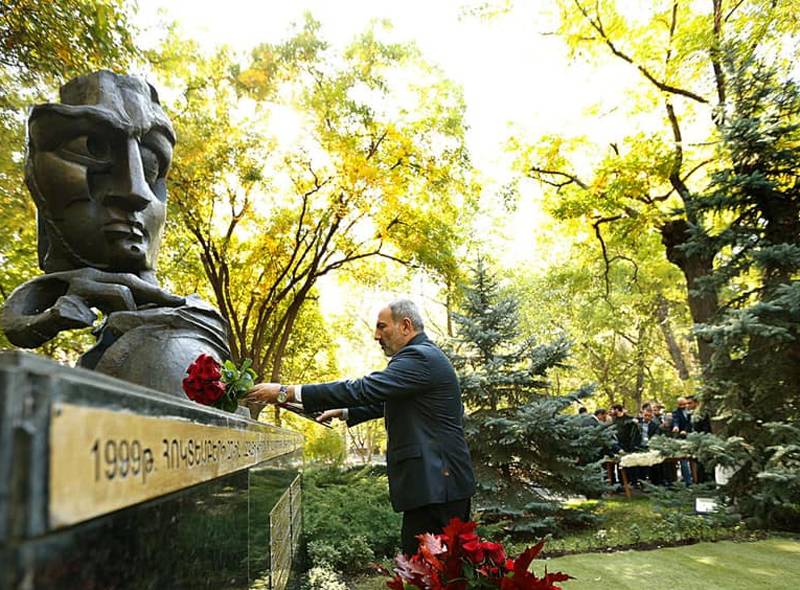 The seizure of the entire territory of Nagorno-Karabakh by the Azerbaijani army, which does not even think of stopping its relentless attack on its defenders, is turning from the least likely scenario of the development of the conflict into a completely admissible reality. It is clear that if it is implemented, it will be a matter of a crushing military defeat not only of Stepanakert, but, first of all, of Yerevan. What does such a turn of events promise the local authorities and, first of all, the leader of the state?


Judging by the information background that we can observe today, nothing good. This is evidenced by both the comments of numerous experts and the statements of Armenian politicians regarding the Prime Minister of the country Nikol Pashinyan, which literally every day acquire an increasingly harsh and categorical tone. We can start here with the fact that it is the current head of government that a large number of compatriots (and not only them) consider the direct culprit of the fact that Azerbaijan in general decided to unleash a war.

Pashinyan is reproached for having managed to quarrel with all of Armenia's allies, or at least cool relations with them, thereby reducing the level of support for the country. That, they say, is why Aliyev, pushed by Erdogan, plucked up the courage to attack. At the same time, as you might guess, it is primarily about Russia. Calling the prime minister her enemy, of course, is by no means possible, but ...

Carried away by settling old scores with his offenders and political opponents, Pashinyan encroached on too many of those with whom Moscow had friendly and warm relations .. And at the same time, he also ignored the rather transparent hints from the Kremlin about what went too far and what time it would be temper the ardor and stop. Generally speaking, the “fight against corruption” that has turned into open repression and the personnel policy of this leader raise a lot of questions both in Armenia itself and abroad.

In this case, it is not at all good for Pashinyan that the natives of Nagorno-Karabakh and participants in the previous conflict, victorious for Armenia, became the targets of his persecution. Robert Kocharian and Serzh Sargsyan, regardless of the accusations of economic fraud or abuse of power, were perceived by Armenians as heroes of that war. Pashinyan, on the other hand, against the background of these people subjected to persecution, does not look at all the best at the moment.

As far as is known, representatives of 16 Armenian political parties called for the dissolution of the current government and the resignation of its head two weeks ago. Instead of these would-be leaders, according to politicians demanding a change of power, in the current critical situation, a special temporary committee or operational headquarters should be set up, created with the involvement of professionals, primarily the military, who may be able to turn the tide.

Open statements about Pashinyan's complete inability to hold the reins of government and effectively lead the country in wartime are being heard more and more loudly. This statement was made, for example, by one of the leaders of the National Agenda party Avetik Chalabyan. They understand that the list of those who reproach the prime minister with absolute incompetence (or even generally inappropriate behavior and almost “criminal” actions) is far from exhausted.

One can hardly doubt that the seizure of Nagorno-Karabakh by Azerbaijan will be perceived by all, without exception, Armenians as a national catastrophe and a grave national disgrace. In such cases, as a rule, they do not do anywhere and never without appointing the "main culprit" for the defeat received. And, to all appearances, the candidacy for this disreputable role has not only been found, but approved. In any case, the names of other state or military leaders who could be blamed for the impending disaster (at least to the same extent as Pashinyan) are not even named in Armenia.

What will happen literally immediately after the Azerbaijani flag hovers over Stepanakert? I am sure that mass disturbances, street riots and other manifestations of popular anger are guaranteed. And here the prime minister will be very lucky if he is simply thrown out of the office or even relatively culturally arrested by the military who are putting things in order in the country, and, most likely, the matter will end with the fact that power, albeit for a while, will pass to them. In such truly dramatic and crucial moments for the whole people, overheated citizens in a fit of passions can beat them to death by storming the government residence. Examples are endless.

However, it is more likely that Pashinyan, if he is not smart enough with a very bad development of events in Nagorno-Karabakh, to leave the country in advance or at least take refuge in the US embassy, ​​can expect a trial at which all those who not so long ago found themselves behind bars by his grace. But the question in this case will not be about "corruption", but about betrayal of national interests, the collapse of defense capabilities and the like, which may result in an extremely harsh sentence.

One thing can be said with full confidence: the chances of staying in power for Nikol Pashinyan are extremely low already now. In the event of a military victory of Azerbaijan, he will need to worry no longer about the prime minister's chair, but about the preservation of life and freedom.

Ctrl Enter
Noticed oshЫbku Highlight text and press. Ctrl + Enter
We are
A great interview with Sergey Lavrov: about Ukraine, Obama and IranWhat you didn't want to know about England
238 comments
Information
Dear reader, to leave comments on the publication, you must to register.