How the mediocre Italian blitzkrieg failed in Greece 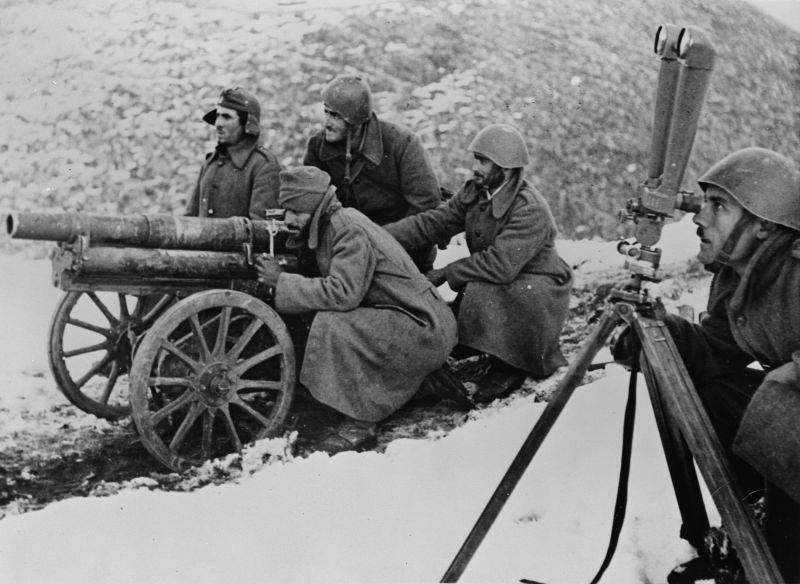 80 years ago, Italy attacked Greece. World War II came to the Balkans. The Greeks defeated the Italians. Hitler had to intervene to support Mussolini.

Using the successes of Nazi Germany, the Italian leadership stepped up the implementation of their plans to create a "Great Italy". In July-August 1940, Italian troops attacked the British in East Africa and captured parts of the territory, Kenya, Sudan and British Somalia. However, the Italians were unable to pose a serious threat to British interests in East Africa. In September 1940, the Italian army from Libya invaded Egypt to reach the Suez Canal. The Italians advanced somewhat, taking advantage of the weakness of the British in this direction, but soon their offensive died out. That is, the Italians did not achieve their goals in East and North Africa (How Mussolini Created the "Great Roman Empire"; Italian invasion of Somalia and Egypt).

Another strategic direction for Italy was the Balkans. Rome claimed the western part of the Balkan Peninsula. In 1939, Italy occupied Albania, gaining a strategic foothold in the Balkans (How Italy occupied Albania). In October 1940, German troops entered Romania, gaining bases in the Balkans. Hitler did not warn his Italian ally about this. This became an excuse for Mussolini to "take the initiative." On October 15, at the Council of War in Rome, it was decided to invade Greece. At the first stage of the operation, the Italians were to strike at Ioannina from Albanian territory, break through the enemy's defenses and then develop an offensive with a mobile group and capture the northwestern region of Greece - Epirus. After that, go to Athens and Thessaloniki. At the same time, a landing operation was planned to capture about. Corfu. The Italian Air Force supported the offensive of the ground forces and were supposed to paralyze Greek communications with their blows, cause panic in the country and disrupt mobilization measures. It was hoped in Rome that the war would cause an internal crisis in Greece, leading to a quick victory with little blood. 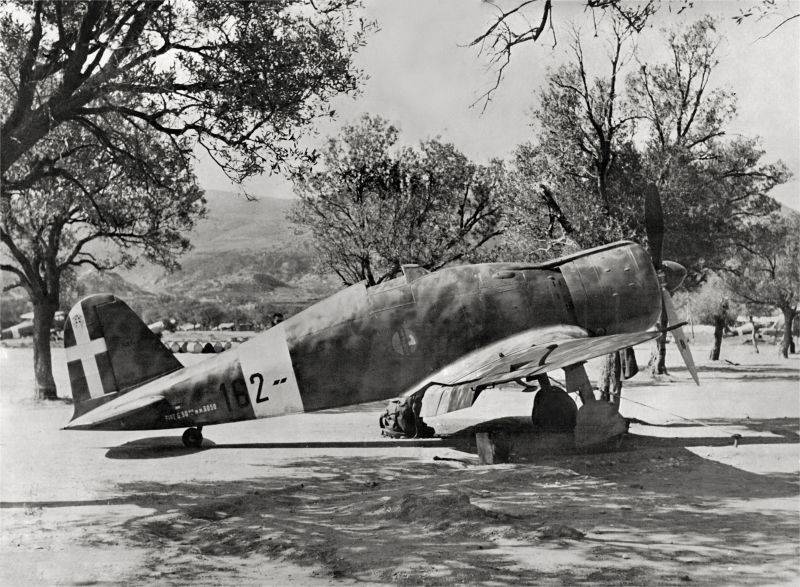 The forces of the parties

For the capture of Greece, two army corps were allocated: 8 divisions (6 infantry, 1 mountain and 1 tank divisions), a separate operational group (3 regiments). A total of 87 thousand people, 163 tanks, 686 guns, 380 aircraft. 54 large surface ships (4 battleships, 8 cruisers, 42 destroyers and destroyers), 34 submarines were involved to support the offensive from the sea, the landing of assault forces and supplies. The Italian fleet was based in Taranto, the Adriatic Sea and on the island of Leros.

The main blow was delivered by the forces of the 25th corps (4 divisions, including the 131st Panzer Division "Centaur") and the operational group in the coastal strip in the direction of Yanina and Metsovon. The 26th corps (4 divisions) was deployed for active defense on the left flank. One division from the territory of Italy was involved in the operation in Corfu. General Sebastiano Visconti Praska was the commander of the Italian troops in Albania (Army Group Albania) and the commander of the 26th corps stationed here.

The Greek forces in Epirus and Macedonia numbered 120. In the course of mobilization, Athens planned to deploy 15 infantry and 1 cavalry divisions, 4 infantry brigades and a reserve of the main command. The Greek fleet (1 battleship, 1 cruiser, 17 destroyers and torpedo boats, 6 submarines) was weak and could not cover the coast. The Air Force numbered about 150 aircraft. In case of war, the General Staff planned to cover the border with Albania and Bulgaria. The Greek covering forces, which were stationed on the Albanian border, had 2 infantry divisions, 2 infantry brigades, 13 separate battalions and 6 mountain batteries. These troops counted 27 thousand soldiers, 20 tanks, over 200 guns and 36 aircraft. 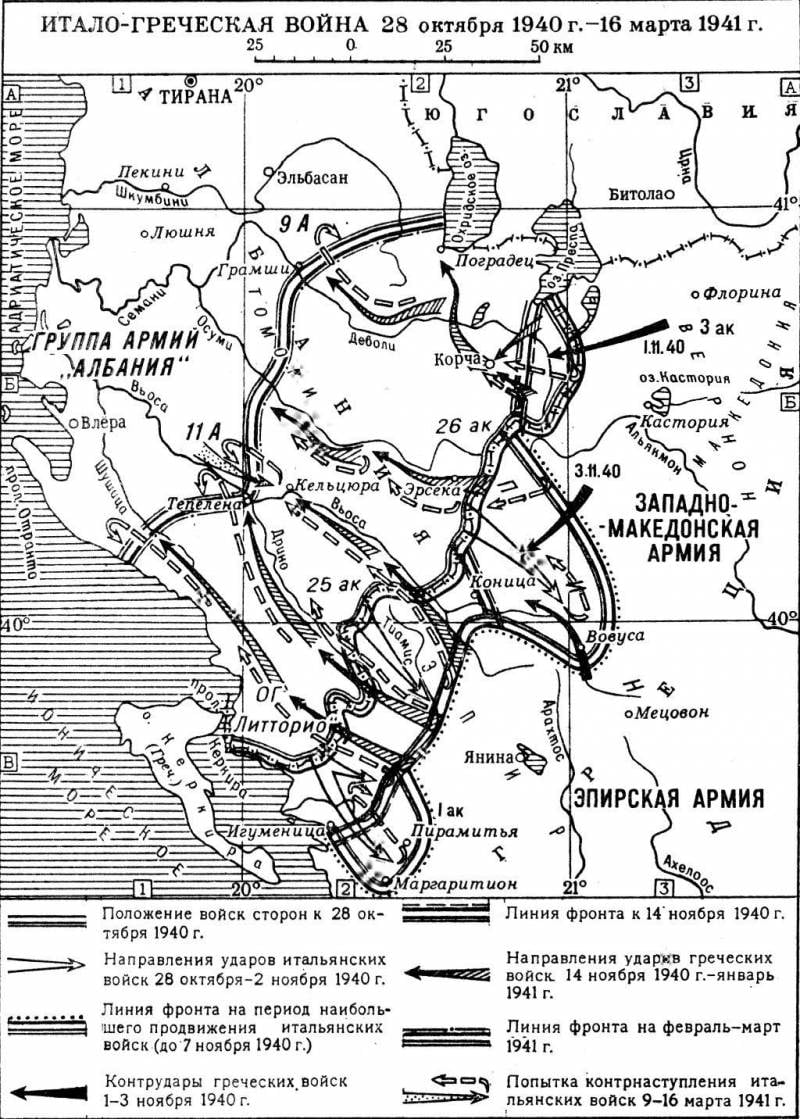 Failure of the Italian Blitzkrieg

On the eve of the invasion, Rome gave an ultimatum to Athens: permission to deploy Italian troops at important facilities (ports, airfields, communications centers, etc.). Otherwise, Greece was threatened with war. The Greeks refused - the so-called. Okhi Day (Greek "No"). On October 28, 1940, Italian troops invaded Greece. In the early days, they met almost no resistance. The weak barriers of the Greek border guards were withdrawing. With a great superiority in forces, the Italians advanced to the Tiamis River. But then the covering troops entered the battle, reinforced by 5 infantry and 1 cavalry divisions. They gave battle to the invaders.

Noticing that the enemy was weaker than expected, on November 1, 1940, the Greek commander-in-chief Alexandros Papagos gave the order to launch a counteroffensive. The Greeks delivered the main blow to the enemy's left flank. As a result of two days of fighting, Italian troops in the Kochi region were defeated and were driven back to Albania. The pressure on Italians in Epirus, in the valleys of the Viosa and Kalamas rivers, also increased. The initiative goes to the Greek army. The failure of the Italian offensive was caused by the underestimation of the enemy. The Italian leadership believed that the invasion would cause the collapse of the enemy camp, the resistance would collapse. The opposite happened. The Greek army was greatly strengthened. Her fighting spirit was high, she enjoyed the full support of the people. The Greeks fought for their freedom, honor and independence.

The Italian attack on Greece forced England to pay attention to the Balkans. London in 1939 promised help to Athens. The British have long wanted to gain a foothold in the Balkan Peninsula. However, at first, the British government believed that the Middle East was more important than the Balkans, so it was in no hurry to actively help the Greeks. London rejected a request from the Greek government to send a fleet and Aviation to protect Athens and Corfu. British assistance was limited to sending 4 air squadrons. On November 1, the British occupied Crete, strengthening their position in the eastern Mediterranean. 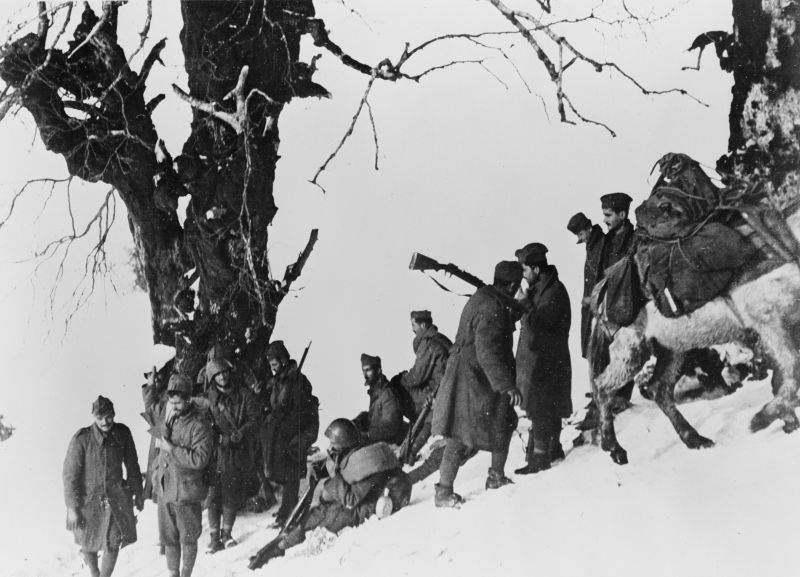 Greek soldiers resting in the mountains during the war with Italy in the winter of 1940-1941. 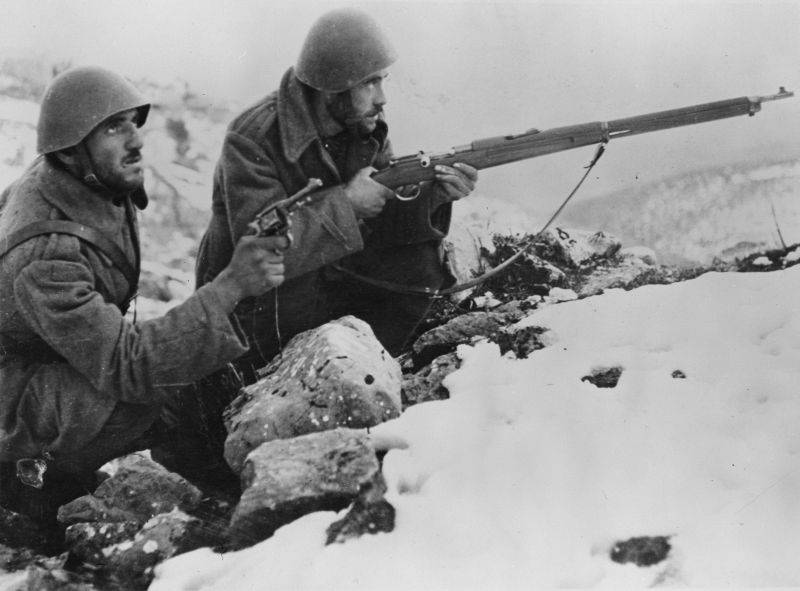 Greek soldiers in battle in the mountains during the war with Italy
The Italians did not succeed in an easy walk. The Italian High Command had to urgently change plans, replenish and reorganize their troops in the Balkans. On November 6, the General Staff issued an order to form Army Group Albania as part of the 9th and 11th armies. Visconti Praska was removed from command, replaced by the Deputy Chief of the General Staff, General Ubaldo Soddu. On November 7, the Italians stopped active operations and began to prepare for a new offensive. There was a lull at the front.

On November 14, 1940, the Greek army launched an offensive in Western Macedonia. Soon the Greeks were advancing along the entire front. On November 21, General Soddu ordered the retreat of the Italian army. The Italians left the occupied territories in Greece and part of Albania. The plight of Army Group Albania was so dire that Soddu asked the high command to "mediate" Berlin. However, in Rome they still hoped to win on their own. Italian Foreign Minister Ciano and Mussolini, in negotiations with Ribbentrop and Hitler, refused military assistance to the Third Reich. But they gladly accepted material support.

The Italians tried to create a solid line of defense, deployed new forces to Albania. However, the situation could not be reversed. The troops were demoralized, tired, and the supplies were unsatisfactory. Mussolini was angry. Changed commander again. In December, Sodda was recalled, and a new chief of the General Staff, General Hugo Cavaliero, was appointed in his place. In Rome, they knew that Berlin was preparing an operation in the Balkans in the spring of 1941 and wanted to get ahead of an ally. Duce demanded that Cavaliero launch a new offensive. In mid-January 1941, the Italians went on the offensive again, but without much success. The Greek army successfully beat the enemy along the entire front. In early March, when Italy achieved a noticeable superiority in strength (26 divisions against 15 Greek), the Italians attacked again. Mussolini himself arrived in Tirana to oversee the operation. The offensive began on March 9, and there were stubborn battles for several days. The Greeks again repulsed the enemy onslaught. On March 16, the Italians stopped the offensive.

Thus, Italy could not break Greek resistance alone. Rome overestimated its strength and capabilities and underestimated the steadfastness and courage of the Greek people. Despite the superiority of the enemy forces, the Greeks fought bravely for their homeland and gave the Italians a tough rebuff. They skillfully defended and counterattacked, making good use of the terrain. The Italian troops once again showed low combat capability and morale. The mediocre Italian invasion failed. Greece was broken with a powerful blow by the Third Reich - in April 1941. By this time, Italy had over 500 thousand soldiers in the Balkans (against 200 thousand Greeks).

Ctrl Enter
Noticed oshЫbku Highlight text and press. Ctrl + Enter
We are
Army of Kenya. From colonial shooters to modern fighters against terrorismFrom assassination to execution. The path to the death of Benito Mussolini
54 comments
Information
Dear reader, to leave comments on the publication, you must to register.