A key event in the sky over the Astrakhan region. Full-scale tests of 9M317MA missiles confirmed the unique feature of domestic air defense systems 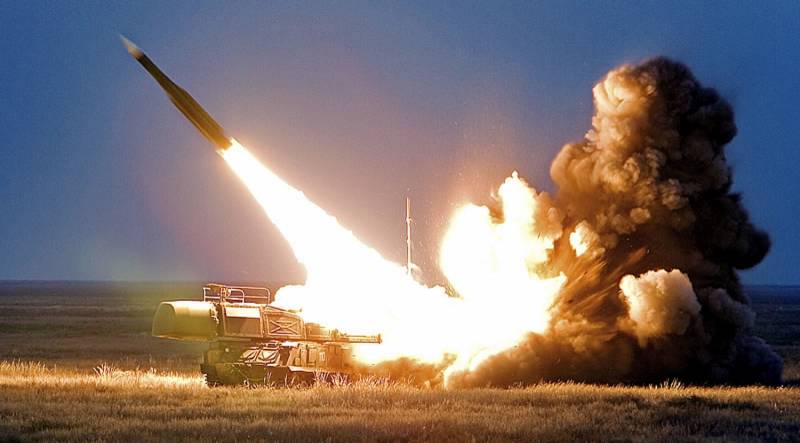 Undoubtedly, one of the most indicative and important for expert analysis of the episodes of the recent exercises of the mixed anti-aircraft missile brigade of the air defense forces of the Russian ground forces at the Kapustin Yar training ground is the successful interception of one of the four types of small air targets of the 9F6021E Adjutant target training complex by the 9M317MA medium-range anti-aircraft guided missile included in the ammunition load of the Buk-M3 self-propelled military air defense system. The most notable details of this interception, which provoked numerous discussions in observing circles, were: the distance to the destroyed air target, which, according to the Russian Defense Ministry, was about 40 km, as well as the operating height at the time of interception, barely reaching 10 meters (product carried out the flight in the terrain bend mode).


Based on the fact that the range of direct radio visibility of the 21S9M illumination / target designation and guidance radar placed on a 36-meter telescopic lifting and turning device is no more than 32 km (in relation to air objects, the trajectory of which runs at a height of 10 m), some observers-regulars of the "Military Review" and other domestic military-analytical portals not only doubted the reliability of the data provided by the press service of the Ministry of Defense of the Russian Federation, but also rushed to accuse the department of either deliberately overstating the tactical and technical parameters of the anti-aircraft missile systems in service with the Russian military air defense funds, or the incompetence of employees (compilers news texts) press service of the Ministry of Defense.

In reality, we are talking about announcing almost the first in modern stories the formation of military air defense and anti-aircraft missile forces of Russia over-the-horizon interception of an ultra-small target of a simulated enemy, achieved thanks to the use of a promising medium-range anti-aircraft missile 9М317МА, equipped with a centimeter (X / Ku-bands) active radar seeker of the "Slate" type from JSC "Moscow Scientific Research Institute "Agat". Developed on the basis of the radio-electronic architecture of active radar seeker 9B1103-M "Washer" with waveguide-slot antenna arrays (installed on RVV-BD / R-37M ultra-long-range air combat missiles) and equipped with an improved transceiver module of a two-way asynchronous data exchange line over protected radio communication channels, the active RGSN of the "Slate" type is capable of receiving data packets with target designation not only from the illumination and guidance radars of the 9S36M complexes of the Buk-M1-2 / 2/3, located on the 9T811 lifting and turning booms and self-propelled firing units of the 9A310M1- line 2 / 9А317 / 9А317М, but also from third-party radar, radio-technical and optical-electronic reconnaissance means of sea / land / airborne.

The aforementioned element of the electronic upgrade of the Slate homing heads provides the 9M317MA anti-aircraft missiles with the ability, firstly, to confidently defeat enemy air attack weapons operating far behind the "screen" of the radio horizon (at a distance of about 50 km from the positions of the Buk-M3 air defense missile launcher), during -second, the continuation of the interception of targets "diving into the shadows" of natural objects on a complex elevated terrain (this ability is very relevant in relation to the Karabakh theater of military operations), thirdly, the destruction of operational-tactical ballistic objects attacking the anti-aircraft missile battalion "Buk -M3 "and the objects covered by it in the dive mode (at angles of 87-90 degrees, outside the elevation sector of the view of the 9S36M divisional guidance radars). What is even more remarkable, using third-party target designation, 9M317MA missiles can be launched from closed positions (without the use of the Buk-M3 complex's combat crew of the radar architecture presented by the 9S36M RPN and 9S18M3 Kupol radar detectors), which by orders of magnitude reduces the probability of detection and identification of the Buk-M3 battalion by means of such enemy electronic reconnaissance means as the in-body RTR 55000 AEELS and CS-2010 Hawk systems of the RC-135V / W Rivet Joint strategic radio / radar reconnaissance aircraft, as well as highly sensitive radiation warning stations / RTR AN / ALR-94 of the 5th generation F-22A "Raptor".

As you know, similar types of active radar seeker are equipped with super-maneuverable long-range missiles-interceptors 9M96E2 / DM (integrated into the ammunition of the S-350 Vityaz air defense missile system and shipborne Redut air defense missile systems), ultra-long-range hypersonic heavy missiles 9M82MV of the C-300V4 anti-aircraft missile systems ( capable of intercepting an over-the-horizon target at a distance of about 300-350 km), which provides anti-aircraft missile forces of the Aerospace Forces, military air defense and naval the fleet Russia has a much wider window of opportunity in erecting powerful territorial and regional anti-missile "umbrellas" over land and sea / ocean theaters of operations than the "window" available to the surface component of the US Navy and the US Army in the European theater of operations.

After all, as you know, the anti-aircraft missiles in service with the US Navy with active RGSN RIM-174ERAM (SM-6 Block IA), although they have a range of about 240-270 km, their flight performance continues to remain at a very mediocre level in comparison with naval versions of 9M96DM missiles, since the gas-jet thrust vector deflection system and aerodynamic rudder blocks do not provide Standards-6 with the ability to maneuver with 60-70G overloads at the terminal trajectory, which excludes even the slightest chance of intercepting such highly maneuverable winged and ballistic anti-ship missiles such as Zircon "And" Dagger ". At the same time, the 9M96DM anti-missile missiles equipped with gas-dynamic "belts" of transverse control engines are able to give odds not only to the low-maneuverable subsonic anti-ship missiles LRASM, but also to such promising hypersonic "instruments" as the AGM-183A aeroballistic missile recently promoted by the Pentagon.

Ctrl Enter
Noticed oshЫbku Highlight text and press. Ctrl + Enter
We are
Unannounced details of the C-400 tests at the Kapustin Yar training ground. What did Favorit-RM target missiles imitate?Situational analysis of the death of the MH17 flight (Malaysian Boeing 777), made on the basis of engineering analysis from 15.08.2014
89 comments
Information
Dear reader, to leave comments on the publication, you must to register.