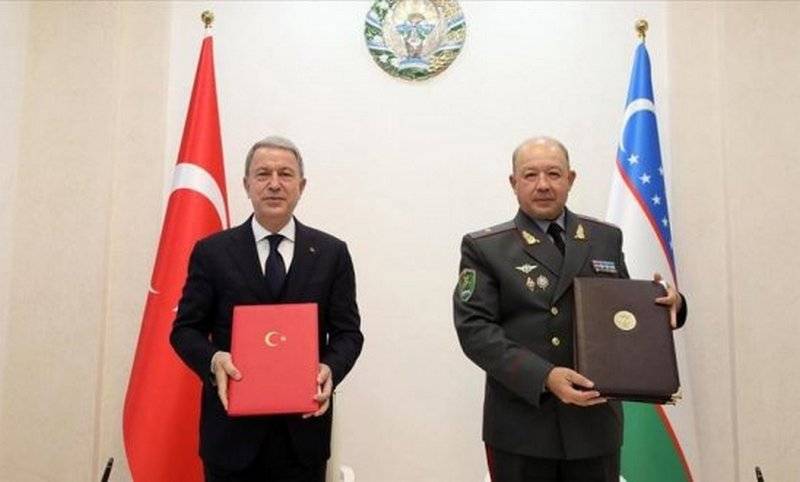 Turkish Defense Minister Hulusi Akar made a number of planned visits to the countries of Central Asia. The main purpose of the trip is to strengthen and expand cooperation in the military sphere.


The head of the Turkish military department, having visited Pakistan, went to Kazakhstan, where he met with the Minister of Defense of the republic Nurlan Yermekbayev. During the meeting, the parties reportedly agreed to further expand military-technical cooperation. Nur Sultan named Ankara a strategic partner.

According to the Kazakh Minister of Defense, Turkey is a strategic partner of Kazakhstan. The countries have signed a number of agreements in the military sphere, including on the mutual protection of classified information.

After negotiations in Kazakhstan, the Turkish Minister of Defense arrived in Uzbekistan, where he held meetings with the President of Uzbekistan Shavkat Mirziyoyev and Defense Minister Bakhodir Kurbanov.

The main topic of the talks was also the state and prospects of military and military-technical cooperation between the two countries. The parties agreed to implement programs in the field of training military personnel, establish contacts between specialized universities, exchange experience in training military units.

Relations between Turkey and Uzbekistan are based on centuries-old commonality storiesAnkara attaches particular importance to this. Ankara seeks to deepen relations with Tashkent in all areas. This includes trade, economic, social and political aspects and, of course, defense cooperation. We have made serious progress
- said the head of the Turkish Ministry of Defense.

The result of the meeting of the defense ministers of Turkey and Uzbekistan was the signing of an agreement on the development of military and military-technical cooperation between Uzbekistan and Turkey.

Ctrl Enter
Noticed oshЫbku Highlight text and press. Ctrl + Enter
We are
Reports from the militia of New Russia for 27-28 September 2014 of the yearInterview of Vladimir Putin with Radio Europe-1 and TF1
147 comments
Information
Dear reader, to leave comments on the publication, you must to register.