Sultan Bayezid I and the crusaders 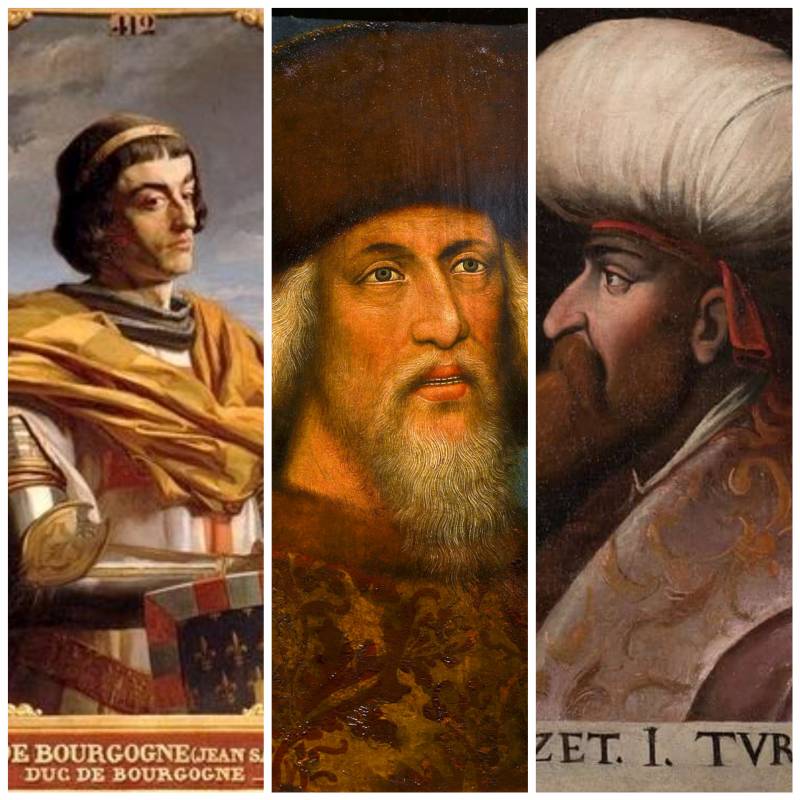 Article "Timur and Bayazid I. Great generals who did not divide the world" was told about the successes of the Ottoman power, headed by Sultan Bayazid I. It seemed that Byzantium was living out its last days and the Ottoman expansion was about to splash out beyond the Balkan Peninsula. Timur, who was to crush Bayazid's power, was dealing with the ungrateful Tokhtamysh at that time.

The troops convince Timur to start a war against Tokhtamysh Khan. Miniature, 1533
At the call of Pope Boniface IX, European crusaders came out against the threat to seize Rome and desecrate the Cathedral of St. Peter Bayazid. 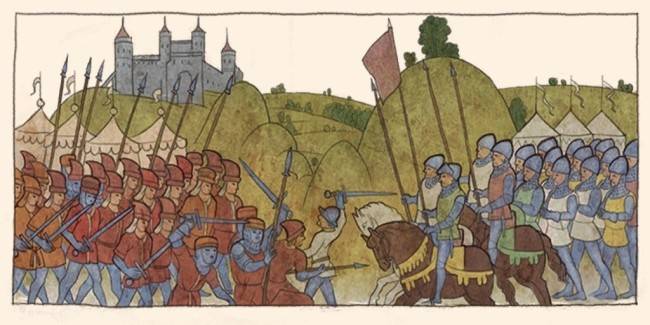 Crusade against the Ottomans

In 1396, a huge army of crusaders (about one hundred thousand people) set out from Buda. This army was led by the King of Hungary Sigismund I of Luxembourg and the 25-year-old son of the Burgundian Duke Philip II the Brave, Jean de Nevers.

In the portrait, the creation of which is attributed to Pisanello, we see Sigismund of Luxembourg in 1433: 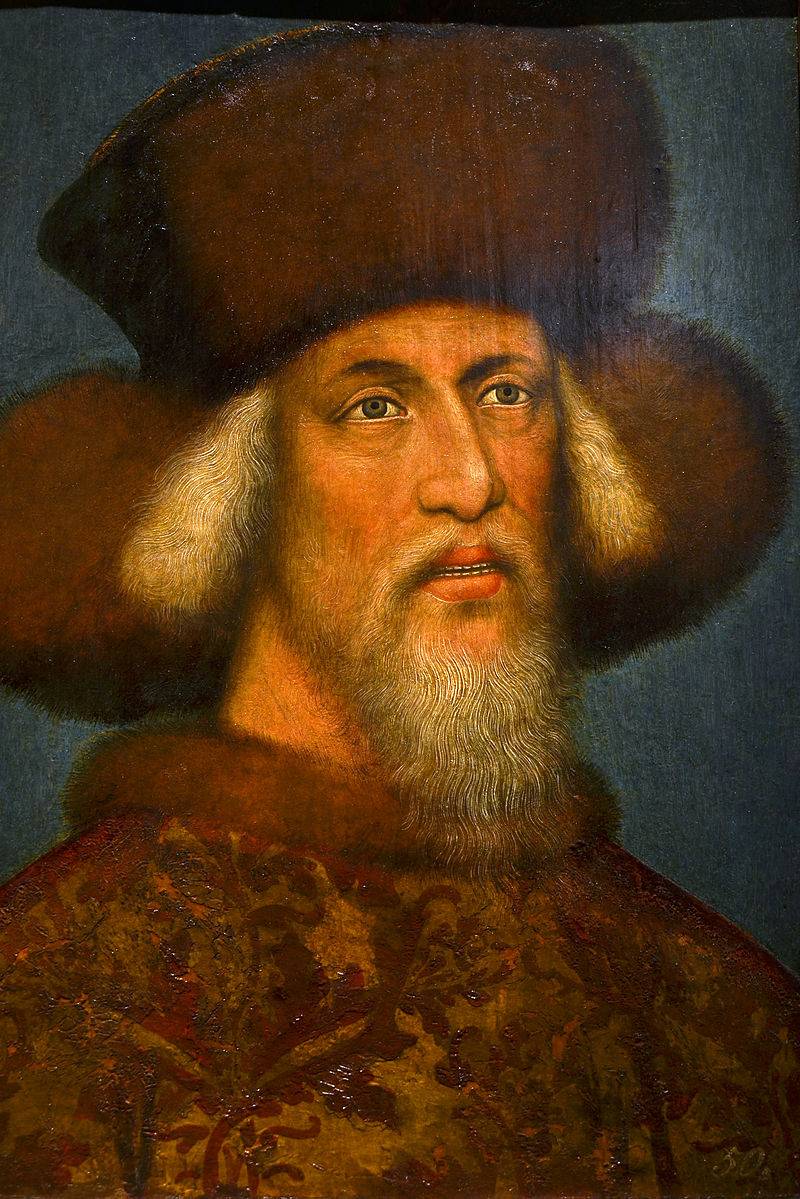 Sigismund of Luxembourg. 1433, Kunsthistorisches museum
В history Sigismund entered under the nickname "Red Fox". Among other things, he became famous for the phrase:

"I am a Roman king and above grammar."
It was he who founded the personal knightly order of the Dragon "to protect the Cross of the Lord and fight the pagans."

Suspected of the murder of his mother-in-law Elizabeth of Bosnia, who was the regent of Hungary.

And in this portrait from the hall of the crusaders at Versailles, we see another leader of this campaign - Jean de Nevers: 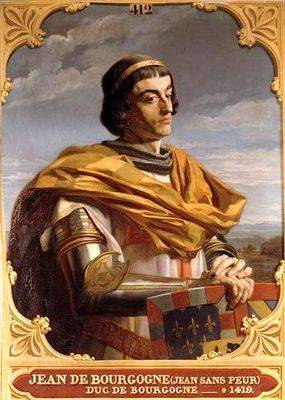 Ironically, it was after the Nikopol battle that ended in defeat that he would receive the nickname "Fearless". Some believe that the nickname was originally mocked.

In addition to the Hungarian army, troops from Burgundy, Hospitallers, Teutons, as well as knights from England, Scotland, Flanders, Lombardy, Germany, Poland, Bohemia, Castile and Leon went on a campaign. From France here, among other knights, were Constable Philippe d'Artois, Grand Admiral Jean de Vienne, Count Angerrand de Coucy (son-in-law of King Edward III of England and Knight of the Garter), Marshal Jean le Mengre Busico - one of the most famous and illustrious knights France, cousin of King Henri de Barre and royal nephew Philippe de Barre. Each of them led his own detachment. The Venetians and Genoese sent their warships, the Genoese also sent crossbowmen, who later played an important family, covering the retreat of King Sigismund and the Grand Master of the Hospitallers to the Danube.

As you can imagine, it was very difficult to manage such a "motley" army, and even with so many noble persons in its composition. And the willfulness of some high-ranking French and Burgundians had very sad consequences. But no one expected a catastrophe, and King Sigismund, having examined the united army, said:

"Even if heaven falls to earth, the spears of the Christian army will hold it."
The plans of the leaders of this campaign were truly grandiose: it was supposed to liberate the entire Balkan Peninsula from the Ottomans, followed by a march to Constantinople. Then it was planned to cross the Hellespont and move through Anatolia and Syria to Palestine - to liberate Jerusalem and the Holy Sepulcher. And then, with victory, return to Europe by sea.

The beginning of the campaign seemed successful: Nish, Vidina, Ryakhovo and some other cities were captured. However, Nikopol was not immediately taken. 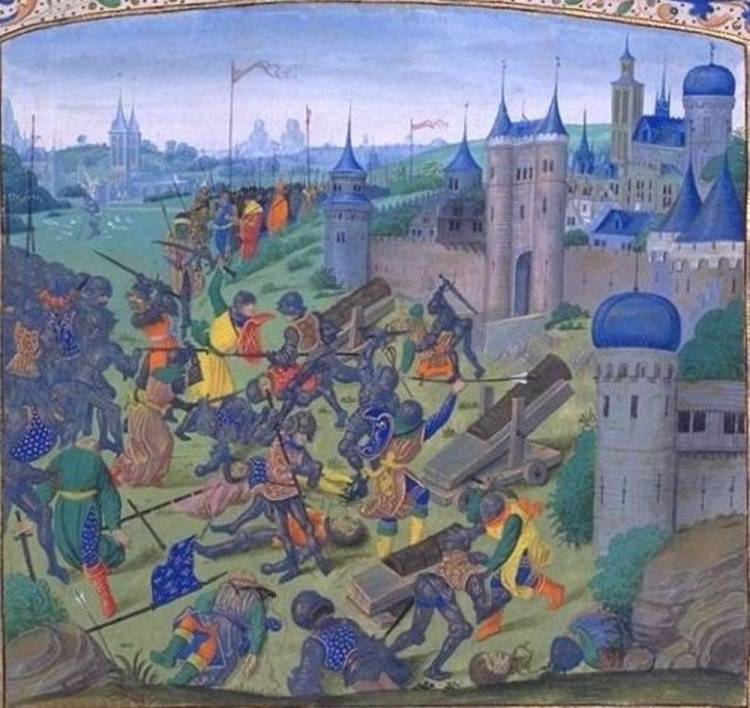 Battle of Nikopol, miniature from the chronicle of Jean Froissard
While the crusaders were besieging Nikopol, the Ottoman troops approached the city, the number of which, according to some sources, reached 200 thousand soldiers, including 15 thousand Serbs of Stefan Lazarevich.

However, it should be said that modern researchers consider the data on the size of the armies of both sides to be significantly exaggerated. Some historians even speak of 12 thousand Christians and 15 thousand Ottomans (Serbs, in their opinion, were about 1). This, of course, does not make the Battle of Nikopol and the victory of the Turks in it less important and significant. 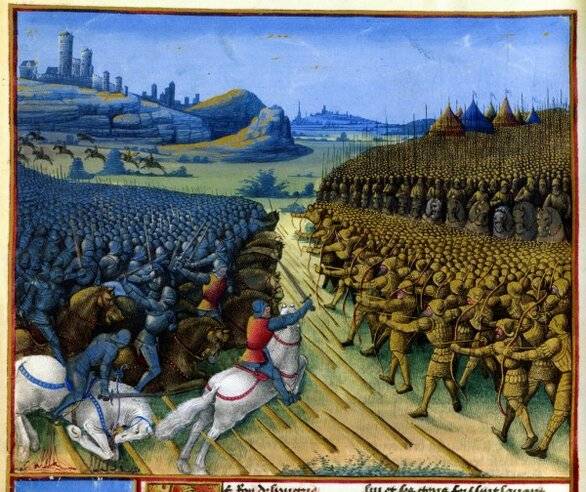 The first to meet with one of the advanced Ottoman units was the detachment of the French Chevalier de Courcy. The victory in this meaningless battle inspired the crusaders, who imagined that all subsequent clashes with the enemy would follow this scenario.

Bayezid, with whom the famous Ottoman commander Haji Gazi Evrenos-bey was then, placed the infantrymen in the center of his position, protected by rows of wooden stakes dug into the ground. The Rumelian (European) cavalry units were placed on the right flank, the Anatolian cavalry on the left flank. Archers and detachments of lightly armed horsemen (akinji) were put forward: their task was to start a battle and send the enemy to the well-fortified main forces of the Turkish army, after which the Ottoman heavy cavalry (sipahi or spahi) had to strike the flanks of the crusaders.

In the center of the Christian army there were French and Burgundy detachments, behind them were the Hungarian, German, Polish troops, Hospitallers and other allies. The right flank was entrusted to the Transylvanians. On the left flank, detachments of Wallachian ruler Mircea I the Old were placed - Bayezid's longtime enemy, who in 1404 would be able to seize Dobruja from the Ottomans weakened by the defeat of Ankara.

Mircea I of Wallach, portrait in the bishopric of Argesh
The Hungarian king Sigismund, who had already dealt with the Ottomans and knew their tactics, sent scouts ahead, with the help of which he hoped to obtain information about the enemy's forces and the location of the Ottoman units. He asked for a postponement of the offensive and was supported by some of the Allied commanders, including Angerrand de Coucy and Jean de Vienne. However, the young knights from France and Burgundy, led by Philippe d'Artois, did not want to wait and moved forward. 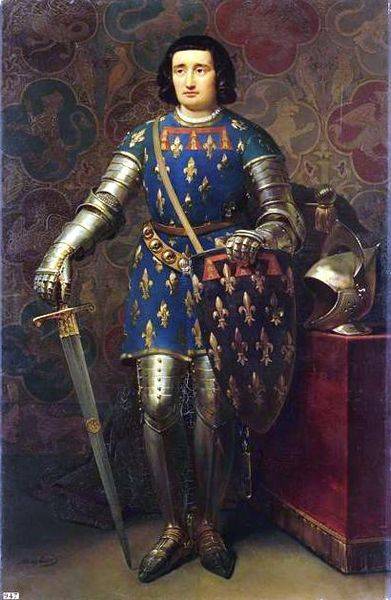 Jean-Baptiste Moses. Portrait of the Constable of France Philippe d'Artois, 1835
Philippe led the vanguard, followed by the main forces of the French and Burgundians, led by Jean of Neversky and Angerrand de Coucy. All the other Crusader units remained where they were, partly because of disagreement with the recklessness of the Allies, partly because they simply did not have time to line up for battle. The Ottoman archers could not inflict much damage on the advancing knights, since their arrows could not penetrate the armor of the Europeans, in the worst case, the advancing ones received light wounds.

The Franco-Burgundian cavalry had to move up a gentle hill, nevertheless, it overturned the Ottoman advance units, but ran into a pre-prepared palisade. Some of the knights lost their horses, others were forced to dismount to dismantle the stockade. In the subsequent battle, the Ottoman infantrymen were defeated and retreated, leaving their positions. De Coucy and de Vienne offered to stop and wait for the Allies' approach, but their sensible advice was not heard. The French and Burgundians continued their offensive and, driving the retreating Ottoman infantry in front of them, reached a flat plateau, from which they saw the enemy's heavy cavalry ready to attack. The blow of the sipahs was terrible, many French and Burgundians were killed, including Jean de Vienne - the oldest of the French knights who took part in that campaign. 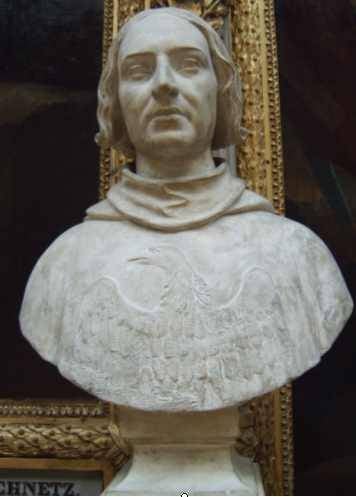 Francis Dure. Bust of Jean de Venier, Museum of French History, Versailles
The rest tried to retreat, but were surrounded and captured.

Seeing the desperate situation of the French and Burgundians, the detachments withdrew from Wallachia, further complicating the already disastrous situation. King Sigismund stood in the center with his troops, Hospitallers and crusaders from Germany, Poland and other countries. He nevertheless decided to attack the already practically defeated Ottomans. The Hungarian horsemen almost overturned the upset their ranks during the pursuit of the vultures - and the fate of the battle was again in the balance. The outcome of the battle was decided by the blow of the Serbian cavalrymen who were in the reserve, who entered the rear of the Hungarian cavalry. Convinced of the complete defeat of their troops, King Sigismund and the Grand Master of the Hospitallers left the battlefield. By boat, they went down the Danube to the sea, where they met with the Venetians, who brought them to Constantinople on their ships. Thus, almost all the French and Burgundians were killed or captured, the Hungarians, Germans, Poles and Hospitallers for the most part retreated and scattered in flight.

Almost all the prisoners of the Christian army were executed, only the most noble of them were redeemed by the king of France Charles VI, paying 200 thousand gold ducats (but two of the most noble lords of France - Philippe d'Artois and Angerrand de Coucy, died in Bursa without waiting for ransom).

At parting, Bayezid invited the freed knights to his feast and invited them to return with a new army. "I liked beating you!" He said mockingly. 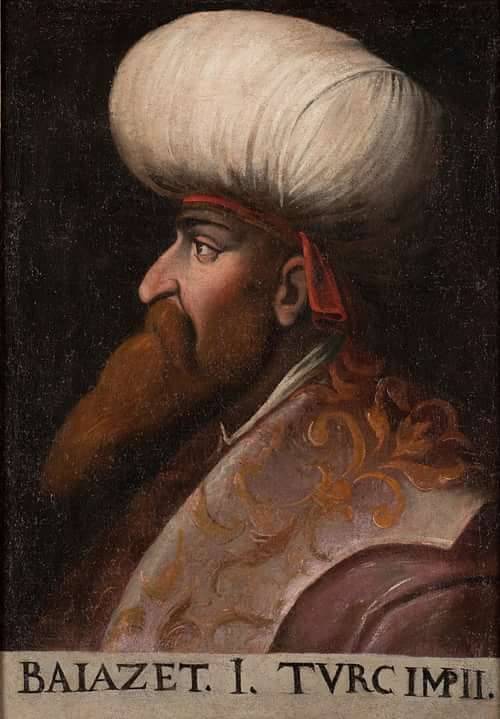 Bayazid Yildirim (Lightning)
Let's say a few words about the future of the leaders of this unfortunate campaign. Sigismund of Luxembourg, as we remember, was taken by the Venetians to Constantinople. On the way to Hungary, he arranged in Croatia the "Bloody Cathedral in Krizhevtsy" - the murder of representatives of the opposition-minded nobility of this country who had arrived for negotiations. He took prisoner and deprived his brother Wenceslas of the Czech crown. In 1410 he became king of Germany, in 1433 he was elected emperor of the Holy Roman Empire of the German nation. It was he who gave guarantees of safety to Jan Hus - and allowed him to be burned at the stake in Constanta. Under him, the Hussite Wars began and ended.

Jean de Nevers, after the death of his father in April 1404, inherited the crown of Burgundy. 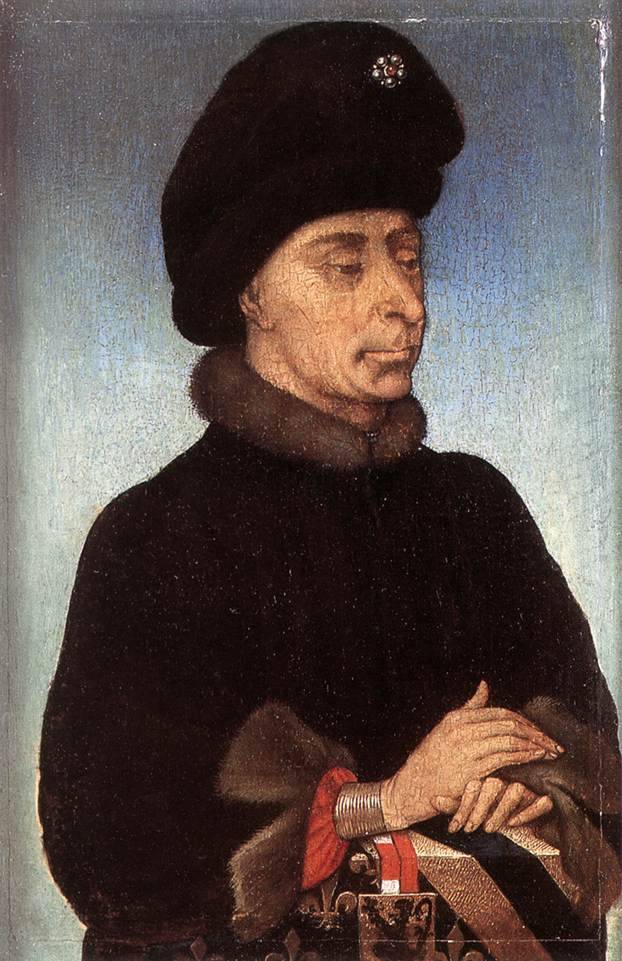 John the Fearless of Burgundy
In France, Jean became an active participant in the struggle of the parties, surrounded by the mad Charles VI. In November 1407, he organized the assassination of the Duke Louis of Orleans, who rivaled him for influence on the king, on the rue Barbett in Paris. And in September 1419, on the bridge, Montero himself became a victim of assassins, who turned out to be the knights from the retinue of the Dauphin (the future King Charles VII).

And now let's return to the Balkans at the end of the XIV century and see that after the Battle of Nikopol, the whole of Bulgaria was under the rule of Bayazid, it will restore its independence only after the next Russian-Turkish war, in 1877.

And Sultan Bayezid again went to Constantinople, who this time saved one of the knights released for the ransom - Marshal of France Jean le Mengre Busico, who (the only one) risked to return and fight the Ottomans again. The squadron led by him defeated the Turkish fleet in the Dardanelles in 1399 and pursued its remnants to the Asian coast of the Bosphorus. Ahead this brave knight had many adventures, ending with the Battle of Agincourt (1415), in which he commanded the vanguard and death in English captivity in 1421.

However, the fate of Constantinople, in general, had already been decided. But fate took pity on the ancient empire for the last time. Salvation this time came from Asia: in 1400, the invincible troops of Tamerlane entered the Bayezid state. 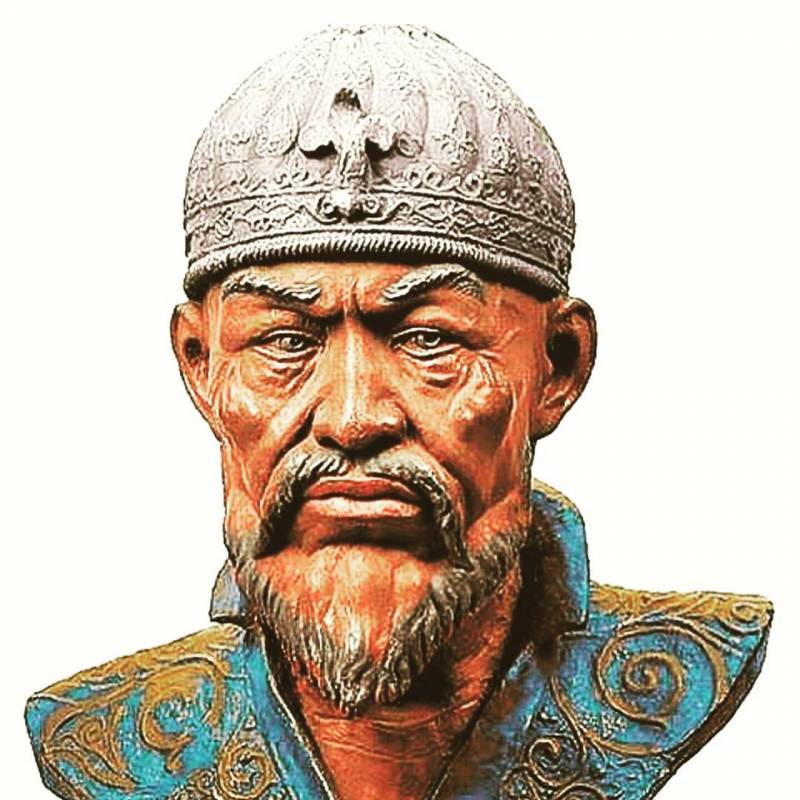 In the next article we will talk about the war between Timur and Bayazid, about the great battle of Ankara and its consequences.

Author:
Ryzhov V.A.
Articles from this series:
Ryzhov V.A. Timur and Bayazid I. Great commanders who did not divide the world

Ctrl Enter
Noticed oshЫbku Highlight text and press. Ctrl + Enter
We are
Timur and Bayazid I. Great generals who did not divide the worldIron Timur. Part of 2
278 comments
Information
Dear reader, to leave comments on the publication, you must to register.