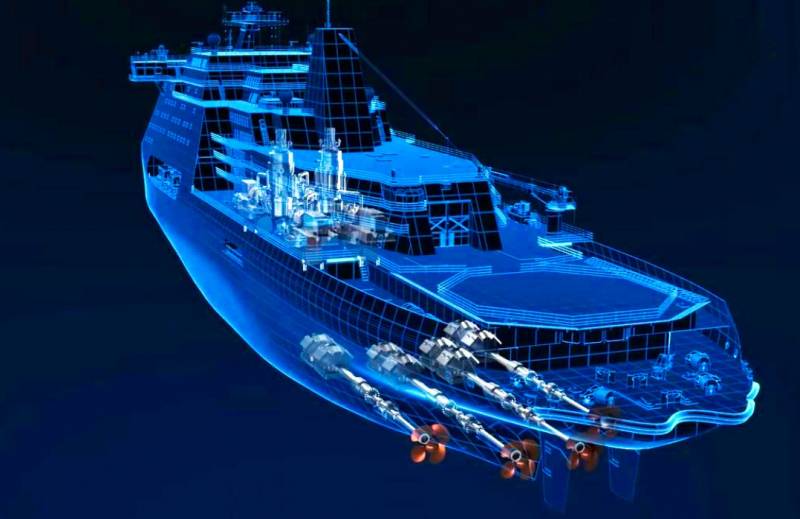 Russia is preparing to build three of the world's most powerful nuclear-powered icebreakers of the Leader project. This is stated in the presidential decree "On the Strategy for the Development of the Arctic Zone of the Russian Federation and Ensuring National Security for the Period until 2035".


As you know, Russia ranks first in the world in terms of the development of icebreaker fleet... No other country in the world, including the United States or Canada with access to the Arctic seas, has icebreakers of the same quality and level as our country. This is cause for pride, but there is no doubt that the constant competition in the Arctic region makes us not stop there and continue the development of the nuclear and conventional icebreaker fleet.

The nuclear-powered icebreakers of the Leader project are capable of providing year-round passage of ships along the Northern Sea Route. The characteristics of the project are impressive: the Leader icebreakers have a shaft capacity of 120 MW, a speed of 22 knots, a length of 209 meters, and a width of 47,7 meters. The displacement of the icebreaker with a draft along the wake line is about 70 thousand tons.

The main components of the icebreaker's engine are a nuclear power plant with 2 RITM-400 reactors, a steam turbine plant with four turbo generators of 37 MW each, an electric propulsion system with 4 propeller motors of 30 MW each. The icebreakers are designed for a service life of 40 years.

Financing of the construction will be carried out exclusively at the expense of budgetary funds in order to exclude possible interruptions and delays. This is not surprising, since the launch of a series of three nuclear icebreakers is of strategic importance for the country in the face of growing competition in the Arctic. 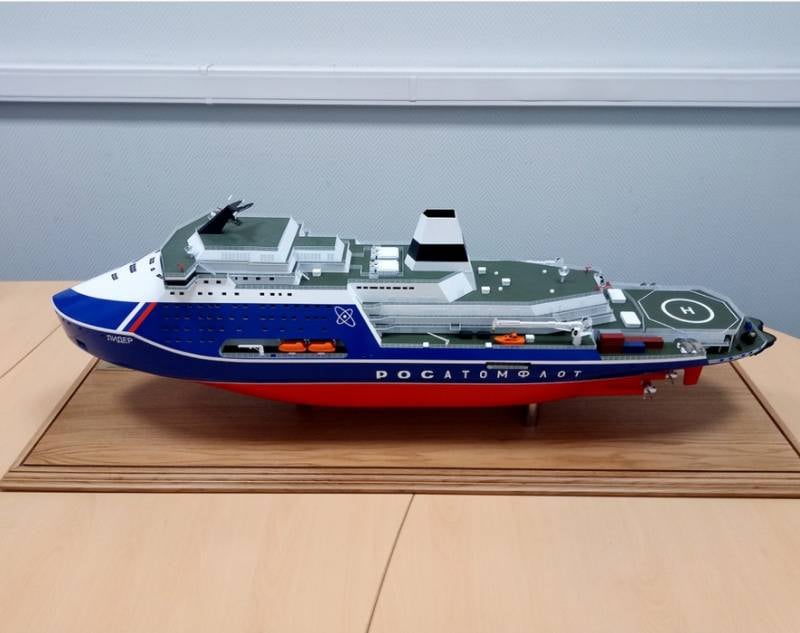 Model of the icebreaker type "Leader". Photo: Wikipedia // PJSC CDB "Iceberg"
In addition to the Leader icebreakers, Russia expects to build 2035 Project 5 icebreakers by 22220 - the largest in the modern world. The length of the icebreaker of such a project is 173,3 meters, and the width is 34 meters. Icebreakers of this type will provide the passage of convoys of ships in the Arctic seas, breaking through ice up to 3 meters thick. First of all, they will have to accompany tankers with raw materials from the fields of Yamal and the Gydan Peninsula, as well as from the shelf of the Kara Sea.

Since the main buyers of raw materials are the countries of East Asia, the icebreakers will follow mainly in the direction of the Pacific region. Their launch is also interesting for Russia from the point of view of additional financial opportunities that are opening up. There is no doubt that icebreakers will play a very important role in the development of other opportunities in the Arctic. Global warming could turn the Russian Far North into a very promising region, where new industrial enterprises, logistics centers and even settlements will emerge. This strategy of the Russian state, by the way, is quite frightening for the Western countries.

At the same time, the West found itself in a strange situation: on the one hand, the construction of new icebreakers cannot please the American, British, Canadian authorities, but on the other hand, without Russian icebreakers, the movement of ships along the Northern Sea Route is currently impossible. In the current situation, foreign shipping companies are forced to admit the established order of things and turn to Russia every time for help in passing the sections of the Northern Sea Route.

Now the main thing for the budget is to find funds for the construction of icebreakers. After all, the cost of the lead icebreaker will amount to 111,524 billion rubles. At least, these are the numbers that are named in the materials for the draft budget of the Russian Federation for 2021 and the planning period 2022-2023.

Ctrl Enter
Noticed oshЫbku Highlight text and press. Ctrl + Enter
We are
About Stalin and KhrushchevWhat you didn't want to know about England
87 comments
Information
Dear reader, to leave comments on the publication, you must to register.