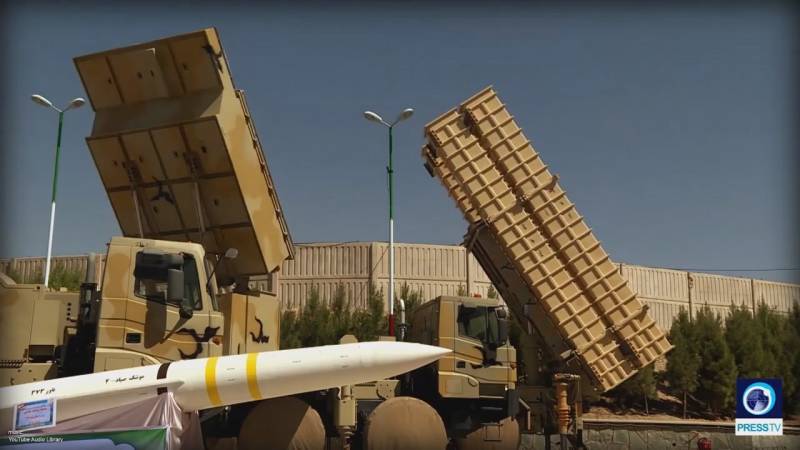 Recently, Iran hosted a major air defense exercise "Defenders of the Skies of Velayat-99". During this event, the calculations of all the main modern anti-aircraft systems of the Iranian army and the Islamic Revolutionary Guard Corps demonstrated their skills. The main novelty of the exercise was the updated air defense system "Bavar-373", first demonstrated at an open event.

From exhibitions to exercises

Various materials on the Bavar-373 project and individual components of the future anti-aircraft complex have been demonstrated by the Iranian industry over the past few years. In August last year, the finished air defense system was officially presented in full configuration. Then it was argued that the complex had already been put into service, put into series and took up combat duty. In addition, it was compared with foreign developments. It was reported that in terms of the general level of characteristics and capabilities, the Bavar-373 corresponds to the Russian S-400 system.

In the recent past, the air defense missile system carried out firing as part of tests. Later, after putting on duty, no missile launches were reported. Last Thursday, October 22, the "Bavar-373" complex was involved in the air defense exercises "Defenders of the Skies of Velayat-99". During this event, various anti-aircraft systems were used, incl. the latest long-range air defense system. 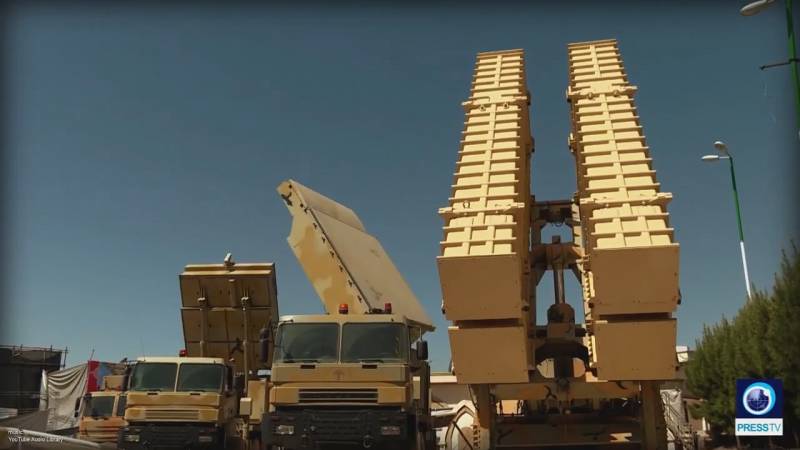 Launcher and radar. Photo by PressTV
All the components of the Bavar-373 system entered combat positions at one of the Iranian training grounds. They were able to timely detect the training target and conduct a successful attack. The target range and other technical nuances were not specified. At the same time, it is necessary to note the fact that in the recent exercises an updated Bavar-373 launcher was used, which had not previously been demonstrated openly.

According to last year's data, the Bavar-373 air defense system includes several fixed assets, together forming an anti-aircraft battery. The complex includes a command post, two radar stations (detection and guidance), as well as six launchers and Sayyad-4 missiles. All main components are made on self-propelled chassis with different carrying capacity and a different wheel arrangement. The air defense system is capable of operating as part of a large integrated air defense system controlled by third-party radars and command posts.

A self-propelled launcher on a five-axle special chassis was demonstrated at last year's presentation. On this machine, behind the cockpit was a volumetric casing of special equipment, and the rear of the cargo platform was given under a lifting unit with attachments for four transport and launch containers of missiles. Thus, one full-strength air defense system carries an ammunition load of 24 missiles. 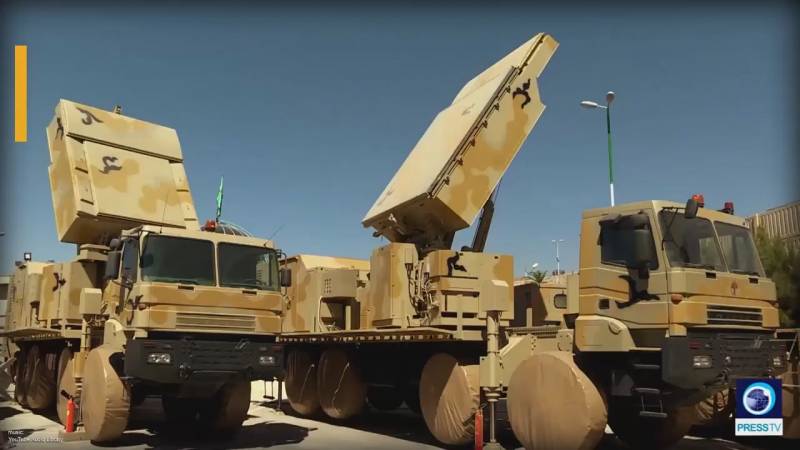 Radars from the Bavar-373. Photo by PressTV
It was reported that the complex's radars are capable of detecting air targets at ranges of up to 320 km and taking them for escort from 260 km. Up to 300 targets are detected simultaneously, followed by 60. One guidance radar provides a simultaneous attack on 6 targets using 12 missiles. The maximum range of destruction is set at 200 km, the maximum height is 27 km. The possibility of firing at aerodynamic and ballistic targets is declared.

At the moment, "Bavar-373" is the most long-range and high-altitude anti-aircraft system of Iranian development. This air defense system is proposed for the protection of strategic objects and should work as an independent means and as a component of an integrated layered air defense system. At the same time, "tabular" characteristics do not yet allow comparing the latest Iranian air defense system with advanced foreign developments. In particular, it is inferior to the Russian S-400 in terms of detection and firing range, the number of detected and fired targets, etc.

During a recent exercise, an updated version of the complex was tested. As you can tell, the standard radar and command post have not changed. The rocket, apparently, also remained the same. At the same time, a combat vehicle with a launcher underwent a major overhaul in the direction of simplification. It has become lighter and more compact, but deterioration in combat qualities is possible. 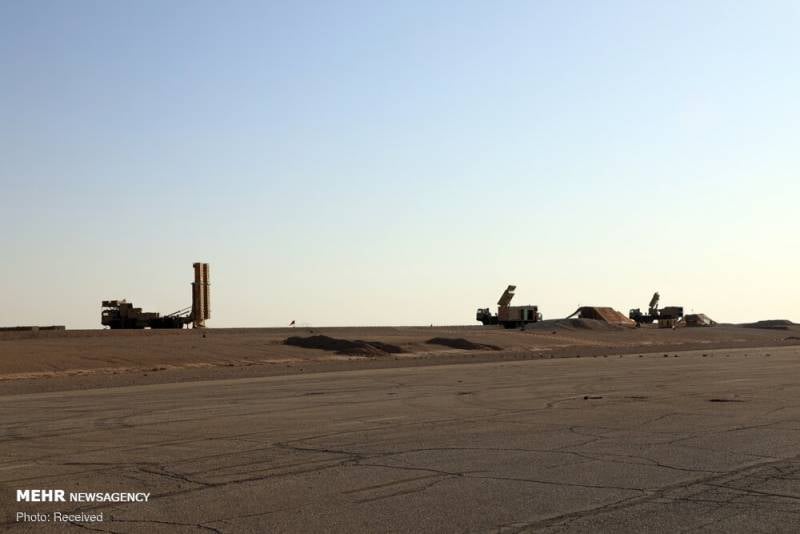 Updated air defense system at a recent exercise. Photo Mehrnews.com
The new launcher is built on an Iranian-assembled four-axle chassis. Probably, due to this, the driving characteristics are improved and the degree of unification with other components of the air defense system increases. At the same time, it was necessary to take layout measures. So, on a five-axle chassis, the necessary units are placed in a casing behind the cab. In the new configuration, some of the covers had to be placed above the cockpit. In addition, the layout of the rear of the car has changed and the overhang has increased.

Launcher revamped slightly. The drive configuration has changed, but the mast and base remain the same. During the exercise, the launcher carried only two transport and launch containers. This can be explained by the absence of the need for a full ammunition load - or by a reduction in carrying capacity and a forced decrease in ammunition.

If the ammunition carried was really reduced, then the deterioration of the combat qualities of the complex is possible. In the original configuration, six launchers carry 24 missiles, and after modernization, their number is halved. As a result, only one salvo at 6 targets is possible, after which the containers need to be replaced. 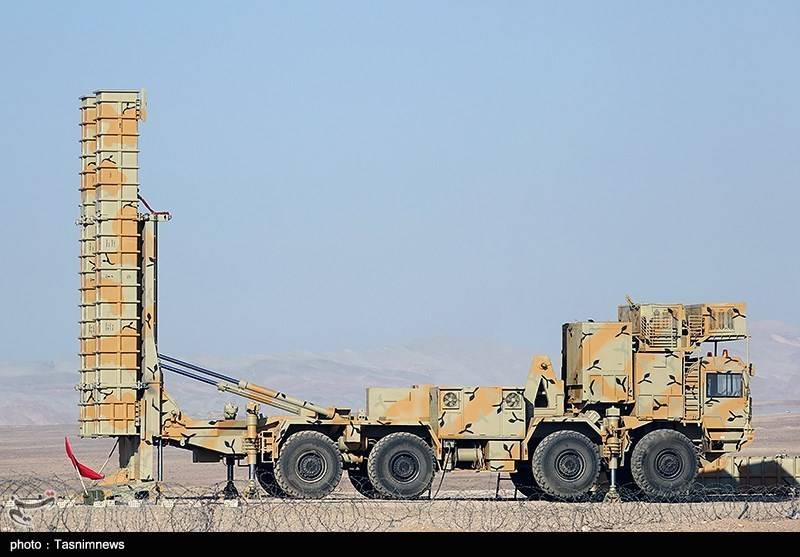 Place in the troops

SAM "Bavar-373" was developed for use in the air defense forces. One of the main tasks of the project was the creation of its own anti-aircraft system, capable of complementing or replacing imported S-300PMU2 systems. At present, it is Russian systems that form the basis of the long-range air defense grouping, but changes are expected in the future.

According to known data, until 2016. Iran received from Russia four divisions of the S-300PMU2 system. The supply of such equipment made it possible to dramatically expand the country's air defense capabilities and provide reliable cover for strategically important facilities. At the same time, a fundamental decision was made to create their own complex with the closest possible capabilities. The result is the current "Bavar-373".

Last year, the Bavar-373 air defense system was adopted and put into production. It is obvious that by now it has been possible to release and transfer to the troops a certain amount of new equipment, but its number remains unknown. We can talk about the presence of at least two kits with different types of launchers. At the same time, some publications give more daring estimates - up to 10-12 batteries in several divisions. 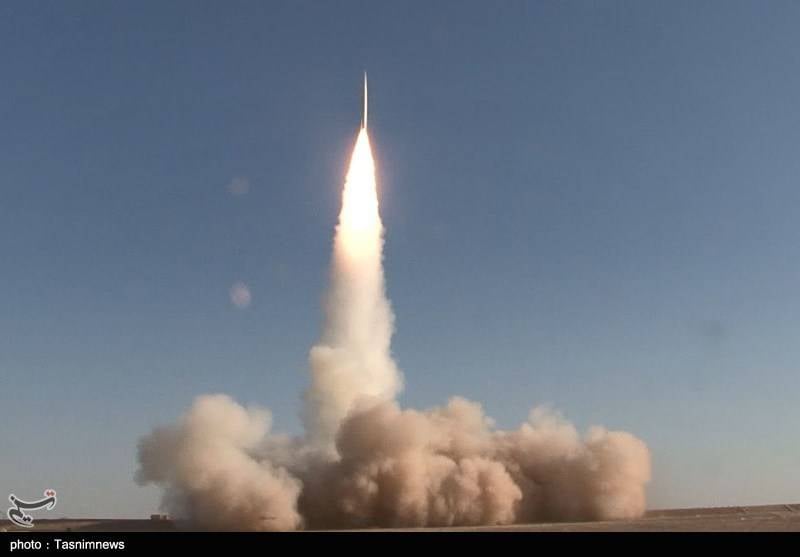 Launch of the Sayyad-4 rocket. Photo Tasnimnews.com
However, production continues, and the number of equipment in the troops must constantly grow, justifying and exceeding various forecasts. Apparently, in the coming years, the "Bavar-373" of its own production will become the most massive long-range air defense system in Iran's air defense facility. The army is showing interest in new purchases of imported equipment, but real contracts have not yet appeared. This contributes to the further development of domestic products and their new purchases.

In recent years, Iran has repeatedly demonstrated the potential of its defense industry in the context of anti-aircraft weapons. New samples of different classes have been created, put into service and mass-produced. In some classes, several developments take place - due to the difference in requirements, it is necessary to create different samples for the army and the IRGC.

The new air defense system "Bavar-373" was created using the accumulated experience and, possibly, with the assistance of third countries. Thanks to its increased characteristics, it becomes a strategically important element of the national air defense. At the same time, serial products are supplied to the troops, and in parallel, the development and modernization of the project is carried out.

So far, we are talking only about the processing of the launcher, but in the future, changes are possible in other components - radars, a command post or a guided missile. All this should lead to a new increase in characteristics, thanks to which the Iranian complex will become even better - and then the words about proximity to the S-400 will cease to be unfounded boast.

Ctrl Enter
Noticed oshЫbku Highlight text and press. Ctrl + Enter
We are
SAM Bavar-373 (Iran) - an analogue of the C-300?Air Defense of the Islamic Republic of Iran (part 2)
17 comments
Information
Dear reader, to leave comments on the publication, you must to register.