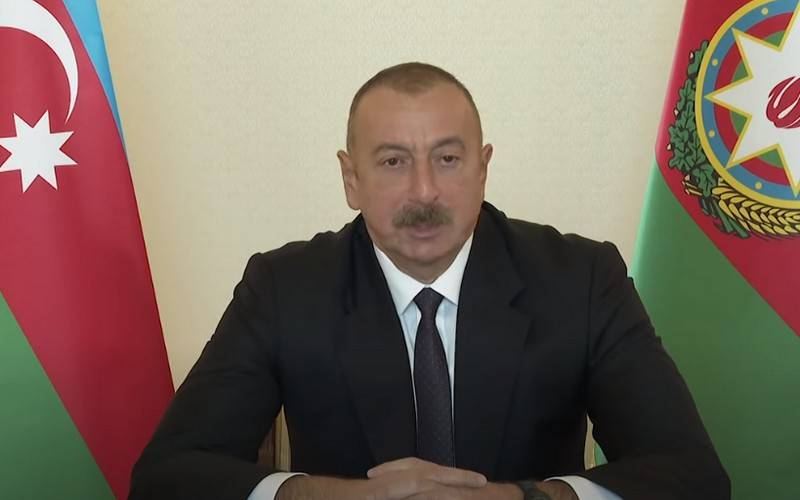 Azerbaijan is ready to stop hostilities in Nagorno-Karabakh and start negotiations in the event of a ceasefire from the Armenian side. Azerbaijani President Ilham Aliyev stated this in an interview with the French newspaper Figaro.

We are ready to end (the fighting) today. I already spoke about this during the talks in Moscow on October 10. It is only necessary that Armenia cease fire. And then it is the diplomats who have to act
- quotes the publication of the words of Aliyev.

The Azerbaijani leader stressed that Armenia should recognize the principles of the conflict settlement, determined by the OSCE Minsk Group, after which Baku will return to the negotiating table.

Aliyev spoke unflatteringly about Pashinyan, who, according to him, after coming to power "destroyed the peace process with his inflammatory statements and military provocations."

I think the time has come to achieve a political settlement (...) the status quo and the old line of contact no longer exist, a new reality has emerged
- he added.

Meanwhile, Armenian Foreign Minister Zohrab Mnatsakanyan held a number of meetings in Washington, which he called "very productive". The topic of conversations with US Secretary of State Mike Pompeo and US National Security Adviser Robert O'Brian was the settlement of the conflict in Nagorno-Karabakh. According to him, the United States is in favor of a peaceful solution to the issue.

In addition, Mnatsakyan announced the discussion of the issue of bringing peacekeepers into the conflict zone. According to him, Baku is not opposed to this initiative, and the OSCE Minsk Group (Russia, France and the United States) will come up with proposals on the composition, timing and number of observers and peacekeepers in Karabakh.
Ctrl Enter
Noticed a mistake Highlight text and press. Ctrl + Enter
We are
Reports from the militia of New Russia for 27-28 September 2014 of the yearNew war in the Caucasus be?
127 comments
Information
Dear reader, to leave comments on the publication, you must to register.