Blind from two halves. The French Navy has figured out how to save the burned out nuclear submarine 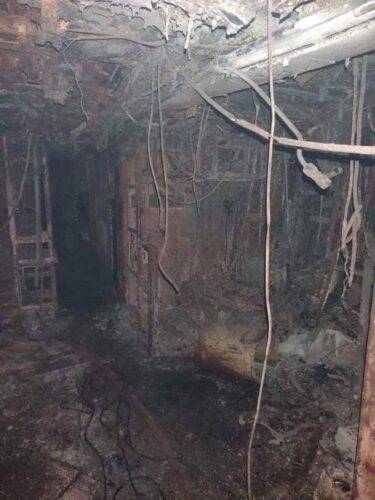 French Defense Minister Florence Parly confirmed on October 22 that the Perle nuclear submarine, which caught fire on June 12 during a major overhaul, will not be decommissioned, as predicted by all practically experts, but will be restored. The solution proposed by the Naval Group specialists, on the one hand, is original, and on the other, not very good. The bow of the ship burned out completely, this is clearly evidenced by photos and videos from the board. Probably, we are talking about the first and second compartments of the ship - the torpedo compartment and the central post compartment. There, there was no chance of recovery at all - 14 hours of fire was enough for both burnout and a fatal change in the properties of steel. For example, armored vehicles are written off even after a brief but high-temperature fire, during which the flame touched the armor for a certain time. And here - a boat, which has to "dive" hundreds of meters. Even if it is the smallest combat nuclear submarine in the world (less in displacement even of our Lear), and not the most successful, but still a nuclear submarine. 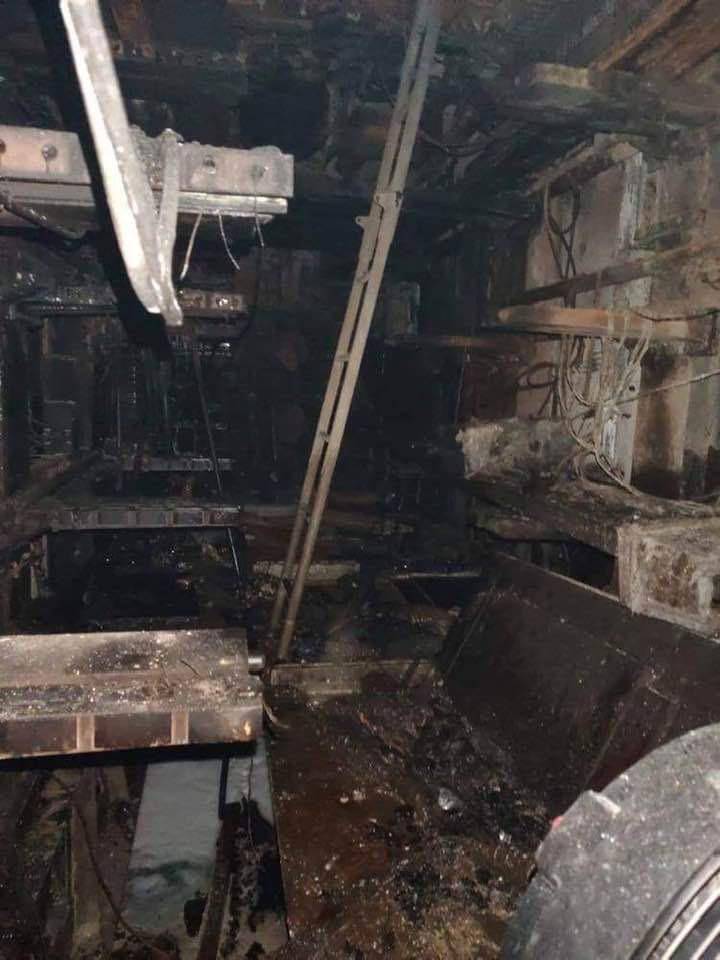 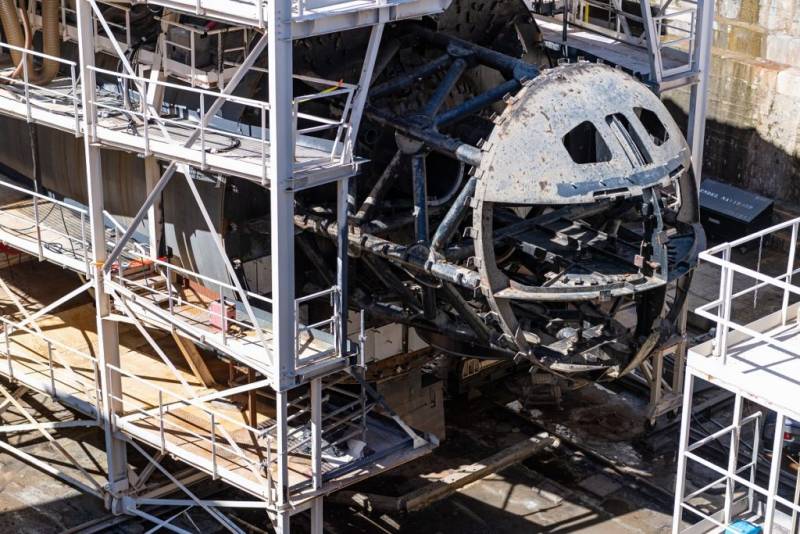 S606 Perle after fire
Obviously, the fire did not go into the third compartment (the reactor echelon) and beyond. And it was decided to keep this aft part of the boat. And the burnt nose will be cut off and disposed of. And in its place will be welded the nose of the first disabled nuclear submarine of the Rubis-Saphir type, which was disabled and written off a little over a year ago. After reconnecting the halves, all piping, cables and other connections will be restored. "After that, Perle will continue the major renovation that was interrupted by the fire," said Florence Parley. The operation of cutting off the burned-out half, cutting off the other half from the decommissioned boat and connecting it to the aft part of the "fire-place" will take about six months. And after that, the nuclear submarine will continue the overhaul, which will last until the end of 2023. Moreover, the equipment in the new old bow section will have to be replaced with the equipment that was removed from the "fire site" during the repair - thanks to this it survived. These are elements of torpedo armament, sonar complex, electronics, pumps and others.

Is there any reason?

Why is this done? But because the boat from which they will take the bow is the second nuclear submarine of this project, laid down in 1979 and entered service in 1984. That is, the ship has served 35 years, and, of course, all its equipment, despite repairs and replacement, already quite old. But Perle - the last built boat of the project (there were two more, but their construction was canceled), was laid in 1987, and put into operation in July 1993, everything there, of course, is newer and livelier. Although, on the other hand, the ancestor of the class, Rubis, is still formally in the ranks, despite the fact that it was laid down in 1976, and put into operation in 1983. True, the presence of this submarine in the ranks is formally, it was already going to be disarmed and disassembled in 2017. Then, in view of the constantly postponed entry into service of the lead nuclear submarine of the new Suffren project, it was postponed to 2018, then again and again, and now the decommissioning is scheduled for the end of this year. And it is possible that the date will be postponed again - after all, Suffren will not even formally enter service this year. 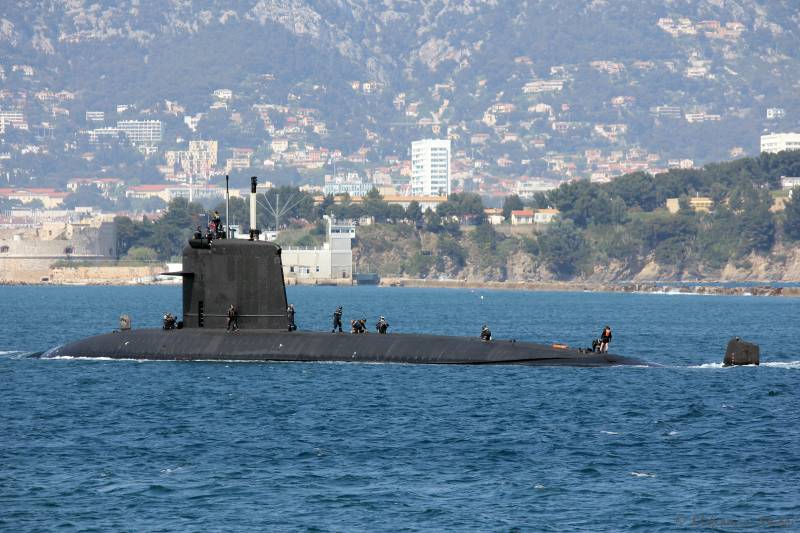 And this is how Perle looked in the ranks
The returned Perle is expected to serve until the end of the decade and be replaced by the last of its classmates on a Suffren-class nuclear submarine. The restoration procedure itself was chosen because, as reported, it is required to keep the numerical strength of the French submarine forces at a minimum level.

There is nothing new under the sun

The procedure itself, conceived with the "Pearl" (the whole series of these nuclear submarines is named after the stones: "Ruby", "Sapphire", "Emerald", "Amethyst", the exception is the "Casabianca" nuclear submarine), in general, not news in world shipbuilding. Lovers stories fleet can recall similar operations in the American Navy during the war, and our cruiser Molotov of Project 26bis, to which instead of the badly damaged one they welded the stern of a cruiser of another Project 68, and it served then for another quarter of a century. But a surface ship is one thing, and a submarine is another. And it's one thing to take the stern of a new unfinished ship, and another thing to take the bow of a boat that has served 35 years and was written off, taken, in fact, from a landfill (well, of course, it did not end up in a landfill). Yet, despite the replacement of equipment, the old ship is the old ship. Will it not turn out that the "Pearl" will be the same "dead soul" as the "Rubin" in recent years, when the boat was constantly stuck out either in repairs or at the pier? It may very well be.

But, apparently, the French admirals do not want to stay with 4 nuclear submarines instead of 5. And there are many reasons. Even after entering service, Suffren will be healed for the first years from the diseases of the lead ship. Ruby will be decommissioned. Cases with the reliability of the other three "rubies" are also not very good. Even when all 6 "rubies" were in service, usually there were actually 2, then 3 boats, then 4. And then you will grab even for such ambiguous options as the restoration of Perle. And then new nuclear submarines of the "Barracuda" (Suffren) type are being built terribly slowly and with constant time shifts. The ancestor of the class, for example, was founded back in 2007, and will enter service in 2021, the next one, "Duge-Truin", was laid in 2009, and it will most likely enter service in 2023, and so further, that is, the construction period turns out to be from 12 to 14 years, for a small, 5300 tons, nuclear submarine, to put it mildly, without technological miracles and breakthroughs. And the deadlines can "float" further, and the combat readiness of the "rubies" - to fall even more.

There is one more point: the fewer boats remain in the ranks, the narrower the possibilities of a bureaucratic nature. A division of 5-6 submarines is one thing, and 3-4 is another. They can also change the status of the submarine squadron, and change the commander's staff category. And so, formally, there will be 5 boats, and how many of them are actually in service is the tenth thing. And again, a similar approach is characteristic, probably, of many fleets, not excluding ours. At one time, the B-380 submarine of project 641B was formally retained in the ranks of the Red Banner Black Sea Fleet (KCHF). Which, back in 1991, was put up against the wall for overhaul, which eventually began only in 2000. And which did not go wobbly or roll (at times really did) until the beginning of this decade. So far, they have not given up spending money on a morally and technically outdated submarine.

And then there was a return of Crimea home, the newest submarines of pr. 06363 began to massively enter into operation of the KChF, the only combat-ready submarine of the KChF "Alrosa" B-871 went into repairs, but they forgot about the B-380. Although they made plans to dispose of it, they were no less zealous than before to turn it into a training ship. But the boat continued to occupy the ancient floating dock PD-16, together with which it sank at the end of last year, then surfaced and finally got to disposal. As they say, the whole saga with the B-380 was not only for the sake of writing off money for work on it, but for the sake of something else: being in repair of the second submarine made it possible to keep a division of submarines with the corresponding positions in the KChF.

There is one more thing - financial. The work on cutting the "halves" from the decommissioned and burned out boats and on their reunification will not be cheap. According to French media reports, the renovation costs are estimated at around 120 million euros, or $ 140 million. According to Le Monde, the French Ministry of Defense will pay 70 million euros, and 50 million euros will be covered by insurance payments. The amount is substantial, and it can increase even more, and there is still an amount for the overhaul itself. Writing off with disposal certainly does not cost that kind of money, which means that the Naval Group had a reason to persuade the French Ministry of Defense for such an operation, even if experts consider this operation pointless.

Time, however, will tell what will come of it.

Ctrl Enter
Noticed oshЫbku Highlight text and press. Ctrl + Enter
We are
Results of the week. “In our cooperative, the board is always agreed”Strangulation: the context, conduct and consequences of the American naval blockade of China
48 comments
Information
Dear reader, to leave comments on the publication, you must to register.