What if it's a mistake? Not damned or forgotten 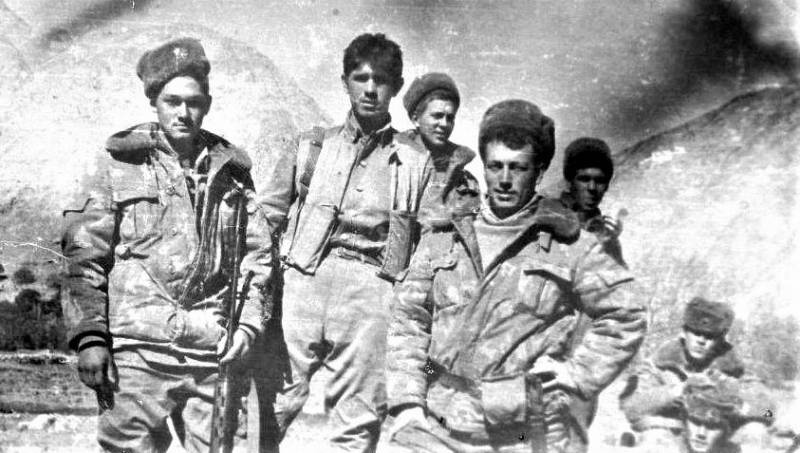 Three quarters of a century have passed since the war. We sometimes forget about many of those who fought with the enemy. We don't remember the heroes of the Soviet Union, but those who were awarded other awards somehow merge in our memory. With the memory of very recent wars, things, alas, are not much better.

In the 1980s, border guards in Afghanistan performed a particularly important task. Once a terrible tragedy happened there. All border warriors know about it.

On November 22, 1985, 23 fighters with officers Vladimir Roslov and Anatoly Naumov, according to the order received, went on a mission after lunch. 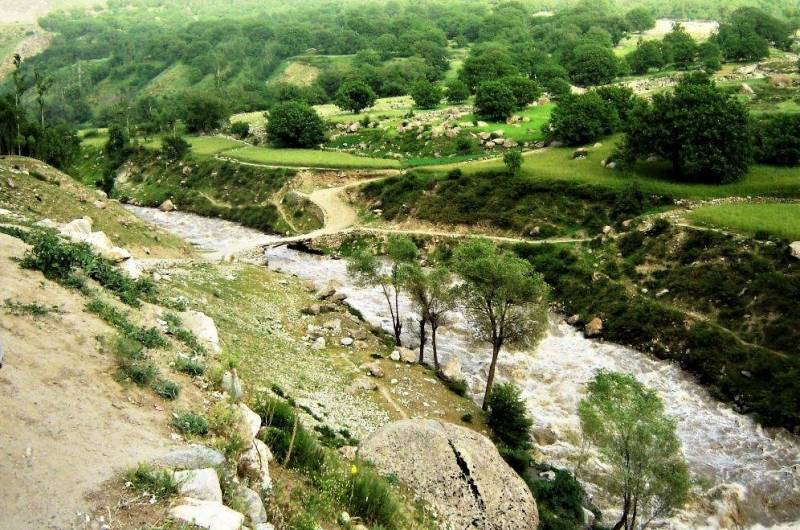 It happened right here, near Afrij village
It was already getting dark in the mountains when they approached the Afrij village. Here the battle with the dushmans took place. Perhaps there was a mistake in something that no one wants to admit, and here is its price: nineteen dead, two seriously wounded, and only four managed to return to the location of the outpost surviving.

They will all go together in the night after the bleeding junior sergeant Vladimir Gavrilyuk. The killed soldiers lay on the mountain terraces for two nights and one day. 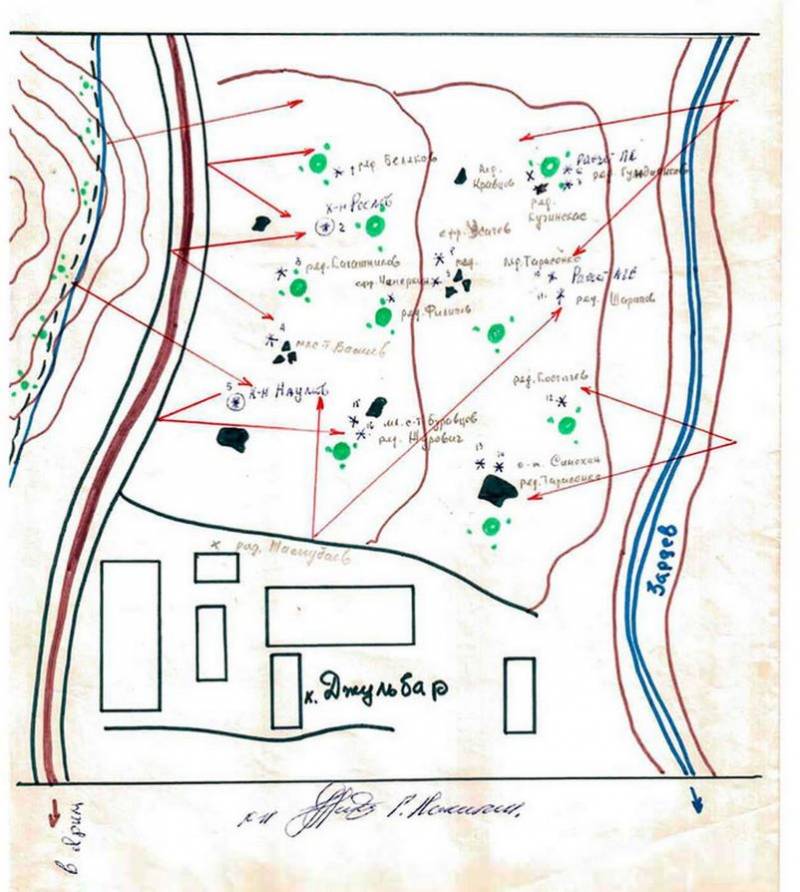 But those four who survived, privates Oleg Vasilyuk, Vitaly Lazarev, Sergei Borozdin and Sergei Korsakov, were also in battle and survived. They were not awarded! Why? Then no one really understood this, and it was not allowed to write about the tragedy. The first material about the battle was published only in 2001 in the newspaper Literaturnaya Rossiya.

Thus, the true truth was revealed to the relatives of the victims, and even then not all. And in November 1985, they often found out about the death of their relatives only on the day when a zinc coffin with the body of their son was brought into their house. Later, awards were also handed out in silence, without special words and honors: put a box with the order in your hands, and go!

In 2016, an initiative group of veterans-border guards made a decision to create an international project "We Remember 22.11.85/22.11.85/XNUMX". A website www.XNUMX.milportal.ru was created with the sponsorship of one of the veterans of the Red Banner Eastern Border District.

Soon, letters were prepared and sent to the presidents of the states of Russia, Kazakhstan, Belarus, Ukraine, Lithuania, as well as regional governors, heads of administrations of cities, towns and villages where border guards are buried. With the only request - to hold a watch of memory at the grave of heroes. There were responses, letters, materials were sent, which became the basis of the exposition of the project.

Common grief has no boundaries

It quickly became clear that only in Kazakhstan, in the cities of Kyzyl-Orda and Nur-Sultan, there are highways named in honor of the fallen heroes of privates Batyrzhan Shalgumbayev and Alexander Kravtsov. In Russia, only in the city of Bakal, the Satkinsky District of the Chelyabinsk Region, there is a street named in honor of the deceased participant in the battle of the hero-order bearer Private Andrey Kostylev; there are 28 houses on it.

More recently it became known that in the city of Stavropol they are preparing to perpetuate the feat of junior sergeant Pavel Buravtsev and name one of the streets of the southern city in his honor. And what about the rest? Only commemorative plaques at the schools where the heroes-border guards studied. 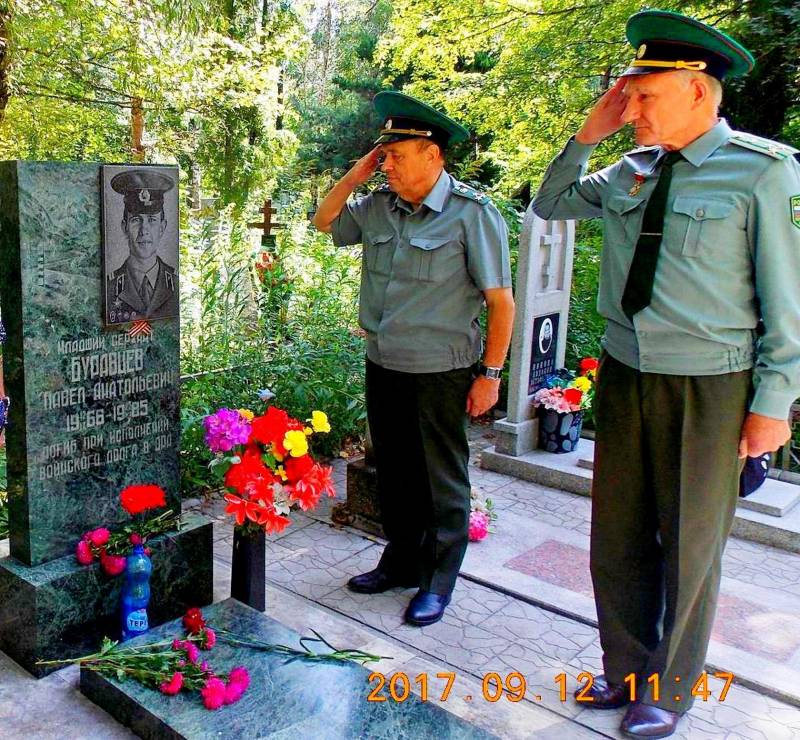 In November 2020, their feat turns 35. Of course, a lot in our minds this year has changed the pandemic, but one wonders, how is it that over all these thirty-odd years, an exposition about the worst tragedy in the entire Afghan campaign has not appeared in the Central Museum of Border Troops of the FSB of Russia?

In the spring of this year, the third volume of the publication "Border Guards in the Fire of Afghanistan" was published, but for some reason without an outline of that fierce battle in the Zardev Valley. Only the museum employee Olga Skorynina scrupulously collects information for publications about each of the heroes of this battle, and one of the eyewitnesses to what happened then in the mountains of Afghanistan, border guard Oleg Orlov, travels to his blood graveyards with the burials of heroes and captures everything that he sees.

Meanwhile, by a miracle the surviving hero-order bearer Vyacheslav Deriglazov has already lost his home in the Kursk region and now lives in an apartment allocated to him for a while.

For comparison, it is worth remembering the feat of the sixth company of the Pskov paratroopers. There also was a command error. 84 soldiers were killed. But the whole country knows about their feat. We are proud of the courage and courage of the fallen and we all mourn together in memory of them.

Border guards also know about 19 dead, but mostly those who served at the border, it is they who annually hold commemorative events on the date of their death. So this year, funeral candles will be lit at the officers 'and soldiers' graves in cities, towns and villages in memory of the Panfilov border guards who died in the battle near the Afghan village of Afridzh.

On a large scale, the mention of their feat is not promoted, but it would be more correct to say, it is simply hushed up. And this is an unforgivable mistake of all of us now living!

And then another example comes to mind. In September 1994, a group of documentary filmmakers, headed by the young Sergei Govorukhin, worked in Tajikistan in the area of ​​responsibility of the Moscow border detachment in the area of ​​the Turg height. With the permission of the command, all members of the group received weapon and ammunition.

In those days, the daily reports from the Group of Russian Border Guards of the Federal Border Guard Service of the Russian Federation were alarming in a military manner. Sergei was looking for a suitable nature for his future, as it turned out later, for the stunning documentary "Cursed and Forgotten." The group moved from one point to another almost every day, but everything was not right. 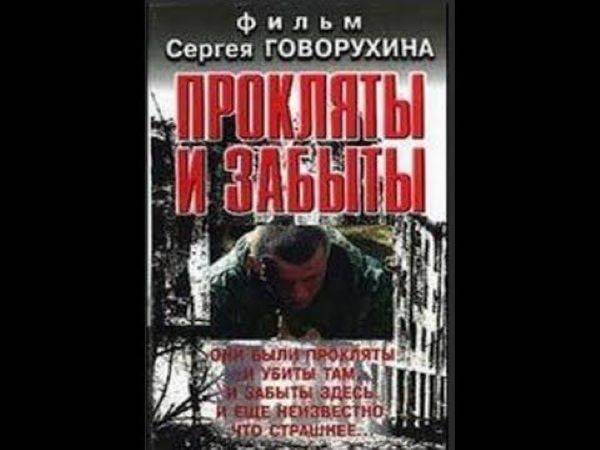 On September 16, the "turntable" dropped the filmmakers on Turga and they walked down the path after Major Andrey Nartov's group. We went down for a long time, for several hours, and when we reached the cover group of Captain Vasily Koshik, an explosion suddenly sounded down in the gorge.

Then Sergei, along with members of the film crew Mikhail Simakov and Vitaly Vanchev, had to put aside the cinema equipment and take up arms. Help came to the border guards only the next day: the wounded were taken to the helipad on Turga for 32 hours, and the dead were brought to the detachment only a week later. 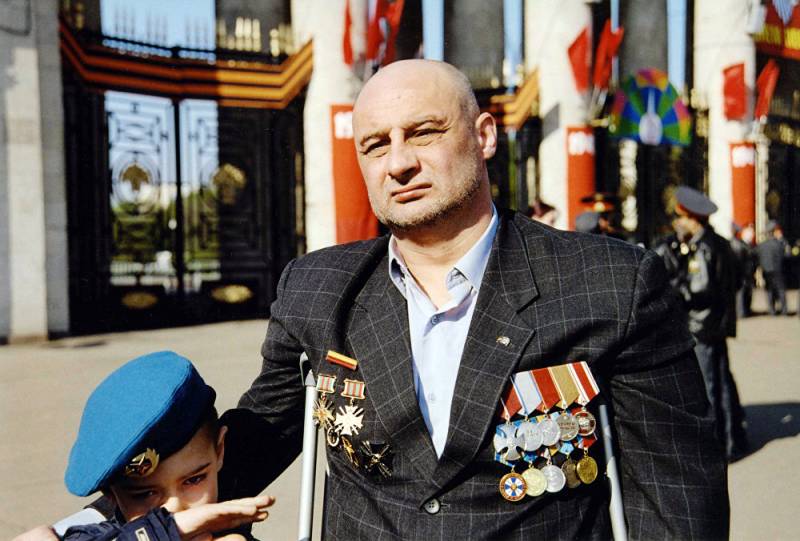 Sergey Govorukhin knows what a "blue beret" is
Upon the return of the film crew to Moscow, the head of the press center of the Federal Border Guard Service of the Russian Federation, Colonel Alexander Suvorov, found it necessary to report in a memo to the Director of the Federal Border Service of Russia, General of the Army Andrei Nikolaev, about the courage and courage of the members of the film crew.

Then, in September, the idea of ​​being awarded the Order of Courage went to them. But, given the fact that Russian President Boris Yeltsin was deeply offended by Sergei's father, Stanislav Govorukhin, the Federal Border Service's proposal to award documentary filmmakers was rejected.

In February 1995, Sergei, with the same film crew, came under fire on Minutka Square in Grozny. He was wounded, which subsequently led to the amputation of one of the legs below the knee. Govorukhin bravely endured this and continued working on the film.

At the same time, the newspaper "Komsomolskaya Pravda" published an article about what happened in September with documentary filmmakers near Turg and what was the Kremlin's reaction to the presentation of them for awards.

Colonel Alexander Suvorov again presented to the director of the FPS materials for awarding orders to all members of Sergei Govorukhin's group. Andrei Nikolaev immediately re-signed the submission, and on the eve of Victory Day, all three were awarded the Orders of Courage. This is how the mistake of the Kremlin structures was corrected.

“The only real mistake is not to correct your past mistakes,” the wise Confucius once said. Maybe it is worth listening to this and returning to the same eighties in this anniversary year, understanding in detail the exploits of the border guards and rewarding them what they deserve?

They are all heroes, and that says it all. We just have to show true faith in this and wisdom! And we also need to talk about them not only on anniversaries, but also on a daily basis. Memory demands it!

Killed on November 22, 1985 in a battle near Afrij village (Republic of Afghanistan):

1. Private Igor Abrosimov - Russian, posthumously awarded the Order of the Red Banner. He was buried at the cemetery of the village of Kochaki, Shchyokinsky district, Tula region. 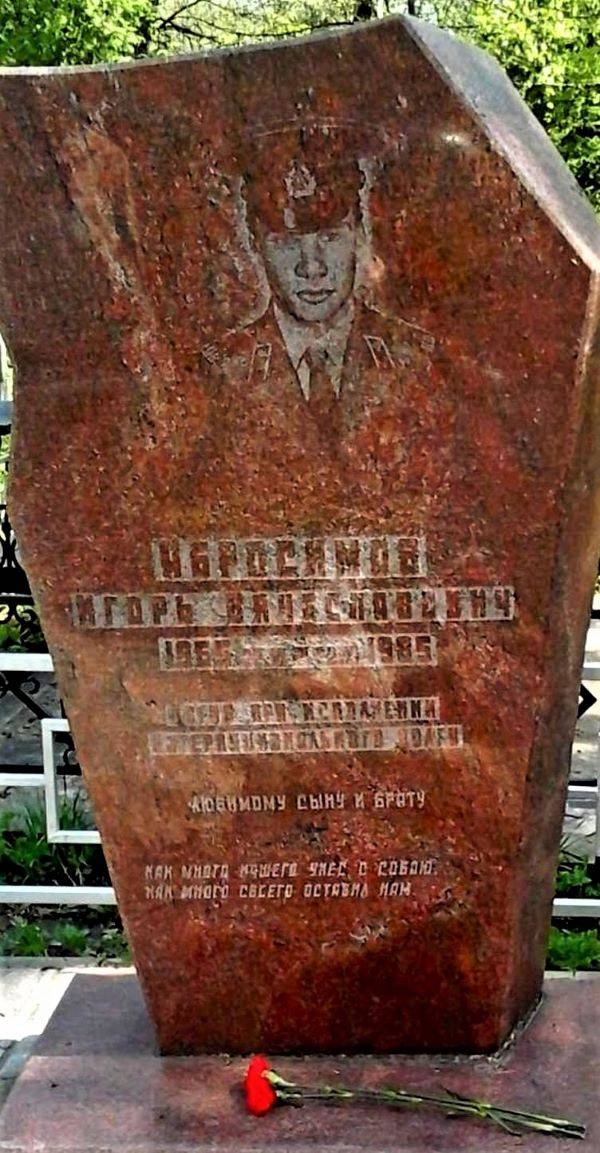 2. Private Sergei Belyakov - Russian, posthumously awarded the Order of the Red Star. Buried at the Northern Cemetery in Perm. 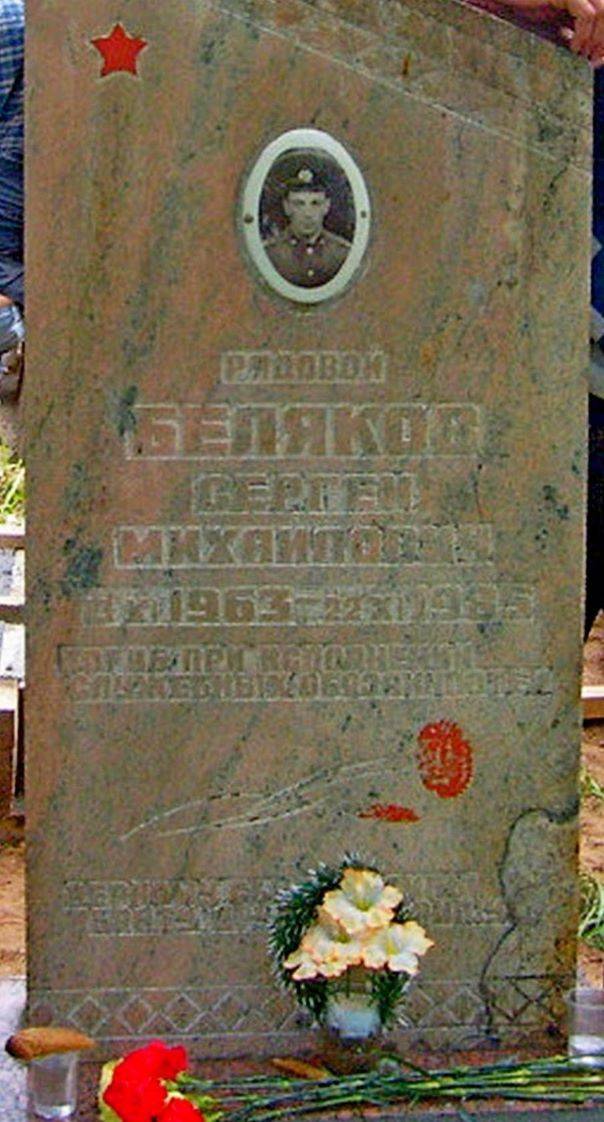 4. Junior Sergeant Albert Valiev - Tatar, posthumously awarded the Order of the Red Star. He was buried in the village of Yamashevo, Mamadyshsky district, Republic of Tatarstan. 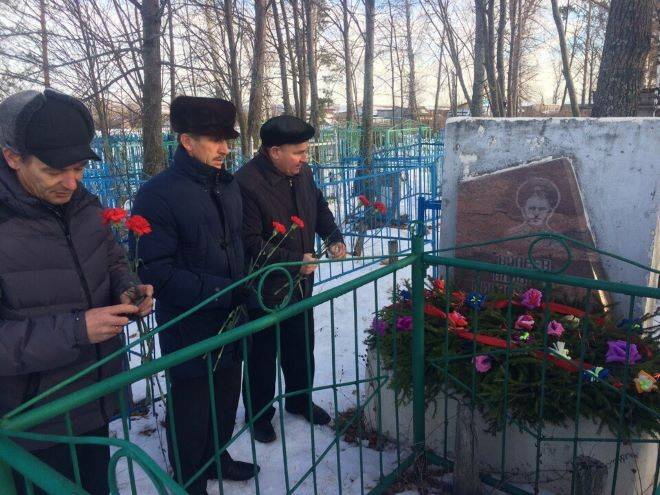 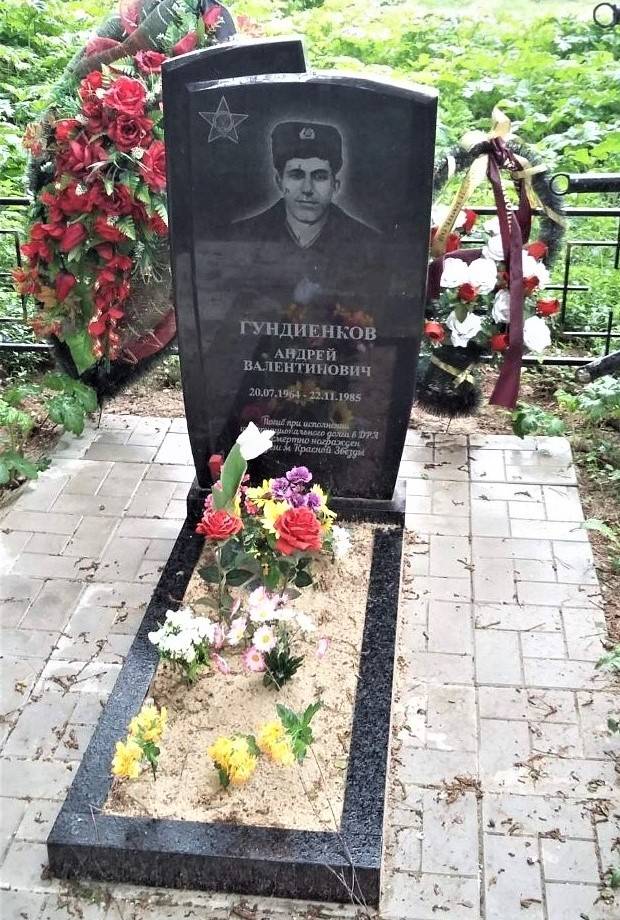 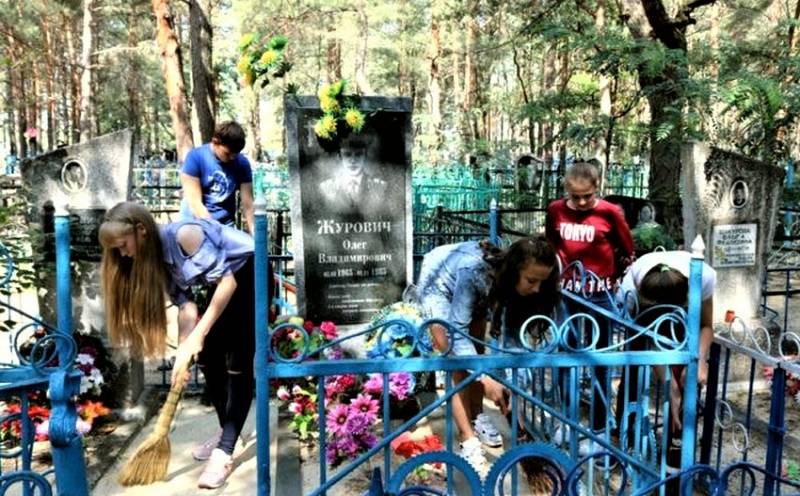 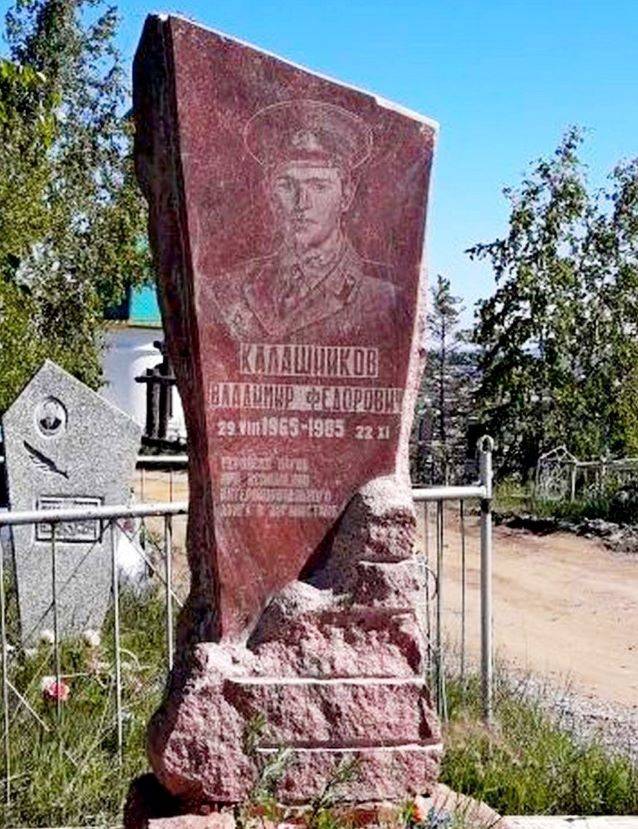 8. Private Andrey Kostylev - Russian, posthumously awarded the Order of the Red Star. Buried in the town of Bakal, Chelyabinsk region. 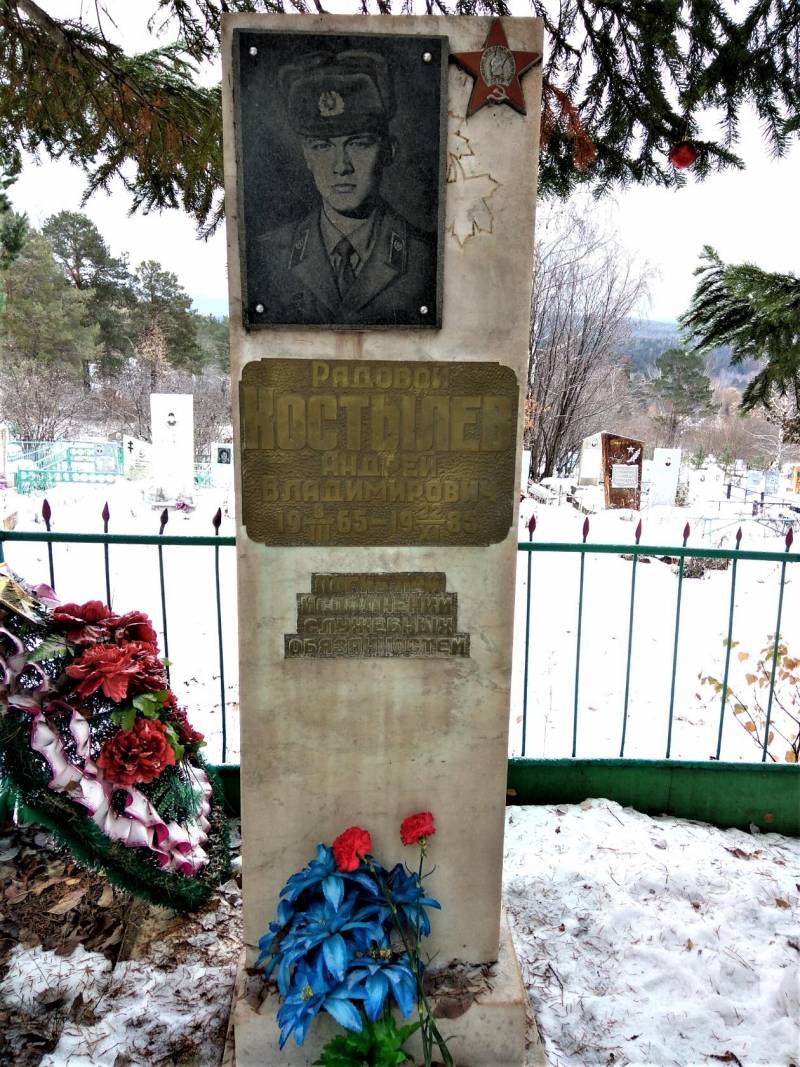 9. Private Alexander Kravtsov - Russian, posthumously awarded the Order of the Red Star. Buried in the city of Tselinograd (now Nur-Sultan), Republic of Kazakhstan. 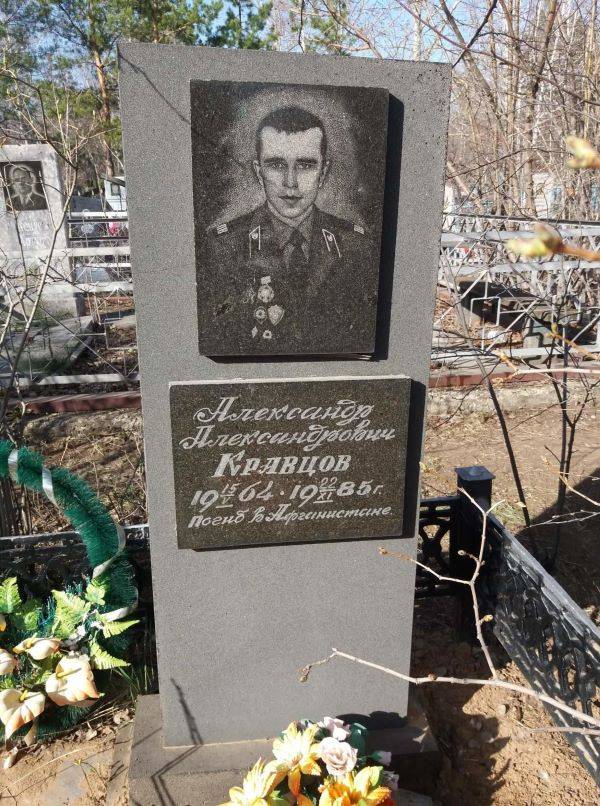 10. Private Virgilijus Kuchinskis - Lithuanian, posthumously awarded the Order of the Red Star. He was buried in the village of Vekshnialiai, Telšiai region, Lithuania. 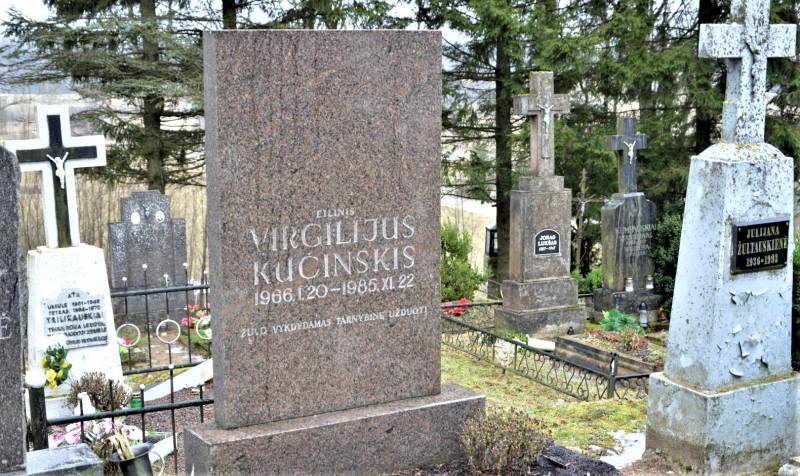 11. Captain Anatoly Naumov - Russian, posthumously awarded the Order of the Red Star. He was buried in Kiev at the Berkovtsy cemetery, Ukraine. 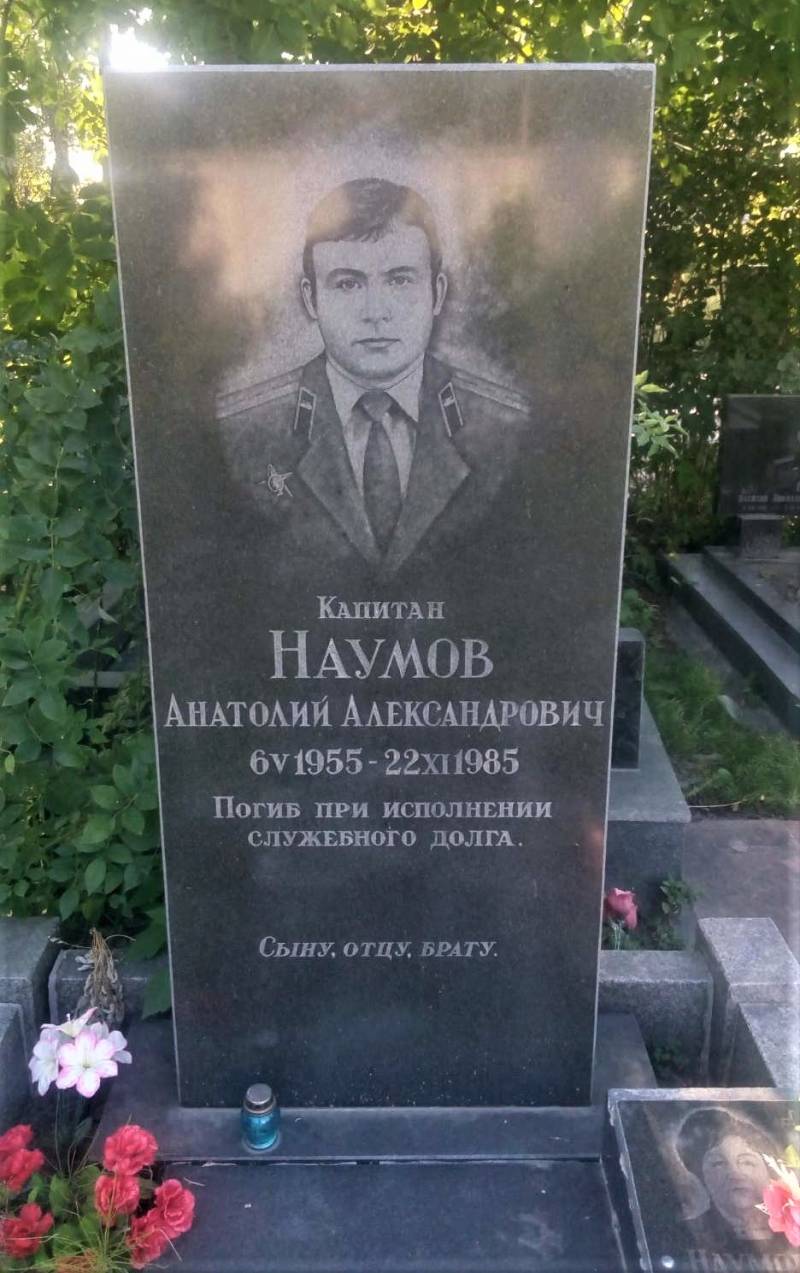 12. Captain Vladimir Roslov - Russian, posthumously awarded the Order of the Red Star. Buried in the city of Frunze (now Bishkek) at the Chon-Aryk cemetery, the Republic of Kyrgyzstan. 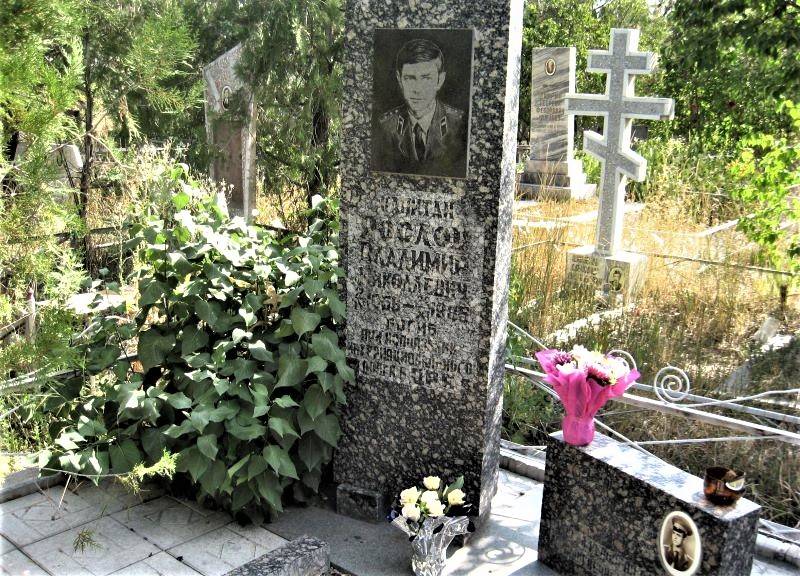 13. Sergeant Vladimir Semiokhin - Russian, posthumously awarded the Order of the Red Star. He was buried in the village of Pigarevo, Komarichsky district, Bryansk region. 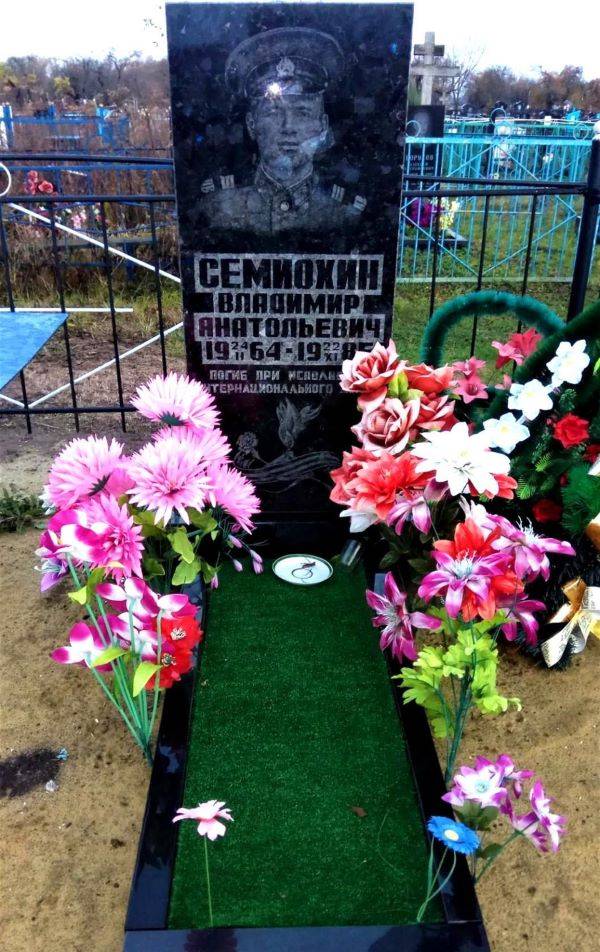 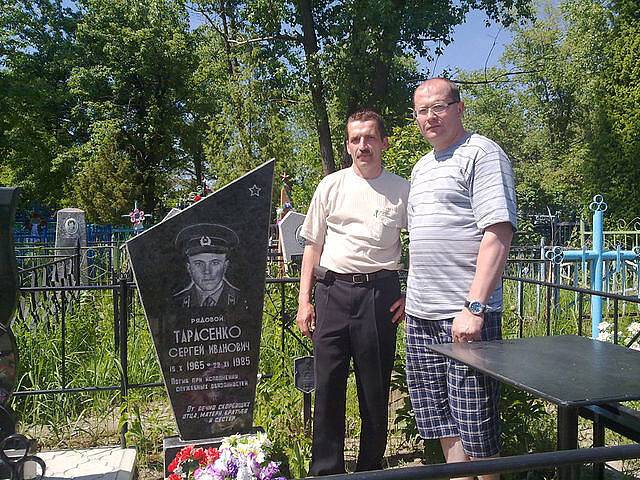 15. Corporal Yevgeny Usachev - Russian, posthumously awarded the Order of the Red Star. He was buried in the cemetery of the village of Gorelki in the city of Tula. 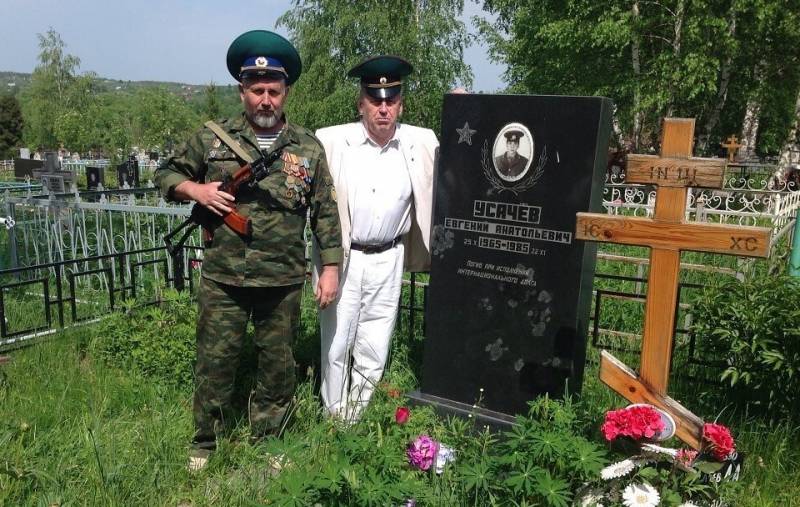 16. Private Nikolai Filippov - Russian, posthumously awarded the Order of the Red Star. He was buried in the village of Lomintsevo, Shchyokinsky district, Tula region. 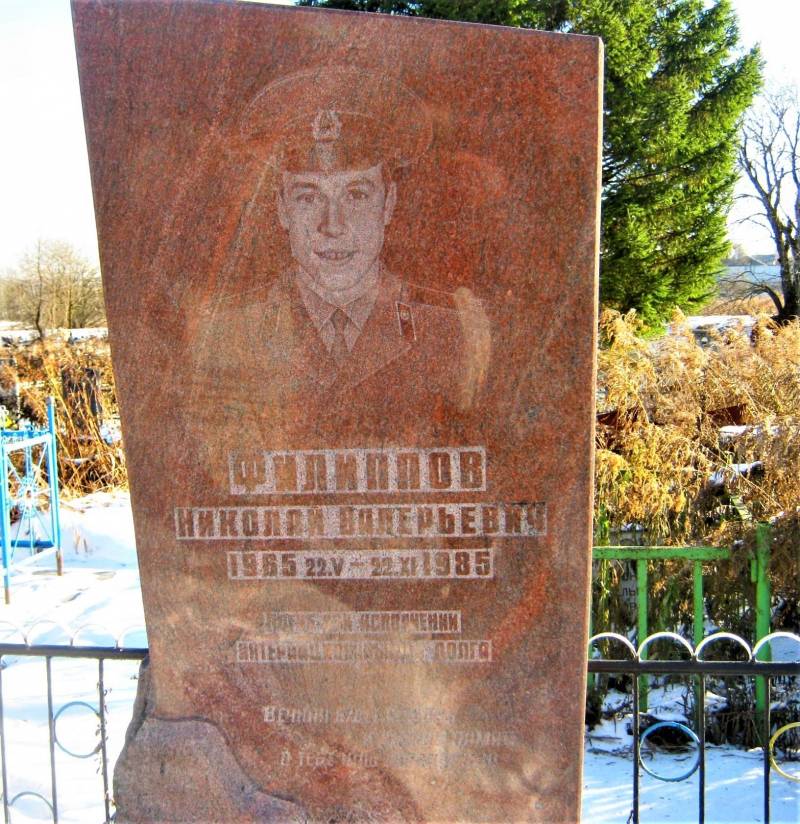 17. Corporal Gennady Chemerkin - Russian, posthumously awarded the Order of the Red Star. Buried in the city of Bogoroditsk, Tula region. 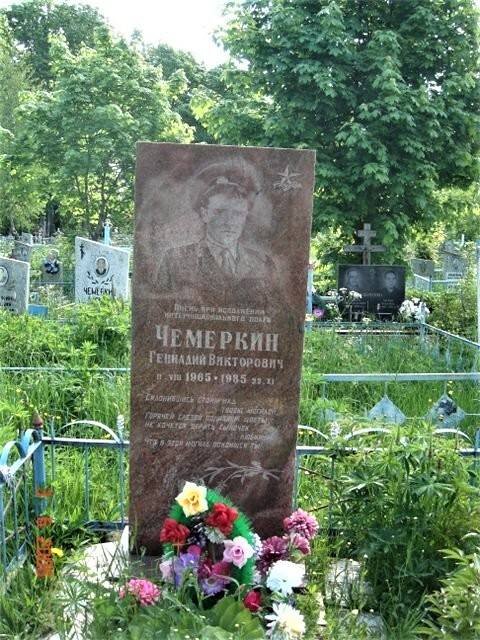 18. Private Batyrzhan Shalgumbayev - Kazakh, posthumously awarded the Order of the Red Star. Buried in the city of Kyzyl-Orda, Republic of Kazakhstan.

19. Sergeant Rafkat Sharypov is a Tatar, posthumously awarded the Order of the Red Star. Buried in the city of Orsk. 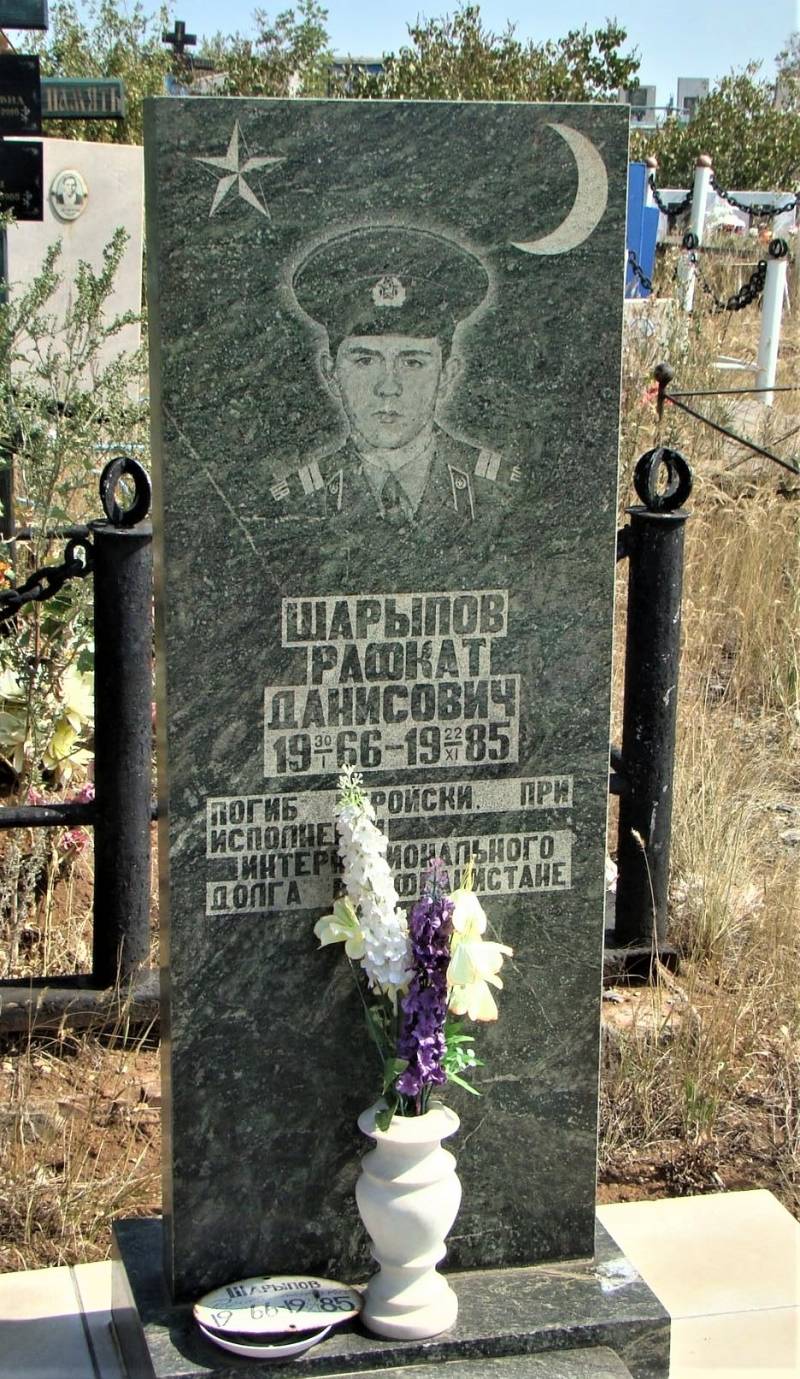 Ctrl Enter
Noticed oshЫbku Highlight text and press. Ctrl + Enter
We are
A great interview with Sergey Lavrov: about Ukraine, Obama and IranWhat you didn't want to know about England
49 comments
Information
Dear reader, to leave comments on the publication, you must to register.