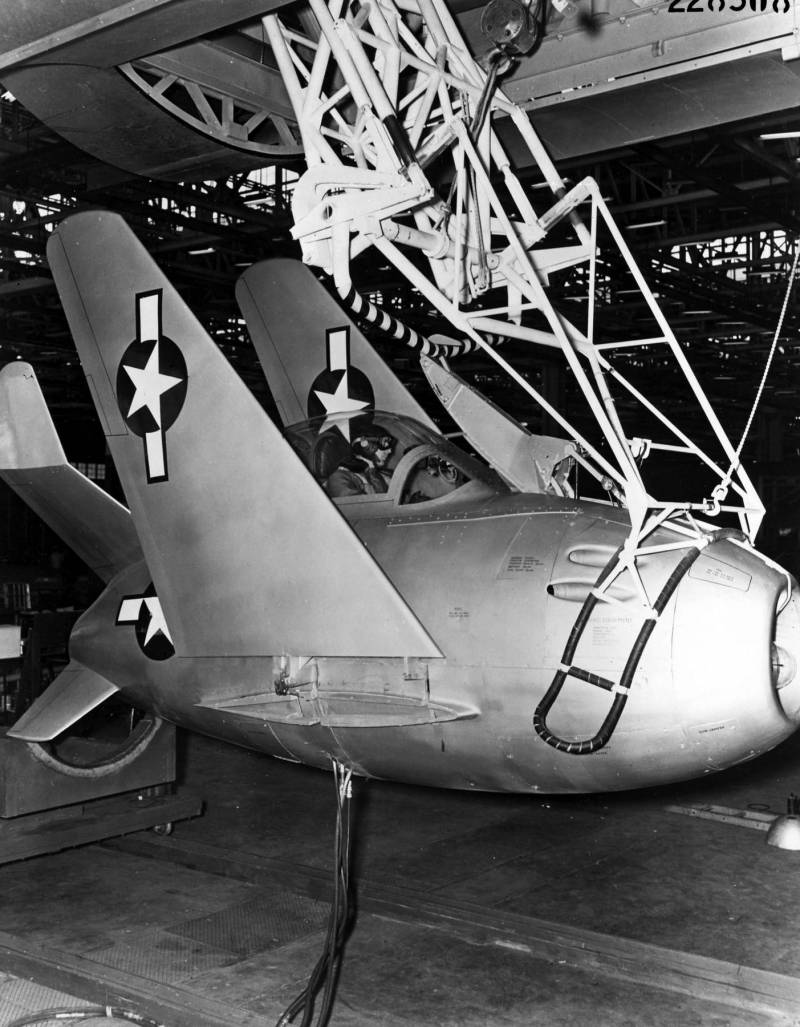 In the late forties, the United States began work on the topic of "flying aircraft carriers" - large aircraft capable of carrying and launching light equipment. In the following decades, several projects of this kind were created, some of which even reached tests. However, none of these complexes made it past the tests. Let's try to figure out what prevented the US Air Force from getting a "flying aircraft carrier" with a "parasitic fighter".

During World War II, the United States actively used long-range Aviation... It quickly became clear that the bombers needed cover, and the existing fighters could not accompany them throughout the flight. The idea of ​​a "parasitic fighter" soon emerged: a light aircraft carried by a bomber and dropped when needed.

In the early years this concept did not receive real development. Design began only after the war at McDonnell, and by the end of 1947 they had built a pair of experimental XF-85 Goblin light fighters. Also carried out re-equipment of the carrier aircraft EB-29B. According to the project, the "Goblin" was suspended under the bomb bay of the carrier with the help of a special lowering trapezoid, which provided the detachment of the "parasite" from the bomber and its reception back. 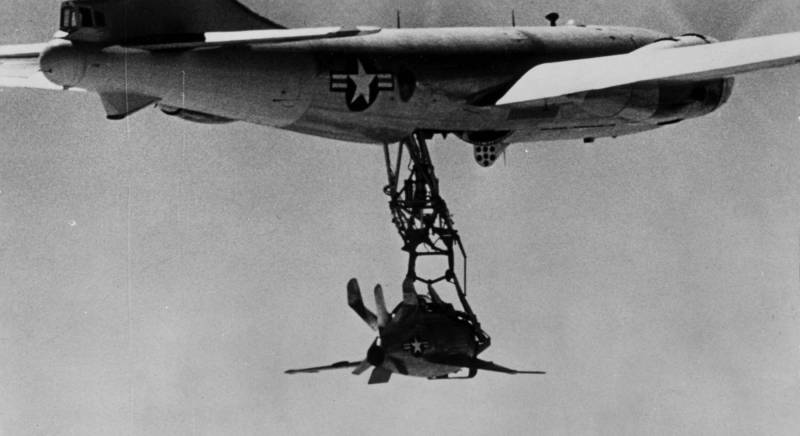 EB-29B with trapezoid extended; XF-85 is suspended. Photo USAF
On August 23, 1948, the XF-85 fighter uncoupled from the carrier for the first time and made an independent flight. An attempt to return to EB-29B ended in an accident, and the test pilot had to land at the airfield. In the future, several new flights took place, which showed the complexity of using a parasitic fighter. In October 1949, the customer closed the project due to lack of progress and the presence of a lot of problems.

The main reason for the failure of the XF-85 project was the difficulty of piloting the fighter near the carrier. The large bomber created powerful turbulences that impeded approach and docking. Various solutions have been proposed, but they have not led to a dramatic improvement in the situation. In addition, the Goblin aircraft was not distinguished by high tactical and technical characteristics. With a maximum mass of 2,5 tons, it carried only four large-caliber machine guns and had fuel for 80 minutes of flight. At the same time, the actual duration of the flight was limited by the need to return to the carrier and the lengthy docking procedure.

Tests of the XF-85 showed that the task of escorting bombers must be performed by "full-size" fighters. To test this idea in 1949 launched the program MX-1016 or Tip-Tow ("Towing at the tip"). Its goal was to create and test the means of docking a carrier in the form of an ETB-29A and a pair of EF-84D fighters. 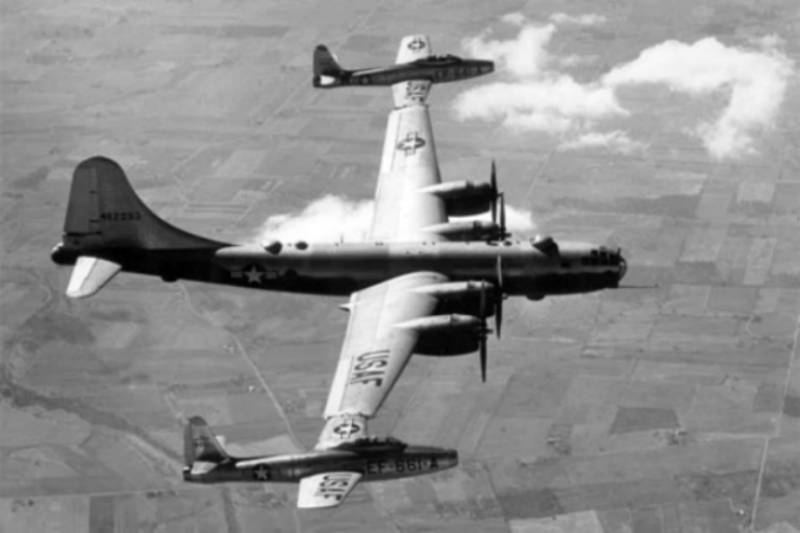 Tip-Tow complex in flight. Photo USAF
Special locks were installed on the wing tips of the carrier; similar devices appeared on fighters. It was assumed that the ETB-29A would take off on its own and then take on the wing of fighters. Further flight was carried out only at the expense of the carrier engines, and the crews of all three aircraft participated in the maneuvering. In a given area, the fighters had to start their engines and begin an independent flight. Then the hitch was made to return to the base.

Flights of the Tip-Tow complex began in the summer of 1950. On September 15, the first docking was carried out in the air. Flights were conducted with imitation of different situations. In parallel, the development of automatic control systems was carried out, which made it possible to reduce the load on fighter pilots.

Automation tests began only in March 1953 and immediately showed the need for fine-tuning. On April 24 of the same year, in the next flight, the EF-84D docked to the left plane of the bomber and turned on the automatic control. Immediately after this, the fighter made a sharp maneuver and hit the bomber's wing. Both planes and five pilots crashed. 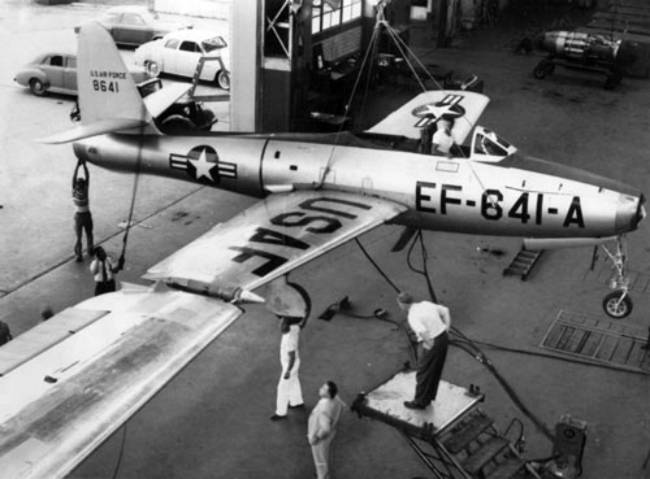 Carrier wing and fighter plane close-up. Photo USAF
After this accident, the Tip-Tow project was closed. The formal reason was the difficulty in creating a fully functional system. However, the idea of ​​towing at the wingtip was not abandoned - by this time there was a similar project based on more modern samples.

Rethinking the experience of the XF-85 project led to the emergence of the FICON (Fighter Conveyor) program, launched in 1951. In this case, the long-range bomber B-36 Peacemaker in the GRB-36F modification was supposed to be the carrier aircraft, and the modified F was considered as a parasitic fighter -84E. The carrier received a lifting unit, and the fighter received a towing hook and other devices.

FICON tests began in January 1952. On May 14, the first flight took place under the full program, which included the takeoff of the entire complex, the reset and independent flight of the fighter, as well as the subsequent return to the carrier. In May 1953, flights began using the modified F-84F fighter with higher performance. In general, the FICON complex performed well, although there were complaints. 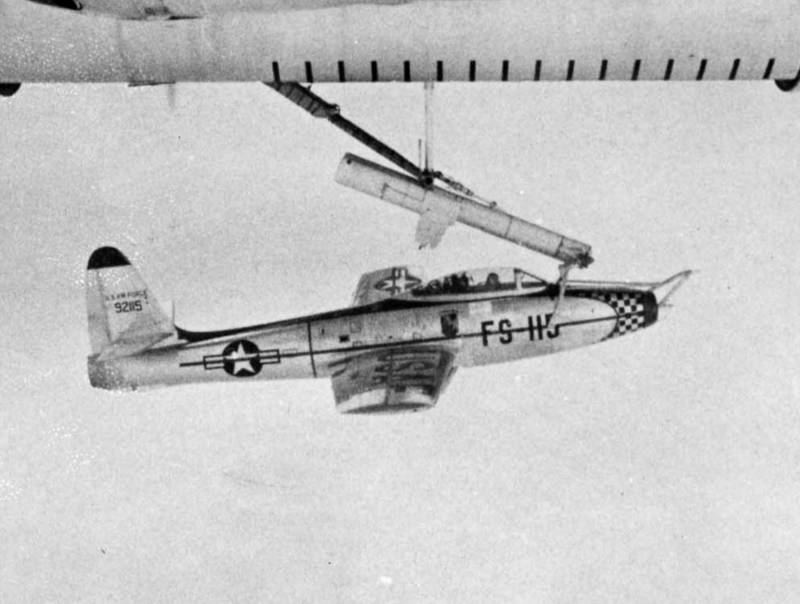 FICON system tests. Photo USAF
Based on the test results, the US Air Force decided to adopt a new complex, but not for the protection of bombers, but for reconnaissance. To this end, we ordered the conversion of 10 RB-36В reconnaissance aircraft into a flying aircraft carrier and the release of 25 RF-84K reconnaissance aircraft. The finished equipment entered the troops in 1955-56, but did not reach active use. The last FICON flight took place in April 1956, after which the complex was decommissioned, and the aircraft were rebuilt according to standard designs.

The reasons for abandoning FICON were simple. The complex turned out to be too difficult to operate in a combat unit. Detachment and return of the "parasite" to the carrier, despite all the innovations, remained very difficult. In addition, by the time FICON entered the troops, a successful replacement appeared in the form of the U-2 aircraft.

In parallel with FICON, the Tom-Tom project was developed. It provided for the towing of two fighters on the wingtips of the B-36. By 1956, an improved attachment and automatic control system had been created, which was even tested in flight. However, the project was declared obsolete and was quickly closed.

They returned to the idea of ​​a flying aircraft carrier in the sixties, when new technologies appeared that made it possible to obtain a sharp increase in the main characteristics. Lockheed at the level of theory worked out the CL-1201 project - it proposed a super-heavy aircraft carrier with a nuclear power plant.

The optimal configuration was considered a "flying wing" with a span of 340 m and a length of 170 m. The take-off weight was supposed to reach 5400 tons. It was proposed to use a nuclear reactor with a capacity of 1850 MW, producing energy for several turbojet engines. The possibility of using additional take-off engines was also considered. CL-1201 could stay in the air for 30-40 days and show a "global" flight range.

The CL-1201 platform could be used for different purposes, incl. as a flying aircraft carrier. Up to 20-22 fighters could be placed on pylons under the wing with the ability to start and return. A full-fledged hangar was placed inside the flying wing for servicing aircraft.

CL-1201 as seen by artist Lockheed
The CL-1201 project did not advance beyond theoretical study. The reasons for this are obvious. With all the optimism of that time, such a project was too daring and complicated, and also had a lot of problems, the solution of which turned out to be too difficult or impossible. As a result, the project went to the archive, and the idea of ​​a nuclear aircraft carrier in the air was no longer returned.

In the early seventies, a new project started, this time again on the basis of the existing platform. At first, the Lockheed C-5 military transport aircraft was offered as an aircraft carrier, and then this role was given to the Boeing 747 airliner in the AAC (Airborne Aircraft Carrier) modification.

The 747 AAC project was developed by Boeing. It provided for a major re-equipment of the base aircraft, as well as the development of a new "parasitic fighter". The Boeing 747 AAC was supposed to have two decks: the upper one was intended for storing fighters, and the lower one was used for launching, receiving and refueling in flight. The optimal layout provided the transportation of 10 fighters. 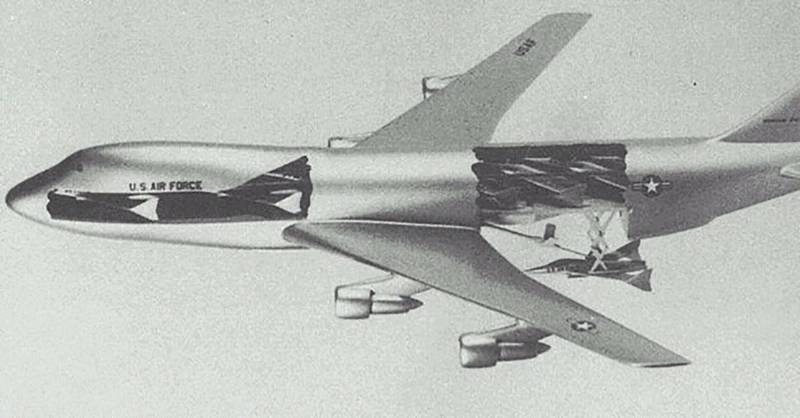 Boeing 747 AAC in position for fighter launch. Boeing graphics
After a lengthy search, Boeing developed a preliminary design for the Model 985-121 Microfighter. It was a compact aircraft with a delta wing, able to fit into the limited space of the cargo compartment. At the same time, he could carry a developed complex of electronics and missile weapons. The main method of application was flights from a carrier, which is why an inflatable ballonet was used instead of a wheeled chassis. The 985-121 project was based on the technologies of its time, and its implementation did not require special measures.

The Boeing 747 AAC project was abandoned in the mid-seventies. This decision was caused by the overall complexity of such a complex, the already known problems of flying aircraft carriers, as well as doubts about the Model 985-121's ability to effectively deal with modern and promising aircraft of a potential enemy.

Since November last year, under the control of the DARPA agency, test flights of a new aviation complex based on the C-130 carrier aircraft and the X-61 Gremlins unmanned aerial vehicle from Dynetics have been carried out. The UAV of the new type is distinguished by a high degree of automation and is capable of carrying a variety of payloads for performing various tasks. 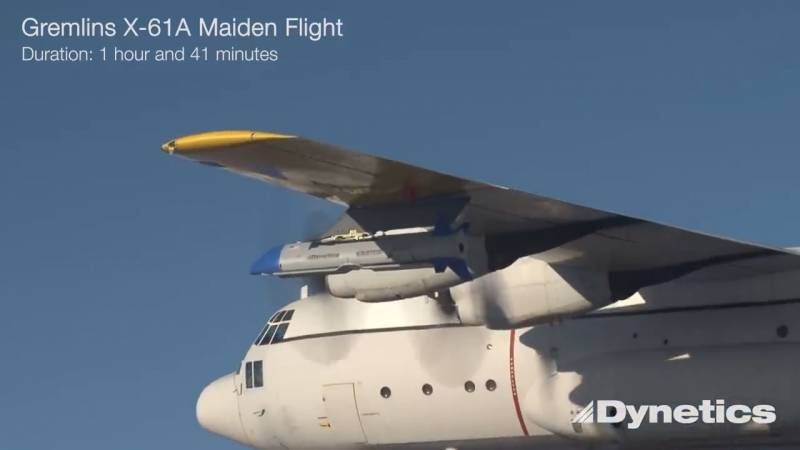 X-61A Gremlins in testing. Photo by Dynetics, DARPA
First of all, they plan to entrust him with optical-electronic reconnaissance and electronic warfare. It is proposed to provide the possibility of group work of drones controlled by one carrier. Depending on the specifics of the mission, the return of the UAV to the carrier or landing with a parachute is possible.

In November 2019, the first flight took place with the X-61A under the wing of the carrier aircraft. In January, the UAV was sent on an independent flight for the first time. The flight itself was successful, but the device crashed on landing due to the failure of the parachute system. In August, another flight took place, completely successful.

DARPA and Dynetics retain four of the five X-61A UAVs built. The testing and development of the technique is ongoing and can lead to the desired results. However, it takes a lot of time to complete the project, and a combat-ready aviation complex will appear only in a few years. 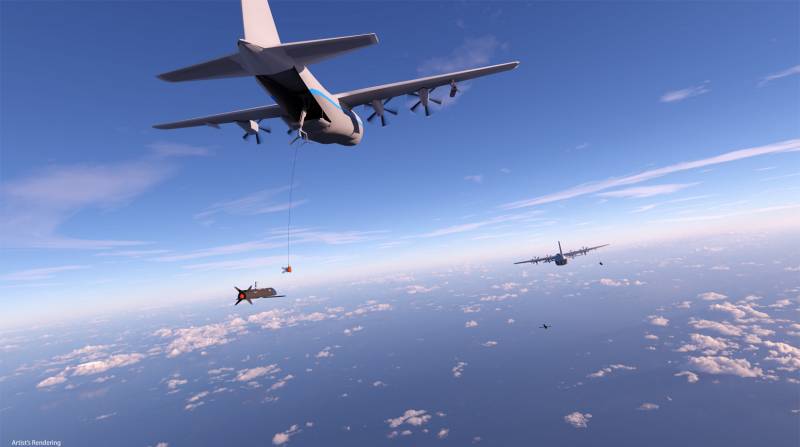 Receiving the X-61A UAV on board the carrier. Dynetics Graphics

From the late forties to the present, the United States has developed a number of aviation systems, including an aircraft carrier and a "parasitic" aircraft. Not all such projects even reached the test, and only one complex was formally adopted for service - but was not fully used.

Such dubious results of the entire direction are associated with a number of characteristic problems. Already in the late forties, the high complexity of uncoupling and docking of aircraft, due to aerodynamic phenomena, was revealed. In addition, difficulties arose when creating docking means, etc. At the same time, we managed to accumulate a lot of experience and find fundamental solutions to some problems. It is not known whether it will be possible to fully apply them in the new project of a flying aircraft carrier with a UAV. However, the expected success of "Gremlins" will become a spectacular point in the protracted epic, which began in the middle of the last century with "Goblin".

Ctrl Enter
Noticed oshЫbku Highlight text and press. Ctrl + Enter
We are
American fighter McDonnell XF-85 GoblinAn-12 in Afghanistan
38 comments
Information
Dear reader, to leave comments on the publication, you must to register.