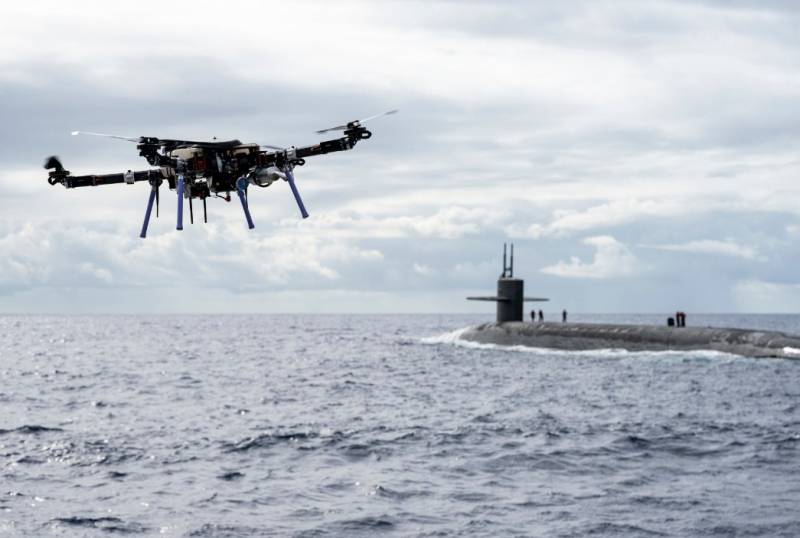 The US Navy is exploring new possibilities for using UAVs. This time, drones are supposed to be used to supply submarines during campaigns.


In 2019, the US Navy was already testing the possibility of transferring cargo from one submarine to another using marine helicopters. aviation... Now it's time for drones to implement the new concept. An unmanned aerial vehicle delivered a small payload to the USS Henry M. Jackson, an Ohio-class ballistic missile submarine.

The submarine followed in the Pacific Ocean, near the Hawaiian Islands. The naval command said that this was a test of new concepts for organizing the supply of submarines while on patrol.

Thanks to this replenishment scheme, it is possible to maintain the reserves of the underwater fleet anytime and anywhere in the world. Consequently, the overall readiness of the US strategic forces is also increasing. At the same time, the US Navy Command did not specify what kind of payload the drone delivered to the submarine. Some footage shows the drone being launched from a small boat of an unknown type.

However, the lack of information about the nature of the payload on the UAV prevents analysts from drawing more specific conclusions about how useful the new supply concept will be. But on the whole, it seems to be quite interesting, with potential at least in the sphere of moving small but critical cargo, such as medicines or food.

In addition, with the help of a drone, orders, reconnaissance information and other data on physical media can be transmitted to submarines. Such a scheme frees from the risks of radio interception by enemy forces. That is why the Pentagon believes that the supply of submarines with the help of drones will be especially relevant in relation to strategic submarines of the Ohio class, which are armed with ballistic missiles and have been on campaigns for months. For example, with the help of drones, it will be possible to transmit an order to launch a missile strike at a certain point, and this order will not be intercepted by enemy electronic warfare means.

This is how the delivery of cargo using a drone to a submarine looked like:

However, as noted by Joseph Trevithick of The Drive, the proposed concept is far from perfect. First of all, submarines become vulnerable, which need to go out and move along the surface to receive cargo or information from a drone. The location of the vessel from which the UAV is launched in the immediate vicinity of the submarine's location also significantly increases the risk of its detection by the enemy. The way out of this situation could be the development of such drones that could sink under water.

Control and communication channels between the UAV and its operator may also be under threat. Therefore, the further development of the concept of supplying submarines with the help of drones will be inextricably linked with a general increase in the autonomy of unmanned aerial vehicles.

In addition, drones will not be the only way to deliver information and cargo for submarines and surface ships of the US Navy anyway. For example, the day after the drone's cargo delivery capabilities were tested, the MH-60R Seahawk helicopter from the 37th Naval Attack Helicopter Squadron performed a similar action.

In any case, the implementation of the new concept of supplying submarines and ships will significantly improve the efficiency of the US Navy's operations in the Pacific and Arctic regions. The importance of new methods of delivery of cargo and information will increase as the duration of the stay of ships on campaigns and as the number of warships and submarines in the US Navy grows.

Ctrl Enter
Noticed oshЫbku Highlight text and press. Ctrl + Enter
We are
Yuri Drozdov: Russia prepared the role of the sacrificial calfThe Dangerous Future of US Strategic Forces (PetroleumWorld, Venezuela)
22 comments
Information
Dear reader, to leave comments on the publication, you must to register.