Putin himself raised the issue of "northern territories" - Japanese press 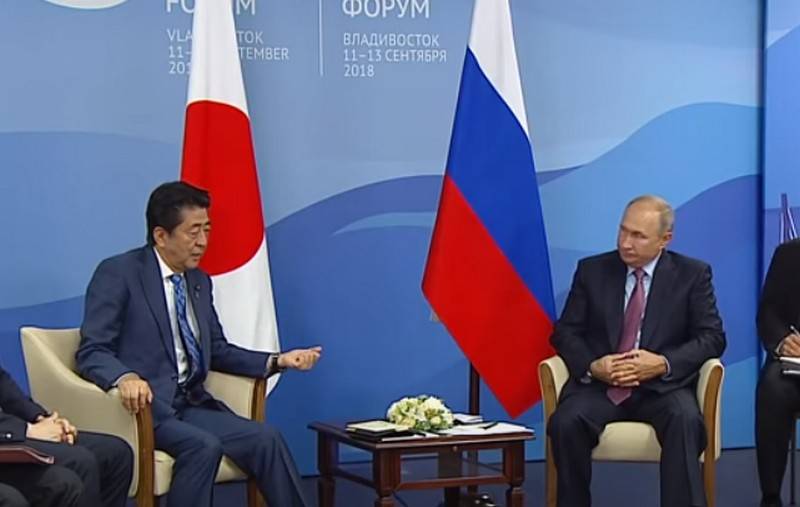 Putin and Abe in Vladivostok

At the end of September, Russian President Vladimir Putin held a telephone conversation with Japanese Prime Minister Yoshihide Suga, in which he himself raised the territorial issue and offered to confirm the agreement to accelerate negotiations on a peace treaty based on the 1956 Soviet-Japanese declaration. In 2018, Putin and Abe held talks in Singapore and agreed to take as a basis the declaration, which refers to the transfer of the islands of Habomai and Shikotan to Japan after the signing of a peace treaty. The parties also agreed to speed up the negotiations.

This proposal came as a surprise to Japan, the newspaper writes. Thus, Russia itself has confirmed the course taken even under Abe to return first two islands, and then all the "northern territories."

It is very important for Tokyo that it was Putin who raised this problem, and not Suga, since earlier the initiative came more often from Japan, Russia did not react to proposals to return the territories.

Deputy Secretary General of the Japanese Cabinet of Ministers Naoki Okada, who was present during the conversation between Putin and Sugi, limited himself to a statement:

There was a conversation about confirming the agreements. I don’t want to give details, but the parties came to an agreement that negotiations should be accelerated

Russia is no different from the DPRK and South Korea. Pretends to return and set conditions. And this is repeated several times. Russia is simply bothering Japan, hinting at a return. But she is not going to give the islands

Last year, South Korea surpassed Russia in terms of GDP, although its population is half that. Russia is on the verge of collapse. Japan has already put in enough effort, so that's enough. It is necessary to break off economic cooperation and negotiate tougher

Russia does not want to give up the islands! It is moving closer to Japan due to the collapse of the ruble in connection with the annexation of Crimea. Putin raised the territorial issue because he wants to export salmon, caviar and crabs from the Southern Kuriles to Hokkaido. This will help maintain military bases. There is no reason to give the islands at all

Putin felt a response on the phone - the perfect chance to appease Suga. Perhaps he will remove Japan from the red list and set other traps. It is useless for an amateur in the field of diplomacy Suga to compete with Putin, who has seen a lot in his lifetime

Putin has already announced in Russia that the territorial problem has been resolved. In the South Kuriles, they are implementing a demographic policy and strengthening the military power of the islands. Doesn't Suga realize that this is bait to get help from Japan? The DPRK is also acting on the issue of the kidnapping of the Japanese. For Russia, there are no advantages in the return of territories

Idiocy. Hopefully Suga doesn't take this bait. In any case, Japan gives money in Russian-Japanese diplomacy. Russia has no money. Putin only proposes a scheme that uses a spoon to fuel public opinion in Japan. The Japanese money will then be divided between Japanese and Russian officials
Ctrl Enter
Noticed oshЫbku Highlight text and press. Ctrl + Enter
We are
Japan elected new prime ministerMoscow and Tokyo intensify negotiations on a peace treaty
62 comments
Information
Dear reader, to leave comments on the publication, you must to register.