October 22, 1962. Quarantine that could end with a nuclear "apocalypse" 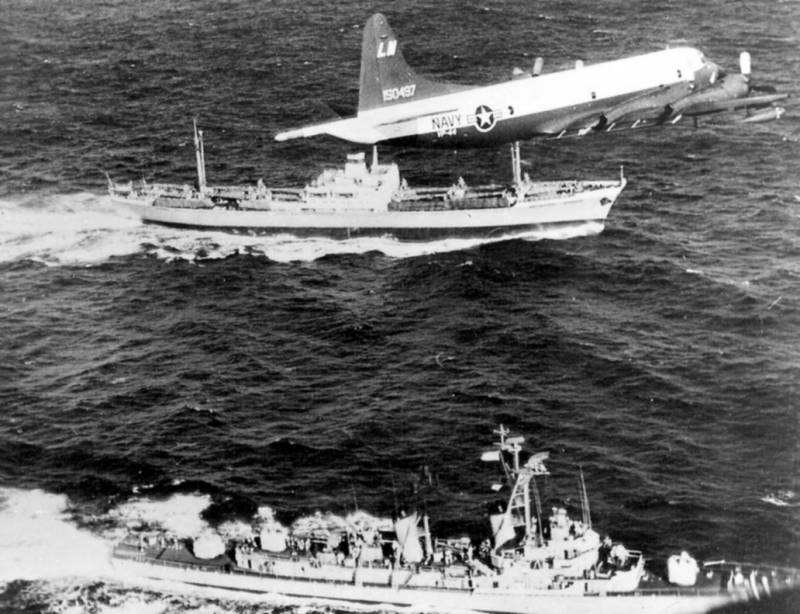 In our difficult days, the word "quarantine" has become, alas, not just habitual, but almost the most common for tens and hundreds of millions of people on the planet. However, the decision announced 58 years ago in his address to the nation by US President John F. Kennedy meant something completely different. It was about the naval blockade of Cuba, to which at that time ships with nuclear missiles and components of launchers for them were moving at full speed from the USSR. The world froze on the brink of a suicidal global conflict.


Today this confrontation is known to us under the name of the Cuban Missile Crisis, which is considered by most historians to be the moment of the greatest approach of humanity to self-destruction in the flame of a thermonuclear war. As everyone probably remembers, it all began with the deployment of 15 PGM-19 Jupiter medium-range missiles by the United States in Turkey. Medium, then average, but these missiles, capable of carrying an atomic charge, could hit Moscow and most of the industrial and administrative centers of the USSR without any problems.

Taking into account the fact that they were able to cover the distance to their targets in just 10 minutes, our country was, in fact, completely defenseless against a possible strike. Moreover, at that time the Soviet Union had a significant lag behind the United States in the field of strategic nuclear weapons. He had several times less warheads and effective delivery vehicles! Yes, the three hundred warheads and bombs that the USSR had would have been enough for the Americans (like the USSR had 6 American), but the question was whether the USSR would have managed to strike at least in return. Located in such perilous proximity, the Jupiters seriously altered the balance of power.

The answer was found quickly enough and in a truly Khrushchev manner - simply and “angrily”. Since the impudent Yankees are pushing rockets at our side, we will put our own in their "backyard", in Cuba! Moreover, Commander Fidel has long longed for a much closer friendship with Moscow. Here he will receive it. In addition to the Soviet military contingent stationed on Freedom Island and the atomic arms... Tellingly, Castro did not really express the slightest objection to this turn of events, having his own specific motives.

Socialist Cuba stuck out like a bone in Washington's throat, its leader understood that an attempt to bring “democracy” to the island in a missile and bomb version was only a matter of time, and not too distant. So maybe the presence of the Soviet Army will cool hot heads in the United States? Looking ahead, I will say that everything turned out exactly the opposite, but at the initial stage events developed quite well: the USSR launched Operation Anadyr, during which two dozen R-12 missiles were sent across the ocean, hitting at 2 kilometers, and sixteen R -16, which had twice the range. Each of them was ready to convey a fiery thermonuclear "hello" of 1 megaton to both Washington and most of the bases of the strategic aviation The US Air Force.

The problems began from the moment when the American U-2 spy planes diving over Cuba with might and main recorded the presence there of both being built and already fully equipped positions of Soviet ballistic missiles. A fascinating photo reportage on this topic first came to the CIA, and then to the Pentagon and the White House. For the US leadership, this news has become a cold shower. At the highest level, immediate consultations were launched on the response. Basically, all the proposals boiled down to three: to hit the missiles, "before it's too late" (although in fact it was too late), start an invasion of the island, or try to completely block it. Fortunately, we settled on the latter.

The problem was that a naval blockade, according to international law, is already an act of war in itself, as opposed to the deployment of any weapons anywhere. The Americans really did not want to act as aggressors, because on October 22, Kennedy announced only a quarantine - the US Navy patrolling the area around Cuba of 500 nautical miles in order to "prevent the transportation of weapons to the island." Moscow answered unequivocally that the captains of the Soviet ships would not even think to follow any orders of American naval sailors, and in which case the USSR would take "any measures" to ensure their safety.

Four ships, loaded with missiles, accompanied by the same number of submarines that covered them, continued on their way to Liberty Island. Then events began to develop according to the brutal scenario that everyone remembered: both the United States and the USSR, and their NATO and OVD allies brought their troops into a state of complete combat readiness, there was continuous correspondence between the leaders of states, as emotional as it was fruitless. In attempts to reach an agreement peacefully, the next U-2 shot down by Soviet rocket engineers over Cuba and the death of its pilot almost put it ... In the end, everything came to the "black Saturday" on October 27, when orders were almost given, which, most likely, would draw the line under history humanity.

Ultimately, the crisis was resolved to the mutual satisfaction of all parties - in exchange for the withdrawal of Soviet troops and nuclear weapons from Cuba, Washington made a firm promise to abandon plans to invade Cuba, which, surprisingly, is still being fulfilled. Also, the United States removed its missiles from Turkey and generally after that began to behave somewhat more modestly. The history of the Cuban missile crisis still contains a whole heap of reservations, secrets and mysteries, despite the fact that a whole library has been written about it and many films have been shot.

One of these "white spots" is the story that happened on the same day when John F. Kennedy, shocking and awe his compatriots, broadcast from TV screens about the quarantine for Cuba and Soviet missiles aimed at them from there. On October 22, 1962, one of the most famous "werewolf" spies in the history of the USSR, Colonel of the GRU Oleg Penkovsky, who worked diligently for both American and British intelligence, was quietly detained in Moscow. To this day, the most heated debates of people holding directly opposite points of view are going on regarding his role in the Cuban missile crisis.

Some of the researchers are inclined to believe that it was Penkovsky who "leaked" the top-secret "Anadyr" to the CIA, which is why the Americans were ready. Others argue that, on the contrary, the information provided to them that the Kremlin will in no way back down in this conflict forced Washington to be compliant and deter Kennedy from attacking Liberty Island. Still others even claim that the traitor-colonel by the time of the terrible events was under such tight control of the KGB officers and his own colleagues that he could not transmit any information to the West at all.

One way or another, Penkovsky was shot by the verdict of the Military Collegium of the Supreme Court of the USSR and took the absolute majority of his secrets to the grave. The fact that the handcuffs on his wrists were snapped into place on the day that almost became the point of the last countdown before the nuclear Apocalypse is most likely a coincidence. Although ... Who can know for sure?

Ctrl Enter
Noticed oshЫbku Highlight text and press. Ctrl + Enter
We are
Chernobyl notebook. Part of 3Caribbean script. Part 1
60 comments
Information
Dear reader, to leave comments on the publication, you must to register.