Ukraine will build a new Sevastopol 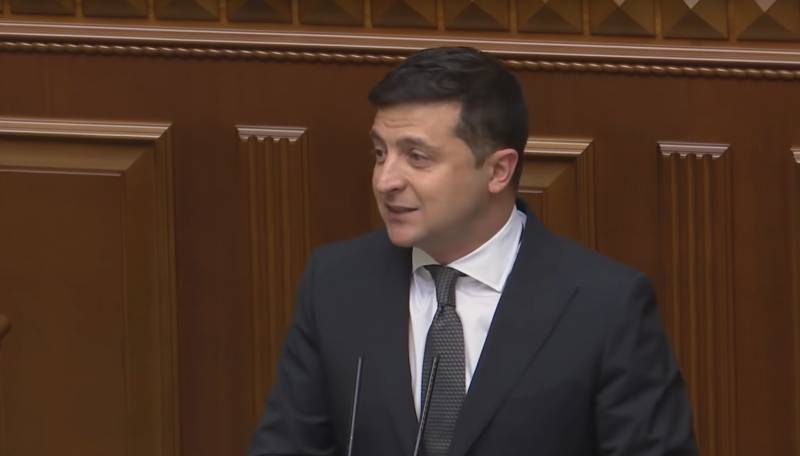 A significant event for Ukraine, the report of President Zelensky on the work done before the Rada deputies, made a depressing impression on many. And not because there was no report as such, but there was another pre-election campaign. The speech of the Ukrainian president showed the full depth of the country's dependence on Western partners and Western money.


The words “Ukraine has created”, “We have achieved”, “Our partners in the West” and others, said in a menacing voice from the rostrum of the Rada, aroused more laughter than interest. The topics raised by Zelensky in the message (I repeat, I consider this to be another pre-election speech) did not in any way concern the people of Ukraine. And if they did (for example, increasing the salaries of doctors by 300%), they caused a storm of negativity.

About a third of the presentation was devoted to military topics. New weapons, new relations with NATO and so on. Therefore, it was interesting for me to understand what the Ukrainian president really wants to say. Is it proclaiming preparations for a war with Russia or a military solution to the Donbass problem, as some analysts say? Or does he really want to create a modern Ukrainian army?

After hearing from the President of Ukraine, I get the impression that in the perception of Ukrainians, the word "modern" is something like a synonym for "not Soviet". And it doesn't matter at all that much of what from Western countries will somehow be supplied to the Armed Forces of Ukraine and the Navy has long been decommissioned and withdrawn from the armies of the supplying countries. The main thing is to be "made in ..."

Probably, in this way, officers and soldiers of the Ukrainian armed forces are "retrained" for Western weapons. That is to say, from simple to complex. First, old scrap metal, and then something that looks more like modern weapon... I cannot find any other explanation. Buy on credit and for a lot of money what is dumped in a landfill ... But Ukrainian logic bears little resemblance to formal boring logic.

Is the same история and with the latest Ukrainian weapons systems. Zelensky listed them in some detail in the list of his victories. Take old, Soviet era development and modernize them to the modern level. Isn't it a way to the future? Probably, this can also lead somewhere, to some kind of mythical future. But making the army capable of resisting really new weapons is hardly.

With what pride President Zelensky talked about the deliveries of American coast guard boats ... And that the Ukrainian fleet will receive British boats! .. I was not too lazy and found the last contract for the production of those boats that the Ukrainian Navy will have. So, the last boats of this series (Barzan) were built by the British in the 90s of the last century for one of the Arab countries (Qatar). Probably, the Ukrainians believe that these boats were so much ahead of their time that they are still relevant for the military fleet.

In fact, what Zelensky said about the construction of new naval bases in the Azov and Black Seas has already been announced earlier by the deputy head of the presidential office, Igor Zhovkva. As well as the fact that this decision was made after a visit to London. It was Zhovkva who also announced that one of the bases, in my opinion, the Black Sea, would be built by the British.

"We are starting to build two state Ukrainian naval bases to protect the Black Sea region," so that "no one else would even think that it is possible to encroach on our sovereignty, territorial integrity or take away part of Ukraine's territory without a single shot." Terrible? Quite. Are we scared? No. Then why is this statement? Or, after the next modernization, the former Soviet KGB patrol ship "Kirov", renamed the Hetman Sagaidachny naval frigate, will be renamed a cruiser, and it will drive Russian ships across the Black Sea?

The Ukrainian president also announced modernization. To build even one new base from scratch, Ukraine will need at least $ 4-6 billion. Taking into account the construction of infrastructure and other auxiliary facilities. Where to get that kind of money? Judging by the fact that the idea surfaced after a visit to Britain, the money will be allocated in the form of a loan from London and Washington. And even a person who is not particularly versed in Ukrainian affairs understands that a new base is really needed. But it is not the toy Navy of Ukraine that needs it, but the Americans and the British.

The creation of such a base in the new country must be provided with sufficient force cover. Aviation in this case it is not enough. This is where a new base for the fleet is needed. First, a great way to supply your own units. Second, cover from amphibious assault and ground forces. I think the desires of the United States and Britain are clear.

But another question arises. Why is Ukraine? Why go into debt to build a naval base that doesn't solve anything for Ukraine itself? Even in the long term, the Ukrainian fleet in the next decade will not receive something that can be called a combat ship. And for boats, having a huge base is too luxurious. Today the entire Ukrainian fleet is accommodated in Odessa and Nikolaev with comfort.

I will express my own, perhaps for many, unexpected assumption. Sevastopol! Yes, it is the new Sevastopol as a way to have money and do nothing for this! It seems to me that the Ukrainians have again overreached themselves. The train of thought is quite understandable. We build the naval base necessary for the Americans and the British, and then we rent it out on a long-term lease. Only now they started playing not with kind Russians, who always forgive, but with serious sharks, who have already devoured more than one state. Especially the British.

At the same time, Ukraine receives first, funds for the development of its own fleet or for solving other problems. Secondly, the infrastructure of the base itself and the surrounding territories is being modernized, and later repaired, by the Americans and the British. Thirdly, the presence of American and British ships in the territorial waters of Ukraine, albeit minimal, but guarantees the safety of the Ukrainian coast.

We will not speak loudly about the second naval base, on Azov. Simply because the heavy missile cruisers and aircraft carriers that roam the vast deep sea are already naval bases in themselves. Even if the Ukrainians really conceived something to build on the coast of the Azov Sea, it will be URs and coastal batteries. And this is a completely unnecessary waste.

Hate instead of love

Immediately after the President's speech in the Rada, I began to analyze the reaction of the Ukrainian politicians and Ukrainian society. Moreover, I was interested in the opinion of Ukrainians from both sides of the confrontation in the Donbass, Ukrainians from the western and eastern regions, representatives of both pro-government and opposition parties. I wondered if Zelenskiy's speech was the motive that will be decisive in the upcoming vote.

I do not know what the reaction will be today, but what happened yesterday can be safely called a failure. The people quickly reacted to the fact that the president did not want to deal with the economy and social sphere at all. The political parties immediately made a stand: we are not with this gentleman. We are completely different. The military switched to an unpopular language in the media, but widely used in the military.

So why did the Ukrainian president proclaim a course towards war? No, he did not openly say this. But the increase in the military budget, the purchase of weapons, the modernization of old systems, the construction of military bases, and so on, speak of just that. It seems to me that Zelensky has really lost its shores. Indeed, he believes that someone or something will be able to change the balance of power in the Black Sea region. He believes that currying favor with the Turkish president and agreeing to his terms will make the Turks enemies of Russia.

Probably, the time has come when it is time for our political leadership to tell Ukraine directly who is who. Stop just sitting and watching. We need to click on the nose of this presumptuous boy. Every cricket know your six. How this can be done, it seems to me, is also clear. It is impossible to wait for the crazy Ukrainian commander-in-chief to send Ukrainian men to death in Donbass. After all, our people are already there.

For some reason, I remembered trains with coal, metal, wheat and other products of the USSR, which went to Germany on June 22, 1941 ...

Ctrl Enter
Noticed oshЫbku Highlight text and press. Ctrl + Enter
We are
Situational analysis of the death of the MH17 flight (Malaysian Boeing 777), made on the basis of engineering analysis from 15.08.2014Results of the week. "God forbid to see Russian revolt, senseless and merciless!"
67 comments
Information
Dear reader, to leave comments on the publication, you must to register.