Northerners and Southerners. Historical excursion into the era of carbines 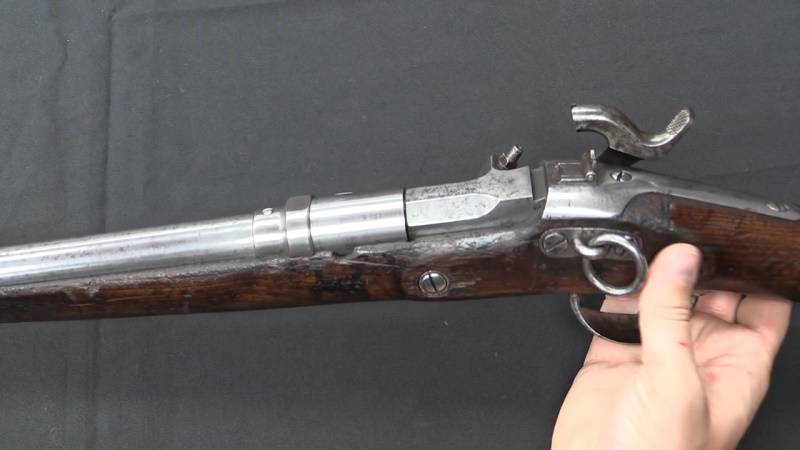 Military affairs at the turn of the eras. The original carbine chambered for a paper cartridge was also patented in the USA by Edward Linder, an American of German descent. Production was established at Amoskeag Manufacturing Co. from Manchester, New Hampshire. Was in service with the army of the northerners, although in very small numbers: 892 carbines (900?). The enterprise received $ 19 for them. Another $ 859 was paid for 2262 rounds of ammunition. Caliber 100, paper cartridge. The carbine was notable for its meticulous workmanship and decoration, light weight and dimensions.

The design of the carbine was quite unusual. The bolt in the form of a steel bar swung in a vertical plane inside the receiver. There was a spring under the bolt that lifted it up with the opening of the charging chamber. On the breech of the barrel there was a rotating clutch with a cutout, which was controlled by a small lever located on it in the closed position on the right. When, grasping this lever, the shooter turned it all the way to the left, a cutout was opened on the sleeve, through which the spring lifted the bolt up. The cartridge chamber was loaded with a paper cartridge, after which the clutch for the lever had to be returned to its original position. On the inner surface of the coupling there was a protrusion that fell into the annular groove of the charging chamber and ... attracted the chamber to the barrel when moving. An additional means of protection against the breakthrough of gases was an asbestos washer that was put on the cylindrical part of the shutter! 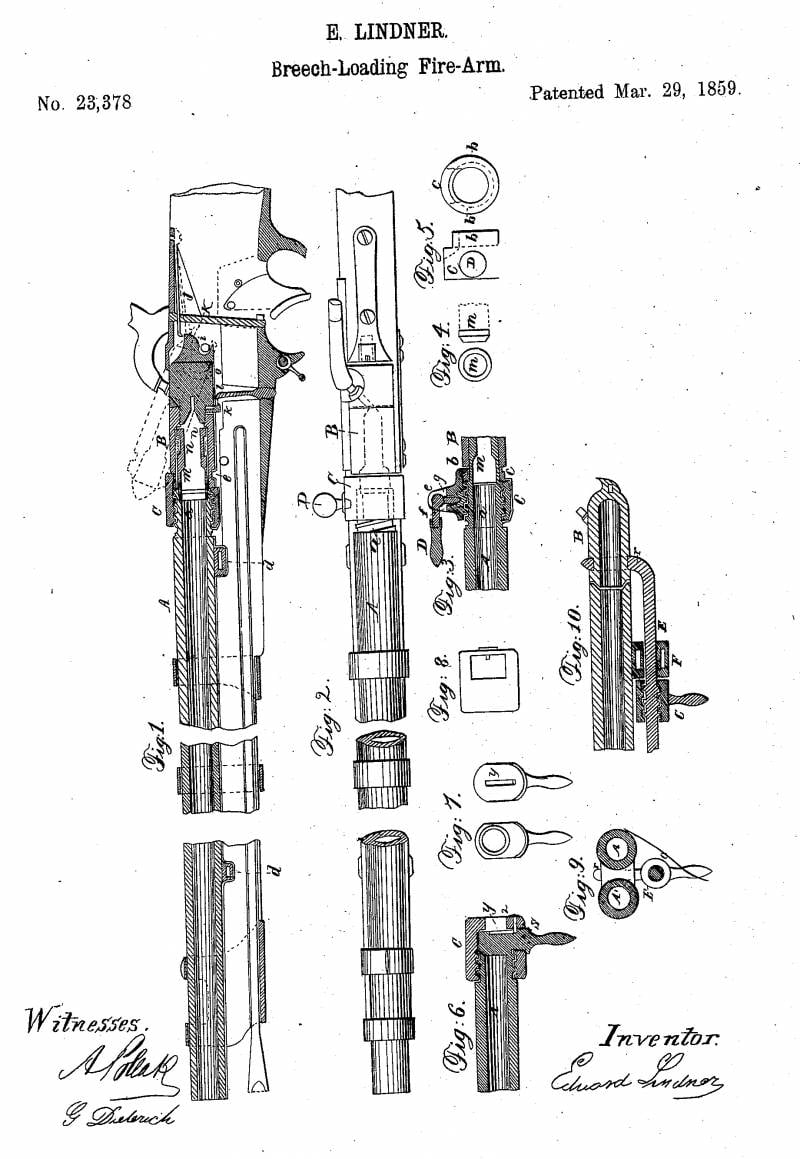 Linder's patent
The inventor noted that the advantage of this system is a rather simple alteration of the outdated muzzle-loading weapons into the breech-loader by installing a pair of parts, which, of course, was beneficial in all respects.

Alteration of the Austrian rifle according to the Linder system (above) and a carbine of its design (below)
However, when the sample presented by Linder was tested in January 1859, the army rejected it. In the report of the army specialists, the following was written: "In our opinion, this carbine does not have the simplicity and durability required for military weapons." In addition, when firing, the bolt became very hot, which, of course, also made it difficult to use.

But with the outbreak of the Civil War, everything magically changed. Both Linder and K received their first order for these carbines, issued upon receipt of the 1st Michigan Cavalry Regiment at the end of 1861 and used until the end of 1862, when the regiment was re-equipped with Sharps carbines.

The second batch of 500 units was sent to West Virginia in April 1863, where they were armed with the local 8th Cavalry Regiment. 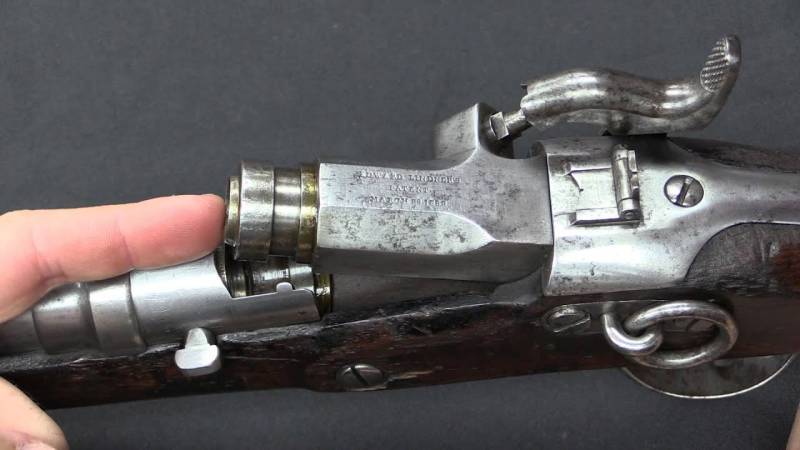 Linder's carbine in loading position. The clutch lever and the protrusion on it opposite the annular groove on the cylindrical part of the shutter are clearly visible. The hole for mounting the bolt axis was not round, but oval, which made it possible to pull the bolt to the barrel
The successful use of carbines in battles led to the fact that the army ordered 6000 of them to the company at once, but their delivery was completed only in May 1865, when they were no longer needed by anyone. The carbines ended up in a warehouse, where they lay until the Franco-Prussian war, when the company still managed to sell them to the French. Many carbines for the sake of economy were made from muzzle-loading primer rifles purchased in Europe and then sold to Brazil, Argentina and Paraguay, where the local military used them in various pronunciamentos and for settling national accounts.

The Jenks carbine is the second breech-loading rifle in the US Army (the Hall rifle was the first). It was adopted by the Navy in 1841. It was a .52 breech-loading smoothbore carbine with an unusual side hammer and a piston bolt that was locked by a lever system. Outwardly simple and elegant, very lightweight but durable. So it was characterized by many, that is, for its time it was a very modern and well-designed weapon. True, his nickname was rather strange: "Mule's ear." Apparently, someone thought he had the appropriate shape of the trigger, because there were simply no other parts protruding on it!

Jenks carbine
Arranged carbine was nowhere easier. To shoot, you had to put the trigger on the safety cocking, then open the bolt with the upper lever, then throw a bullet into the opened hole, pour the gunpowder there, close the hole by lowering the lever, cock the trigger completely - and bang-bang!

By the way, the inventor also took care of the convenience of the shooter, considering that the lateral location of the seed rod would better protect his face from fragments of a broken primer.

Receiver and trigger of Jenks carbine
Jenks's carbines were produced with Maynard's device, which provided automatic feeding of paper tape with primers. The Remington company produced 1000 such carbines. 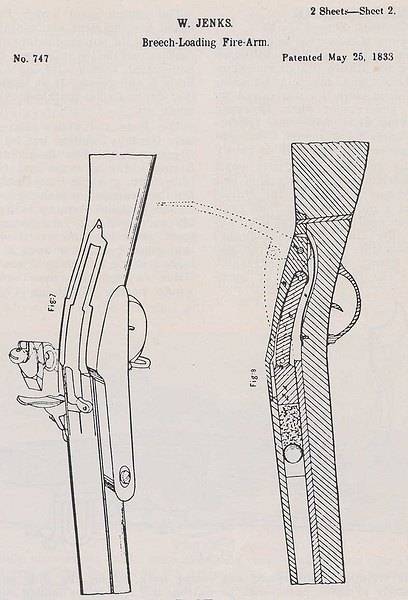 William Jenks received the first patent for his carbine back in 1838, and his mechanism, like Hall's rifle, was flint
The military did not like it, and in 1841 Jenks offered them a version with a primer ignition. The army did not accept it either, since both the rifles and Hall's carbines were fine with them, but the sailors liked it, and they ordered 1500 carbines with barrels of different lengths. Then the fleet ordered another 3700 short-barreled carbines, that is, a total of 5200 were manufactured. 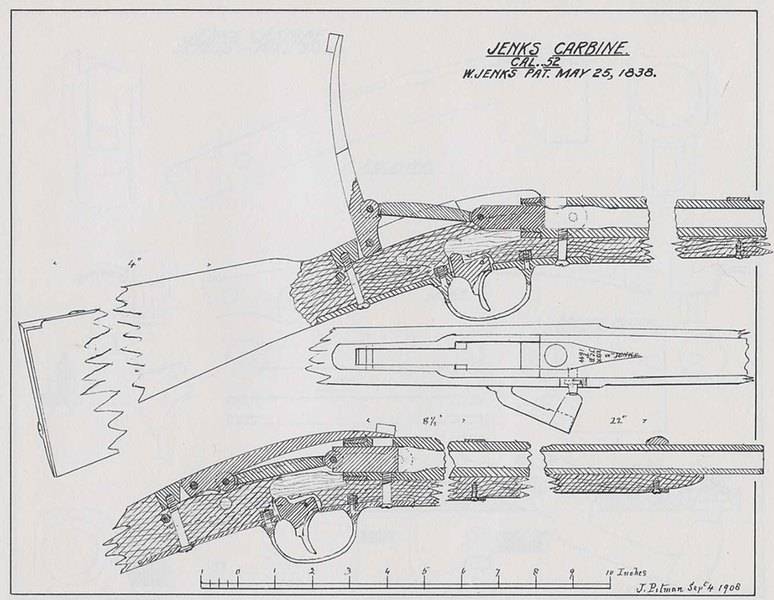 Jenks carbine diagram
During the Civil War, the Navy removed from service 2800 Jenks carbines and sold them to a certain Mr.Marston, who made a rifling in their barrels (the caliber increased to .54 because of this), and adapted them for Merril's cartridge, adding also a cavalry-type swivel ... The carbine turned out to be very successful, durable and simple. Weighing just over 2,4 kg, it consisted of only 34 parts! And this despite the fact that the muzzle-loading musket had 56, and Hall's breech-loading rifle had 71. 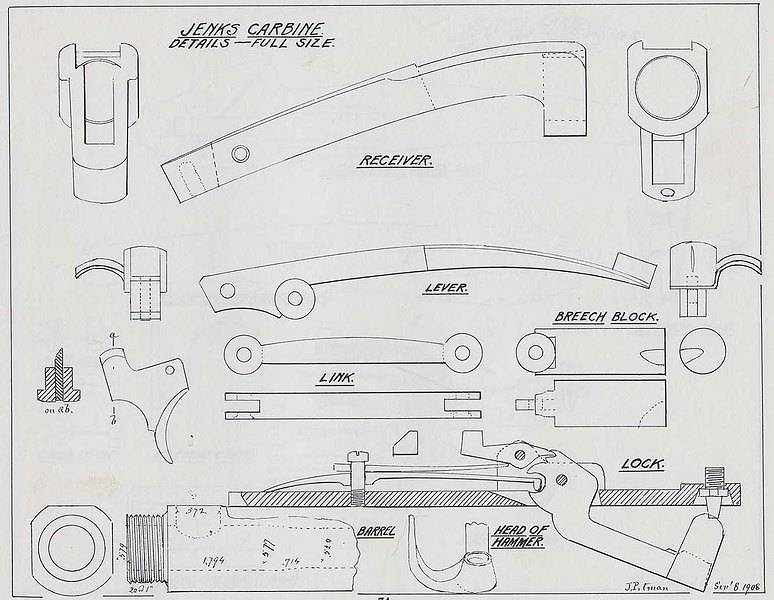 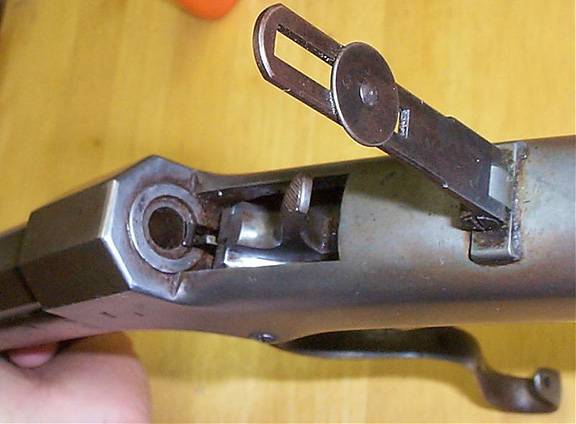 Ballard carbine breech with recessed bolt and trigger
Ballard's rifle was produced in the United States in 1861-1873. and had an original bolt, controlled by a lever that lowered the bolt together with the trigger. No one else thought of this then, although the shutter itself, vertically moving in the grooves of the receiver, was not in the USA news... Caliber - from .32 to .52. Rimfire cartridges. The firing range is up to 1000 yards. The most widespread was the .44 caliber, and the rarest .52 Spencer 56-56. 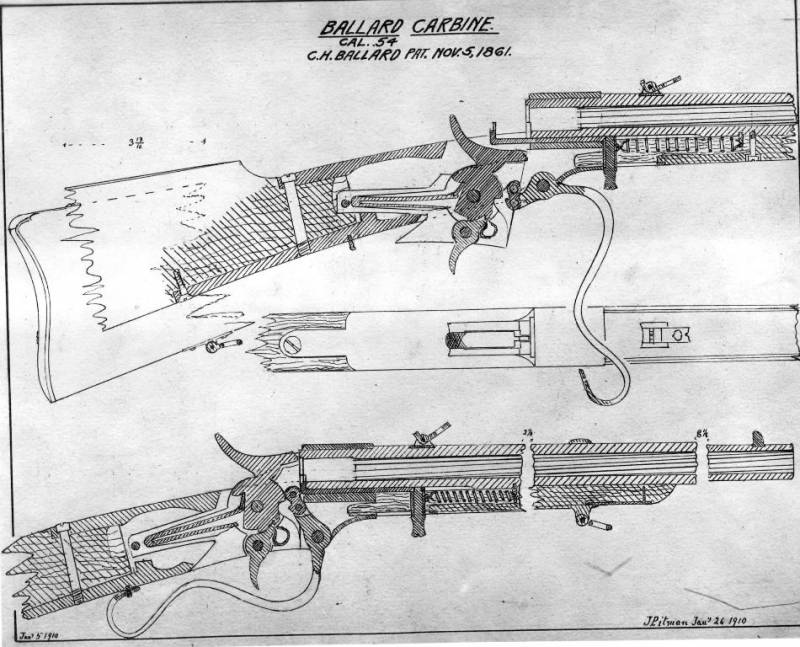 Ballard carbine device diagram
Charles Henry Ballard received a patent for his shutter mechanism, which lowers along with the trigger, back in 1861, and there were only five parts in it! The shooter lowered the bolt, inserted the cartridge into the chamber, and then returned the lever to its original position, while the hammer was cocked, but only halfway. That is, it was automatically put on a half-platoon. To fire, the shooter had to fully cock the hammer and pull the trigger. As soon as the breech opened for reloading, the spring extractor automatically ejected the spent cartridge case. If suddenly the force of the spring was for some reason not enough, it was possible to use the extractor handle protruding from below and, using physical force, still remove the sleeve from the chamber.

Ballard's cavalry carbine chambered for .52 Spencer 56-56
Ballard's first rifles were produced by Ball & Williams of Worcester, Ballard's employer, and were purchased by the state of Kentucky. Soon, however, single-shot carbines began to give way to multi-shot, and purchases of Bollard carbines fell sharply. In 1874, the Ballard patent was bought by John Marlin, who began producing target rifles of his design.

Ballard Target Rifle
Consider the Remington cavalry carbine. It was produced in the USA in 1865-1866, had a caliber .46 and fired with rimfire cartridges (first type) and .56-50 Spencer cartridges (second type). Firing range 500 yards.

Remington carbine, second type
It is interesting that the bolt, which became the highlight of the design of the carbine and all subsequent Remington rifles, was patented by Joseph Ryder, a shoemaker by profession! He had already worked with E. Remington & Sons, received a lot of money from it, and then moved to Newark and opened a jewelry store there. But the soul of the inventor, apparently, dreamed of creativity, so he continued to work with Remington and in 1863 invented his surprisingly simple shutter, similar to the letter "P", in the center of which was a trigger, supporting the shutter with its protrusion. To load such a carbine, the shooter had to pull the trigger back all the way, that is, put it on a full platoon, and then pull the bolt back by the side "ears". In this case, the extractor removed and discarded the spent cartridge case. Then a cartridge was inserted into the chamber, the bolt returned to its place, and the carbine was ready to fire. 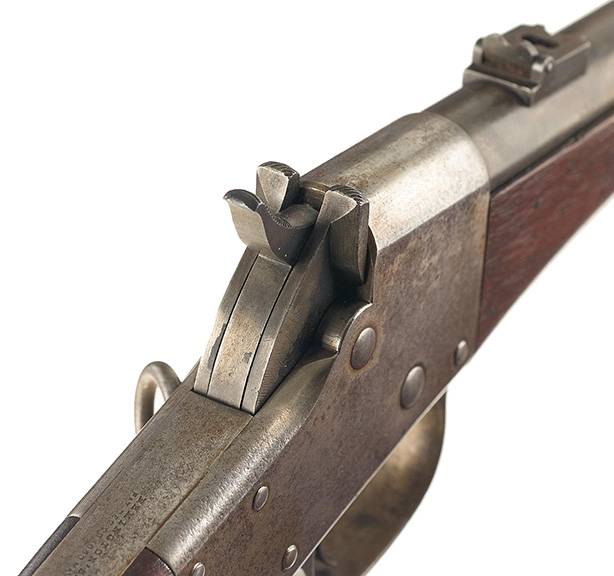 Remington carbine bolt and trigger, second type
Historically, it so happened that at the end of the war, many of the Remington carbines ended up in warehouses, but the company bought them and sold them to France during the Franco-Prussian War of 1870-1871.

Author:
Vyacheslav Shpakovsky
Articles from this series:
An inexhaustible theme. American Civil War and its carbines
Leather carabiner
The "carbine epic" continues
The carbine epic of the northerners and southerners
General Burnside's carbine: the first with a metal cartridge
People and spades
Rondash and rondachiers. From benefits to beauty
Artillery of the conqueror of Europe
Artillery innovations of the civil war between North and South
Mortars "Dictator" in the battles of the North against the South
Shuvalov's "secret howitzer"
North and South: smooth-bore and rifled guns
US Civil War ammunition
The most popular caliber of the North and South
Cannons of Tredegar and the Noble Brothers
Cannons of Brooke and Viard
James and Sawyer cannons: rifled versus smoothbore
"The parrot gun." Man and his instrument
Faceted bore gun

Ctrl Enter
Noticed oshЫbku Highlight text and press. Ctrl + Enter
We are
General Burnside's carbine: the first with a metal cartridge“Great Rifle US Drama” (Rifles by countries and continents - 3)
13 comments
Information
Dear reader, to leave comments on the publication, you must to register.