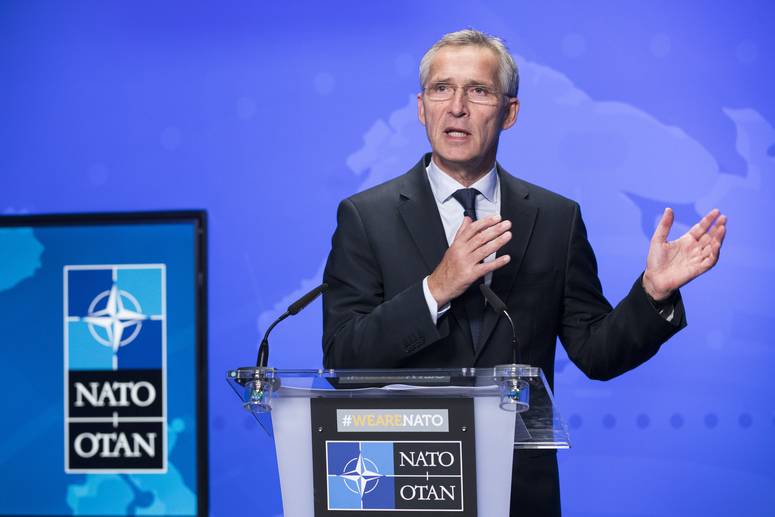 The phrase that only three things are needed for a war - money, money and money again, became a textbook even in the hoary antiquity. Moreover, it corresponds to reality exactly 100%. However, maintaining peace, which, as the North Atlantic Alliance officially declares, is its main goal, is also not cheap, especially if you start arm yourself to the teeth for the sake of peace.


What is the cost of striving to "keep the powder dry" for NATO member states?

Before talking about the current amount of funding by the North Atlanticists of their own "defense", one should recall history question. The decision to annually raise the level of their military spending by the countries of the bloc was made around the end of the 70s at the suggestion of the United States. The North Atlantic Treaty Organization was then relatively small, 16 member states, and therefore everyone had to try. True, only Americans, Canadians, Spaniards, Norwegians and for some reason the inhabitants of Luxembourg went further than declarations.

Already two decades later, the question, in fact, has lost its relevance: the USSR and the Warsaw Pact Organization (the former members of which vied with each other began to enroll in NATO) collapsed. There seemed to be no one to defend against. Sighing with relief, the vast majority of European governments began to mercilessly "cut" their own military budgets and cut armies, finding government money much better than building new ones. tanks and rockets.

Everything changed again after the events in the United States on September 11, 2001. There was talk about the formidable "international terrorism" against which a decisive and uncompromising struggle should be started urgently. On which, again, you will have to fork out in unison. They bargained, argued like in a bazaar, blamed each other for their frivolous attitude to world security for 5 whole years, and as a result, in 2006, they came to a certain common denominator of military budgets, seemingly obligatory for all states of the alliance: 2% of GDP.

At that time, 5 out of 26 NATO countries met this criterion at the very least. These are the USA (where they spent twice as much on defense needs), Great Britain, France and the eternal antagonists of Greece and Turkey. All the other members of the alliance, including even the neophytes who were rushing there with all their might (Romanians, Hungarians, Czechs and Baltic people) did exactly the opposite: their military expenditures did not grow from year to year, but decreased. As a result, the total financial contribution of Europe to the North Atlantic cause from 2001 to 2014 “blown away” from 37% to 25%. On average, not 2%, but 1,5% of GDP, or even less, was spent on general defense in the Old World.

In 2014, having successfully staged a coup d'état in Ukraine, but faced with the wrong reaction from Russia, which was expected, the North Atlanticists again became alarmed and once again decided at their summit in Bucharest that over the next decade they would certainly reach the two percent target. ... However, the declarations again for the most part remained declarations: three years later, in 2017, this "standard" was fulfilled by exactly the same number of block members as in 2006. All the same Americans, British, Greeks. Poles and Estonians also joined them.

Neither Germany, nor Italy, nor France, nor even Turkey were willing to spend more than 1,5% of GDP on military needs. Belgium and Spain fell short of 1%. All this (especially the "financial pacifism" of the Germans) terribly angered Donald Trump, who came to power in the United States in 2016. At every international summit he did not get tired of making fire for allies in the bloc and repeating that "the Americans are tired of protecting everyone." And that is to say, in the second year of his presidency, the US contribution to the total NATO budget exceeded 70%.

The next time, Alliance General Secretary Jens Stoltenberg was much more realistic. He expressed a fervent hope that by 2025 the coveted 2% of GDP will be spent on military needs at least half of the states making up the military bloc. Last year, NATO's aggregate budget did grow by 4,6%, exceeding a trillion dollars (the highest level since 2012). More than 72% of this amount, as before, falls on the United States and Canada.

Tellingly, the highest rates of growth in defense spending in recent years have been in the Baltic countries, as well as in Slovakia, Hungary, and Romania. However, Poland, with its 2% of GDP and more, is in reality a military budget of more than $ 12 billion, while Germany, with 1,3% of GDP allocated to defense, is investing more than $ 50 billion in the Bundeswehr. Everything is relative, especially percentages and absolute numbers.

How the coronavirus pandemic will affect NATO funding is not yet clear. However, the crisis that has engulfed the entire planet will clearly not contribute to an increase in cash infusions. Now, most of the countries that make up the alliance are faced with the question of saving their own economies, not militarizing them. NATO is unlikely to become more peaceful, but in the near future the alliance will definitely have to save.

Ctrl Enter
Noticed oshЫbku Highlight text and press. Ctrl + Enter
We are
About Stalin and KhrushchevWhat you didn't want to know about England
21 comment
Information
Dear reader, to leave comments on the publication, you must to register.