Red Army showed the way out of the Armenian-Azerbaijani conflict 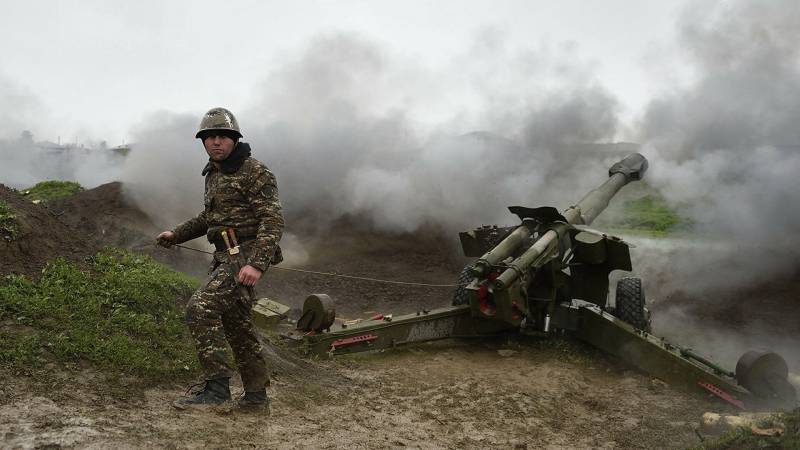 History shows that peace in the Greater Caucasus is impossible without the presence of Russia. 100 years ago, peace in Transcaucasia was restored by the Red Army.


In a week, Soviet troops established a brotherhood of peoples in Azerbaijan (April-May 1920), and in Armenia (late November-early December). With the full support of local workers, the Azerbaijani and Armenian nationalists ("Baku" blitzkrieg "of the Red Army").

It is obvious that the current Armenian-Azerbaijani conflict (the war in Nagorno-Karabakh) has serious historical, religious and national preconditions. But war brings death and destruction, it is not in the interests of ordinary people. In the current conditions (dominance of big capital and nationalist regimes), peace in the Transcaucasus is impossible. The main principle of class (estate) societies is the right of the strong. The inviolability of borders, sovereignty and the right to self-determination do not matter when large offices decide to crush Yugoslavia or Iraq, to ​​cause a war in Syria or Karabakh.

Under these conditions, the Karabakh issue can be resolved only at the cost of a lot of blood. Terror and genocide, as was the case on this land a century ago during the collapse of the Russian Empire and great turmoil, and in the late 1980s and early 1990s. with the collapse of the Soviet Union ... The enemy is destroyed and driven out. And peace and prosperity in the Caucasus is possible only on one condition: inclusion in the great Russian empire-state. There was peace in the Caucasus under the rule of the Russian Tsar or General Secretary. Armenians, Georgians, and Azeri Turks lived peacefully and contributed to the common good. The nationalists, with the full support of external interested forces, did not tear the Caucasus to pieces.

The current aggravation in Karabakh is associated with the plunge of all mankind into chaos. The old order is being destroyed, but the new one has not yet been created. The only remaining superpower, the United States, is sinking deeper and deeper into its internal turmoil. The world is left unattended. Former great powers begin their Game of Thrones. Turkish leader Erdogan is aiming to replace the new Ottoman sultan. Turkey is waging small wars in Iraq, Syria and Libya, challenging Greece. Remembers the historical rights to Jerusalem. Now the new Ottoman Empire wants to restore its sphere of influence in Transcaucasia, takes Baku under its wing, goes to the Caspian Sea and further to historical Turkestan. It is obvious that the West is also interested in the war on Karabakh. While the Western elites are deciding on the future of the planet, the rest of the world needs something to do. Russia is being diverted to one more "front". Ukraine - Donbass, Belarus, Kyrgyzstan, Armenia - Azerbaijan. Who is next?

Before joining Russia, the lands of the South Caucasus (Transcaucasia) were divided among themselves by two Islamic powers: Persia and the Ottoman Empire. Massacre, terror, slavery and genocide were commonplace. For example, the Georgian nation, then consisting of a dozen different tribes, almost died. Some were cut out, some were Islamized. The Georgian tribes were saved only thanks to the Russian soldiers. Several bloody and fierce wars between Russia and Persia and Turkey led to the fact that the lands of today's Georgia, Armenia and Azerbaijan joined the Russian Empire. Russia lost tens of thousands of people in these wars. The long-awaited peace has come to the Caucasus. Georgians, Armenians and Azerbaijanis contributed to the creation of a great power.

The peoples of the Caucasus lived under the "Russian yoke" without any particular problems until 1917. Cities grew and were decorated, new ones were built. Culture and economy developed. The Caucasian population, having got rid of constant massacres, strife, invasions, raids and slavery, has significantly increased in number. Many representatives of the Caucasus entered the all-Russian elite. A lot of blood returned after the start of the Troubles in 1917. Georgian, Armenian (Dashnak) and Azerbaijani nationalists began to fight for "freedom and democracy", actively freed themselves from the traces of "Russian occupation" and along the way began to cut each other. Azerbaijani nationalists (Musavatists), Dashnaks and Georgian Social Democrats tried to create “Great Azerbaijan”, “Great Armenia” and “Great Georgia”. In those historical and geographical conditions, which took shape not even centuries, but more than a thousand years, this automatically led to a series of violent conflicts and wars. Mutual genocide.

Turkey immediately entered the region, providing assistance to the "brotherly Azerbaijani people", and Britain, which had strategic and economic interests (including the oil fields of Baku). Now everything is repeated. The great Russian historian Vasily Klyuchevsky used to say: "History is not a teacher, but a warden: she does not teach anything, but severely punishes for ignorance of the lessons." The bloody massacre in 1918-1920, including the Armenian-Turkish war of 1920, almost destroyed the Armenian people ("How Turkey Attacked Armenia"; “Armenian defeat. How the Turkish army captured Kars and Alexandropol ").

Russia again saved the peoples of the Caucasus. The Bolsheviks won the Civil War. They restored order (including the brotherhood of peoples) in most of the territory of the Russian Empire. They created a new great power - the Soviet Union. With proletarian ruthlessness, they resolved the issue with the Caucasian nationalists, who drowned their peoples in blood. In the Union, the Caucasian peoples lived peacefully, prosperity came again. Ordinary Armenians and Azerbaijanis worked together, fought against the Nazis. The Soviet country was given a lot of scientists, cultural and art workers, teachers and doctors, military and ordinary workers.

Blood and grief came to the Caucasus again in the form of turmoil - the collapse of the USSR. Again, with the external and internal support of a number of Soviet and party leaders who had betrayed the Union, nationalism-Nazism was revived. This was facilitated by their criminal policies of M. S. Gorbachev, the "architect of perestroika" A. N. Yakovlev, the Minister of Foreign Affairs of the USSR E. A. Shevardnadze, etc. What was at first considered catastrophic "mistakes of the center" was in fact thoughtful and methodical work of the liquidators of the Soviet civilization. Criminals and bandits were actively used. Ethnic cleansing and genocide began again. The Karabakh war began. Of course, the US and British special services had a hand in this.

Then the conflict was frozen for a while. But both sides were strenuously preparing for a new war. It is obvious that the current massacre in Karabakh is planned and caused by the same forces as before. Nationalist regimes in Baku and Yerevan are playing off. Armenia is being deceived again, as in 1920: "The West will help." Azerbaijan becomes a vassal and strategic foothold of Turkey in the Caucasus and the Caspian Sea. The "Turkish Sultan" Erdogan's formula "one people - two countries" flows into the formula "one people - one country". Turkish military advisers and pro-Turkish terrorist fighters are being deployed to Azerbaijan. The goal is the Greater Caucasus. Russia is increasingly being ousted from the post-Soviet space. Turkey has set its sights on the Caspian and further to Turkestan and the Volga region (plus Crimea). Erdogan is trying to create a new Ottoman empire, to build the "Great Turan". Russia and Turkey are being prepared for a new Russian-Turkish war.

Ctrl Enter
Noticed oshЫbku Highlight text and press. Ctrl + Enter
We are
About Stalin and KhrushchevWhat you didn't want to know about England
95 comments
Information
Dear reader, to leave comments on the publication, you must to register.