Rescue equipment for submariners of the Russian Navy 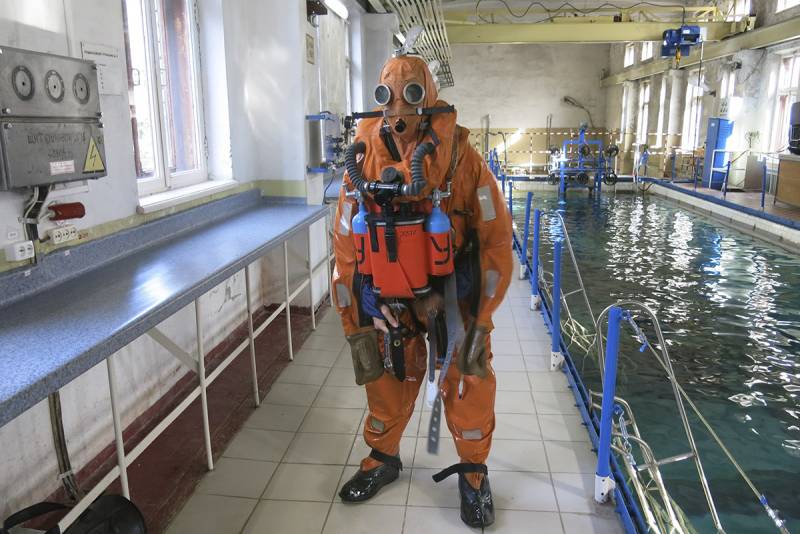 The complexity and danger of the service of the submarine forces impose special requirements on systems and means of rescue. Russian submariners currently have various means of self-rescue at their disposal, and in addition, they can count on the help of the emergency rescue service. All these measures make it possible to evacuate personnel from the damaged submarine and provide them with the necessary assistance.

First of all, the safety and survival of the crew is ensured by the Submariner's Rescue Equipment (SSR), which has been used on domestic submarines for several decades. With the help of the SSP, the submariner can leave the ship and safely rise to the surface. Depending on the means used, rescue is provided from depths of up to 200-220 m.

SSP is available in two versions. The complete set No. 1 includes the SGP-K-1 diving suit, the IDA-59M self-contained breathing apparatus, a belt with a carabiner and the PP-2 parachute system. Completion # 2 uses SGP-K-2 overalls with some differences and the IDA-59M product. The composition of the SSP is determined by the equipment of the submarine's onboard rescue equipment. 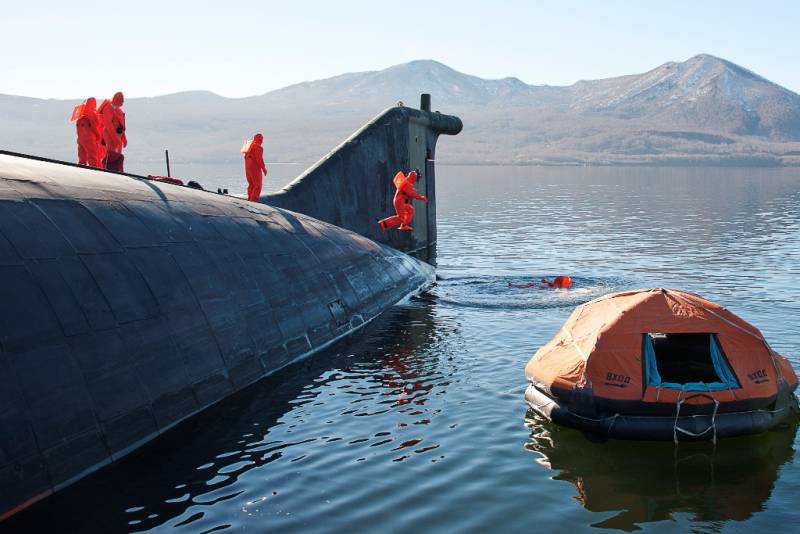 Liferaft training 2017
The SGP-K-1/2 diving suits can be used for temporary stay in compartments at pressures less than 1 MPa (10 atm.) And temperatures up to + 50 ° C, however, its main task is to ensure that the submarine leaves the so-called. wet method.

Rescue hatches (with and without air supply unit), torpedo tubes or a robust wheelhouse can be used as rescue devices for wet exit. Hatches ensure the exit of submariners one at a time, while the wheelhouse simultaneously accommodates up to 4-6 people. In all cases, the same method of application is used: submariners in the SSP occupy space in the volume that serves as a lock, after which it is filled with seawater. Further, those fleeing go outside and begin the ascent.

Free ascent is allowed. When SSP No. 1 is used, the maximum rescue depth reaches 220 m. At depths of 60-80 m, the PP-2 system is activated, which limits the rate of ascent and protects the diver from decompression sickness. Completion # 2 allows ascending from only 100 m. Submariners have at their disposal a buoy-view with a buoype for ascent. With its help it is possible to escape from a depth of 100 m. With the help of the rescue service, it is possible to exit from great depths. 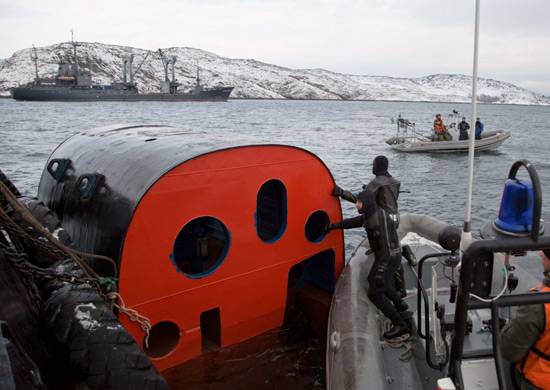 Pop-up capsule of the submarine "Severodvinsk"
Several years ago, it became known about the development of new SSP-M equipment. An improved diving suit and a modern breathing apparatus are being created for him. Due to the use of modern technologies, it was possible to improve the main characteristics of the components of the equipment and, as a result, reduce the risks for the rescued submariner. It was reported that in 2018 the new SSP will enter service, and by 2020 it will be received by submariners of the Pacific fleet... Then it was planned to start re-equipping the submarine forces of other fleets.

If the damaged submarine is on the surface, evacuating the crew is not particularly difficult. There are various types of inflatable liferafts on board domestic boats. At the minimum time, they are thrown overboard and put into action, after which the personnel can go to them. Each raft has an emergency supply with all the necessary components on board. The emergency services must then ensure the boarding and provide the necessary assistance.

Collective rescue of the crew in a submerged position is performed using a pop-up rescue camera (VSK or KSV). Such equipment has been used for a long time and is available on all modern submarines of the Russian Navy. VSK is a durable non-self-propelled underwater vehicle with a multi-tiered arrangement of places to accommodate the crew, emergency supplies, rafts, etc. The camera is located inside the deckhouse / retractable railing, at the very top of the sub. 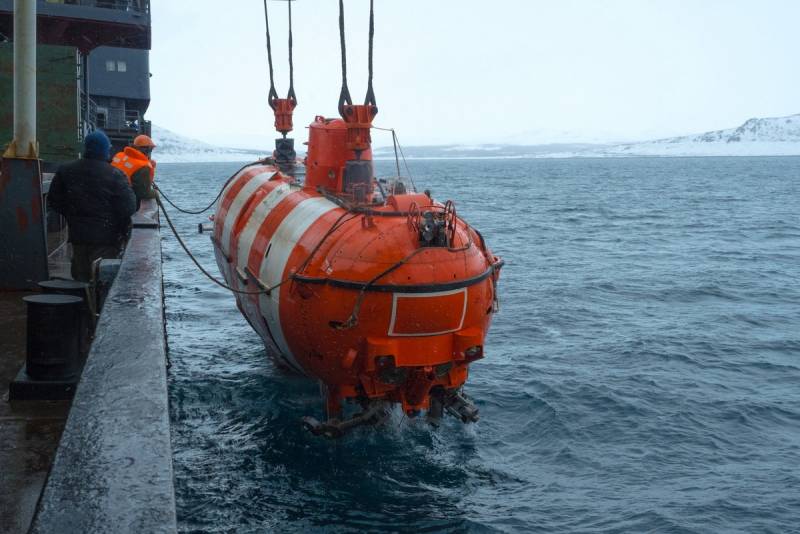 Descent of the AS-34 deep-sea vehicle from the board of the Georgy Titov vessel
To use the VSK, the personnel must carry out a short preparation procedure, after which they take places inside and undock. Due to positive buoyancy, the camera rises on its own to the surface, where you can send distress signals and make the transition to rafts or rescue vessels, as well as provide assistance to victims.

In November 2014, the Ministry of Defense showed the features of the use of VSK. The camera of the submarine K-560 "Severodvinsk" passed the tests. During this event, VSK took on board five submariners and ballast, imitating the rest of the crew. The ascent was carried out from a depth of 40 m and took approx. 10 sec. The test divers did not notice any negative phenomena.

However, the presence of the VSK does not guarantee the safety of the crew. Thus, the crew of the nuclear submarine K-141 "Kursk" during the accident could not use the camera. Submariners with K-278 "Komsomolets" were able to use the VSK, but only five people got into it. In addition, upon ascent, the pressure difference tore out the hatch, and the chamber began to draw water. One submariner was thrown out after the hatch, another was able to get out - three others, including the commander of the ship, drowned along with the VSK.

The Department of Search and Rescue Operations (UPASR of the Navy) is responsible for rendering assistance to submariners in distress. It has at its disposal a mass of rescue vessels for various purposes, as well as deep-sea vehicles and complexes. Due to the use of certain means, it is possible to evacuate the crew from a sunken boat, provide assistance to submariners on the surface, tow an emergency ship, etc. 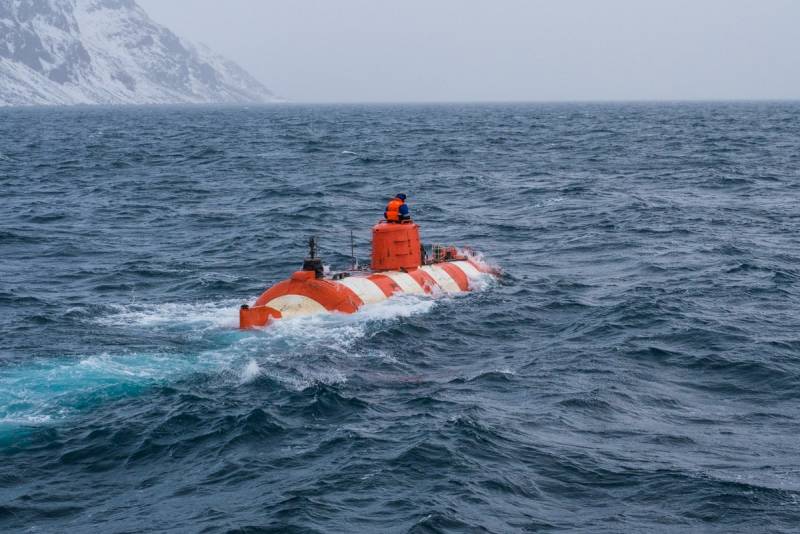 AS-34 in independent sailing
Virtually any vessel, from various boats to large specialized units, can lift victims out of the water and ensure the transition from rafts. At the same time, in recent years, special attention has been paid to the creation of specialized rescue vessels capable of providing comprehensive assistance at all stages of the operation and ensuring the operation of other rescue means.

For the evacuation of submariners from a sunken boat by "dry method", deep-sea rescue vehicles (SGA) are used. All naval fleets have at their disposal one carrier vessel with the SGA pr. 1855 Prize. The AS-26, AS-28, AS-30 and AS-34 devices are capable of diving to a depth of 1000 m, docking with the escape hatch, and take on board up to 20 people. and deliver them to the surface. Also built two newer SGA pr. 18720 "Bester" with improved characteristics and capabilities. So far, only the Northern and Pacific fleets have them.

The use of SHA can be difficult. The transfer of the carrier vessel to the accident site and preparation of the dive can take a long time. In addition, technical difficulties are possible. So, during the operation to rescue the Kursk, the Prize vehicle could not dock to the escape hatch due to its damage. 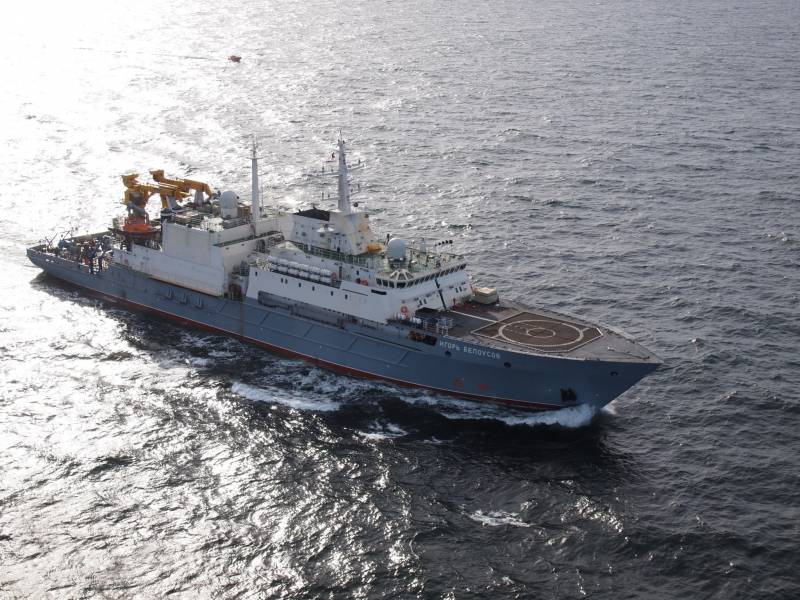 Rescue vessel "Igor Belousov"
Since 2015, the unique rescue vessel Igor Belousov, pr. 21300 Dolphin, has been serving in KTOF. He carries SGA "Bester-1" and a diving bell. A significant part of the internal volume of the vessel is occupied by the GVK-450 deep-water complex. It includes 5 pressure chambers for 120 people. With the help of its regular means, Igor Belousov can raise the crew of an emergency submarine, and then provide decompression and other medical assistance.

Unfortunately, only one vessel has been built on Project 21300 so far, which does not meet the general requirements and wishes of the Navy. The fact is that the GVK-450 complex is the result of cooperation between domestic and foreign industries. The use of imported components is no longer possible, and the development of its own analogues has not yet begun. It is not known how soon the Navy will be able to receive a new ship, project 21300.

At present, the Russian Navy has a developed complex of means for rescuing submariners from damaged ships, both on the surface and from the depth. Some systems and products have been in operation for decades, while others have appeared in recent years - however, they all solve common problems and give personnel the hope of rescue from any emergency. 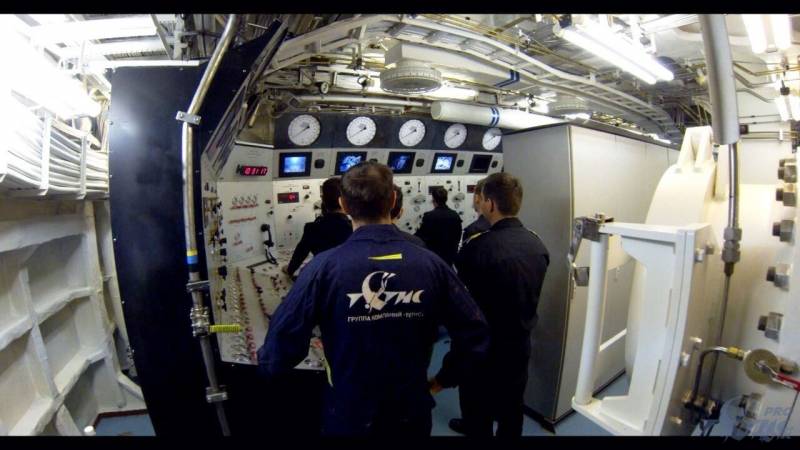 Control post of the GVK-450 complex on board "Igor Belousov"
At the same time, there are certain difficulties in the field of means of rescue. So, none of the known systems, as experience shows, does not guarantee one hundred percent rescue of people, and various unforeseen factors and circumstances can lead to unforeseen consequences. In addition, there are quantitative and qualitative problems. For example, the Igor Belousov vessel, with all its advantages, does not yet have sisterships, and their construction is postponed indefinitely.

However, the overall situation is conducive to optimism. New submarines with modern systems are being built, and their reliability is increasing, dramatically reducing the likelihood of accidents. At the same time, the rescue service receives promising products of various kinds that can provide the necessary assistance. The performance and potential of these tools are regularly tested during training events. It is hoped that everything will be limited only to exercises, and they will not have to be used in real accidents.

Ctrl Enter
Noticed oshЫbku Highlight text and press. Ctrl + Enter
We are
Undersea Warfighting. Code Submariner US Navy. Part of 1Cables and parachutes for submariners
23 comments
Information
Dear reader, to leave comments on the publication, you must to register.