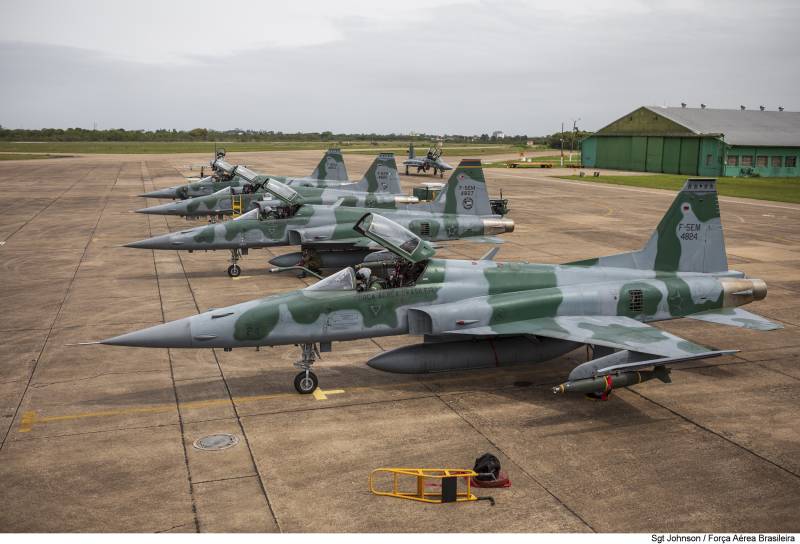 F-5EM fighters of one of the Air Force units

In the mid-seventies, the Brazilian Air Force received the first American-made Northrop F-5 fighters. In the future, new contracts took place, which made it possible to create a fairly large fleet of equipment. In recent decades, measures have been taken to modernize aircraft, thanks to which they remain in service until now and can serve in the foreseeable future.

The first contract for the purchase of Northrop F-5 aircraft for the Brazilian Air Force was signed in October 1974. It provided for the delivery of 36 single-seat F-5E Tiger II fighters and 6 two-seat F-5B Freedom Fighter combat trainers. The contract value was $ 72 million (approx. $ 365 million at current prices). The first aircraft were delivered to the customer in the spring of 1975, after which deliveries continued. For several years, three squadrons were transferred to new equipment.

In 1988, a new Brazilian-American agreement emerged. It provided for the transfer of 22 F-5E and 6 F-5F aircraft from the US Air Force. The delivery of this technology made it possible to abandon the aircraft of the old modification. So, in 1990, the remaining in service with the F-5B in the amount of 5 units. written off and transferred to museums. Newer F-5Fs took their place in the army. 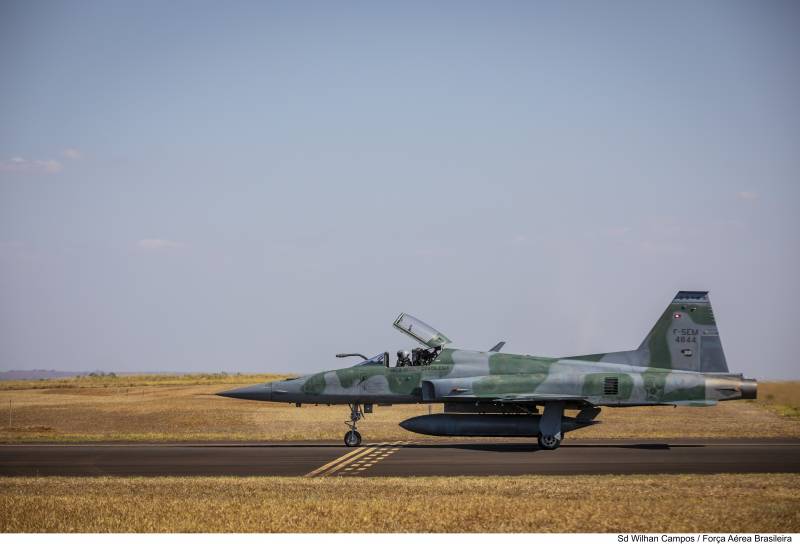 Thus, from 1974 to 2009, Brazil acquired 81 aircraft of the F-5 family. Over the years of operation, a significant part of the machines were lost or written off for various reasons. The remaining aircraft have been modernized and continue to serve. According to open data, currently in service there are 43 F-5EM aircraft and only 3 two-seat F-5FM. This technique is distributed among five squadrons.

During the first decades, the F-5B / E / F aircraft operated in basic configuration and without any modifications. By the beginning of the XNUMXs, it became clear that these fighters needed deep modernization. With its help, it was possible to extend the service life, as well as improve the fighting qualities. 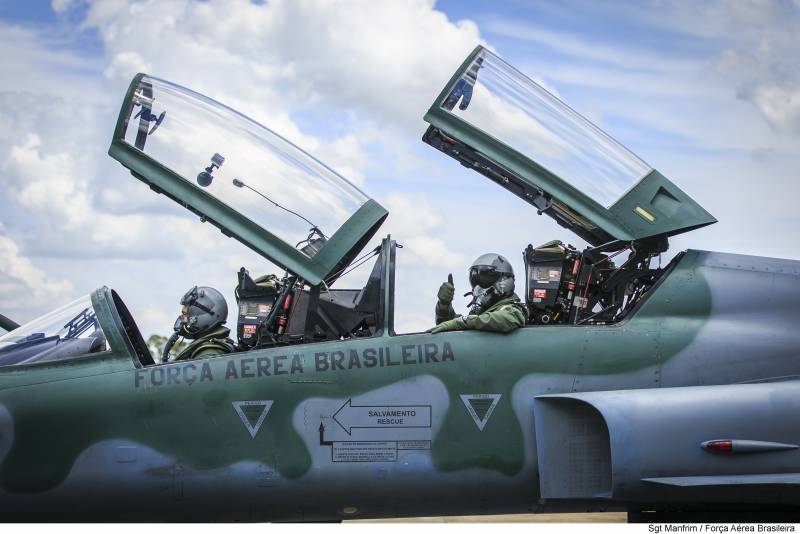 Double combat training F-5FM
The project with the working designation F-5M was launched in 2001. The developers of the modernization program were Embraer and AEL Sistemas (the Brazilian subsidiary of Israeli Elbit Systems). The design took several years, and by the end of 2004 the contractors presented the prototype F-5FM aircraft with a full set of modifications. The first modernized F-5EM appeared later, in September 2005. In the same year, contracts were signed for the modernization of 43 F-5E and 3 F-5F aircraft with a total value of $ 285 million. According to the terms of the agreements, the work was to be completed by 2007.

The aircraft were overhauled and refurbished at the Embraer plant in Gavian Peixoto. The main suppliers of equipment for the modernization were AEL Sistemas and Elbit Systems. The work ran into some difficulties, due to which the execution of the contract was delayed. Thus, by the end of 2007, only half of the existing fleet was modernized. Work on 46 F-5E / Fs continued until 2013.

During negotiations on the acquisition of fighters from Jordan, it was assumed that this technique would also be upgraded under the F-5M program. However, such work was repeatedly postponed, and the purchased aircraft were used as a source of spare parts for the repair of combat equipment. Only in the mid-tenths, it was decided to modernize several "Jordanian" F-5F. One of the main reasons for this was the loss of two training machines that had been upgraded earlier. 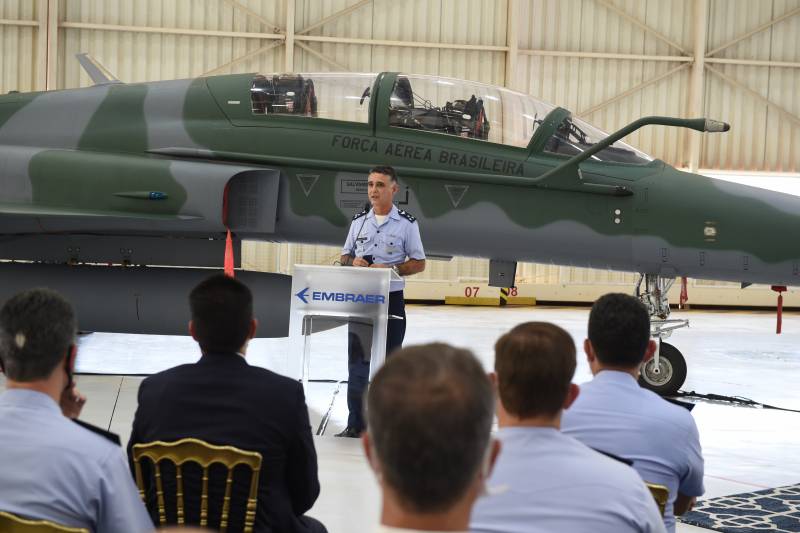 Handover ceremony for the last modernized F-5FM
On October 14, 2020, the Embraer plant hosted an official acceptance ceremony for the next - and last - F-5FM fighter. Thus, the modernization program for fighters of the F-5 family has been successfully completed. For 15 years, 49 aircraft of different modifications and different ages have been repaired and updated.

The goal of the F-5M project was to restore technical readiness, extend the service life and improve the basic characteristics of existing aircraft. Due to these measures, fighters could maintain the required combat effectiveness of the Air Force and remain in service in the future, until the appearance of completely new equipment in service.

As part of the upgrade for the F-5M project, the airframe, general aircraft systems and engines were overhauled with an extension of the service life by 15 years. In addition, various improvements were carried out, primarily related to the installation of new equipment. The aircraft received an air refueling receiver. 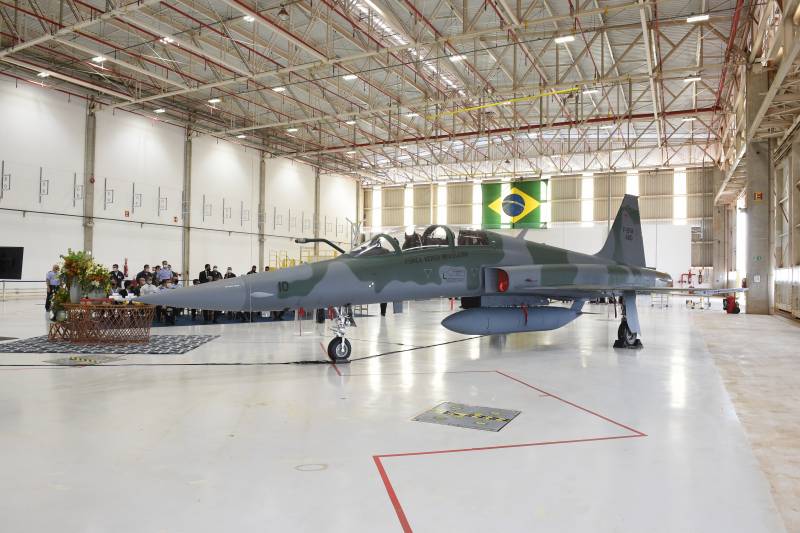 The last updated aircraft
An updated sighting and navigation system was used, the central element of which is the Leonardo Grifo F radar. This is a pulsed Doppler locator with mechanical scanning, capable of tracking several targets in the air and on the ground. The navigation system is based on inertial and satellite components. The aircraft are equipped with Embraer's communication facilities, which provide data exchange with E-99 AWACS and headquarters.

The equipment of the cabin has been completely renewed. Several liquid crystal monitors with the ability to display any information are used. A modern indicator on the windshield was used. All of these products can be used with night vision goggles. The HOTAS principle is implemented in the controls - the pilot performs all operations without removing his hands from the handles. AEL Sistemas has provided a new pilot's helmet with helmet-mounted target designation system. 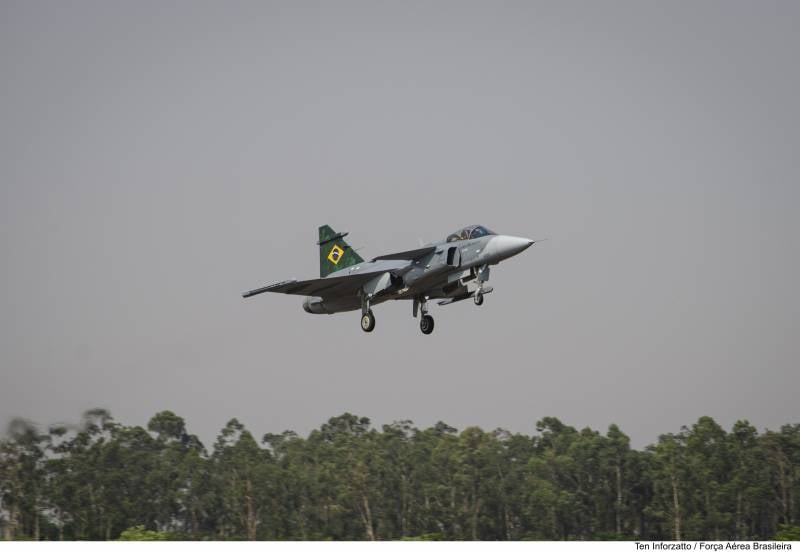 First JAS 39E delivered to the Brazilian Air Force
The upgraded aircraft retain the ability to use the weapons of the original F-5E / F. At the same time, compatibility with a number of modern designs is ensured. For close combat, Rafael Python 4/5 guided air-to-air missiles are offered; for the far - Rafael Derby. Ground targets can now be attacked using guided aerial bombs, incl. with laser guidance. Since last year, the Brazilian-developed MICLA-BR air-to-ground missile has been tested on the F-5M.

In general, we are talking about a fairly successful modernization with all the necessary capabilities. The basic performance characteristics remain the same, but the refueling system increases the possible range and duration of the flight. At the same time, navigational and combat capabilities grow exponentially in all expected conditions. Finally, the modernization of the F-5 fighters made it possible to increase the potential of the Air Force to the required level without purchasing expensive new equipment.

The modernization of the F-5M project extends the operation of the F-5E / F fighters by 15 years. The first cars were updated in 2005-2006, and the last one was handed over just the other day. This means that the oldest F-5EMs are already approaching the end of their assigned service life, and equipment that has been repaired later will be able to remain in service in the future. 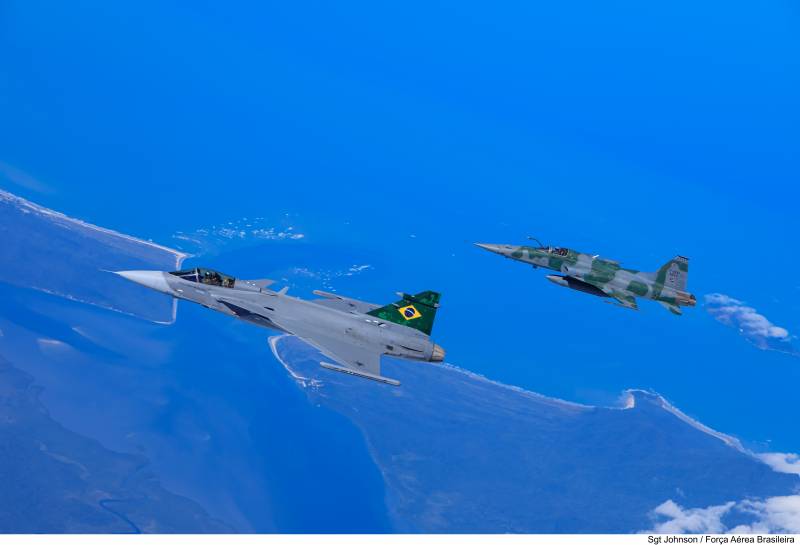 T-5M and JAS 39E / F will serve together in the coming years
Such circumstances were taken into account several years ago when planning the further development of the Air Force. Current plans provide for keeping the F-5M in service for the maximum possible time with their further replacement with modern technology.

In October 2014, Brazil and Sweden signed a $ 5,44 billion contract for the supply of 28 Saab JAS 39E Gripen E fighters and 8 two-seat JAS 39F Gripen F. The first aircraft of this order was built in the summer of 2019 and transferred to joint tests. In September 2020, the car was shipped to Brazil, and at the moment, flights are being carried out before official adoption. The official presentation of the aircraft will take place the other day. Full-scale deliveries of "Gripen" will be launched next year, and no later than 2023-24. Brazil will receive all ordered aircraft.

Receipt of 36 aircraft of Swedish and licensed assembly will allow replacing most of the fleet of modernized F-5EM / FM, at least without losses in the combat capability of the Air Force. In addition, Brazil plans to continue the purchase of JAS 39. According to calculations, for a full upgrade of the tactical aviation 108 such aircraft are needed. If new contracts are signed, then over the next 5-10 years, the Gripen E / F will replace outdated equipment and become the main combat aircraft of the Brazilian Air Force.

The successful fulfillment of the existing contract for the JAS 39 Gripen and the possible appearance of new orders for this equipment predetermine the prospects for the F-5M and some other Brazilian aircraft: over time, they will all be replaced. At the same time, it is quite possible that by the time the service ends, the oldest fighters of the F-5 family will have time to celebrate their half-century anniversary.

Ctrl Enter
Noticed oshЫbku Highlight text and press. Ctrl + Enter
We are
Aviation against tanks (part of 20)An-12 in Afghanistan
13 comments
Information
Dear reader, to leave comments on the publication, you must to register.