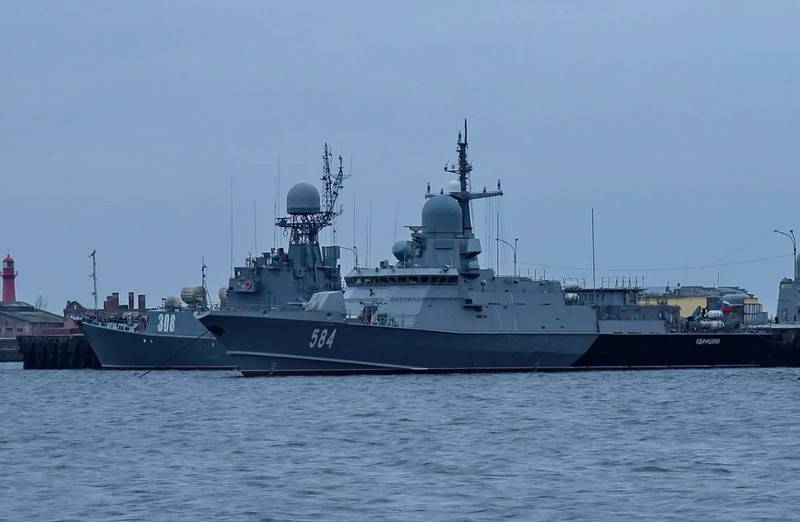 The small missile ship "Odintsovo" of project 22800 "Karakurt", which made an inter-fleet transition from the Northern Fleet to the Baltic Fleet, continued to undergo state tests before being transferred to the Navy. According to the press service of the Ministry of Defense, the crew of the MRK tested the Pantsir-M anti-aircraft missile and artillery complex installed on the ship.


MRK "Odintsovo" conducted live firing from the "Pantsir-M" complex at air targets, which were used as small-sized aircraft M-6 targets, delivered by Su-27 naval fighters aviation Of the Baltic fleet... The tests of the complex took place at one of the Baltic Fleet's offshore training grounds in the Baltic Sea.

As the press service of the Ministry of Defense said, during the implementation of practical missile and artillery firing, all the assigned targets were successfully hit.

In addition to the live firing, as part of the state tests, the ship's crew, together with the acceptance team and members of the acceptance commission, conducted maneuverable and high-speed tests of RTOs, and also checked the operation of all units, systems, weapons, navigation and radio technical aids.

The ship will be handed over to the Navy by the end of the year, the MRK will become part of the 1st Guards Division of the 36th Red Banner Order of Nakhimov, XNUMXst Class, of the missile boat brigade, which is located at the naval base in Baltiysk.

Recall that in September this year, the Odintsovo MRK, together with the Zeleny Dol MRK of Project 21631 Buyan-M and the Vasily Bykov patrol ship (corvette) of Project 22160, took part in testing weapons systems at the Northern Fleet's maritime ranges in the White Sea ...

MRK "Odintsovo" (laid down as "Shkval") is the third in the series and the second serial ship of Project 22800 Karakurt, built at the Pella shipyard in the interests of the Russian Navy. At the same time, "Odintsovo" is the first serial "Karakurt", on which the Pantsir-M anti-aircraft missile-gun complex (ZRPK) is installed. On the head MRK "Mytishchi" and the first serial "Sovetsk" air defense missile system "Pantsir-M" was not installed, they use 30-mm artillery mounts AK-630.

RTOs of this project have a length of 67 meters, a width of 11 meters and a draft of 4 meters. Displacement - about 800 tons, cruising range - up to 2500 miles, autonomy - 15 days. The main armament - one PU UKSK (universal ship complex) 3S14 RK for 8 KR "Caliber", one 76-mm gun mount AK-176MA, ZRPK Pantsir-M, two 14.5-mm or 12,7-mm machine gun MTPU.
Ctrl Enter
Noticed oshЫbku Highlight text and press. Ctrl + Enter
We are
The first "Karakurt" with ZRPK "Pantsir-M" returns to "Pella" after testingThe second serial RTO "Odintsovo" of the 22800 project will strengthen the Baltic Fleet
28 comments
Information
Dear reader, to leave comments on the publication, you must to register.