The truce continues: Azerbaijan announces another shot down of the Su-25 of the Armenian Air Force 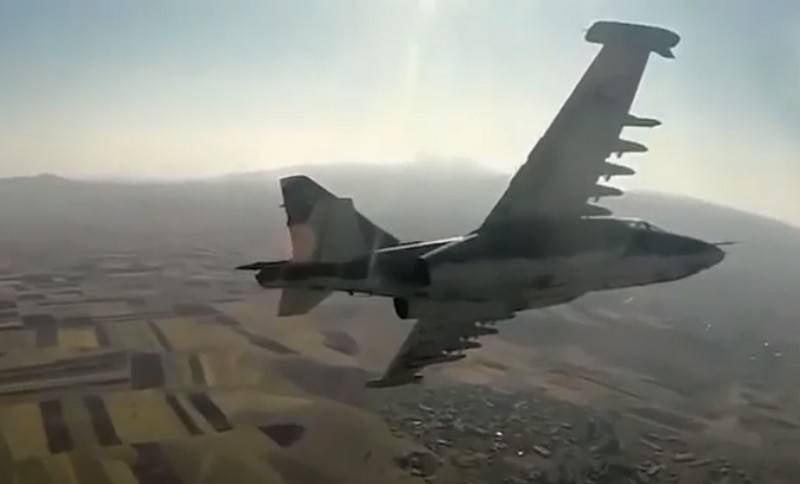 Air defense units of the Azerbaijani army on Sunday, October 18, destroyed another Su-25 attack aircraft of the Armenian Air Force. This is reported by the Ministry of Defense of Azerbaijan.

On October 18, at 12:30 (11:30 Moscow time), Azerbaijan's air defense units shot down another Su-25 attack aircraft of the Armenian Armed Forces, which tried to inflict airstrikes on the positions of the Azerbaijani army in the Jebrail direction
- it is spoken in the message of military department.

In turn, the Armenian Defense Ministry refutes this message. According to the press secretary of the military department Shushan Stepanyan, "this information does not correspond to reality."

It should be noted that for the second day in a row, Baku reports about the downed Su-25 of the Armenian Air Force in the Jebrail direction. Yesterday, October 17, the Azerbaijani Defense Ministry also reported on the downed Su-25 of Armenia, which was trying to strike at the positions of the Azerbaijani army. Baku's message was denied in Yerevan.

Earlier, Yerevan on Monday, Tuesday and Thursday reported on the downed Su-25 of the Azerbaijani Air Force over the territory of Nagorno-Karabakh. The Azerbaijani military department denied these statements, saying that all the planes are in the field of deployment.

Let us remind you that yesterday Yerevan and Baku agreed on a humanitarian truce, which entered into force at 00:00 on October 18. At the same time, the parties to the conflict have already more than once accused each other of violating the ceasefire.

As the adviser to the president of the unrecognized Nagorno-Karabakh Republic David Babayan said today, in general, the humanitarian ceasefire is being observed, but in some parts of the contact line, hostilities continue, the Azerbaijani army continues to advance. According to him, the goal of Azerbaijan is the reservoir at the Khudaferin bridges located on the border with Iran on the Araks River, which is mainly used by the Iranian side.

The enemy is trying to disable or capture this strategically important node in order to gain leverage over Iran.
- Babayan said.
Ctrl Enter
Noticed oshЫbku Highlight text and press. Ctrl + Enter
We are
Reports from Strelkov Igor Ivanovich 18-19 July 2014 of the yearThe situation in the south-east of Ukraine. Chronicle of events. 3 May
77 comments
Information
Dear reader, to leave comments on the publication, you must to register.