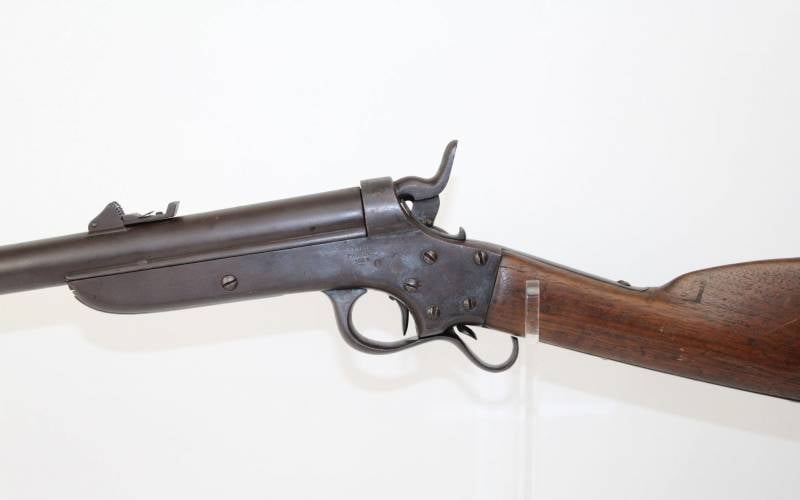 Sharps and Hankins carbine. The leather shirt has been removed. All important details are clearly visible: the bracket, the trigger in the front and the latch of the lever in the back, the trigger guard to the left of it

We leave at dawn, the wind blows from the Sahara,
Raising our song to heaven,
And only the dust under the boots, God is with us and the banner is with us,
And heavy carbine at the ready.
Rudyard Kipling

Military affairs at the turn of the eras. The beginning of this article will be unusual, but don't let it surprise anyone. I will start with gratitude to all readers of "VO", because thanks to them, having written 1400 articles for them, I learned a lot of things that I had not even suspected before. That is, Lobachevsky and Mendeleev were right when they said that teaching others, you learn yourself. And here, after all, almost every material was about something new, including for me, its author. Second thanks to those who write sensible comments, points out inaccuracies and errors. I do not mean the experts who claim that the Russian Cossacks did not have sabers with a guard and a crosshair, and the like, but I am very grateful to those who help me with information. I would especially like to thank those who suggest interesting topics for new articles: it is not so easy to find an interesting topic. Since childhood, I was very fond of the programs of Irakli Andronikov, who spoke about his searches in the field of Lermontov studies. I thought: "I wish I was so!" But the reality turned out to be more interesting ... 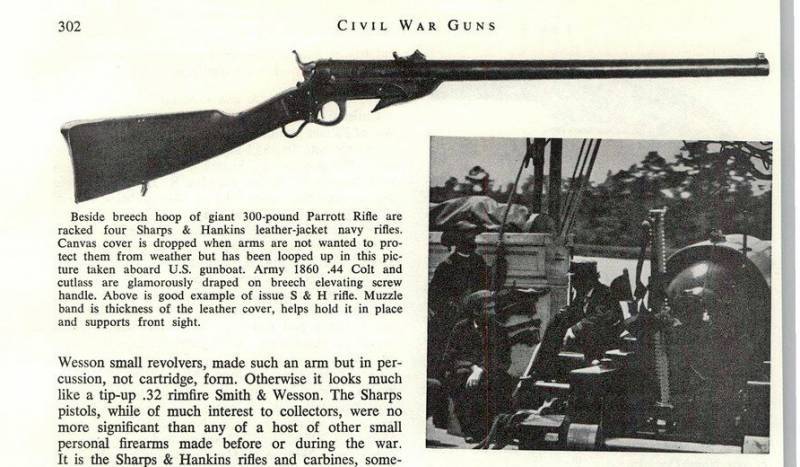 It all started with this page, sent to me by one of the readers of "VO" ...
For example, just recently I published material about carbines of northerners and southerners (the second part). And then one of the regular readers writes to me: “Where about the Parrotta carbine? Here is a page from the book, this carbine ... "The British in this case say:" Challenge accepted "-" Challenge accepted. " It's a shame: just write an article about Parrott's cannons and not know that he still, it turns out, made a carbine!

However, when I read the text from the indicated page, I was taken with a strong doubt that it was about the Parrott carbine. The fact is that "Parrott Rifle" can be translated both as "rifle" and as "Parrott's rifled gun", and, judging by the text, it was about the gun, and not about a carbine or a rifle. But there, farther below, the name of the carbine flashed - Sharps and Hankins. And with this sample I was much more fortunate. Information on it was found, and it turned out that this carbine is so interesting that it deserves a separate article. And again, under the unusual name - "leather carabiner". It is known that in the Thirty Years War there were "leather cannons", and Fenimore Cooper had such a hero - the Leather Stocking. But a leather carabiner! .. Meanwhile, the name given to this particular model of the carabiner is most suitable, although it is clear that its stock was wooden, as expected, and the barrel and mechanisms were made of steel.

Sharps and Hankins carbine. Leather "shirt" on the barrel safe and sound!
Its creator was Christian Sharps, who also worked with John Hancock Hall, the creator of the first breech-loading flintlock rifle adopted by the US Army, which has already been described in one of the articles of this series. In 1848 he managed to obtain a patent for “weapon with a sliding shutter and self-sealing ", which seemed to allow avoiding the breakthrough of gases, which was the scourge of all the then breech-loading systems.

But in this photo she is not ...
The first models of the new Sharps rifle were produced in 1849 and 1850, and the first large batch of 10000 units in 1851. But they were all designed for a standard .44 paper cartridge and were ordered from a third party. The last sample used Maynard's primer tape, for which the Robbins & Lawrence Arms Company developed a mass production technology. And also an employee of the same company, Rollin White, came up with the same bolt block that he cut off when loading the bottom of the cartridge, and in addition, automatic cocking of the hammer driven by the trigger guard. 1650 carbines of this series were made, which, as they say, "went".

Interestingly, the leading specialist in the same R&L firm was then a certain Benjamin Tyler Henry, whose name was later given to the famous bracket, and then a 15-round rifle, and also Horace Smith and Daniel Wesson. They all knew each other and knew about all the successes of each other, and about which of them was worth what.

In 1852, Sharps created the .52 cartridge (caliber 13 mm) with a linen sleeve, after which, until 1869, all samples of weapons produced by the Sharps company he founded were created exclusively for this caliber. Moreover, the benefit of such cartridges was also in the fact that they could be made from paper on their own, although the quality of factory ammunition, of course, was much higher.

Here in the company Sharps had contradictions with other partners, and he left the company he had created. So the model of 1855, which the army bought in the amount of 800 pieces, was released without it. 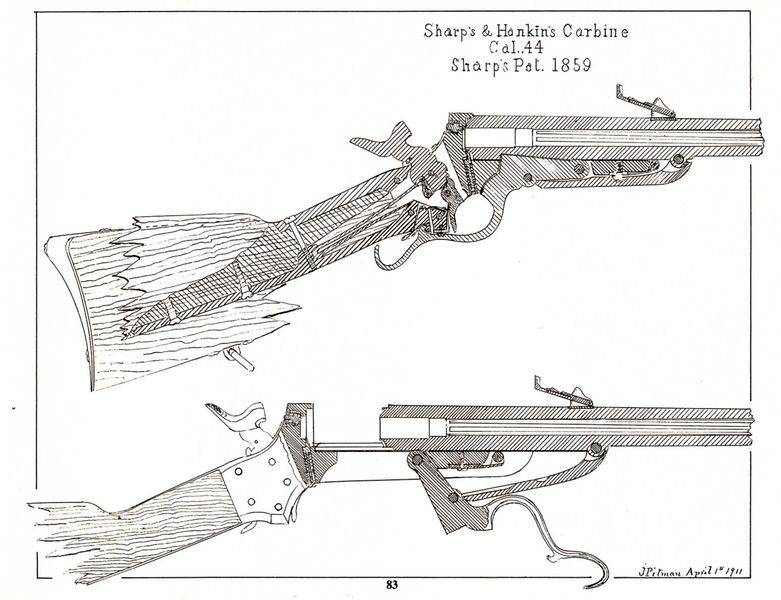 Diagram of the Sharps and Hankins carbine
And Smith and Wesson by this time were already running their own company and were engaged in the production of pistols of the Hunt-Jennings-Smith system, which fired bullets with a powder charge inside and a pallet burning when fired. The development seemed to them profitable, and they attracted shareholders, and the company was renamed the Volcanic Repeating Arms Company, which in Russian can be roughly translated as: "Volcanic Repeating Arms Company". And again, it's funny that Oliver F. Winchester, a wealthy manufacturer of mens shirts from New Haven, became its vice president, a shareholder of the company, of course, but a man who had nothing to do with weapons! 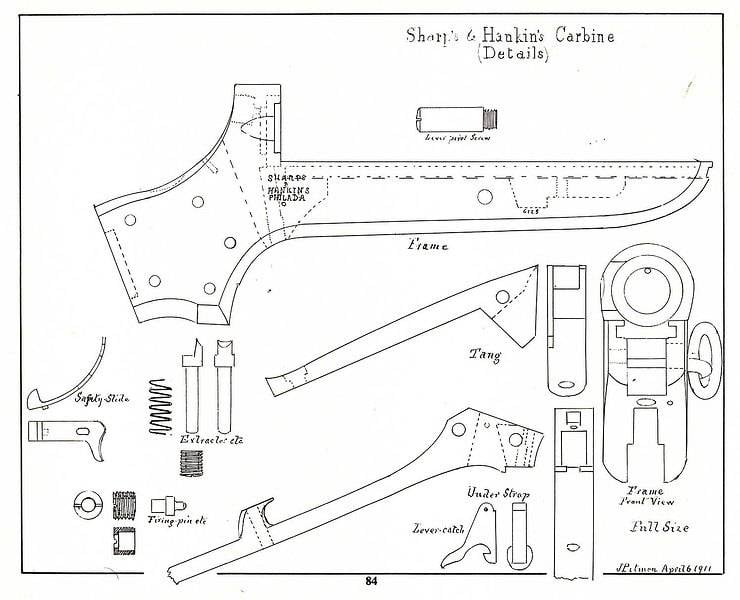 Details of the carbine: receiver and extractor with spring
Well, Sharps, which continued to exist, continued the production of weapons and, in particular, released the Sharps New Model 1859 carbine on the market, which the American cavalry adopted as its standard model. The main highlight of the design was the obturator, which prevented gases from breaking out of the barrel. It was produced in a quantity of 27000 and was produced from 1858 to 1863. 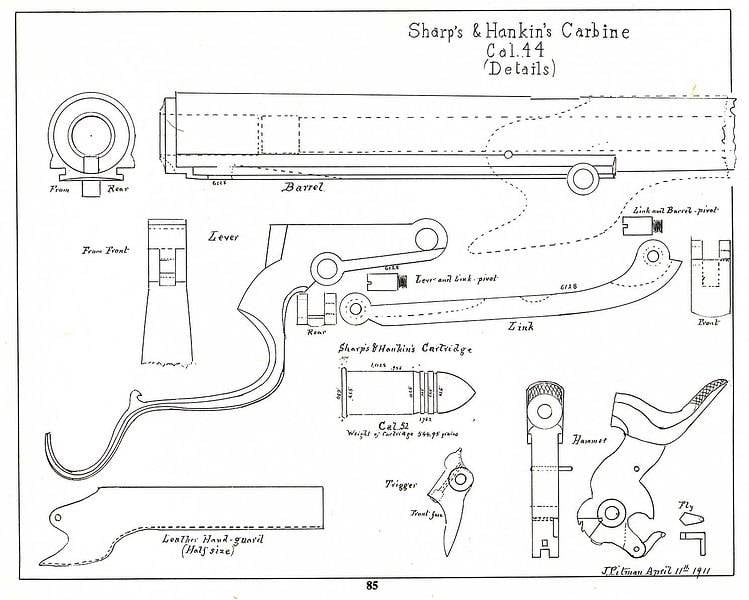 Carabiner parts, including barrel and levers, as well as trigger, cartridge and leather flap for the forward lever
But then Christopher Miner Spencer offered his own seven-shot carbine to the army, who fired rimfire cartridges and, accordingly, was faster than any other single-shot carbines of that time.

He began producing his Model 1860 carbines chambered for his own design .56-56 Spencer (14x22RF). But the army at first did not want to adopt Spencer's creation, finding it too complicated and expensive. The beginning was laid by the fleet, which ordered 700 carbines for Spencer. As you know, good people get used to it quickly and everyone talks about it. They also started talking about the Spencer carbine, so much so that orders from the warring units began to arrive for it, and many American citizens, recruiting as volunteers, bought themselves "Spencer" at their own expense. There was success, and any success in the States is a powerful stimulator of creativity. Actually, he is such everywhere, but in the States, and even more so at that time, he was especially so ...

He also stimulated Christian Sharps, who left his own company, who, in the same 1859, received a patent for an original system of loading weapons with a sliding barrel, and in 1861 he also manufactured a single-shot rifle chambered for the rimfire cartridge of his own design in .52 caliber (14x29RF ). 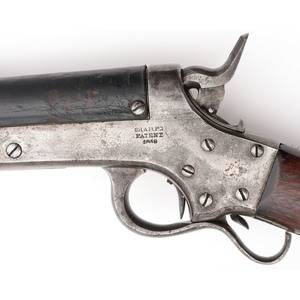 Receiver and brand
In 1862, Sharps began to work with William Hankins, in 1863 he renamed the company formerly Eddy, Sharps & Company, Sharps & Hankins, and released the Model 1861 carbine for the metal rimfire 0.52 cartridge, the so-called naval model known as Sharps & Hankins. It was this carbine that was depicted in the photo from the comment sent to me.

What is this carbine and why is it leather?

And the thing is that it was intended for fleet and had a barrel lined with patent leather right up to the front sight! Obviously, this was done to protect against corrosion, but how well such protection worked is hard to say. The carbine device was very simple, and therefore reliable and durable. Under the receiver there was a bracket, inside which, closer to the butt, there was a lever latch, and in front of it a trigger. 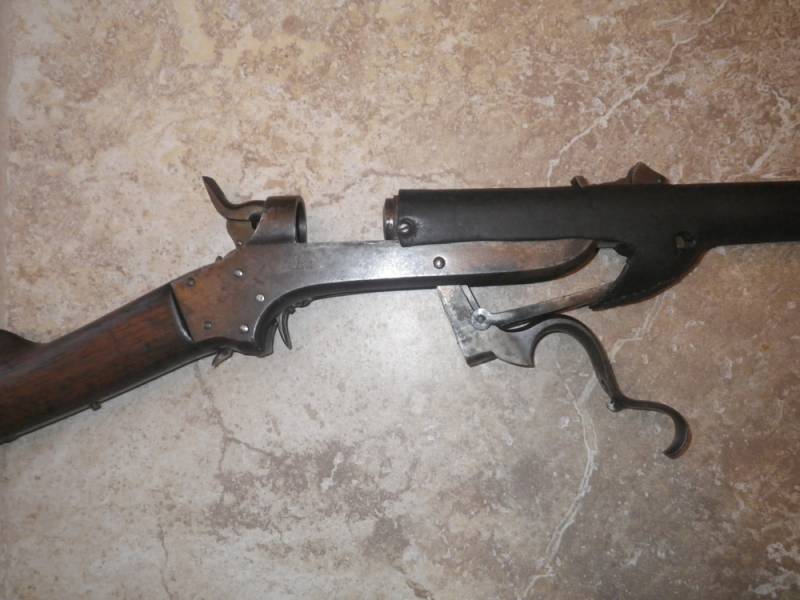 This is how the carbine looks when the reload lever is pushed back to the maximum.
The carbine worked as follows: the trigger had to be half cocked, then press the latch above the lever and move the lever down. In this case, the barrel retreated along the rails forward, and if there was a cartridge or a spent cartridge case in it, then with the extractor tooth on the bolt they were pulled out of the barrel and thrown out. Now all that remained was to insert the cartridge, return the lever to its original position (when the barrel was returned, the cartridge sat on the extractor tooth) and cock the hammer to the end.

The striker, hitting the edge of the cartridge, was not on the trigger, but inside the bolt. Next to the trigger, to the left of it is a fuse. When it moves forward, its protrusion does not allow the hammer to hit the striker and the shot does not occur.

Carabiner with leather lining and lagging leather flap
Interestingly, in front of the system, the lever covers a leather valve, which deflects up and down. Most likely, it was the most worn-out part of this carbine, or rather, the fastening of this valve to the barrel should have worn out the fastest. But how long he served, in general, is unknown. Carabiners that have retained their leather "shirt" and those from whom it has long been removed have come down to our time. The rifle scope was adjustable for 800 yards, i.e. about 720 meters.

A total of 6986 carbines of this type and 604 rifles were produced. Production lasted from September 1862 until August 1867 ... In the same year, the cooperation between the partners ended, Sharps's company was renamed again. It was now called C. Sharps & Co. However, it existed for a relatively short time. Sharps died in 1874, and his company ceased to exist in 1882. During this time, she produced 80512 carbines and 9141 rifles.

Author:
Vyacheslav Shpakovsky
Articles from this series:
The "carbine epic" continues
The carbine epic of the northerners and southerners
General Burnside's carbine: the first with a metal cartridge
People and spades
Rondash and rondachiers. From benefits to beauty
Artillery of the conqueror of Europe
Artillery innovations of the civil war between North and South
Mortars "Dictator" in the battles of the North against the South
Shuvalov's "secret howitzer"
North and South: smooth-bore and rifled guns
US Civil War ammunition
The most popular caliber of the North and South
Cannons of Tredegar and the Noble Brothers
Cannons of Brooke and Viard
James and Sawyer cannons: rifled versus smoothbore
"The parrot gun." Man and his instrument
Faceted bore gun

Ctrl Enter
Noticed oshЫbku Highlight text and press. Ctrl + Enter
We are
General Burnside's carbine: the first with a metal cartridgeWhat should be a modern sniper (part of 1)
41 comment
Information
Dear reader, to leave comments on the publication, you must to register.