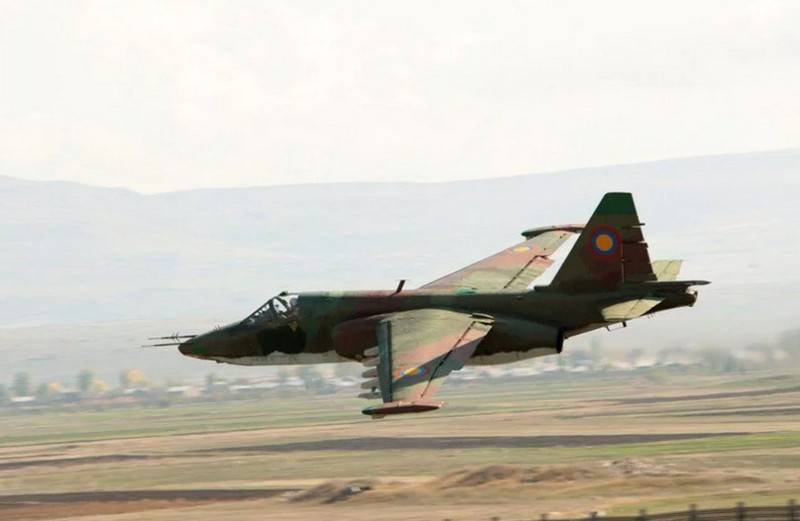 The Ministry of Defense of Azerbaijan reported on the destruction of the Su-25 attack aircraft of the Armenian Air Force by the air defense units of the Azerbaijani army. This is stated in the message of the military department of the republic.

On October 17, at 11:11 local time (10:11 Moscow time), Azerbaijani air defense units destroyed a Su-25 aircraft belonging to the Armenian Armed Forces, which tried to strike at the positions of the Azerbaijani army units in the direction of the Jebrail region
- stated in the Ministry of Defense of Azerbaijan.

Details of the destruction of the Su-25 of the Armenian Air Force are not given.

In turn, the Armenian Defense Ministry denied the statement of Baku, stating that the message does not correspond to reality and is another disinformation.

The statement of the Azerbaijani Ministry of Defense that on October 17 they allegedly shot down a Su-25 aircraft belonging to the Armenian side is another disinformation.
- Shushan Stepanyan, press secretary of the Armenian Defense Ministry, wrote on Facebook.

It should be reminded that the Armenian military department this week reported about three downed Su-25s of the Azerbaijani Air Force. In Baku, accordingly, these statements were denied, stating that all the planes are in the places of deployment.

Meanwhile, President of Azerbaijan Ilham Aliyev in his address to the nation said that the country's army took control of the city of Fizuli and seven villages in the Fizuli region of Karabakh.

The Azerbaijani army liberated the villages of Gochakhmadli, Chimen, Juvarly, Pirakhmedli, Musabeyli, Ishigli, Dedeli of the Fizuli region and the city of Fizuli
- quotes the state TV channel AzTV as saying Aliyev.
Ctrl Enter
Noticed oshЫbku Highlight text and press. Ctrl + Enter
We are
The situation in the south-east of Ukraine. Chronicle of events. 3 MayPunitive operation in Slavyansk
134 comments
Information
Dear reader, to leave comments on the publication, you must to register.