Tanks in the Karabakh conflict 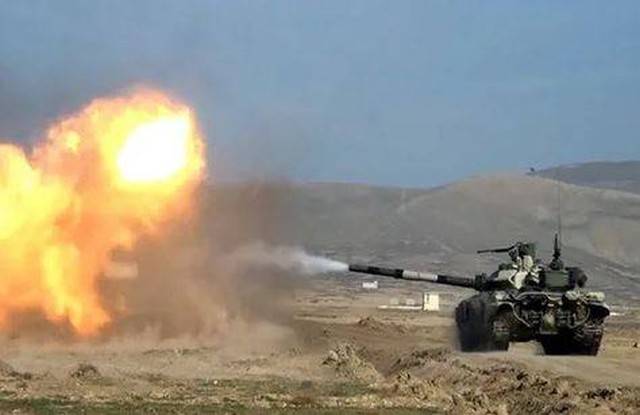 The fierce confrontation in Karabakh between the armies of Azerbaijan and Armenia leads to serious losses in armored vehicles if both sides fail to achieve their goals. Azerbaijan made a bet on the "blitzkrieg" and, with a colossal advantage in manpower and resources, was unable to quickly break through the Armenian defense and return the previously occupied territories. Armenia put on a tight defense and preventing the enemy from entering the defended territory.


The set goals were not achieved: the Azerbaijani "blitzkrieg" did not take place, the Armenian defense was not broken. At the same time, Azerbaijan has a relative success: it squeezes the Armenian side, it has to retreat. The Azerbaijani army is advancing deep into the territory, has already occupied several border villages and continues to press the Armenian army.

Parties declare destruction up to 150 tanks adversary, but how much these data correspond to reality is difficult to say. For such a limited theater of operations, the losses in tanks are really serious; if the set goals are not achieved, the cost-benefit ratio does not stand up to criticism.

On the basis of these data, the foreign expert community raises questions about the advisability of having tanks in the army as a striking force in connection with their light vulnerability from enemy fire weapons. Others believe that the reason is not tanks, but bad tactics of their use.

It is still too early to draw conclusions, the conflict is in full swing, but some negative aspects in the use of tanks are already visible. The reasons for the emerging failures of the parties may lie in different planes: the opponents lack the necessary forces and means, the peculiarities of the theater of operations, insufficient training of personnel and ill-considered tactics of using tanks in cooperation with other branches of the military. Let's see what and how the opponents are fighting and why the losses in armored vehicles are high.

Forces and means of opponents

The presence of forces among the opponents is largely determined by their economic resources and mobilization base; in Azerbaijan they are much more powerful. Its per capita GDP is almost five times higher than the Armenian one and the population is three times larger, in this regard, it can put a much larger number of its citizens under arms. Therefore, the Azerbaijani army has a number of 131 thousand people, and the Armenian - only 45 thousand.

From open sources, one can roughly judge what means the opponents have at their disposal. In almost all weapons systems, Azerbaijan is several times superior to Armenia. The Azerbaijani army has 760 tanks, and the Armenian army has only 320, in both armies, naturally, there are Soviet-Russian tanks of different years of production and different configurations.

The types of tanks show that all of them, despite the significant number, except for the T-90S, have long been outdated. Of course, six T-90S battalions are strength, but it all depends on how they will be used.

It can be seen from the above data that Azerbaijan's advantage in tanks is 2,4 times, in self-propelled guns 10 times and in MLRS 6,4 times, and this affected the conduct of hostilities. Azerbaijan was seriously preparing for a war for the liberation of previously occupied territories and unleashed it, so it created a serious advantage in tanks and heavy artillery.

The theater, small in area, is saturated with tanks, heavy artillery and multiple launch rocket systems of terrible destructive power, especially with regard to MLRS of 300 mm caliber, capable of striking targets and hitting areas deep in enemy defenses. In addition, Azerbaijan massively used drones, reconnaissance, shock and "kamikaze" made in Turkey and Israel. The most effective was the Turkish strike UAV Bayraktar TB2. The armies of both sides are also saturated with a large variety of ATGMs, which are formidable weapons against the used armored vehicles.

All used tanks, except for the T-90S, are already outdated and do not have a developed system for searching and detecting targets and their destruction, especially at night and in bad weather conditions. In the conditions of mountainous and highly rugged terrain, it is very problematic to find a target from them, and with good reconnaissance of the enemy, the organization of prepared ambushes and the use of high-precision weapons, such a tank becomes an easy prey.

Tactics of using tanks by the parties to the conflict

It should be borne in mind that the Karabakh theater of operations cannot be called an ideal place for using tanks. This is a mountainous and heavily interrupted terrain with limited transport communications, which exclude the possibility of operational maneuver of forces and means and often involves the conduct of hostilities outside the direct line of sight of the enemy. The terrain contributes to the seizure of commanding heights, the organization of ambushes and strong points with artillery and ATGMs in tank-hazardous areas.

All this presupposes a certain specificity of the conduct of hostilities and the high efficiency of using a different class of UAVs for reconnaissance, observation, target designation and adjusting fire or destroying enemy targets, which Azerbaijan successfully uses.

As follows from the messages, the main losses of tanks are from artillery fire, MLRS systems and drones at long distances even before contact with the enemy; there is no reliable information about oncoming tank battles yet. At this stage, the vulnerability of tanks to these types of weapons is visible, allowing them to be hit from above into the most weakly protected parts of the tank, as a result of which they incur significant losses. How effective is the use of anti-tank systems against tanks in this conflict, it is still difficult to say, since there is not enough information on the use of this type of weapon.

According to fragmentary information, photographs and videos from the battlefield, many questions arise about the tactics of using tanks by the Azerbaijani and Armenian sides. Azerbaijan, having a serious advantage in tanks and artillery, did not break through the enemy's defense, but chose the tactics of squeezing it out. Such tactics to a certain extent lead to success, since its military-economic potential is incomparably higher, but serious losses in tanks are difficult to explain. Opponents use tanks mainly in small groups to support the infantry and suffer losses at the same time, there is already a video of the damaged and burning T-90S. There is no large-scale use of tanks on any sector of the front, and the terrain prevents this.

Both sides suffer from imperfection in the tactics of using tanks, and the poor training of personnel is also felt. For example, in the first days of the conflict, Azerbaijani tanks suffered losses in minefields, which indicates ineffective reconnaissance and sapper preparation of the terrain in the offensive zone. Also, from the photographs and videos from the battlefield, it is clearly visible that armored vehicles are practically not masked by the parties and becomes easy prey for UAVs and MLRSs.

One of the videos shows how an Armenian tank unit is very ineptly trying to organize an offensive when interacting with the infantry. In another video, instead of hiding in the folds of the terrain, an Armenian tank reaches the crest of a hill, opens fire and immediately becomes a target and is destroyed by the enemy ATGM.

There is no reliable statistics on losses and analysis of what type of weapon the tanks were hit by, but, according to information from the battlefield, the main losses were from UAVs, artillery and MLRS. At the same time, tanks are destroyed mainly on the march, in places of deployment or concentration, and quite rarely in combat clashes.

The use of tanks in this conflict also clearly showed how much they need protection from a new and effective means of air attack - the UAV. Tanks are now practically defenseless against this type of weapon, it is expensive and hardly advisable to implement protection against UAVs on them, this is the task of special collective air defense systems. Most modern armies are aware of the existence of such threats and to neutralize them develop appropriate means of collective defense against air attacks.

It is absolutely pointless to draw conclusions about the futility of the future of tanks based on the results of this stage of the Karabakh conflict, since this is a local conflict in a specific theater of operations with serious restrictions on the use of tanks (excluding the possibility of using their characteristic combat properties), as well as with not always thought out tactics of their use and poor preparation personnel.

Ctrl Enter
Noticed oshЫbku Highlight text and press. Ctrl + Enter
We are
Is the "old" well forgotten to become the "new"? Part-2. At the call of honor and dutyHeavy tanks of the USSR in the postwar period
158 comments
Information
Dear reader, to leave comments on the publication, you must to register.