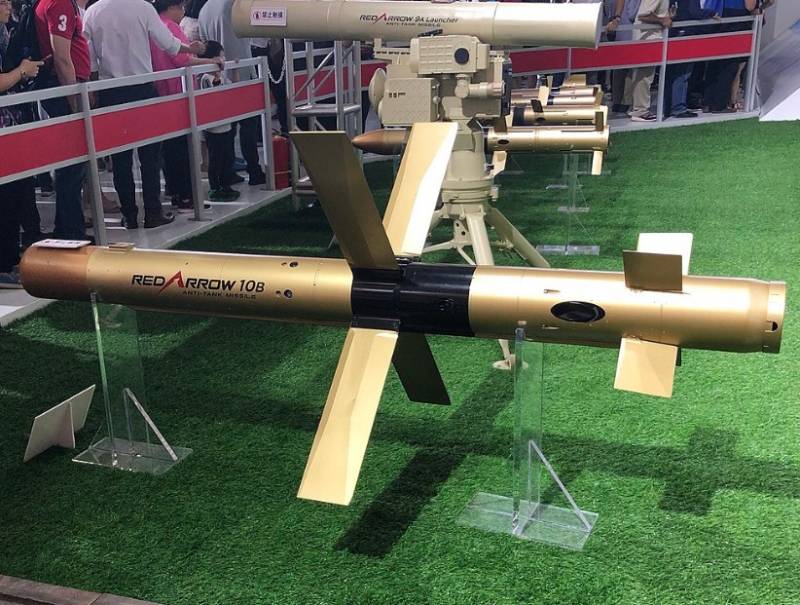 The People's Liberation Army of China conducted military exercises to storm the island territory (conditionally "Taiwan"). During the exercises, anti-tank missiles were also tested in action.

The military exercises themselves by Beijing were kept in strict secrecy, and this is no coincidence. PLA units practiced actions during the landing in Bohaiwan Bay. It is hard not to guess that the Chinese military is learning how to act correctly in the event of a war with Taiwan.

The Northern Command's missile brigade also took part in the military "Taiwan exercises". From a platform mounted on a wheeled vehicle, Chinese missilemen launched an anti-tank missile. Apparently, we are talking about a guided missile HJ-10, also known as Red Arrow-10 ("Red Arrow 10").

The missile was developed by the Chinese state defense corporation Norinco specifically to combat the armored vehicles of a potential enemy. Experts call it an analogue of the Israeli AGM-114 Hellfire complex with optical-electronic guidance. Such missiles can hit enemy equipment and fortifications at a distance of several tens of kilometers.

The main target of the missile is the American-made M1A2 Abrams main battle tank. But the point is not only in the confrontation between the two great powers, which is unlikely to reach tank battles.

As you know, Taiwan has been seeking to acquire Abrams tanks from the United States for twenty years, but Washington did not sell them for fear of deteriorating relations with China. But in 2019, amid a trade war between the United States and China, Washington gave the go-ahead for the sale of 108 of these tanks. Currently, the backbone of the tank power of the Taiwanese ground forces is the aging M60 "Patton". For this reason, Taipei is very concerned about the modernization of its tank units, especially against the backdrop of rather explicit hints from China.

Another target is Indian tanks

However, the M1 Abrams are not the only targets for the new Chinese missile. In the south, the PRC has another adversary, far more dangerous than Taiwan. We are talking about India, with which China has almost come to a full-scale war. In the event of hostilities against India, China will have to use a large number of tanks, since the Indian army still pays special attention to tanks and has several thousand combat vehicles, including 2418 T-72M1 and 1025 T-90S.

Indian ground forces deployed T-72 and T-80 in Ladakh, near the Chinese border. Apparently, the HJ-10 missile can be used against them in the event of a new conflict. This is evidenced by at least the fact that China has transferred all-terrain armored vehicles, on which a launcher can be mounted, to the border with India.

However, it is not yet known whether the new Chinese rocket will be able to withstand the extreme winter cold in the Himalayas. However, Beijing, apparently, has great confidence in the platform with the launcher, considering the possibility of using it both in an amphibious operation and in combat in the mountains.

Considering that the Indian ground forces are equipped with Russian-made or locally assembled tanks, but based on Russian technologies, the capabilities of the new Chinese missile cannot be ignored in our country.

The video shows one of the tests of the Chinese anti-tank missile HJ-10:

Ctrl Enter
Noticed oshЫbku Highlight text and press. Ctrl + Enter
We are
China presents its copies of Israeli Spike and American Javelin ATGMChina introduced a new anti-tank missile system
41 comment
Information
Dear reader, to leave comments on the publication, you must to register.