Will Aliyev give the order to storm Stepanakert: reflections on "red lines" 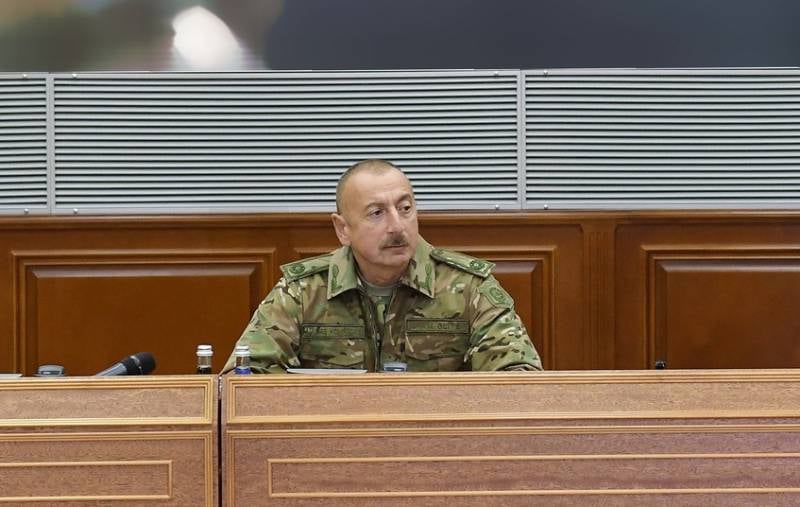 During an impromptu teleconference held the day before, during which the leaders of Armenia and Azerbaijan answered the questions of the head of the Russia Today MIA Dmitry Kiselev, they said a lot both about their own desire for a peaceful settlement of the ongoing conflict, and about the "red lines" that they will not allow opponents to cross. In fact, the main intrigue of the current moment lies in the answer to the question: does Baku intend to try to completely seize Nagorno-Karabakh or will it stop there?


As a matter of fact, a certain clarity has already been introduced here by the President of Azerbaijan himself and, accordingly, by the Supreme Commander of the local army Ilham Aliyev. In his already fairly sensational interview to the Turkish television channel NTV, he bluntly stated that Azerbaijan "will not stop this time." Baku is ready to "liberate" the entire territory of Nagorno-Karabakh, and if the Armenian army does not leave it "peacefully and voluntarily", then "the valiant Azerbaijani soldiers will continue their victorious march."

It would seem that it was said very clearly and specifically. Nevertheless, in this situation, we are dealing, on the one hand, with a purely political declaration designed for the external consumer (for our own people, however, too), and on the other, with the sounding of Baku's “great dream”. As large-scale as it is unattainable, at least now and under the present circumstances.

Yes, the Azerbaijani army managed to pretty much succeed in capturing those seven regions that played the role of a "security belt" for Nagorno-Karabakh and Armenia supporting it, surrounding and covering the territory of the unrecognized republic. The analysis of the purely military-strategic aspects of the operation carried out by Azerbaijan is not the subject of this publication, but it should be noted that the Armenian side, expecting from him the next suicidal frontal attacks, was pretty miscalculated. If there were any, then they had the character of rather a distraction.

The main goal, apparently, is precisely the capture of the "buffer zone" around Nagorno-Karabakh. If Baku succeeds in full - with the ousting of the enemy even from the Lachin and Kelbajar regions connecting Artsakh with Armenia, then the local defenders and civilians risk being in a real blockade. There is reason to believe that Aliyev and his generals are just striving for such an arrangement, which, without a doubt, will make Yerevan much more accommodating than it has been over the past three decades.

The Azerbaijani leader can broadcast to the TV camera as much as he wants about the "victorious march", but at present it is impossible to hide the true scale of the losses. Moving forward and ousting the enemy from the "security belt" has already cost a lot, both in terms of human losses and in terms of destroyed and damaged military equipment. It would be better not to even imagine what the storming of Stepanakert will cost, the defenders of which, no doubt, will fight to the death. The price of such a "military success" (even if it is achieved) can become absolutely exorbitant, turning it into a Pyrrhic victory.

Again, the approach of the zone of active hostilities to the territory of Armenia is fraught with direct intervention in the conflict by Russia, which will simply have to do this due to the obligations it has assumed under the CSTO. This is categorically unacceptable for Baku, especially since in this case it will hardly be able to count on adequate assistance from Turkey: a collision of this level is fraught with a world war, and no one will agree to such a thing. Again, today the sympathies of the European Union and the United States, whose opinion Aliyev is far from indifferent, is clearly not on his side. Without stopping in time, you can lose everything.

Based on all of the above, it can be assumed that the Azerbaijani army will try to maximize its own advancement in the regions that make up the "security belt" of Nagorno-Karabakh, but this will be done, firstly, to present its own fellow citizens with significant results of the "small victorious war" and "liberated territories", and secondly (and above all), for further "bargaining" in the process of negotiations with Armenia.

Ilham Aliyev is far from stupid and the fact that he will fill mountains with the corpses of his own soldiers seems very unlikely. Telling each and every one about the readiness for "war to the bitter end", he most likely will not give the order to storm Stepanakert.

Ctrl Enter
Noticed oshЫbku Highlight text and press. Ctrl + Enter
We are
There will be no “West vs Russia” situation in the Karabakh conflict: interview of expert Sergey MinasyanErrors of Armenia and the success of Azerbaijan ("Journal of Turkish Weekly" Turkey)
Military Reviewin Yandex News
Military Reviewin Google News
287 comments
Information
Dear reader, to leave comments on the publication, you must to register.