Watchman's syndrome or feudalism in the subway? How the St. Petersburg metro violates the rights of citizens 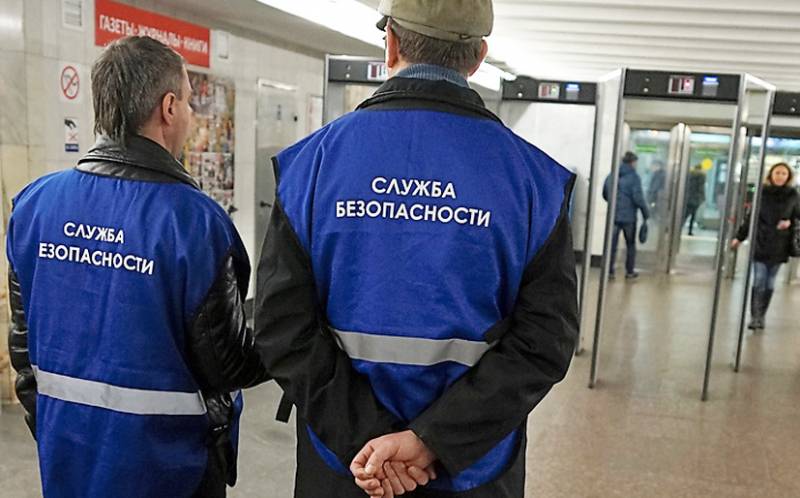 It will be about the "innovation" of the St. Petersburg metro - about the prohibition of transportation by citizens weaponswhich is legally owned by them. The situation has arisen since November 2019. Note that we are talking about legal firearms, gas canisters and similar devices that fall under the Federal Law "On Weapons", and not about criminal weapons.


State Unitary Enterprise "Petersburg Metro" took over the function of the highest bodies of state power of the Russian Federation and introduced restrictions on the rights of citizens on a separate territory of the St. Petersburg metro. I will not delve into legal subtleties, but the metro does not have such rights. Nevertheless, this fact was officially enshrined in the rules for using the St. Petersburg metro.

There is no such situation in the subways of other cities. But it’s not a fact that it won’t be (and not only in the subway, and not only with regard to weapons). Moreover, this illegal restriction is fixed on paper and backed up by real-life forceful actions on the part of the transport security service of the St. Petersburg metro. The victims of such actions appealed to the Prosecutor General's Office, Rosgvardia, the Ministry of Internal Affairs, the Ministry of Transport, and everywhere received an answer that the transportation of weapons by citizens in the metro was not prohibited. But the actual situation suggests otherwise. People are directly confronted with such arbitrariness.

On October 10, 2020, two citizens carrying a registered civilian weapon were stopped by the transport security service while passing the turnstile in the St. Petersburg metro at the Lenina Square station and were not allowed to enter the landing zone. At the same time, the transport security officers referred to the ban on the transportation of any weapons on the territory of the metro. The citizens explained that such a ban is illegal and violates their civil rights. Letters from the prosecutor's office were shown that there was no ban on the transport of weapons, it was forbidden to transport only illegal weapons. But the employee referred to the oral instructions of his superiors and the standard rules of the St. Petersburg metro. Then police officers were called, who checked the documents and said that everything was in order, the citizens had weapons on a legal basis. However, the transport security officer refuses to let them through. Then he was asked to draw up an act denying access to the metro landing zone. The metro employee refused them and said that he could only draw up an act on violation of the mask regime for them, they did not provide for other acts. Citizens had no choice but to apply to the prosecutor's office for the protection of their rights.

What's the bottom line? All law enforcement agencies unanimously say that the transportation of weapons is not prohibited, you do. But by the decree of the government of St. Petersburg dated 29.09.2020, No. 776, the "Rules for the use of the St. Petersburg metro" were approved, which directly prohibit the transport of weapons. How these rules were adopted is not clear. From a letter from the General Prosecutor's Office sent to one of the victims, it follows that the draft rules did not pass the anti-corruption expertise and that the St. Petersburg prosecutor's office issued a negative opinion on it. Nevertheless, this normative legal act acts - acts contrary to federal legislation.

Several people have raised this issue on social media. A crowdfunding campaign was launched to raise funds to file a claim. At the moment, a lawyer has already been identified who will handle this case. People intend to resolve this issue and, if necessary, reach the Supreme Court.

Is all this a manifestation of the usual "watchman's syndrome" - "forbid and not let go"? Or is it much more serious and is it a wake-up call about the changes taking place in the country? To understand this situation is the task of law enforcement agencies. 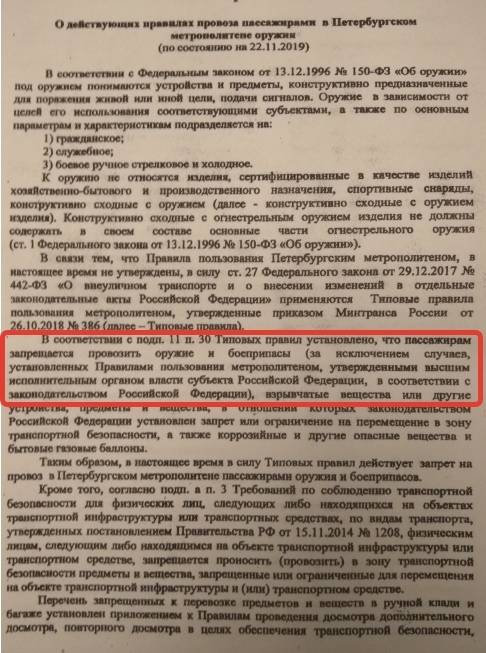 Ctrl Enter
Noticed oshЫbku Highlight text and press. Ctrl + Enter
We are
What you didn't want to know about EnglandTatarstan authorities will restore order in the republic - Sharia
Military Reviewin Yandex News
Military Reviewin Google News
238 comments
Information
Dear reader, to leave comments on the publication, you must to register.