What will be the new VKP based on the Il-96 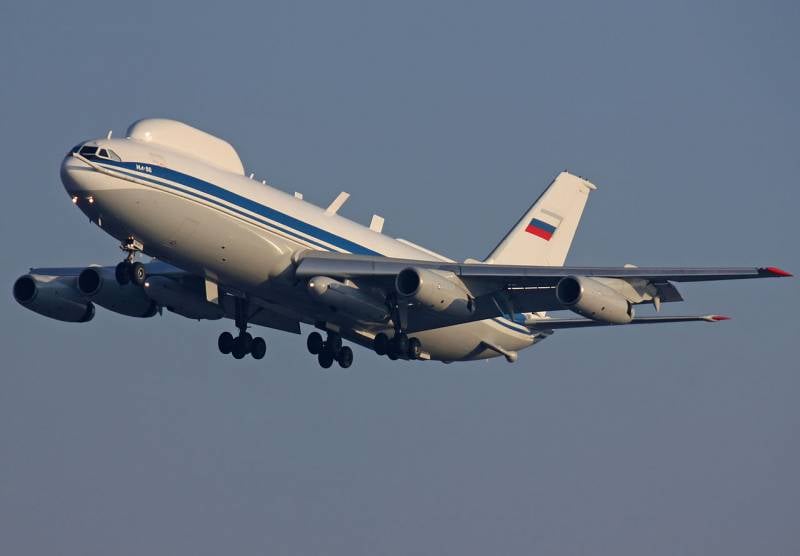 Currently, the aerospace forces are armed with four Il-80 air command posts. In the foreseeable future, a new VKP may be created to replace such aircraft. It will be performed on a modern platform with improved technical and operational characteristics.

On October 14, the TASS agency reported on the plans to develop the direction of the All-Union Communist Party, citing its sources in the aircraft industry. According to him, the air command and control posts are planned to be transferred from the Il-80 aircraft to the Il-96-400M. The timing and technical details of such a project were not specified.

The source noted that replacing the base platform will improve the characteristics and capabilities of the VKP. An increase in the duration of combat duty is expected. In addition, the command and control coverage area will increase. However, no specific figures were named.

According to open data, now the Russian Aerospace Forces has four Il-80 aircraft. VKP of this type was developed from the beginning of the eighties. The first flight took place in 1985, and in the early nineties, a promising machine was adopted. Due to the special role of the aircraft, they were limited to a small series. In 2015, at least one Il-80 was modernized with the installation of modern equipment.

The IL-80 is based on the IL-86 wide-body passenger aircraft. The airframe of the aircraft and a number of general systems have been modified in accordance with specific requirements. In particular, a protruding fairing of antenna devices appeared on the fuselage, and suspended containers with equipment were installed under the wing. In addition, two of the four aircraft received mid-air refueling devices.

The exact composition of the Il-80 onboard equipment has not yet been disclosed. It is known that such a VKP must ensure communication with all branches of the armed forces using existing control systems. There are well-developed means of energy supply, life support, etc. Measures have been taken to ensure the operation of equipment at any military and civil airfields aviation... It also provides protection against the damaging factors of a nuclear explosion. 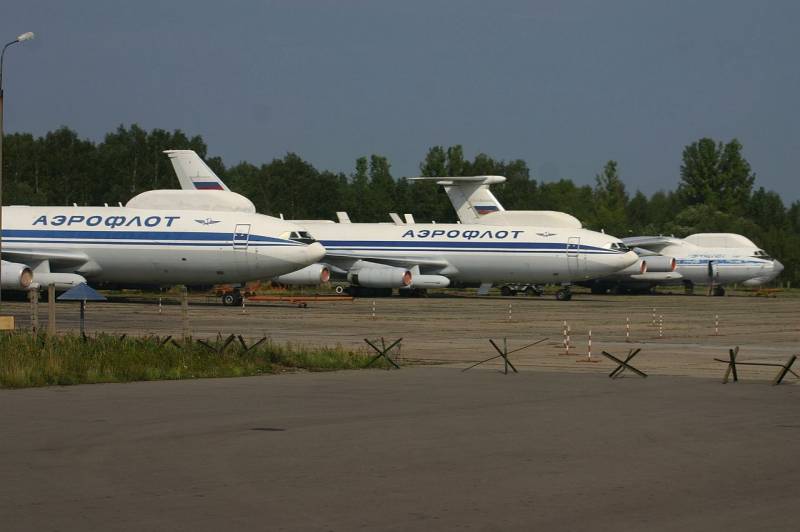 Il-80s are capable of performing the functions of a mobile headquarters and providing control of any kind of troops and formations. In the event of a full-scale conflict, such aircraft must ensure the evacuation of senior military leaders from dangerous areas while maintaining control over the armed forces.

On a new platform

Back in 2015, it became known that the United Aircraft Corporation was working on the creation of a new VKP to replace the existing Il-80. A possible designation for such a machine was given - Il-96VKP, indicating the type of base platform. It was argued that this would be the "third generation" CPSU.

Recent ones news confirm the use of the new platform, and also clarify its modification - Il-96-400M. The new version of the IL-96 airliner has a number of important differences from its predecessors and is indeed capable of giving the future VKP serious advantages over existing aircraft.

The Il-96-400M is a deeply modernized version of the serial Il-96-300. The new project provides for lengthening the fuselage by 8,6 m to 63,9 m, increasing the maximum take-off weight to 270 tons and payload to 58 tons. The airframe design is made on the basis of modern materials and provides the required ratio of strength and lightness.

The new modification of the Il-96 receives four PS-90A1 turbofan engines with a maximum thrust of up to 17400 kgf. Such a power plant provides a cruising speed of up to 850 km / h and a range with a payload of at least 8700 km. Thus, the Il-96-400M is superior to the outdated Il-86 and, accordingly, the machines based on it, in terms of basic flight performance characteristics.

How exactly the IL-96-400M will be rebuilt into a command post is not completely clear. Probably, the same modifications will be applied as in the case of the Il-80. New fairings will appear on the outer surface of the airframe for different systems and devices; portholes will be removed. Instead of the passenger compartment, radio-electronic systems and operator posts, as well as residential and utility rooms, will be placed inside the fuselage. 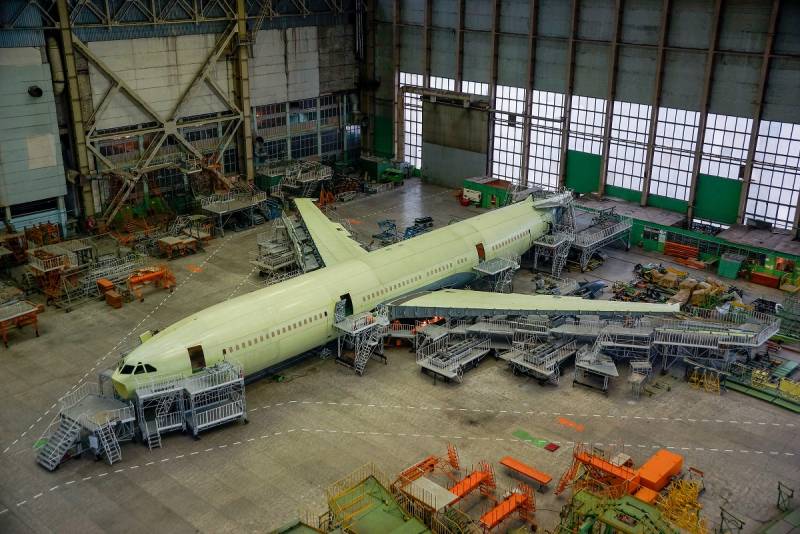 The first IL-96-400M in the assembly shop, January 2020
The VKP of the new type should retain all the capabilities and functions of its predecessor, but they should be implemented on the basis of modern components and technologies. At the same time, it is necessary to take into account the progress of recent years in the field of command and control systems and ensure compatibility with all modern means of this kind. Perhaps, the new project will use the developments on the recent modernization of the Il-80.

It should be noted that the aircraft of the Il-96 family are often criticized. The main reason for it is great age and obsolescence of the basic structure. In addition, there is a discrepancy with a number of modern trends in the development of passenger aviation. However, in the context of the prospective VKP, such claims are meaningless. Special requirements are imposed on this technique, and the Il-96-400M turns out to be almost the only domestic machine that fully corresponds to them.

The elaboration of a promising Il-96VKP project was reported almost five years ago, but the plane is still not ready. Moreover, according to the latest data, its development is still in the plans. Thus, the receipt of the finished aircraft is postponed indefinitely.

However, the developers of the VKP may not be in a hurry yet due to the lack of a ready-made serial platform. Construction of the first IL-96-400M in passenger configuration began about two years ago, and it is planned to complete the final assembly by the end of this year. The first flight is scheduled for 2021. Next year, the modernized production line will be commissioned, which will allow the serial production of new aircraft to begin.

A full-fledged series can be deployed only by 2023-25, and only if it is available, the Ministry of Defense will be able to order the construction of a number of new VKPs. The required amount of such equipment is unknown. It can be assumed that it is necessary to purchase up to 4-6 vehicles - for an equivalent replacement of the existing command posts.

With a vision for the future

Now there are four Il-80 air command posts in service, built before the mid-nineties. They have not yet developed a resource and can continue to serve, although regular repairs are required, and if possible, modernization should be carried out. However, such processes cannot go on forever. Probably in 2025-30. cash IL-80 will have to be written off due to physical and moral obsolescence.

By this time, a new VKP should be developed with all the necessary functions and improved characteristics. Preliminary work on such a project began several years ago, and work on this topic continues. Accordingly, at any time there may be new messages about the progress of work and even about the start of construction of new equipment.

Ctrl Enter
Noticed a mistake Highlight text and press. Ctrl + Enter
We are
An-12 in AfghanistanMiG-23 fighters in Afghanistan
17 comments
Information
Dear reader, to leave comments on the publication, you must to register.