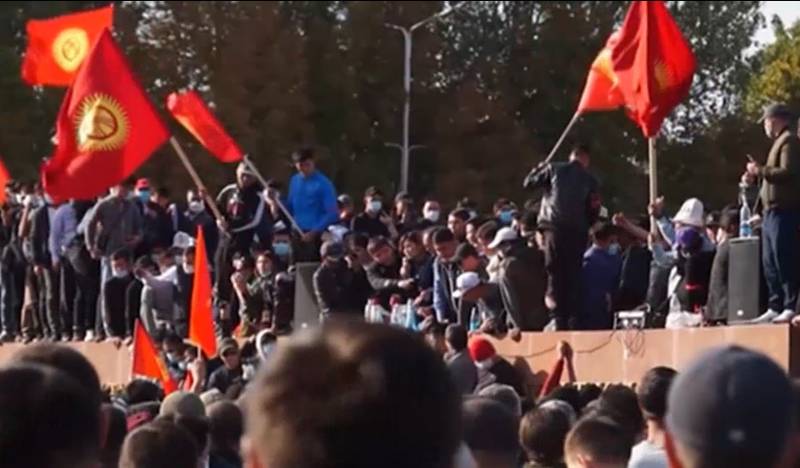 The war in the South Caucasus somehow pushed another important event for Russia from the front pages of information resources - the next revolution in Kyrgyzstan. More and more often I hear the words that everything has calmed down there, the protesters have won, and now the president and the new government are rebuilding the state administration system.


A new government has been appointed. The President controls the political situation. The security forces and the army maintain order in the capital. The protests are held in a peaceful manner and are no longer as numerous and aggressive as in the early days. Simply put, revolutionary fervor and craving for destruction pass. The leaders of the protest agreed to negotiate peacefully, without blood and armed confrontation.

If we look at what is happening in Kyrgyzstan superficially, without delving into the essence of the processes, the impression will be created that the president and the parliament of the republic managed to bring down the activity of the radicals. Moreover, their "banners" were knocked out of the protesters' hands. The basic requirements have been met. The voting results were canceled. The prime minister was a man who was released from prison by the radicals.

One circumstance spoils the beautiful picture. Rebellion never ends with a simple change of personalities in power structures. It always has a continuation. The winners take revenge on the vanquished. The terror begins. Somewhere it takes radical forms, when political opponents are physically destroyed, somewhere opponents are simply hidden in prisons and camps, thereby excluding them from the political life of the country.

Personally, I have no doubt that the protesters who forced the Central Election Commission and the parliament of Kyrgyzstan to recognize the elections as invalid, forced the president and parliament to accept their terms of the game, will not stop there. The next target will clearly be the president and the Jogorku Kenesh. The deputies and Sooronbai Jeenbekov will not be saved by the concessions they have made. It seems to me that these demands are just a matter of time.

First of all, the issue of the departure of the President of Kyrgyzstan has already been launched into society by the new Prime Minister Sadyr Zhaparov, approved by the parliament. As I understand it, there was no conversation between the president and the prime minister on this matter. Japarov simply put the question in the form of an ultimatum. If you do not quote the new head of government, but simply voice his thought, it turns out that the government gives Jeenbekov three days to voluntarily resign.

Three days and guarantees that, unlike other former presidents, he is guaranteed the status of "former president". Moreover, Jeenbekov himself declared his readiness to resign after the stabilization of the situation in the country. Translated into common language, this sounds like a proposal for an alternative: either you leave yourself and receive all the benefits due to the former president and guarantees of personal safety, or in three days you will be swept away by popular anger and it is not known how it will end for you.

“Yes, Sooronbai Jeenbekov announced that he would step down as president of the country, but we do not understand what three days Sadyr Zhaparov and his supporters are talking about ... the press service of the head of state did not indicate a specific date and day of resignation.”

There is one more fact that people in Bishkek prefer not to mention. And there are almost no reports about this in our media. Supporters of the new prime minister have a negative attitude towards Russian-speaking journalists. It is said in plain text that Russian journalists biasedly cover the events and actions of the Protestants. It is becoming unsafe to work in Bishkek.

The country is in a very difficult economic situation. The program to fight the coronavirus has practically failed. Guest workers who came from Russia simply have nowhere to work and earn money. And the Kyrgyz want to “save the picture”. At least the semblance of the fact that the next riot is just a "private affair" of the Kirghiz. And journalists are very bad helpers in this matter.

Probably, there is a rational grain in this. Considering that the "popular revolt" is not so disinterested. Ordinary bandit raids, robbery, theft and looting are covered with beautiful slogans about freedom and happiness for the people. At the beginning of the events, I wrote about the Jerooy gold deposit owned by a Russian company. Events there are developing just according to the scenario of the usual bandit raid. According to the head of the International Business Council Askar Sydykov, as a result of the riots and raids of looters, the enterprise suffered damage in the amount of $ 20 million (1 billion 545 million rubles).

It's not over yet

The calm prevailing in the information space regarding the events in Bishkek is deceptive. The silence that reigns today in the Kyrgyz capital is based on the presence of a huge number of security officials and the Kyrgyz army. The reasons that caused popular unrest in the past are not eliminated. I will say more: the new Kyrgyz government, like the previous ones, is withdrawing itself from solving economic and social problems, international and ethnic issues.

I have counted the number of popular unrest, riots, protests that shook the land of Kyrgyzstan in the 21st century. According to my calculations, the last excitement - "anniversary", tenth. A sort of gloomy anniversary of the struggle for the chimera of the power of the people. In order not to be unfounded, I will give a list of worries. Perhaps I am missing something.

17.03.2002/XNUMX/XNUMX: Aksy events. Shooting of a demonstration in the village of Bospiek, Aksy District, Jalal-Abad Region.

January 8.01.2005, XNUMX. Pickets in front of the parliament building in support of the candidate Roza Otunbayeva and against the candidate, the daughter of President Akaev, Bermet Akaeva.

4-5.03.2005. Protests in Osh and Jalal-Abad against the results of parliamentary elections.

10.04.2014/XNUMX/XNUMX. Protests against the sale of Kyrgyz airports to Russia. Demanding the resignation of President Atambayev.

7-8.08.2019. The storming of the residence of the former President Atambayev and his arrest.

5-6.10.2020. Protests against the results of the parliamentary elections. Declaration of elections invalid, resignation of the government.

The statehood of Kyrgyzstan is still at the stage of formation, or rather, the search for an acceptable form of government. That is why the events taking place now are not the last.

Ctrl Enter
Noticed oshЫbku Highlight text and press. Ctrl + Enter
We are
Situational analysis of the death of the MH17 flight (Malaysian Boeing 777), made on the basis of engineering analysis from 15.08.2014Results of the week. “In our cooperative, the board is always agreed”
43 comments
Information
Dear reader, to leave comments on the publication, you must to register.