Historical question: do we need a fleet?

August 11 2012
40
Since the time when Peter the Great issued a decree on construction fleet, the same question sounds: why do we need it and is it needed at all? At one time, the questioning voices were almost completely abated, while at others they gained new strength. In the last twenty years, after the collapse of the Soviet Union, the “choir” of doubters has reached perhaps the largest size in the whole history domestic navy. How can you not ask yourself the question: why do we need a fleet?

First you should read the history of the issue. The first doubters were the very bearded and uneducated boyars. Due to the revolutionary novelty of the reforms of Peter the Great, they simply did not have time to change their outlook accordingly. In addition to this, Tsar Peter mercilessly harassed some centuries-old foundations incompatible with modernity. The boyars and other dignitaries, accustomed to the established order, hardly joined the new policy and, as a result, they perceived quite harshly various innovations. One of these victims of perception difficulties was the fleet. We must pay tribute to Peter I and his associates - by joint efforts they convinced the highest circles of the country of the need to build a navy, a merchant and a military. 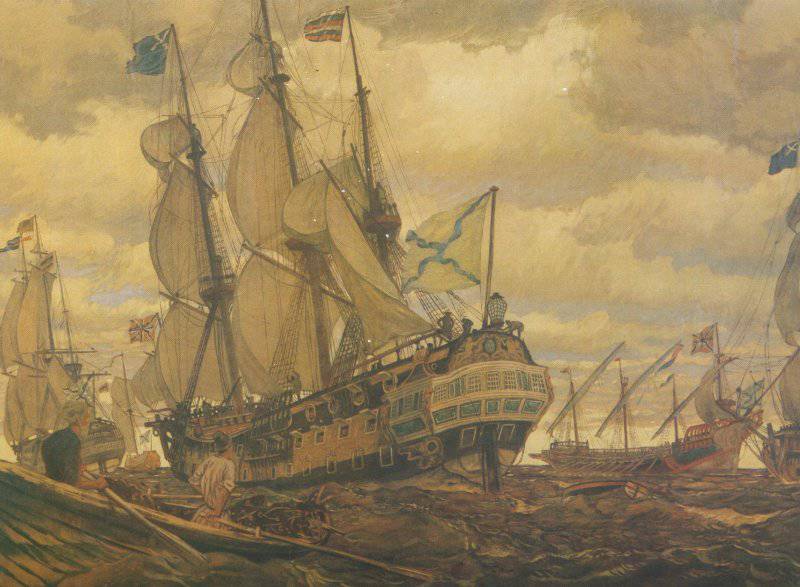 HER. Lancere. Fleet of Peter the Great

The next historical character on which it is worth dwelling while studying the past of our question is Count Alexander Romanovich Vorontsov. Shortly after the assassination of Paul I and the accession of Alexander I, Vorontsov was appointed head of the Navy Education Committee. Such a decision of Emperor Alexander can hardly be called correct, and here's why. Count Romantsov, as well as his brother Semyon Romanovich, was an ardent opponent of the powerful navy. In his official speeches he repeatedly mentioned the uselessness of this kind of troops:
For many reasons, both physical and local, Russia cannot be among the preeminent maritime powers, but neither need nor good is foreseen

In the course of the reforms under the authority of the Committee, the navy was reduced in several years, and all its tactical tasks were reduced to the protection of the waters of the Black and Baltic Seas. Despite the gradual increase in funding, the fleet ceased to make long trips.

Not only the position of A. Vorontsov, but also some facts from his brother’s biography are often cited as the reasons for such changes in the life of the fleet. Semen Romanovich Vorontsov was an Englishman, which affected his judgments, including on the defense of his country. Sometimes there is an opinion stating that the British through S.A. Vorontsov influenced his brother. As proof of this, respect is given that the British showed to Semyon Alexandrovich during his embassy, ​​as well as the reluctance of Great Britain to have a strong competitor on the seas.

We have to admit that the new policy regarding the fleet, pursued by Alexander I and his officials, did not put an end to the naval part of the domestic armed forces. Yes, long hikes stopped, but the sailors had to make war and at a relatively short distance from their native shores. As an example of this, the Dardanelles and Athos battles of 1807, when the Russian squadron under the command of Vice-Admiral D.N. Senyavina with a difference of a month twice broke Turkish. The scale and political consequences of these battles can be compared with the Mediterranean campaign of F.F. Ushakov at the end of the previous century. In addition, Senyavin’s not too distant march forced the Ottoman Empire to sign a truce and start rebuilding its navy — after two battles, its combat capability dropped significantly. 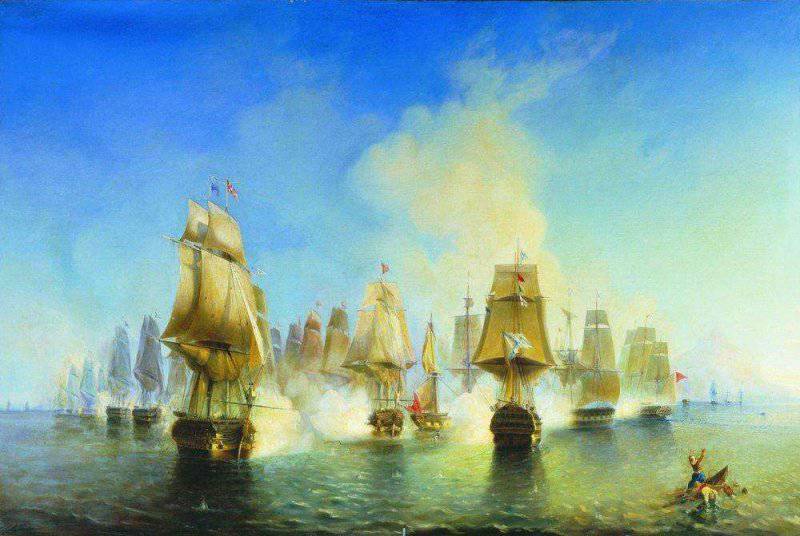 The last major surge of "activity" on the theme of the need for the fleet dates back to our time. After the collapse of the USSR, questions about the need for a fleet, as well as military aviation, strategic missile forces and other branches of our armed forces, began to rise especially often. In most cases, the rhetoric was the same. Firstly, it was argued (and sometimes it is still claimed) that the Cold War was over and we no longer need to conflict with someone and prepare for war. The second argument was the notorious balance of guns and oil - cutting military spending was the only way to save the economy. As it turned out later, the country was left without guns, and without oil. Nevertheless, hotheads who criticized the fleet did not stop improving their discussion skills and promoting clearly anti-navy proposals.

As you know, the best and most important proof of something is the experience that confirms it. What can our navy say "in its defense"? The Russian fleet began to prove its importance and necessity in the 1714 year, when it won the battle at Cape Gangut. Thanks to this victory over the Swedes, Russia gained access to the Baltic Sea. Later on, during the Northern War, the Russian fleet gained several more victories. With our victory in the last major naval battle of the Northern War - under Grengam - one of the elements of the marine form is connected. It is precisely the victory at Grengam that is symbolized by one of the stripes on the sailors' collar.

At the end of the Northern War, several relatively calm decades began, during which the Russian fleet continued to be built and developed. In an updated form, he participated in all the Russian-Turkish wars, marching for domination in the Black Sea. Soon after Russia established itself on its shores, the Black Sea Fleet was founded. It was the Black Sea sailors under the command of F.F. At the very end of the 18th century, Ushakov won a number of victories in the Ionian and Mediterranean seas.

Nineteenth century can not be called fully successful for the Russian fleet. The same applies to the beginning of the twentieth century. The victory in the Battle of Sinop and the heroic defense of Sevastopol, as it turned out, only alienated the sad end of the Crimean War, and the heroism of the sailors of the Pacific and Baltic fleets did not help to win the Russian-Japanese war. The First World War was a bit more successful - Russian sailors with varying success carried out operations to destroy enemy ships and disrupt cargo transportation. At the same time, the power of the German fleet did not allow Russian sailors to be particularly active in the Baltic. A bit more successfully fought the Black Sea Fleet, which in the first few months of the war managed to establish control over the whole sea, where its bases were located. Ultimately, the difficult economic and social situation in the country weakened all the armed forces and led to the October Revolution, after which our country withdrew from the First World War.

By the beginning of the Great Patriotic War, the Soviet Union was able not only to restore the former power of the military fleet, but also to significantly increase it. The feats of Soviet sailors during the Great Patriotic War are widely known. As for the effectiveness of their combat work, it can be assessed by the numerical results of attacks and operations. During the war years, the Black Sea, Baltic, and Northern fleets of the USSR destroyed over five hundred enemy warships, at least 1200 transport and auxiliary vessels, as well as about 2000-2500 enemy aircraft. In addition, the Northern Fleet provided 76 escorts for convoys with military cargoes, in which almost a thousand and a half transport ships and more than a thousand escort ships took part. There were considerable losses. It should not be forgotten that without the participation of the Navy the ground forces would have been in an even more difficult situation, unable to receive cargo by sea, both from the allies and from Siberia and the Far East. 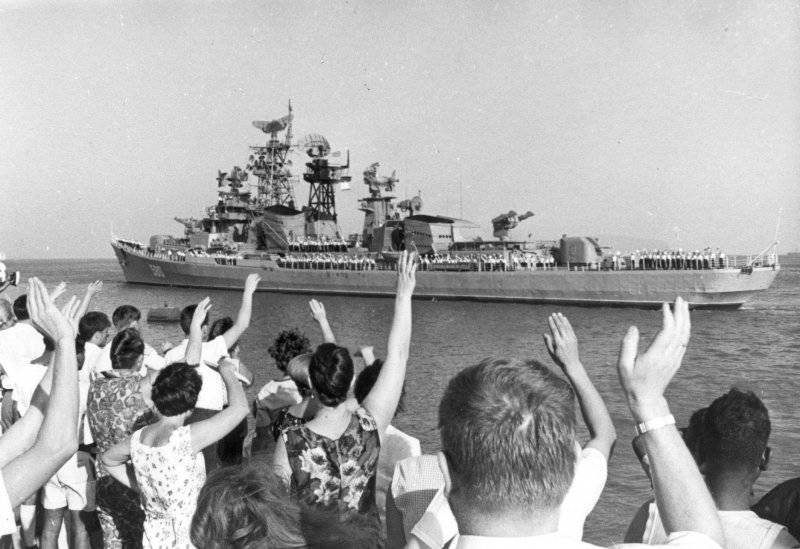 In recent decades, the Soviet Navy and Russia have not participated in major military conflicts. However, a peaceful life is not without characteristic incidents. Thus, in recent years, long hikes of Russian ships have become frequent. Almost every such campaign is accompanied by a specific reaction of foreign countries. Their officials are trying to keep within the bounds of decency, but some foreign citizens sometimes get hysterical. It is curious that in previous years, when all domestic ships and submarines were constantly at berths, foreign “partners” were not nervous and even to some extent rejoiced.

What can such a reaction of foreign gentlemen say? First of all, the fact that on a global scale the navy experienced a number of fundamental changes in the structure and equipment of armies, but, as before, remained one of the most important shock and defensive forces. Moreover, a number of recent military conflicts began with the fact that strike groups of the fleet came to the area of ​​future military operations. Based on these theses, it is possible to draw a completely logical and viable conclusion regarding the cause of a specific foreign reaction to the voyages of Russian ships. The gradual strengthening of our fleet simply acts on the nerves of some states that do not want to see a strong competitor.

What should Russia do in this case? The answer is obvious: to continue the implementation of the programs started. Such a large country definitely needs a powerful and modern fleet, and the entire history of the Russian Navy is a direct confirmation of this. As for a foreign reaction, this is not the thing that should be paid special attention and taken into account when drawing up and implementing its plans. Flaming speeches of officials and ordinary foreign citizens speak only about their attitude to Russian intentions, but no more. Much more important is the creation of a clear and concrete program for the development of the navy. To do this, it is necessary to analyze the existing state of affairs in the world and its specific regions, to create an approximate image of the world in the near future and, with such information, to develop the image of a promising military fleet. For example, for actions in the coastal zone and the immediate protection of maritime boundaries, either rocket / artillery boats or small-displacement guards are needed. For actions at a large distance from the base, in turn, ships of other classes are required. Geographical features of the Russian territory and intentions to renew its presence in a number of remote regions transparently hint at the fact that the fleet should include all types of ships, from light boats to heavy missile cruisers with a nuclear power plant.

Until the end of the current 2012, the Russian Navy will receive at least ten new warships. Approximately the same is now in various stages of construction. Obviously, the country's leadership has a unanimous opinion on the question “Do we need a fleet?”. And this opinion entailed a number of other questions of a more specific nature, concerning the necessary number of new ships, their types, aids, etc. A considerable part of the public agrees with this opinion. But why, with such a huge combat experience and an extensive list of victories, is the need for a fleet still in doubt? 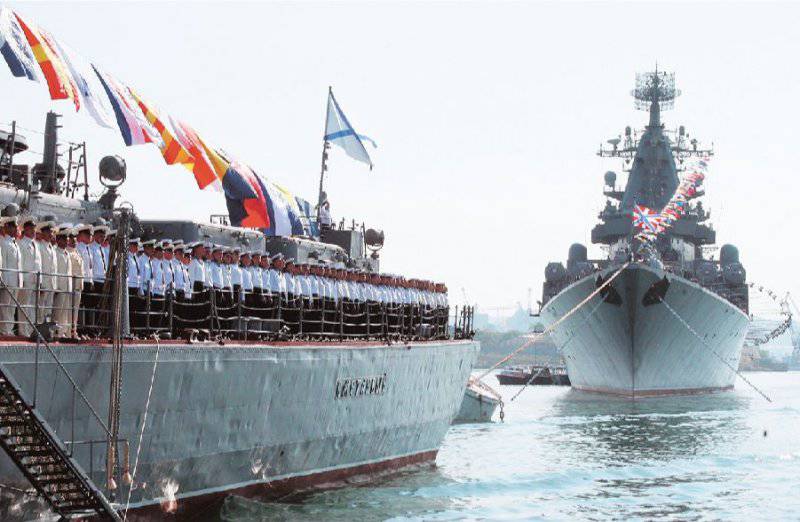