Reforms of the Russian military-industrial complex in the 90s: conversion or sabotage? 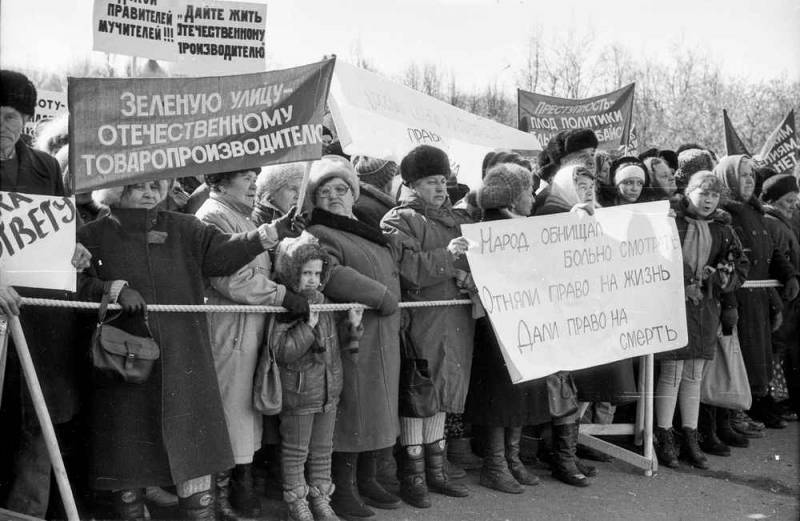 One of the most erroneous, moreover, criminal decisions of the perestroika reformers of the 90s was the so-called conversion of the domestic military-industrial complex, which essentially resulted in its ruin and destruction, which almost ended in a complete collapse of the defense industry. At the same time, it should be understood that the point here was not in itself the idea of ​​producing civilian products at military enterprises, but in exactly how ugly and perverted way they tried to implement it in our country.


I remember that Mikhail Gorbachev was very offended by the words Vladimir Putin once said about “the inadmissibility of the production of pans at rocket factories,” and he immediately began to prove that nothing of the kind actually happened. He argued that the attempt "to forge swords into plowshares", begun by him in the USSR and "creatively developed" by the followers of "perestroika" already in Russia, "did not cause any damage to the country's defense." Moreover, it also "fully met the needs of citizens in an era of scarcity." Let's leave aside the moment that the mentioned deficit was created by Mikhail Sergeevich and his team. Let's try to find out how much truth is in the rest of his words.

Let's face it - a little. Practically none at all. Is it possible to consider the decline in military-industrial complex production from 1992 to 1996 by almost 78% as “no damage to defense capability”? And the complete collapse of entire clusters of promising armory programs - for example, the development and production of air-to-air missiles, electronic warfare systems and others? Sawing (in the most literal sense of the word - for scrap) unfinished tanks, combat aircraft and ships? Leaving two and a half million specialists from the states of defense plants, design bureaus and research institutes over the course of several years? The questions seem to be rhetorical. But this is only half the trouble.

By 1997, the corporation of half of the Russian military-industrial complex enterprises, their exit from state control, the transfer of 30% of military enterprises to private hands and the "entry" of many of them by foreign representatives who were able to take full advantage of the opportunities provided to master technologies and production secrets, with which they could not even dream not so long ago - is it a "conversion" or is it the purest sabotage? The purposeful destruction of the military-industrial complex almost threw not only the domestic armed forces, but the entire country into the "stone age".

Now, in fact, about the pans. As well as pots, meat grinders and other cheap consumer goods, the release of which at military factories has forever become a part of national folklore. Yes, we did! However, not at all because the directors of the respective enterprises were complete idiots or pests. There were very serious and specific reasons for this. To begin with, the production of not just civilian products, but consumer goods was carried out by enterprises of the Soviet military-industrial complex even before Gorbachev and his guardsmen came to power.

Few people now know and remember this, but it was in this area by the end of the 80s that up to 2 thousand different products were produced, which had no military, but purely economic or even, as they said then, “cultural and household purpose”. And here it was just not about primitive frying pans. Almost 100% of radios, 95% of refrigerators, 69% of vacuum cleaners, 66% of washing machines and so on came out of the shops of enterprises every year.

In addition, it also produced computers worth 5 billion rubles, equipment for light industry enterprises - more than 3 billion rubles. Full-weight, mind you, still quite Soviet rubles. You can also recall the popularly loved Izhevsk motorcycles, cameras of the Leningrad LOMO and Kiev "Arsenal" and much more. It would seem that in the conditions of conversion for all these manufacturers, downright heavenly times should have come. It was not so ...

The drop in the output of civilian products of the military-industrial complex (by 71%) was not much behind the decrease in the production of traditional and basic military products by 88%. Why is this so? Yes, because with their insane foreign trade liberalization, the then reformers opened a wide road to the domestic market for imported consumer goods, which, to be honest, was, as a rule, better than domestic samples, and most importantly - several times cheaper. Especially - imported smuggled or semi-legally. Our industry could not withstand such competition.

The fact that any civilian products manufactured at the enterprises of the military-industrial complex were significantly more expensive than their civilian counterparts also played a role. How much? I will give just one specific example: a pump for pumping raw grain with a capacity of 2500 liters per hour, produced at an ordinary plant, cost 180 rubles, and the same unit in the "military" version - already 3 and a half thousand rubles. And the point here was not at all in "greed" - the enterprises of the military-industrial complex used (and are still using) much more expensive equipment, materials, semi-finished products and everything else. And people work there, whose work is paid somewhat at different rates than in civilian life. Hence the difference.

In the end, the directors of military factories, from which the "higher authorities" with a knife at their throats demanded the release of "conversion products", and the remnants of the labor collective - at least some kind of salary, had no choice but to rivet the most miserable examples of consumer goods that could be released the consumer at least is not at a loss. Lucky only those who quickly and successfully found new "niches", having managed to master the production of something really worthwhile, such as equipment for construction or oil production. The rest could only hope for good luck, because the law on conversion adopted in 1992 was nothing more than a set of general phrases and good wishes, but nothing was said about how military enterprises should survive in reality.

Fortunately, completely destroying the most powerful military-industrial complex created during the Soviet Union was not within the power of the entire pack of then reformers. He survived them, however, with great losses for himself, the consequences of which he has to overcome and make up for in the current years. The calls for a “new conversion” that are periodically heard from the lips of the country's “top officials” may well be justified. But in no case can you repeat the mistakes of those years, which were discussed above.

Ctrl Enter
Noticed oshЫbku Highlight text and press. Ctrl + Enter
We are
About Stalin and KhrushchevWhat you didn't want to know about England
33 comments
Information
Dear reader, to leave comments on the publication, you must to register.