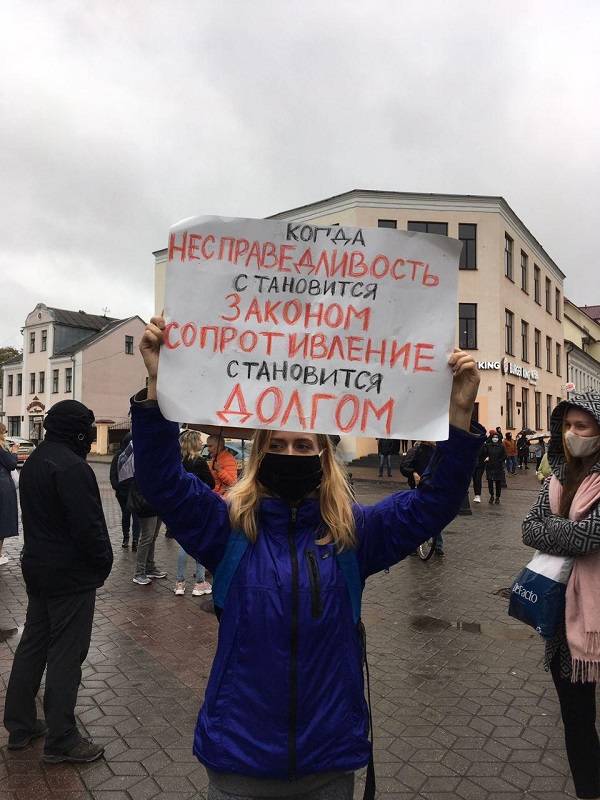 They laugh easily, they have lively eyes.
They are defenseless, they like to live.
And they are all together, and it has always been so.
They are the last to remember what light is.
Egor Letov. We are ice under the feet of the major

The protest movement continues for the third month in Belarus. And, obviously, the protest will continue no matter what.

You can talk and write a lot about the fact that "the hand of the West is at work" there, even we had many "experts" who amused (although this is laughter through tears) tales of Poland's evil plans to attack Belarus and squeeze Grodno, but ... It is difficult to prove external funding. Unlike Ukraine, where everyone knew the rates and no one really hid it.

Either in Belarus everything is done taking into account the Ukrainian sloppiness, and information about bribery simply does not leak (believe it?) To the side, or the protest really comes from the heart.

After two months, only one thing can be said: the protest movement has not been suppressed. It has not developed into a Ukrainian-style Maidan and most likely will not grow, because it plays into the hands of some forces. Therefore, most likely, we will never see barricades, destroyed and looted shops. The wrong people, obviously.

But August 9 was a kind of starting point. It was hoped that this was just a point, but the past days have shown that yes, there can be no return to the past. Approximately as in Ukraine, but (glory to the Belarusians) without blood. Almost without blood. 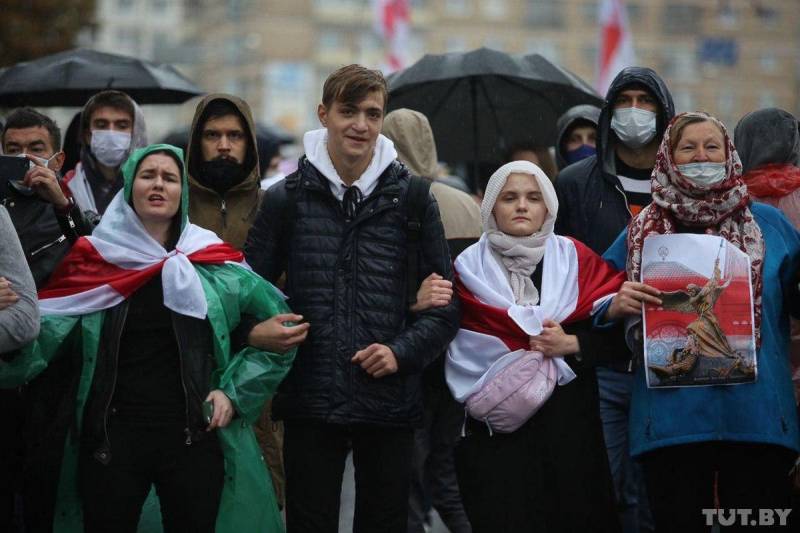 Photo by: TUT.BY
Those who do not want to see the mass character and diversity of the composition of the protesters will not. But on the whole, the protest actions have confirmed that various segments of the population are participating in the movement against Lukashenka. It is difficult to judge how real they are all engaged. Only one thing is clear: the lower on the social ladder, the more support for the protest. And this is perfectly normal, because those at the top of the food chain do not need protest.

Media reports began to appear that demonstrations were either slowing down (one point of view), or vice versa, becoming fewer, but more severe. Hinting, as it were, that here he is, the "Maidan" in the flesh. From among the engaged and paid marginals.

However, many believe that the incessant protests, which could not stop the outright atrocities and overshoots of the police system, just confirm that Lukashenka really lost his legitimacy, "slightly" outplaying the elections.

Both versions have the right to life.

But the very attitude of Lukashenka to popular demonstrations is another proof for the second. All the peremptory statements and stigma that he generously threw in the direction of the protesters, without the slightest attempt to listen and agree. Either you are "for" - or a traitor paid for by the West.

In general, it is normal and justified for a dictatorship or a totalitarian state. Another question is how much the West will appreciate it, with which Alexander Grigorievich has been flirting so zealously for the last couple of years?

The West will not evaluate it unambiguously. There is a triumph of democracy, albeit in a rather perverted form. And precisely because this is a perverted democracy, Lukashenka shines political isolation from the very Europe, with which he was so eager to be friends.

It is clear that full-fledged isolation will not happen, Russia, naturally, will not abandon “her own” in trouble. However, there are also nuances here.

Russia's support for Belarus, more precisely, Putin's support for Lukashenko is a reality. This is a completely normal reality, no matter how you look at it, but ...

How “solvent” Lukashenka is today as a politician? Doubts arise in spite of the fact that the siloviki are openly fierce, and "order has not been restored." Despite the tear gas, batons, boots and rubber bullets used to treat Belarusians. And not only Belarusians. 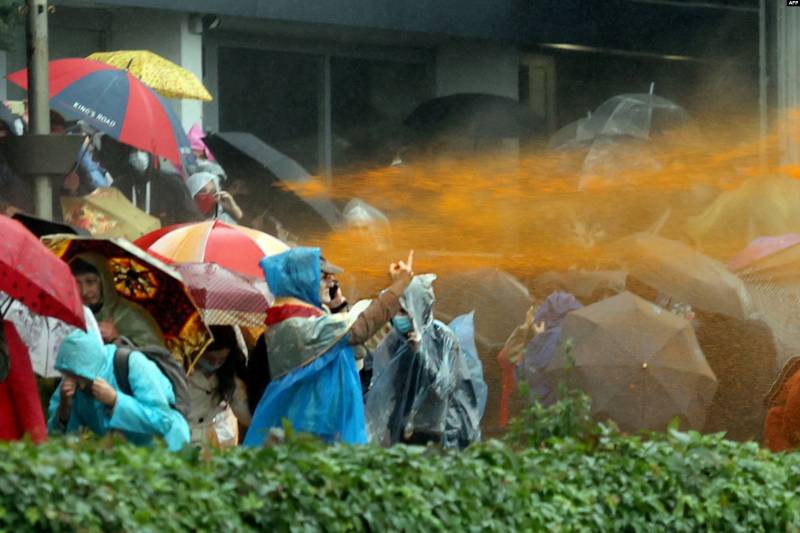 Photo: Radio Liberty - Belarus
But the protest continues unabated. No matter what.

Meanwhile, the Belarusian civil society deserves the highest praise as acting exclusively in the legal field.

Moreover, it should be borne in mind that the first three days after the elections, when the society, to put it mildly, was surprised beyond measure by the results, it still did not suit the indignation according to the Ukrainian scenario.

And it was the Ministry of Internal Affairs of the Republic of Belarus that provoked further indignation, trying, according to orders, to suppress the protest actions with the utmost severity. But, in fact, it is the actions of the Ministry of Internal Affairs that do not let the protests subside. The resistance continues simply because the security forces are pouring gasoline into this fire. 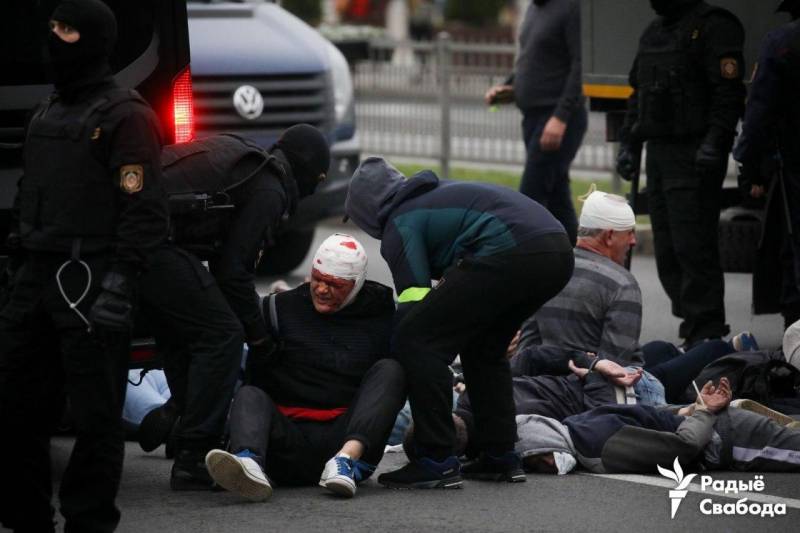 Photo: Radio Liberty - Belarus
In Belarus today, to be beaten, you just need to go out and go or go about your business. You can do it, but the main thing is not to be seen by the security forces. Sorry, reminds some of the moments of the Belarusian stories, but today no Ausweiss will help. Proven by Russian TASS correspondents.

The beatings backfired, but even in this case, Lukashenko decided that the best way to defend himself was to attack. But then everyone really started to resent. Even the church.

Then there was a certain lull, which can hardly be called an assessment of the situation. The parties assessed each other's capabilities, after which the Belarusian authorities launched a decisive offensive.

It’s a strange moment: the intensity of the protests really began to gradually decrease, but for some reason Lukashenka arranged this meeting in the pre-trial detention center. Based on the rather vague explanations of the official channels, he wanted to talk about the changes to the constitution ... with the arrested oppositionists!

An interesting version. Legal "sharaga" in a pre-trial detention center is more than original. But there is another version, which speaks of Lukashenka's attempt to bargain with Babariko and Tikhanovsky. 4,5 hours of "dialogue" within the walls of the pre-trial detention center is a lot. For a president of the country who can afford to spend so much time on potential prisoners, this is a strong move.

But these actions only shook people up. And again the authorities threw gasoline into the fire. Well, let's not judge.

But here it becomes clear how low the level of trust in any actions of Lukashenka is.

Belarus today is facing not just a crisis, but a long and protracted political crisis. Classic, when the people do not want to live in the old way, and the authorities cannot rule in a new way.

Since the beginning of the protests, on August 9, the police have detained about 14 thousand people. 3 people were killed, 79 were missing, 3 of the missing were found dead. The number of people beaten by the police and security forces is estimated in the thousands. It is impossible to find exact figures, the opposition may exaggerate, the official channels, quite naturally, are trying with all their might to shield themselves.

A power scenario is a dictatorship. And the world does not like dictatorships today. Reducing their number, let's say, by the entire world community with rare exceptions.

Putin expressed support for Lukashenka. CSTO, "we are not abandoning our own", loans and so on. And here an analogy question arises.

Don't we think that all this is very similar to Ukraine and Viktor Yanukovych?

Yes, many will say: there is a difference. Yanukovych could have suppressed the "Maidan" in the bud, and nothing would have happened in Ukraine. Maybe.

As a result, in Ukraine we have a simplified regime concentration camp, where outspoken Nazis act as guards, persecuting dissidents.

In the case of Belarus, everything is the same, only the role of the Ukrainian Nazis is played by security officials, judges and state officials.

Mr. Lukashenko now rests solely on Putin's promise to help and on the bayonets of the forcefully coaxed security officials. The siloviki will continue to beat and maim ordinary citizens, because in the event of Lukashenka's fall, they will be torn apart. 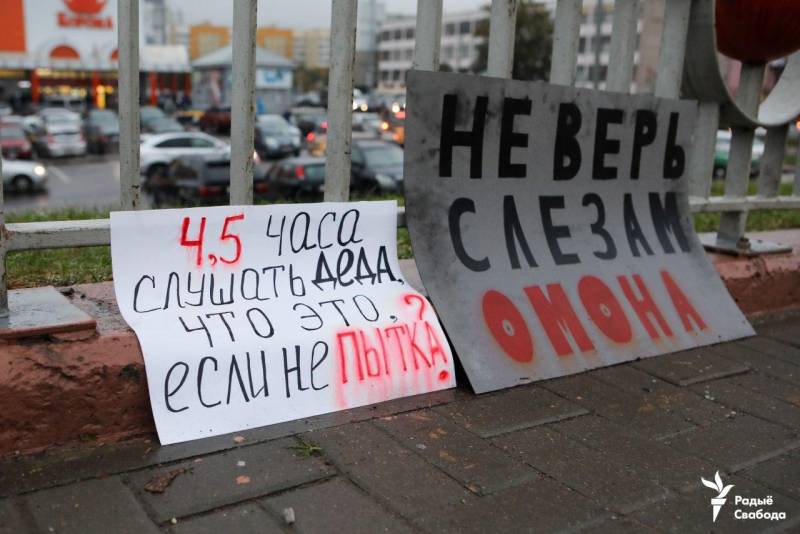 Photo: Radio Liberty - Belarus
More than one billion dollars were poured into Yanukovych. And where are these billions? The situation is about the same with Lukashenka. Will Russia's money save him or will it be like that of a Ukrainian colleague? .. It's a matter of time.

In any case, Lukashenka's position is not the strongest, and therefore Putin should very clearly calculate every move, investing in Lukashenka. Otherwise, it can really come out like Yanukovych. I wouldn't want to.

After all, the situation is really similar: both Yanukovych and Lukashenka really "got" almost the entire population of their countries. And history is a very harmful thing, there are enough repetitions.

I am specifically speaking about the promises of Putin, not Russia. These are different sides of the coin. But the situation is really stalemate: the Belarusian authorities are trying to use force, not trying to establish a dialogue, just suppress all the speeches. The protesters, despite the fact that their leaders were imprisoned, and the rest (Tikhanovskaya, for example) do not demonstrate either independence or a clear position, they are demonstrating their readiness to continue protest actions. 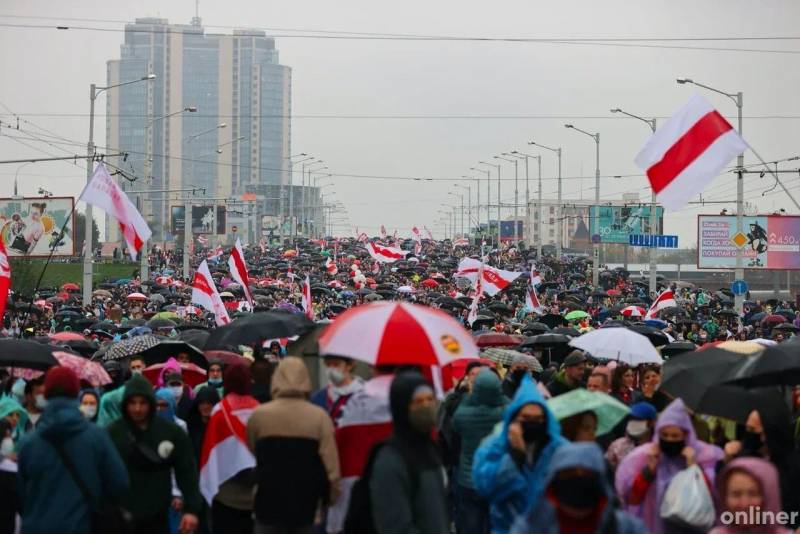 Photo: Vlad Borisevich / Onliner
Fight for attrition. Despite the fact that Lukashenka has removed from the political scene all competitors, some abroad, some in jail, he will hardly be able to remove the last obstacle. Simply because they are a large part of the people.

Therefore, one should not even think that the Belarusians will give up and surrender. On the contrary, as practice shows, another political blunder of Lukashenka only causes another surge of unrest and demonstrations. If the problem was only in the recount of votes, then, quite possibly, everything would have happened as in Russia with the constitution - they made some noise and dispersed.

But the problem of Belarus is much deeper, there is not just a conflict between the “upper and lower classes”, there is a complete unwillingness of the authorities to enter into dialogue with the people, and vice versa, a pronounced desire to live according to the model and likeness of the past.

But the world is changing, it has changed in this case, completely oblivious to the unwillingness of the Belarusian authorities to change with it.

It was not for nothing that I put lines from the famous song of our Yegor Letov at the beginning. They are prophetic in many ways. And the unwillingness of the Belarusians to live in the old way can really become ice under Mr. Lukashenka's patent boots.

Ctrl Enter
Noticed oshЫbku Highlight text and press. Ctrl + Enter
We are
Situational analysis of the death of the MH17 flight (Malaysian Boeing 777), made on the basis of engineering analysis from 15.08.2014Results of the week. "God forbid to see Russian revolt, senseless and merciless!"
Military Reviewin Yandex News
Military Reviewin Google News
663 comments
Information
Dear reader, to leave comments on the publication, you must to register.