The perfect storm in the Aleutian Islands. Operation Cottage 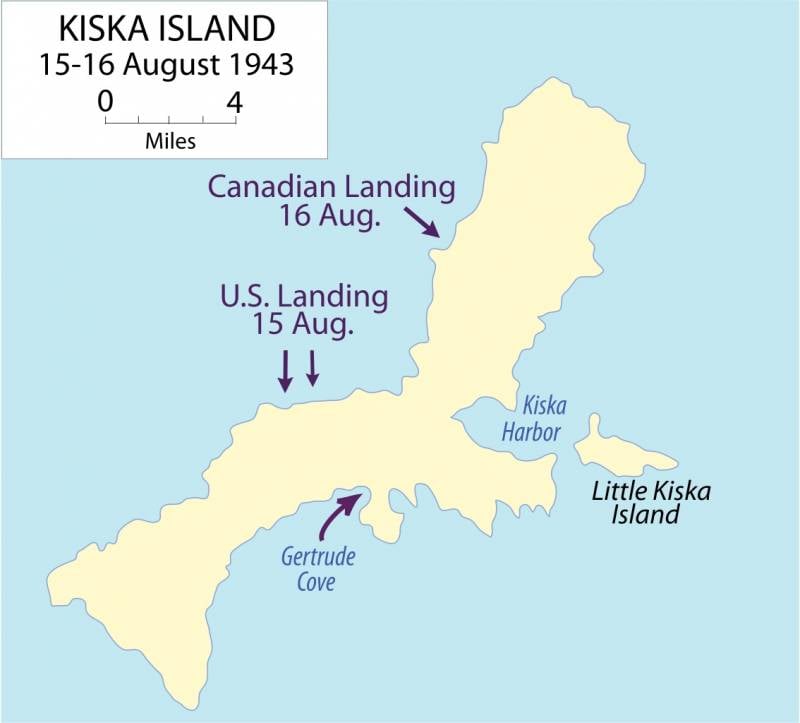 Kiska Island and the direction of the landing. Graphics Wikimedia Commons

Operation Cottage, carried out by the US armed forces in August 1943, became widely known. Its purpose was to liberate Fr. Kiska (Aleutian Islands) from the Japanese invaders. By the time the American troops landed, the enemy had been evacuated from the island, but the advancing troops still suffered losses. Let's try to understand the reasons for this situation.

In early June 1942, the Japanese fleet landed troops on the Attu and Kiska islands. The capture of the islands took place practically without interference, although there was a small battle for the American weather station on Kisk. Having occupied the islands, the Japanese began military construction, and after a few weeks, full-fledged trench systems, underground structures, a port, etc. appeared. 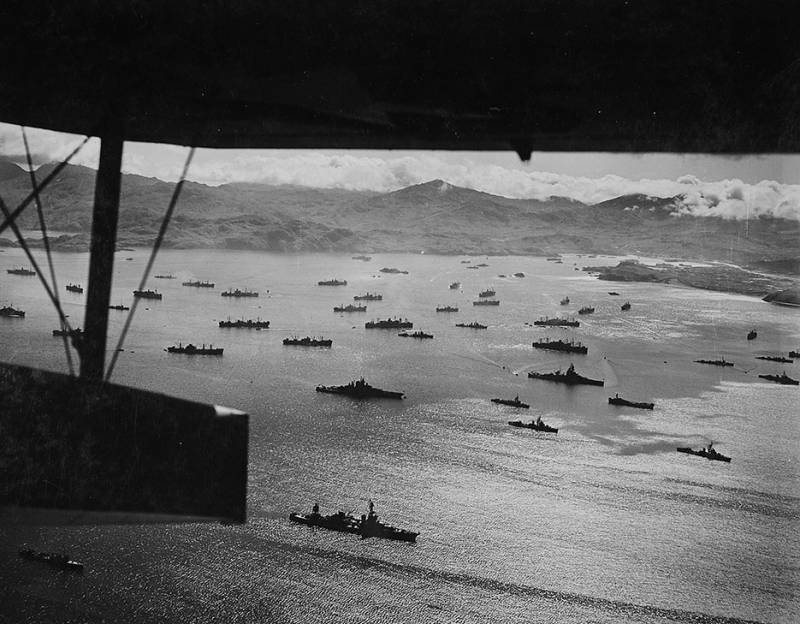 Ships and boats "Cottage" at about. Adak before going out to Kiska. Library of Congress Photo
The seizure of the southern Aleutian Islands threatened the mainland United States, and the American army immediately took action. The army's fleet and air corps carried out reconnaissance and identified enemy targets on the islands. Long-range bombers and naval artillery worked on them. There was also a hunt for Japanese transport ships. Starting in March 1943, the supply of the islands was carried out only by submarines, which hit the volume of traffic and the combat capability of the garrisons.

On May 11, 1943, the United States carried out a landing on the coast of about. Attu. The 7th Infantry Division, supported by three battleships, an aircraft carrier, surface ships and submarines, faced serious enemy resistance in well-fortified positions. The fighting continued until the end of May and ended with the liberation of the island. The US Army suffered heavy casualties - 649 killed, nearly 1150 wounded and over 1800 sick. All this affected the planning of further operations to liberate the islands. 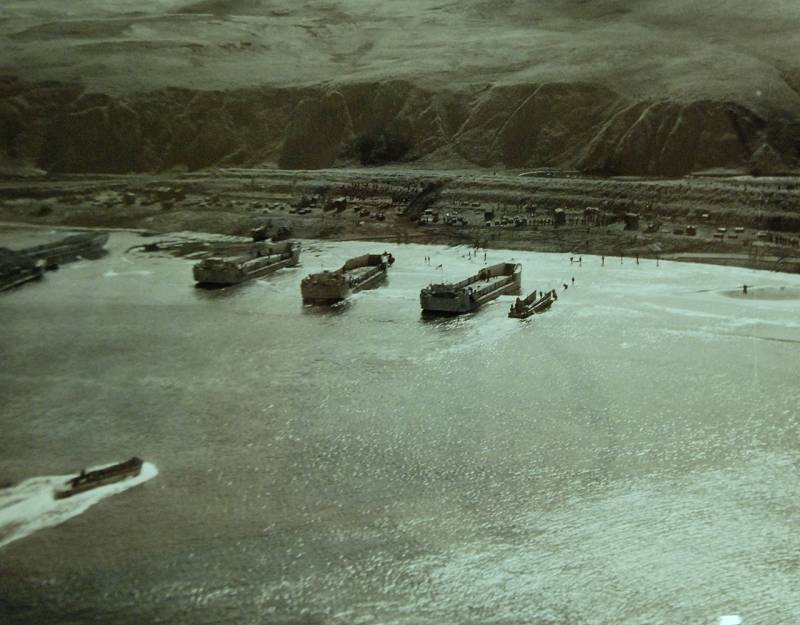 Landing boats off the coast. Photo National Museum of US Navy

On the eve of the landing

Having regained control of Fr. Attu, American troops began preparing the landing on Kyska. Active reconnaissance from the air was conducted, aimed at identifying all enemy positions. The preparation of new landing forces was carried out, taking into account the experience of the previous battle. Several infantry, mountain rifle and artillery regiments of the US and Canadian armies were to participate in the liberation of the island. The total number is over 30 thousand people. The landing and support was supposed to provide flotilla of 100 pennants.

At the end of July, the distant aviation The United States and warships have stepped up their bombing of targets on the island. Before the start of the amphibious assault, bombers unloaded over 420 tons of bombs over Kiska, and the ships used shells with a total mass of 330 tons.

At this time, the Japanese garrison about. Kiska included up to 5400 people. - military and civilian personnel. Even during the battles for Attu in the highest circles of Japan, there was an understanding that Kysku would not be able to defend. After disputes and mutual recriminations, on May 19, an order appeared to prepare for the evacuation of troops, but they did not rush to implement it. First of all, it was required to find and implement the safest way to withdraw troops through the blockade of the island. 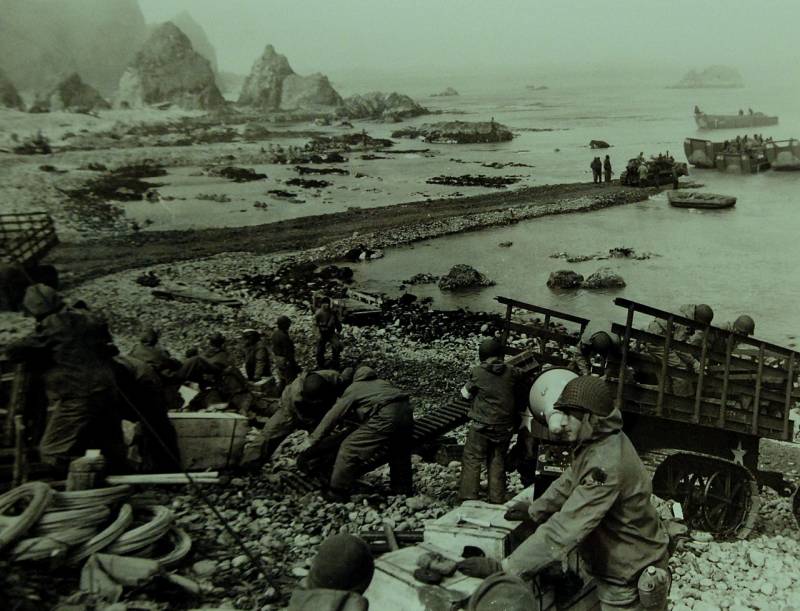 The disembarkation continues. Photo National Museum of US Navy
The evacuation began only on July 28, when the United States intensified shelling of the island. In the evening, hiding in the fog, several warships went through the blockade and ended up in the port of Kiski. In less than an hour, approx. 5 thousand people, and the ships went to about. Paramushir. The task of the remaining soldiers was to imitate the work of the garrison and air defense, prepare traps, etc. A few days later they were taken out on submarines. Of all the manpower on the islands, only a few dogs remained.

American intelligence believed that there were up to 10 thousand people on Kisk. and there is a developed network of fortifications. At the same time, it was noted that at the end of July the air defense had weakened, negotiations on the radio had become rare, etc. The theater command had a version about the evacuation of the enemy, but it did not receive full support. It has been argued that the Japanese remain on the island and prepare for defense, as was the case on Attu. 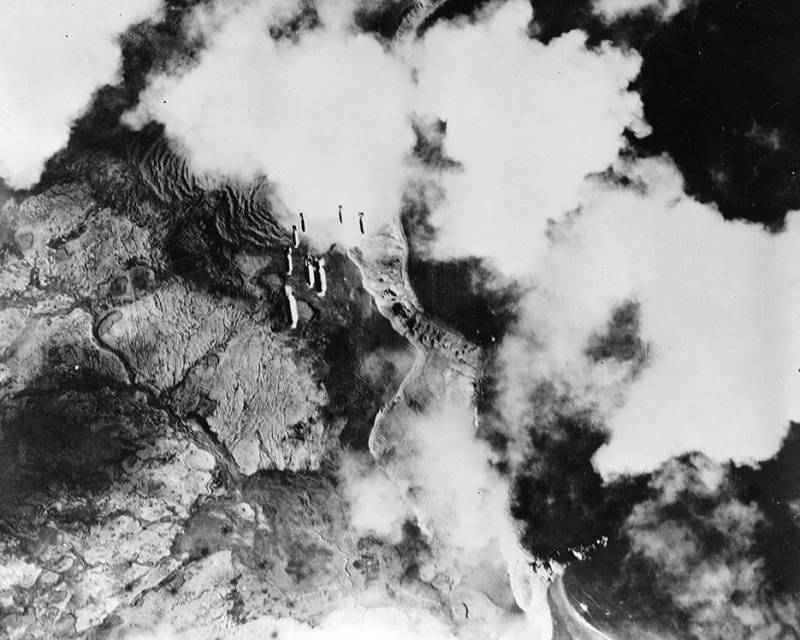 Long-range aviation bombing Japanese targets. Library of Congress Photo
As a result, it was decided to land amphibious assault forces, and the event was codenamed "Cottage". In the early morning of August 15, landing craft landed the first American and Canadian units. Due to adverse weather conditions and errors in forecasts, some of the landing craft ran aground and hampered the operation of other pennants. However, the speed of the landing did not matter - the first wave of the landing did not meet any resistance, and it became possible to concentrate the shock group on the shore.

By noon, the forward units in the fog reached the Japanese trenches, which were empty. As they moved further, the Americans occupied new dugouts and bunkers, but did not find an enemy. The battle did not begin, the situation remained tense. The first skirmish soon followed. American and Canadian soldiers advancing from different directions mistook each other for Japanese. A short battle began, during which 28 US Army soldiers and four Canadians were killed. Another fifty people were injured. 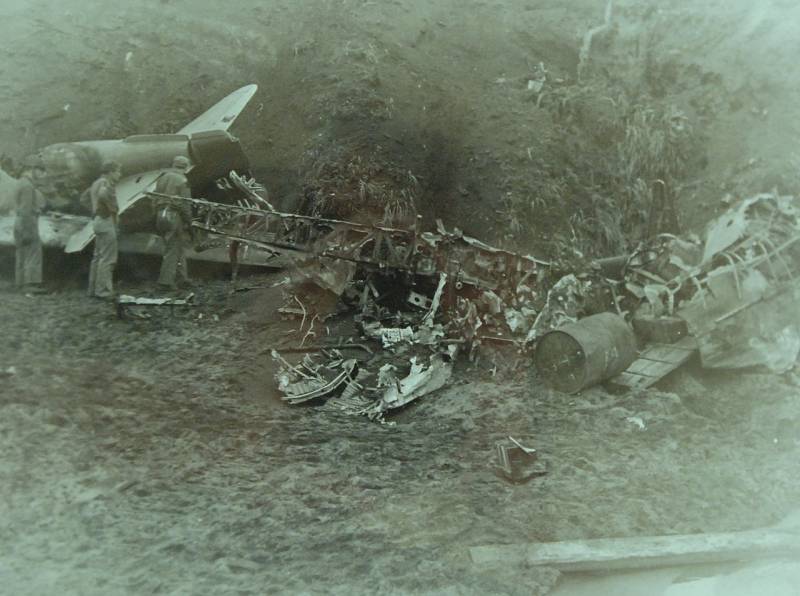 A broken Japanese fighter jet at the Kiski airfield. Photo National Museum of US Navy
The clearing of the island continued for several days. The mines left by the Japanese exploded regularly, and there were skirmishes between the allies due to the general tension, poor visibility and other factors. On the morning of August 18, the destroyer USS Abner Read (DD-526) was blown up by a mine in Kiski Bay. The explosion tore off the stern; 70 sailors were killed and 47 were injured. The losses of the ground group were also constantly growing.

On August 17 they occupied the main camp of the garrison, and soon after that it became clear that the enemy was not on the island. However, it was required to check all the existing trenches and bunkers, as well as identify mines and other traps. It all took several days. Only on August 24, the command announced the successful completion of the operation and the final liberation of the Aleutian Islands. 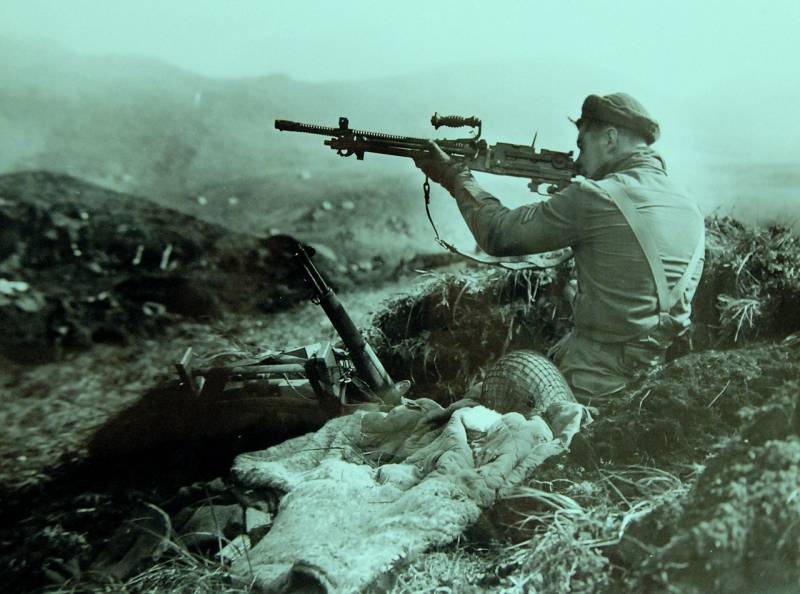 The evacuation was urgent: the Japanese even abandoned the weapon... Photo National Museum of US Navy
As a result of Operation Cottage, the United States regained control of Fr. Kiska. The cost of this was no less than 90-92 dead soldiers, marines and sailors. Another 220 people. received injuries of varying severity. The specific conditions of the island negatively affected the health of the soldiers, and 130 people. I had to be sent to the hospital with different diagnoses. The destroyer "Abner Reed" was towed away for repairs, and the landing fleet did not receive serious damage.

Considering Operation Cottage and the events that preceded it, it can be seen that the specific course of events and significant losses (in the complete absence of enemies) were associated with a number of characteristic factors that developed in the least successful way. 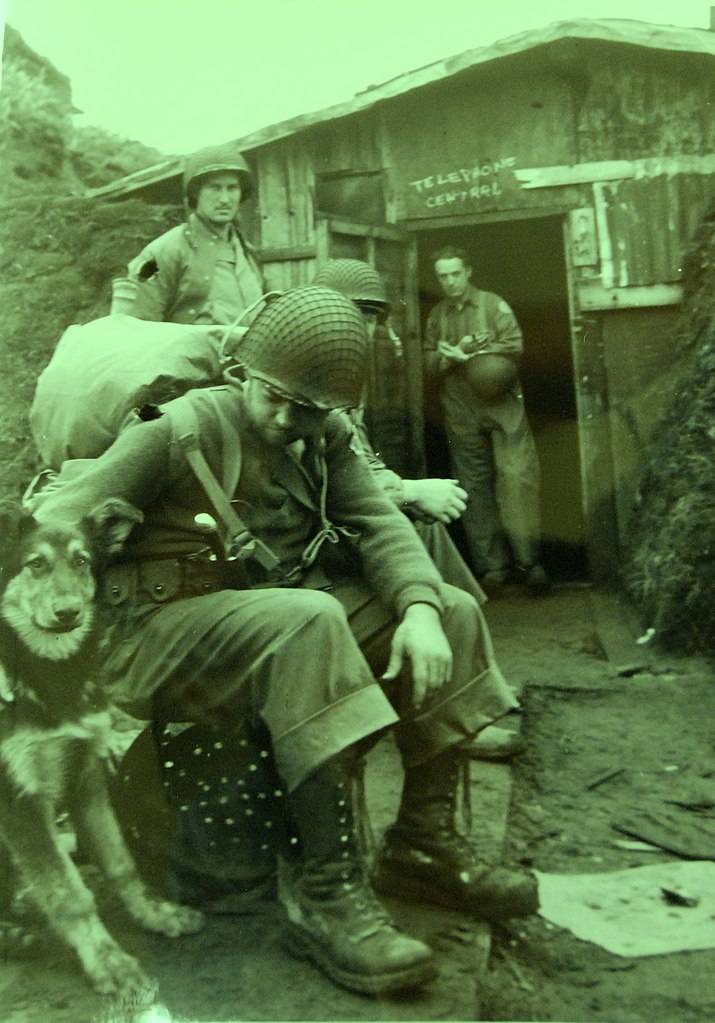 American soldiers outside the former Japanese telephone exchange. On the left is a Japanese dog abandoned by the owners on the island. Photo National Museum of US Navy
First of all, all the processes were negatively affected by the harsh climate of the Aleutian Islands. Fogs and precipitation interfered with the conduct of reconnaissance and the normal operation of surface ships, and together with the low temperature they became a threat to the ground forces. It was because of bad weather conditions that the American side was unable to detect the evacuation of the Japanese garrison and draw conclusions.

The next factor was the wrong assessment of the situation by the American command. Seeing signs of the absence of a garrison, it did not believe in the possibility of an evacuation and began to act on the assumption that a developed defense was being prepared. If the intelligence data on the absence of the enemy were confirmed, it would be possible to cancel the landing of the landing - and drastically reduce losses. 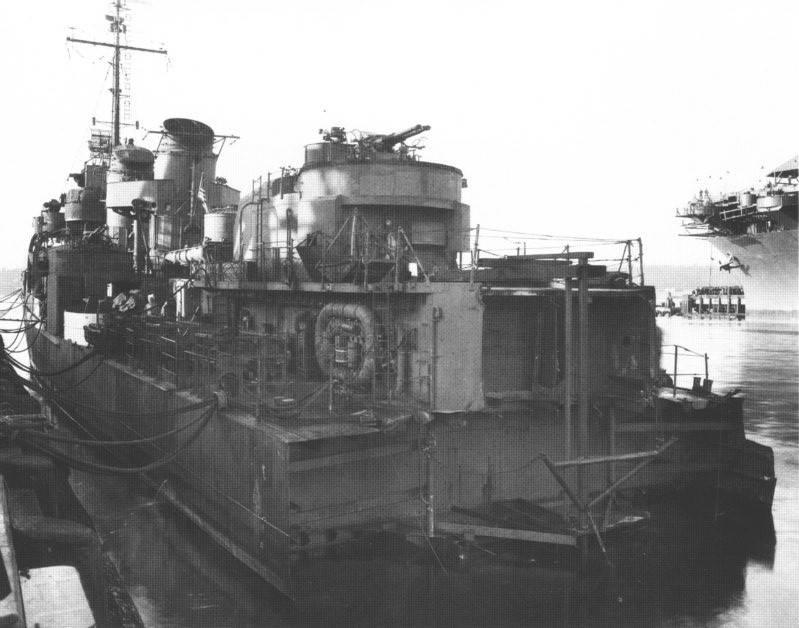 The destroyer USS Abner Read (DD-526) after being towed to port, October 1943. Photo by US Navy
After the landing, the difficulties of interaction between troops, aggravated by fog and precipitation, became a serious problem. With poor visibility, the fighters could mistake each other for the enemy, which ended in friendly fire, injuries and death. In addition, the enemy organized a mass of mine-explosive obstacles and mined all objects. Sea mines were planted around the island, one of them damaged the destroyer and killed 70 sailors.

Thus, we are talking about an unsuccessful combination of a number of factors - natural conditions, enemy actions and the American command's own mistakes. A change in any of these factors could seriously affect the development of the situation and the outcome of the entire operation. So, good weather would reduce the number of friendly fire, and the correct interpretation of intelligence data would make it possible to do without the landing. However, a scenario was possible in which the Japanese troops remained on the island, and then the losses of the United States would be several times higher.

During World War II, the US Army conducted numerous amphibious operations in the Pacific Ocean, during which it fought Japanese troops in different conditions. For several years of war, only once had to "liberate" an island abandoned by the enemy. First of all, this means that the Cottage operation is faced with an extremely rare set of circumstances. It was this “perfect storm” that influenced the course and results of the operation, and also provided it with dubious fame.

Ctrl Enter
Noticed oshЫbku Highlight text and press. Ctrl + Enter
We are
Operation "Cottage" - the most curious American failure in historyThe mystery of the operation "Cottage"
15 comments
Information
Dear reader, to leave comments on the publication, you must to register.