Killed at Mtsensk. In the forty-second 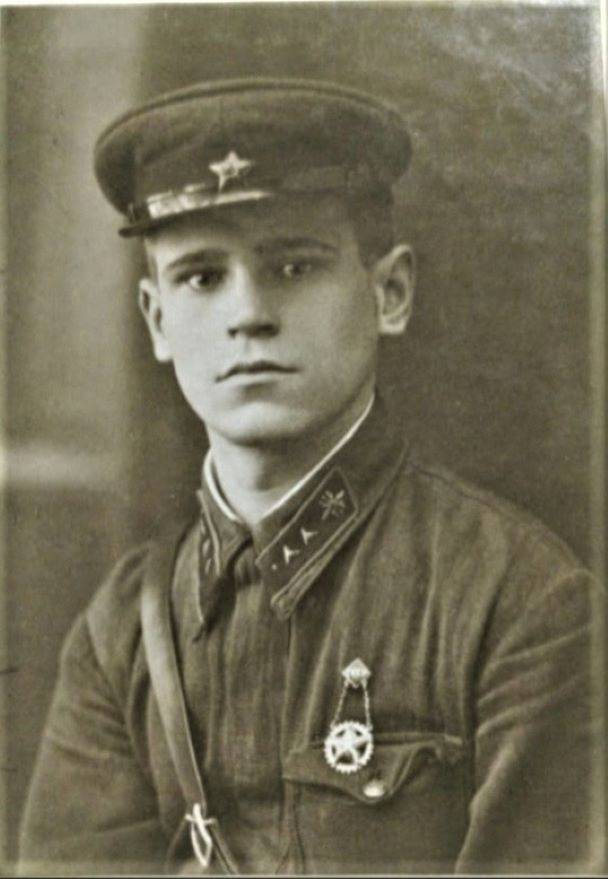 After all, this is how the great Suvorov taught us.


The usual autumn Saturday of 2020 with light hints of rain has become not quite usual for residents of the Nagoryevsky territorial administration of the Pereslavsky district of the Yaroslavl region.

Recall all by name

On this gloomy day in the morning, at the quiet Nagoryevskoye cemetery, the last preparations were made for the solemn ceremony of burying the remains of the senior political instructor of a separate reconnaissance company of the 287th rifle division Mikhail Nikolaevich Torgov.

Setting up the equipment, orchestra members, guard of honor, the route of the funeral procession from the Church of the Transfiguration of the Lord to the cemetery, the arrival of delegations from the Oryol region, Yaroslavl, Pereslavl-Zalessky ...

All this, like many other things, is under the control of the head of the Yaroslavl regional branch of the public organization "Combat Brotherhood" Oleg Koshelev. How many he had already seen off here on his last journey, including after Afgan, and after Chechnya, but this has not happened yet ...

One after another, cars and buses drove up to the Nagoryevsk Church. It seems that everyone arrived: the head of the urban district of Pereslavl-Zalessky Valery Astrakhantsev, the military commissar of the city of Pereslavl-Zalessky and the Pereslavl region Alexander Avdeichik, chairmen of the Orlovsky and Yaroslavl regional branches of the "Search Movement of Russia" Sergey Shcherbaty and Marina Makarova, the head of the Nagoryevsky territorial administration Irina Golyakova, Andrey Palachev, head of the Russian Paratroopers' Union for the Yaroslavl Region, together with his students, representatives of military units and military-patriotic clubs.

A funeral service for the deceased intelligence officer was held in the church. As the head of the Nagoryevsky territorial administration Irina Golyakova said, Mikhail went to war with his father Nikolai Torgovy in 1941. 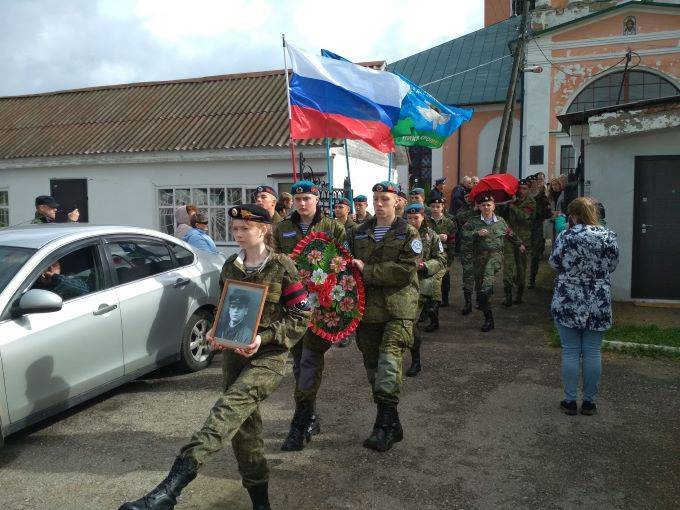 Seeing them off on a long and dangerous road, mother Glafira Gavrilovna advised the men to drive the Nazis all the way to Berlin and destroy everyone, so that no one else would be discouraged to meddle on Russian land.

They fulfilled the mother's order

The soldiers carried out their motherly orders sacredly, fought with the adversaries, as befits, bravely, only now the father died in July 1942. A little over a month later, on the night of August 25-26, 1942, during a deep raid on the fascist rear on the Mtsensk land in a battle near the village of Somovo-First, an enemy bullet also stopped the life of Mikhail Torgov.

In September 1942, Glafira Gavrilovna received two funerals at once with the terrible news of the death of her husband and son. The brave scout was posthumously awarded the Order of the Red Banner. The senior political instructor was buried on the territory of the Spassko-Lutovinovsky rural settlement in a mass grave along with 300 commanders and soldiers of the 287th rifle division.

The 287th Infantry Division was formed twice, after a difficult exit from the encirclement, it, pretty shabby, took a fight with the Germans, who were rushing to Moscow from the south, from near Orel and Tula.

Here, as part of the 3rd Army of the Bryansk Front, the newly formed division had to stay for a long time. She again entered the battle on February 4, 1942, north of the very city of Mtsensk, where she then fought stubborn and protracted defensive battles with superior enemy forces. Here, on the Oryol land, the father and son of Torgovy laid down their heads. 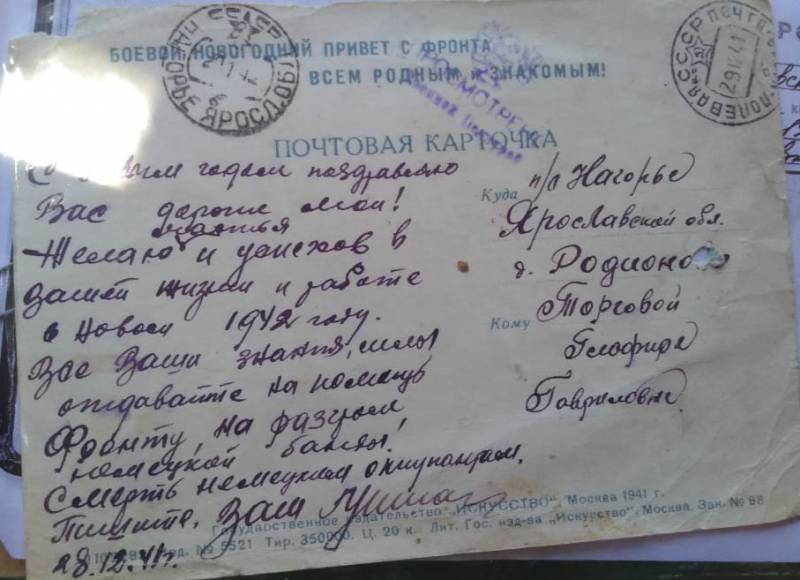 His first and last New Year card sent home from the front
The division continued its combat path through Soviet territory, through Poland, Germany and Czechoslovakia without them. The 287th division became twice Red Banner, received the glorious name of Novograd-Volynskaya and the Order of Bogdan Khmelnitsky.

The glorious connection ended the war in Berlin and near Prague. In the 287th division, as in many other units and formations, there are still those who are listed as missing. It was also possible to learn a lot about Mikhail Torgov only decades after the great Victory.

The search engines of the Oryol military-historical club “Battalion” managed to establish the name of Mikhail Torgov by accidentally found a dilapidated medallion.

Bit by bit, already in Moscow in a specialized laboratory, the contents of the invaluable information found were restored. So it turned out that Mikhail Nikolaevich was born in 1918 in the village of Rodionovo, Nagoryevsky District, Yaroslavl Region.

Long, very long was the last journey home of the defender of the Russian land, fearless scout Mikhail Torgov. Relatives have been waiting for this day for 78 years. But my mother and sisters did not wait. They are buried at the same Nagoryevsky cemetery. All together they will now rest in their native land.

Meeting. Unexpectedly for everyone, gloomy clouds cut through the bright rays of the sun. One by one the speakers change at the microphone: Valery Astrakhantsev, Alexander Avdeichik, Marina Makarova, Sergei Shcherbatyi, Andrey Palachev, Oleg Koshelev.

It's hard to say, many already have tears in their eyes ... It's not in vain, as you can see, the song is sung: “Although I was not familiar with the guy who promised“ I'll be back, Mom! ”

Amid farewell volleys, the coffin with the remains of the military commissar of the 317th separate reconnaissance company of the 287th rifle division Mikhail Torgov slowly sinks into the grave. A pinch of Orlovskaya earth, poured from a bag, is mixed with Nagoryevskiy sandy-clay grains.

What is it sometimes different, Russian land. Spruce branches, wreaths and live scarlet carnations lie on the grave mound. 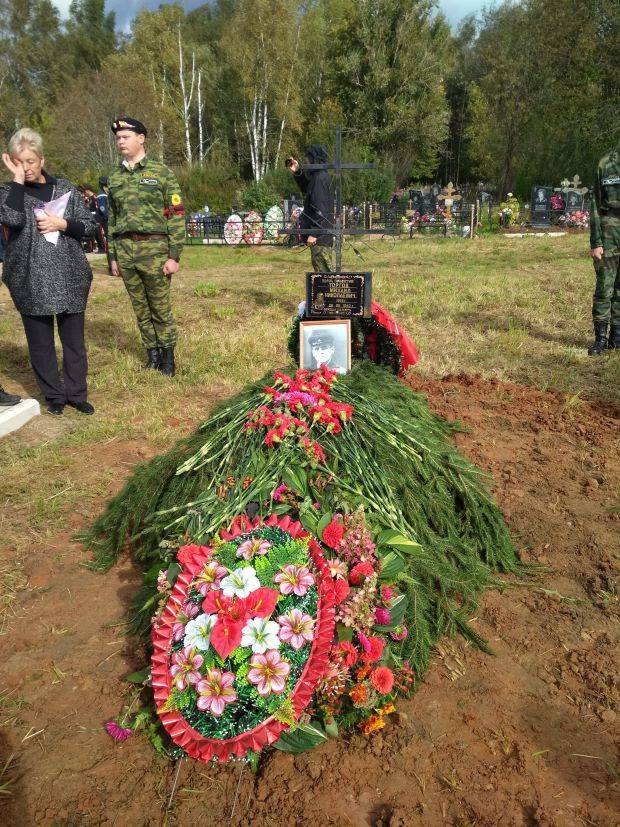 The difficult painstaking work of the Oryol and Yaroslavl search engines is coming to an end. Thanks to their efforts, another defender of the Fatherland who died in the heat of the Great Patriotic War was buried, as expected, in his native land. Eternal memory to Mikhail Nikolaevich Torgov!

In the year of the 75th anniversary of the Victory, young boys and girls from military-patriotic clubs who took part in the solemn ceremony of reburial of the remains of the hero of the Nagoryevsk land are equal to his feat. All of them have matured today and will remember this day for the rest of their lives!

It is impossible not to add to the written that just a few days after the reburial in Nagoryev at a mass grave in the village of Verkhnyaya Zaroshcha (Butyrki), 103 more soldiers and commanders of the 287th division, found during the search work in 2019-2020, were reburied in the Oryol region biennium together with the senior political instructor Mikhail Torgovy.

Ctrl Enter
Noticed oshЫbku Highlight text and press. Ctrl + Enter
We are
Chernobyl notebook. Part of 3Congratulations on the 285 anniversary of the birth of the Great Russian commander Alexander Vasilyevich Suvorov!
Military Reviewin Yandex News
Military Reviewin Google News
17 comments
Information
Dear reader, to leave comments on the publication, you must to register.