An hour-long truce. The war in Karabakh takes on a completely different character 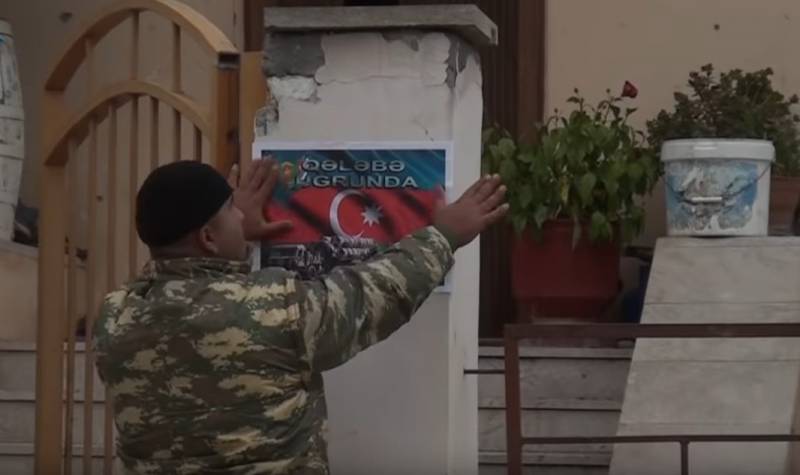 The war in Nagorno-Karabakh has entered its final phase. I would say that military actions did not show anything original. A predictable war with a predictable result in general and unpredictable due to the actions of one of the leaders of the opposing sides. Moreover, today one can already feel a certain aloofness of the leading world powers from this war. Duty calls for negotiations, duty deep regrets, duty words of support.


Why am I so sure that the war has entered its final phase? Yes, simply because the hostilities have acquired the character of a strategic confrontation with the use of heavy weapons. Rockets, large-caliber artillery, flamethrower systems and MLRS are precisely the indicator of the transition from tactical schemes to strategic plans and operations.

Changing the nature of war

I will not talk about which mountain, pass, village or valley one or another side captured. First, no one has precise data on specific battles along the entire front line. And I have no access to the means of objective control. And secondly, today the advances and retreats of the sides are no longer particularly important. The war was different.

The superiority of Azerbaijan, its preparation for war, the accumulation of resources and the development of strategic plans for the operation are obvious even to non-professionals. Armenia was preparing for the last war. This is evidenced by well-equipped engineering structures in the security zone. The strategy of the Armenian army was to prevent the enemy from entering the territory of Karabakh.

After the defense was broken, the Armenians found themselves in a difficult position. Remember the shots of the destruction of artillery, tanks, BMP and other objects by drones of the Azerbaijani army? Didn't you have a strange feeling of complete disregard of the commanders of the Armenian army for elementary things for any military, like masking an object?

It is clear when a car, tank, armored vehicle, self-propelled guns are on the march. Given the terrain, it is really difficult to mask such objects. Therefore, the defeat of tanks or infantry fighting vehicles looks logical. What about artillery positions that are not masked? What is the attitude to the tent cities of the Armenian army, which simply attract the eyes of the enemy?

According to the information that both sides are spreading about the losses of the opposing side, both armies have already lost a huge amount of equipment, weapons and personnel. It is clear that these data cannot be trusted. And the parties do not talk about their losses. But according to what is shown in the agitation of the parties, it can be concluded that the losses of Armenians are significantly higher than the losses of Azerbaijanis.

So, in order to understand what is happening now, it is necessary to remind the goals of this war for both sides. Azerbaijan wants to liberate its own lands, which Armenia has turned into the security zone of Artsakh. And, continuing the offensive in case of successful completion of the first task, liberate the entire territory of the Nagorno-Karabakh Autonomous Region. At the same time, Baku is not going to cross the border of Armenia, so as not to provoke retaliatory measures from Russia.

Armenia is trying with all its might to preserve the Armenian Artsakh and those seven regions of Azerbaijan, which make up the security zone. Legally, Armenia is not right in this situation. But this does not stop anyone in Yerevan. Over the years that have passed since the end of the previous war, the Armenians have become accustomed to the idea that Karabakh, albeit unrecognized even by their state, is Armenian. And the occupied regions of Azerbaijan also belong to Artsakh.

What is written above are common truths that are repeated daily in different media. But one very important task for the Azerbaijani army follows from them. Locals! Yes, those who today consider this land theirs. Those who once conquered it in battles.

It was the fulfillment of this task that changed the nature of the war. Many have noticed the fact how methodically, but at the same time, artillery works out in the villages and towns of the NKR. One or two shots, destruction or damage to a building with minimal casualties among the population, and silence. The next day the situation repeats itself. At the same time, no progress of the Azerbaijani army is observed.

What for? When analyzing the balance of forces of the parties, it becomes clear that no heroism and staunchness of the fighters of the armies of Armenia and Artsakh will stop the Azerbaijani army if it starts an offensive. The infrastructure allows Baku to transfer units quickly enough. The enemy does not have such an opportunity. But the offensive begins only after certain events in the village.

And this event is the evacuation of most of the civilian population! Baku is deliberately delaying the offensive, ensuring the exit of the civilian population from the combat zone. Humanism? Hardly. From those frames and those reports that break through the information blockade, one can draw a conclusion about rather dirty methods of warfare. But we will know for sure about this only after the end of hostilities.

Everything seems to me to be much more complicated and simpler. Baku does not need those civilians who live there now. Firstly, it is the overwhelming majority of Armenians, who in any case will maintain ties with their compatriots, which means, quite possibly, will become a breeding ground for a possible partisan movement in the NGO.

Secondly, Armenians living in NKR today occupy lands and houses that once belonged to Azerbaijanis. It is clear that after the victory of Baku, those who were once expelled from their land will return and drive out the invaders. Therefore, there are no guarantees that this will not result in another massacre. Mutual hatred reached its climax in this war.

So, what is the character of the war in Karabakh today? This is a war not only and not so much for the territory of Karabakh as for the cleansing of these territories from the Armenians living there. This is a war for the settlement of the autonomous region with Azerbaijanis and the final solution of the NKR issue in this way.

Most of us are convinced that an external enemy always contributes to the consolidation of the nation, which ultimately leads the nation to victory. At the same time, we forget the second result of this consolidation. The nation either wins or dies! Alas, this fact cannot be denied. It all depends on the enemy the nation is currently fighting against.

Yerevan today is stubbornly pushing the Armenian state towards self-destruction. They understand that the war has been lost. As well as the fact that the continuation of this massacre will lead to senseless losses and complete destabilization of the country's economy. I'm not even talking about the deaths of many young people necessary for the country.

The option of ending the war through negotiations was quite acceptable to both sides. A truce, the transfer of the bodies of the dead and the exchange of prisoners, in parallel negotiations on the division of Karabakh. Yes, Yerevan would have to give not only seven regions of Azerbaijan, but some part of Karabakh, but receive in return peace and the rest of Artsakh. Moreover, Baku, as it seems to me, would even go to recognize this part of Armenia.

But what happened after the meeting of the foreign ministers in Moscow? An hour-long truce! .. And new, even more fierce battles. Battles that practically deprive Armenia of any chances of keeping at least part of Artsakh under its control. Yes, today you can argue about who broke the truce. But, as it seems to me, no one needs it anymore. Both sides are convinced that the enemy did it. And it will be almost impossible to convince them.

I think that if there is political will on both sides, one can find the culprit for the breakdown of the agreement with the help of objective means of control, and Russia has enough such means in this region. In this case, both the USA and China could share the data of their satellites.

I did not want to raise the topic of relations between modern Armenia and Russia during the war. But what the Prime Minister of Armenia is doing today causes indignation to such an extent that it is simply impossible to keep silent about it. In an effort to change the country's political course, the government is going to outright kill its citizens in this war. Instead of making every effort to end the bloodshed.

Conclusion. To be continued

For several days I heard talk about downed attack aircraft, about attacks by attack aircraft under the cover of Turkish F-16s. The experts argued, quoted from various sources. The feeling was that the two states were participating in different wars. Armenians shoot down a plane, planes are being used on them, and Azerbaijanis say that they have planes in hangars.

Is it difficult to ask military pilots? Asking if there are idiots among aviation commanders of Azerbaijan, who in such a terrain and with such saturation of air defense would order their pilots to carry out raids? Drones do a great job with this.

What's next? Not in the sense of information stuffing, but in general on the war between Armenia and Azerbaijan. Further, Baku will bring the situation to its logical end. Will squeeze out civilians from NGOs. Will grind the army of Artsakh and Armenia with long-range artillery and drones. And as the civilian population will leave for Armenia, liberate the territory, the Azerbaijani army will occupy the villages and cities of Karabakh.

Armenia's resources will melt before our eyes. The country will rapidly become poorer and eventually turn into a kind of Ukraine. There are many ambitions in the absence of opportunities to realize them. Continuing the course of Europeanizing the country and rejecting an alliance with Russia is precisely this path.

And again Russia will be in charge of the situation. Or won't it? ..

Ctrl Enter
Noticed oshЫbku Highlight text and press. Ctrl + Enter
We are
Situational analysis of the death of the MH17 flight (Malaysian Boeing 777), made on the basis of engineering analysis from 15.08.2014Results of the week. “In our cooperative, the board is always agreed”
Military Reviewin Yandex News
Military Reviewin Google News
99 comments
Information
Dear reader, to leave comments on the publication, you must to register.