Project "Baikal". Modern replacement for An-2 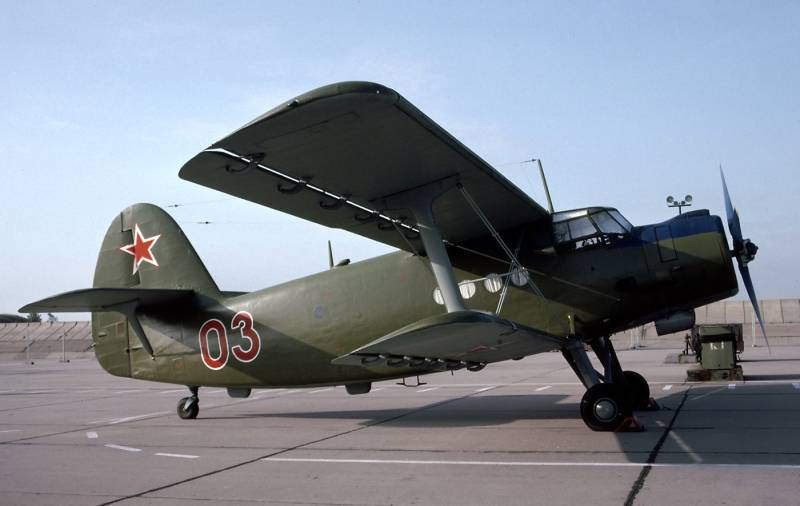 At present, hundreds of An-2 light multipurpose aircraft (LMS) remain in operation. With all its advantages, this technique is morally outdated, and in addition, most of the machines will soon run out of service. For many years, the issue of replacing these aircraft has been worked out, but real results are still lacking. Since last year, in order to replace the An-2, a new project of the LMS "Baikal" has been developed.

Modern история creation of a replacement for the An-2 begins with the work of the Siberian Research Institute aviation them. S.A. Chaplygin (FGUP SibNIA). In the recent past, the institute presented several projects of the TVS-2 family, which provided for a deep modernization of the original machine.

Initially, it was proposed remotorization using turboprop engines, and then it came to rebuilding the airframe and other major changes. So, in the last TVS-2DTS project, a completely new composite airframe was used, which retained only an external resemblance to the basic design. According to the TVS-2AM / MS / DT / DTS projects, a small series of aircraft was built, most of which remain in operation.

In early 2019, the Ministry of Industry and Trade revised plans to create a new LMS. SibNIA projects were considered unsuccessful due to the high share of imported components, excessive complexity and incomplete compliance with airworthiness standards. As a result, a new competition is being held for the development of a promising aircraft with the code "Baikal". 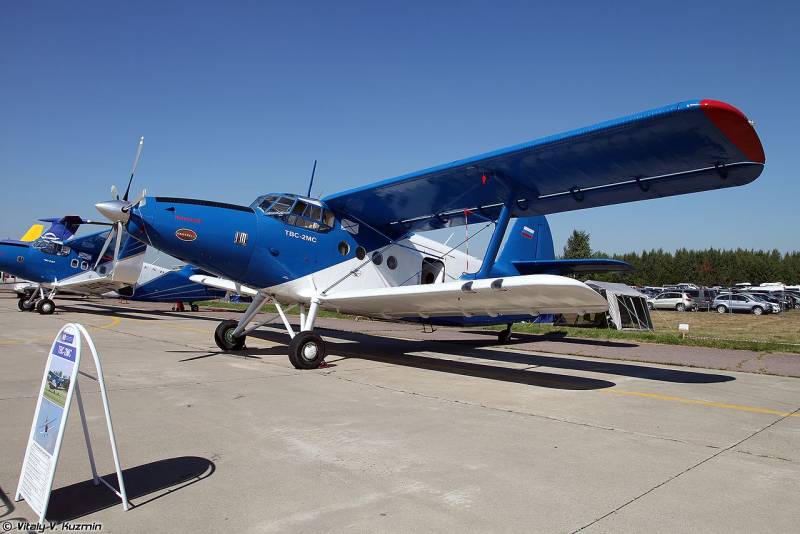 Turboprop composite aircraft TVS-2MS. Photo Vitalykuzmin.net
In September, the Ural Civil Aviation Plant (UZGA) became the winner of the competition. However, just a few days later, the results of the competition were canceled, and then the contract was transferred to a subsidiary of UZGA - LLC Baikal-Engineering. The corresponding contract is worth 1,25 billion rubles. was signed on October 17, 2019.

Under the terms of last year's contract, no later than December 2020, the development company had to submit technical documentation and the first prototype for static tests. Then a flight prototype had to be built; tests of experimental equipment were scheduled for 2021. In the next 2022, they were going to carry out certification, and in 2023 serial production may begin.

At the end of February this year, it became known that the UZGA would be engaged in the construction of an experimental LMS "Baikal". By that time, the plant had completed a mock-up of the cockpit, which received the customer's approval. At the same time, some of the technical features of the project were revealed, showing the main approaches to development. Later it became known about the development of a new turboprop engine specially for "Baikal".

New information about the construction appeared in early October. According to the Ministry of Industry and Trade, the first experienced LMS will be submitted for testing within the next few weeks. The checks will be carried out on the basis of the Moscow Aviation Institute.

The proposed appearance of the LMS "Baikal". Graphics "Baikal-Engineering" / UZGA

There are several basic requirements for the LMS "Baikal" project. So, the car should be made from domestically produced units. The passenger cabin must accommodate 14 people. or 1500 kg of cargo and maximally repeat the configuration of the An-2 cabin. You also need the ability to re-equip the aircraft to perform different tasks. The cruising speed was set at 300 km / h, the flight range with normal cargo was at least 1500 km.

The aircraft must operate at temperatures from -50 ° C to + 55 ° C and use unpaved airfields. The maximum take-off / run length is 200 m. With the basic composition of on-board radio-electronic equipment "Baikal" should operate up to 73 ° north latitude. The cost of the car was limited to 120 million rubles, the cost of a flight hour - 30 thousand rubles.

Taking into account such requirements, "Baikal-Engineering" offers a turboprop all-metal monoplane with a high wing. The airframe is made of aluminum alloys, which reduces the cost and labor intensity of its manufacture, and also provides an advantageous combination of operational and technical characteristics. Composite units were abandoned due to the high complexity of manufacturing and repair.

The new "Baikal" will be a monoplane. By abandoning the second wing, it was possible to reduce the weight of the structure to the required level without loss in flight performance. In the published images, the wing has a rectangular center section and consoles with a slight sweep. The struts were used, partially unloading the center section. 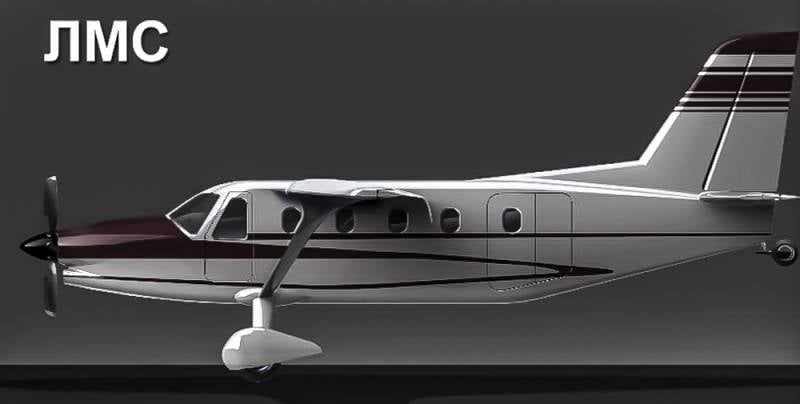 Side view. Graphics "Baikal-Engineering" / UZGA
LMS will be equipped with a VK-800S engine with a capacity of 800 hp. and an AB-410V propeller. Until the appearance of a finished engine, the use of foreign motors with suitable parameters is not excluded. To simplify remotorization, uniform attachment points are used.

The fuselage of "Baikal" was able to accommodate a passenger compartment with a length of 4,9 m and a width of approx. 1,5 m and 1,67 m high. The door for boarding people or delivering goods is located on the left side in the tail. For greater ease of landing, the floor behind it is made inclined: the aircraft in the parking lot raises its nose, and such a floor is in a horizontal position, facilitating boarding or loading.

The issues of improving safety are being worked out. Thus, the aircraft can receive two standby electric motors with a capacity of 100 kW. If the main power plant fails, they will allow flight and landing. The possibility of installing a parachute system capable of providing a safe landing for the entire aircraft is also being considered.

The length of the future "Baikal" will be at the level of 12,2 m with a wingspan of 16,5 m and a height of 3,7 m. The maximum take-off weight is 4,8 tons. Flight performance and other characteristics meet or exceed customer requirements.

The main task of the LMS "Baikal" project is to replace the An-2 aircraft that are still in operation and are close to the end of their service life. In addition, such a technique will be able to squeeze out newer samples of close classes, incl. foreign production.

"Baikal" in flight. So far, only in the picture. Graphics "Baikal-Engineering" / UZGA
According to calculations, in the first five years after certification, the potential demand for LMS can reach 220-230 units. It is not known what part of such market needs will be covered by Baikal, but there is every reason for optimism. In addition, it is obvious that after the end of this period the demand for "Baikals" will remain and may lead to new orders.

However, so far we are talking only about calculations and plans. The signing of real contracts for the supply of equipment has not yet been reported. Apparently, orders for "Baikal" will appear only after the start of tests or later - when it will be possible to assess the real capabilities of the aircraft and draw the main conclusions.

Soon, static tests of an experienced glider will begin, and already in 2022-23. promising "Baikal" can go into series. It is expected that such an aircraft will find its place in regional transportation and replace outdated equipment. However, the experience of recent decades shows that it is quite difficult to create a replacement for the old, but still relevant An-2.

An-2, developed in the late forties, was quite simple and cheap to manufacture, which made it possible to build it in a large series. The plane with this or that equipment could carry people and cargo, carry special equipment, etc. An-2 presented minimal infrastructure requirements. The work could be carried out from small unpaved airfields, and regular maintenance and minor repairs did not require the involvement of aircraft repair enterprises. All this contributed to the widespread use of such aircraft and active operation in various fields. 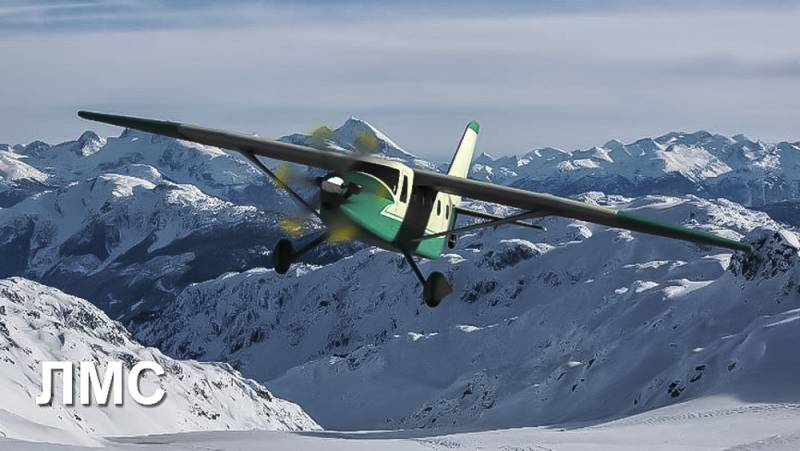 LMS will be able to work in different conditions. Graphics "Baikal-Engineering" / UZGA
In the future, aircraft construction technologies developed, but simultaneously with the characteristics of aircraft, the cost of construction and operation grew. As a result, the creation of a modern LMS with parameters at the An-2 level is a very difficult task. All difficulties of this kind are shown by the history of TVS-2 projects from SibNIA. With important advantages, this technique turned out to be disadvantageous for mass production and use.

The new Baikal project is being developed not only using modern technologies and components, but also taking into account previous failures. This increases its chances of successful completion and entry into service. However, the results of the project are still unknown. The first conclusions can be made only after the start of the tests, scheduled for next year.

Ctrl Enter
Noticed oshЫbku Highlight text and press. Ctrl + Enter
We are
In Russia, looking for a replacement for "Corn"An-12 in Afghanistan
162 comments
Information
Dear reader, to leave comments on the publication, you must to register.