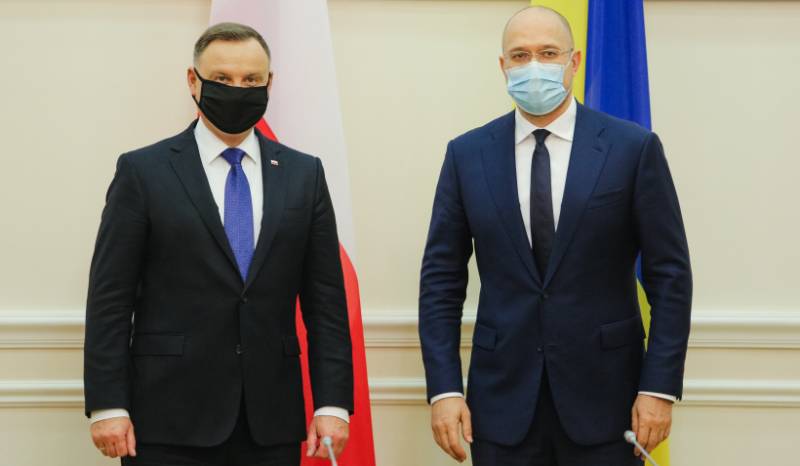 During a meeting in Kiev, the Prime Minister of Ukraine Denis Shmyhal proposed to the President of the Republic of Poland Andrzej Duda to expand the format of the Lublin Triangle platform, created at the initiative of Ukraine and including, in addition, Poland and Lithuania.


It is reported that before the start of the current protests in Belarus, Ukrainian Foreign Minister Dmitry Kuleba held a telephone conversation with Belarusian Foreign Minister Vladimir Makei and invited him as an honored guest to a meeting of the foreign ministers of Ukraine, Lithuania and Poland. At the meeting between Shmygal and Duda, they discussed a possible summit of the heads of the three countries of the "Lublin Triangle", where, apparently, it is supposed to discuss the issue of the development of the current format and its expansion at the expense of Belarus.

It is also reported that Shmygal expressed gratitude to Duda for his support in the process of involving Ukraine in the Trimorie project and said about his country's interest in joining cooperation within the framework of this initiative, actively promoted and supported by the United States.

In addition, at the meeting, they discussed the development of transport infrastructure, in particular, the implementation of the "Via Carpathia" project.

Shmygal said that the government of Ukraine considers the construction of concession roads in the format of the President's project "Big Construction" as one of the priorities in its work. In addition, according to Shmygal, Ukraine considers it important to develop a joint transit potential, namely to increase the quota for Ukrainian carriers. He expressed confidence that from next year Ukraine will be able to "jointly implement the first such project - the extension of the A4 highway to the territory of Ukraine."

Shmyhal noted that "the Ukrainian-Polish intergovernmental commission can become a platform for processing these issues and developing common potential."

So far, nothing is known about the reaction of the official Minsk to this proposal of Kiev.

The Lublin Triangle is a trilateral platform consisting of Ukraine, Poland and Lithuania for political, economic and social cooperation between them, which provides for regular meetings of the foreign ministers of these countries.

Trimorie is an initiative of states located between three seas - the Black, Baltic and Adriatic - with the aim of strengthening infrastructural ties between the countries of the region in the interests of improving economic cooperation, attracting investment, positioned as a purely pro-European project.

Ctrl Enter
Noticed oshЫbku Highlight text and press. Ctrl + Enter
We are
Rzeczpospolita in a modern format: why the Lublin Triangle is being createdYuri Drozdov: Russia prepared the role of the sacrificial calf
94 comments
Information
Dear reader, to leave comments on the publication, you must to register.